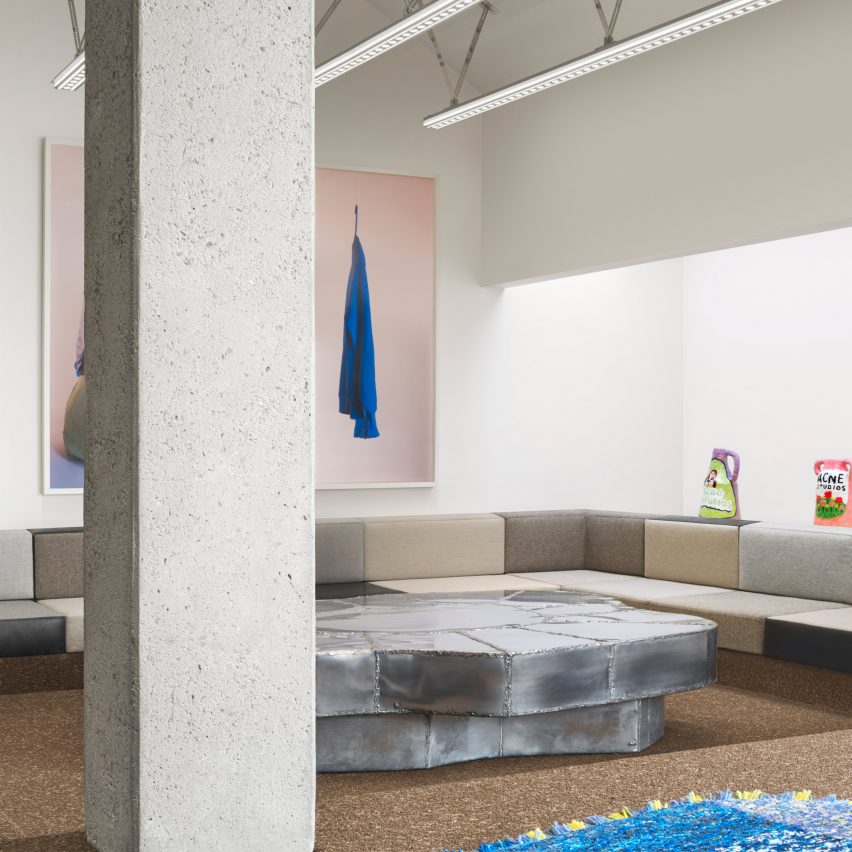 A 1970s brutalist-style building in Stockholm is now home to Acne Studios‘ headquarters, which is decked out with furnishings by Max Lamb and huge wall-hangings by Daniel Silver.

Acne Studios‘ headquarters – which has been monikered Floragatan 13 after the street it’s located on – takes over Stockholm’s former Czechoslovakian embassy.

The building was erected in 1972 by Czech architect Jan Bočan, but has now been transformed by the brand’s in-house design team and Johannes Norlander Arkitektur to have a “fashion-school atmosphere” where new ideas are encouraged.

The focus on creativity is also meant to reflect the meaning behind the acronym that informed the brand’s name, ACNE: Ambition to Create Novel Expressions. 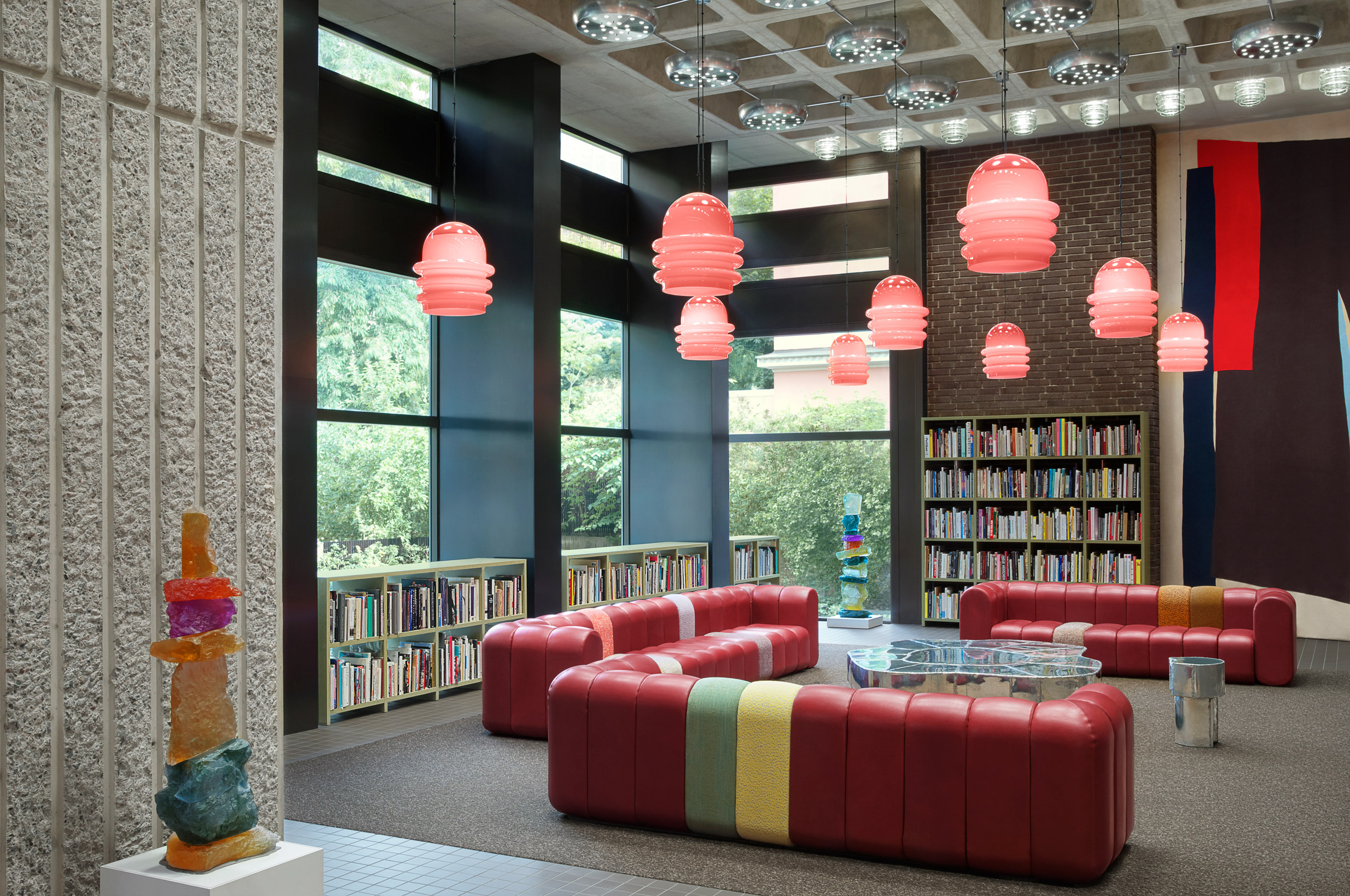 “When we started looking for a new building, I made a sketch of the way fashion design works,” said Acne Studios’ creative director, Jonny Johansson.

“I wanted the arteries of fashion to flow, with a building that captures the feeling of constant progress, of an experimental place,” he continued.

“Acne Studios is always evolving, and I want this space to evolve with us. We will continue to add details in the months and years ahead. I believe design is alive, whether it’s fashion or interiors.” 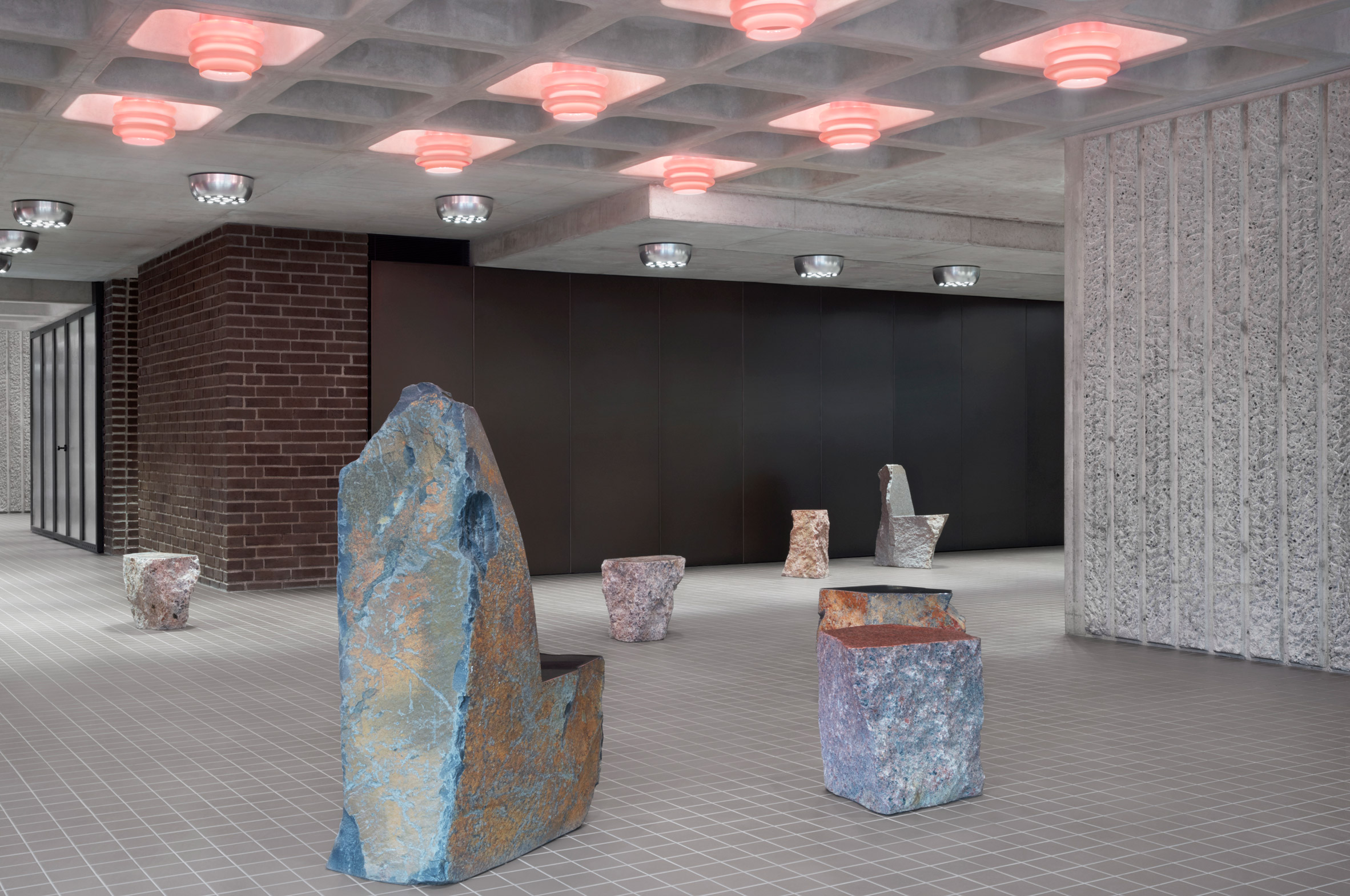 The ground level of the building plays host to an expansive library filled with art and fashion books, which staff members can flip through when in need of inspiration.

Dotted throughout are a number of tubular red-leather sofas, parts of which have been upholstered in contrasting fabrics.

Glass pendant lamps by French lighting designer Benoit Lalloz dangle from the ceiling, completed in a deep-pink hue that “brings softness” to the surrounding concrete surfaces. 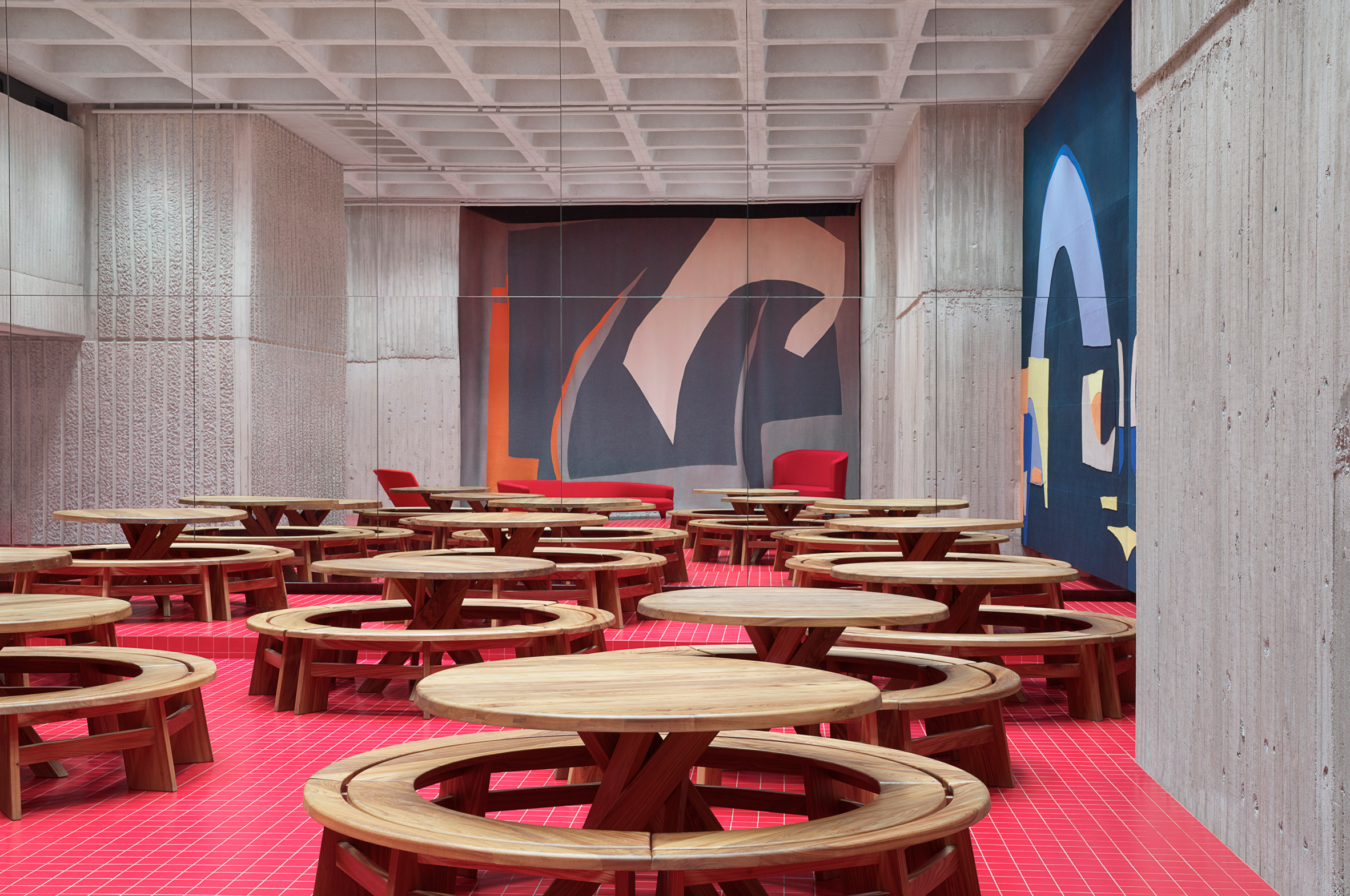 At the centre of the room is an organically-shaped silver table by British designer Max Lamb, who furnished Acne Studios’ store on New York’s Madison Avenue back in 2016.

Lamb has also used craggy blocks of stone to craft a series of chairs for the building’s lobby, where select pieces from Acne Studios’ clothing collections will be displayed like artworks in a gallery.

Four floors of the building have been dedicated to the design and production departments, while the staff canteen is set within the embassy’s old cinema room.

Here there are a couple of floor-to-ceiling wall hangings by London-based artist Daniel Silver, composed from abstract offcuts of surplus Acne Studios fabric.

Meetings can take place in the sixth-floor boardroom, which features a sunken sofa and fireplace – a homely decor detail which is meant to nod to the fact that this level of the building previously served as the ambassador’s private residence. 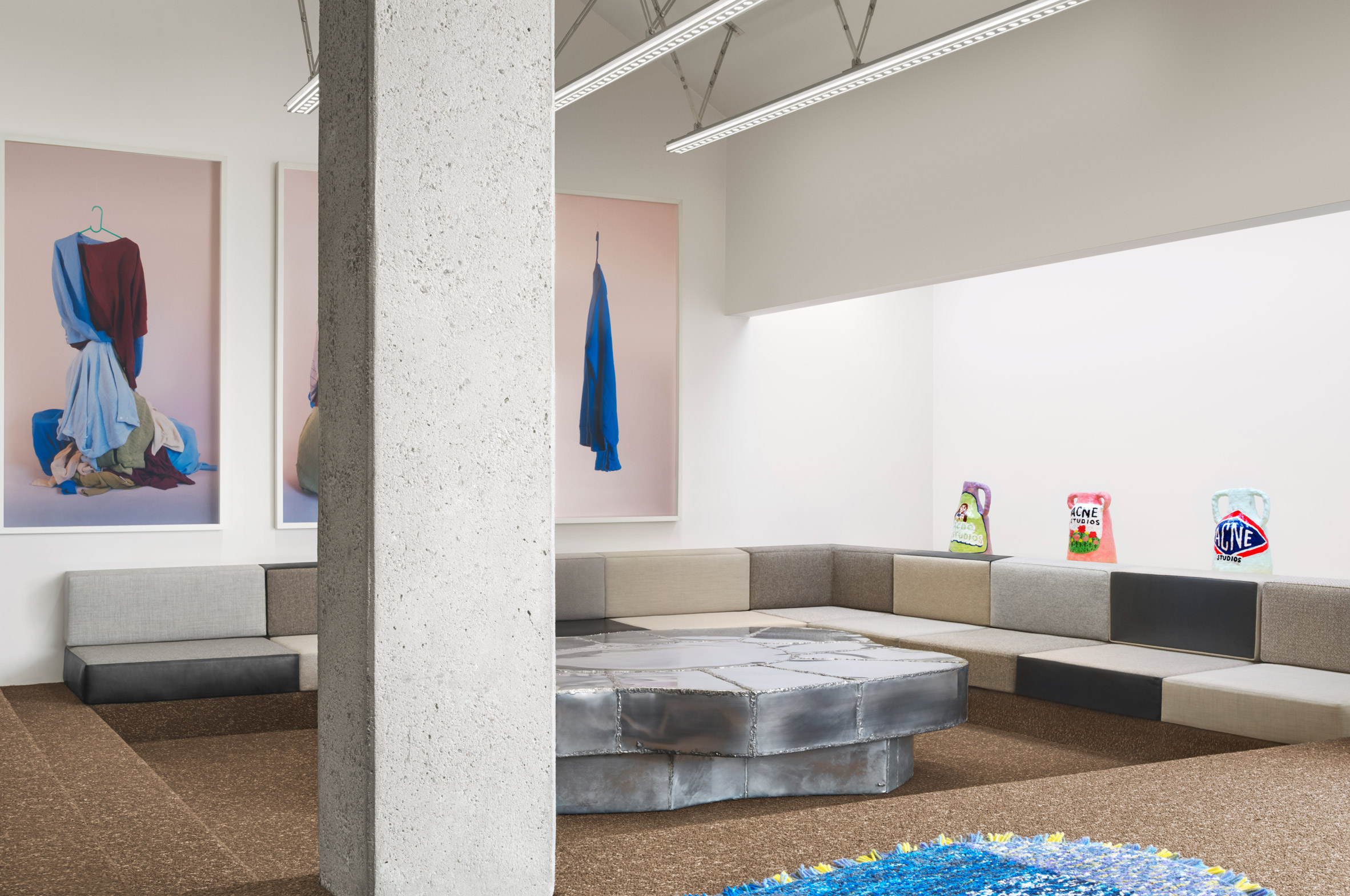 The bold aesthetic of Acne Studios’ HQ extends to its retail spaces – last year the brand opened a branch in West Hollywood where almost every wall is painted a pale shade of acid yellow.

Back in 2017 it also threw open the doors to its Milan flagship, which features shiny aluminium fixtures and a pink ceiling.