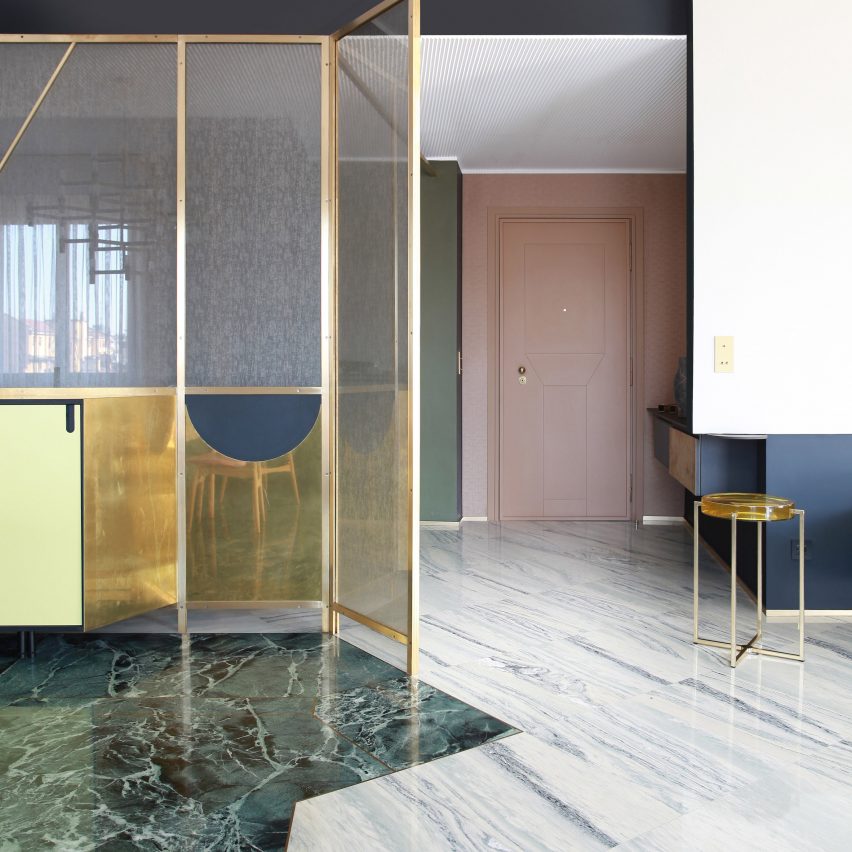 Veiny slabs of green and grey marble help visually tie together living spaces within this Milan apartment, which has been overhauled by design studio Marcante-Testa.

Previously described as a “typical bourgeois home”, Teorema Milanese has been redesigned by Turin-based Marcante-Testa to feature a rich mix of materials and colours. 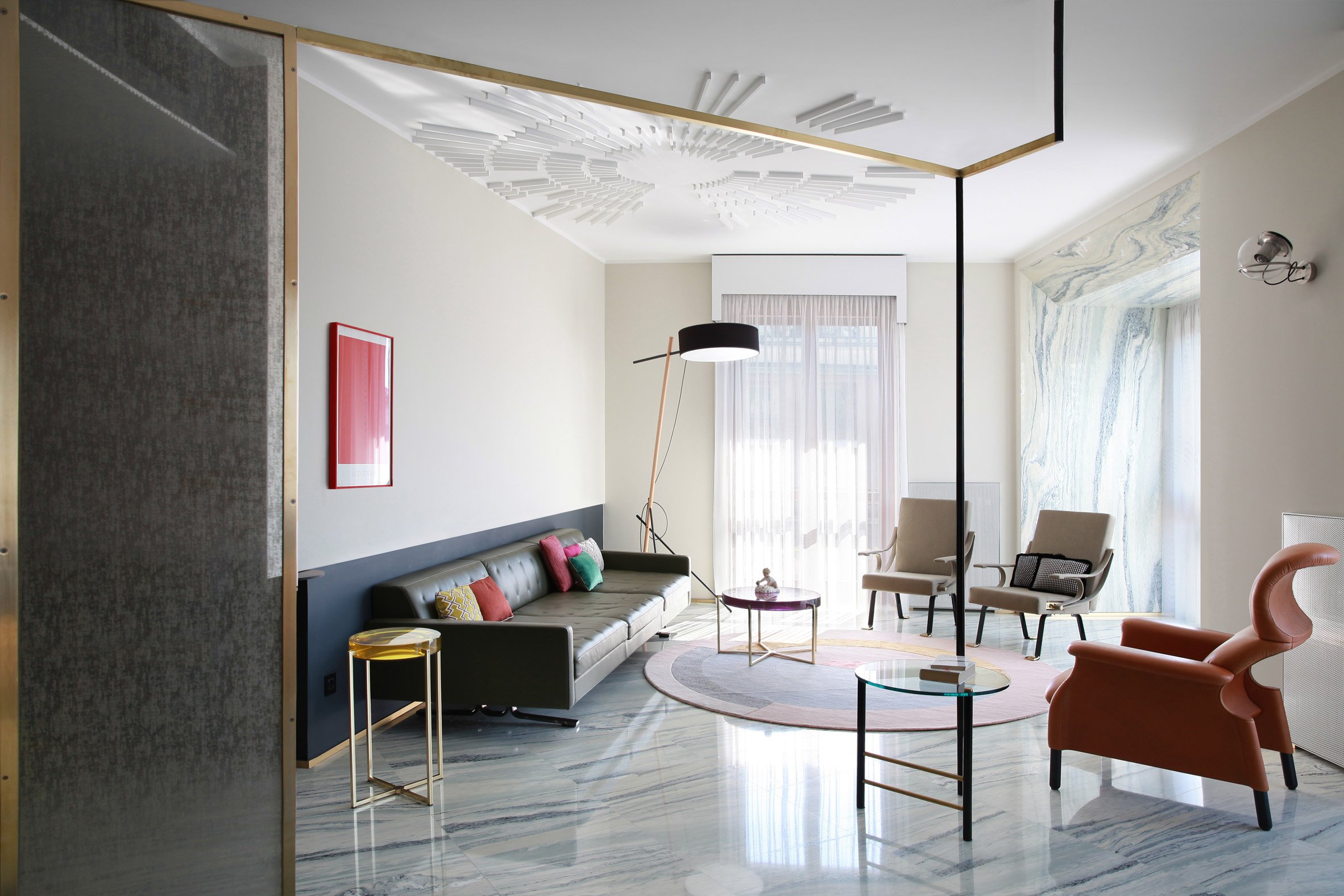 The studio was keen to maintain the apartment’s classic layout and thus decided to make just one significant structural change – a partition wall has been knocked through to form an open-plan living and dining room.

“Through doing so, something unexpected happens: the space is unified and, somewhat surprisingly, extended outwards, yet at the same time it is still subdivided into perceptible functional areas,” said the studio. 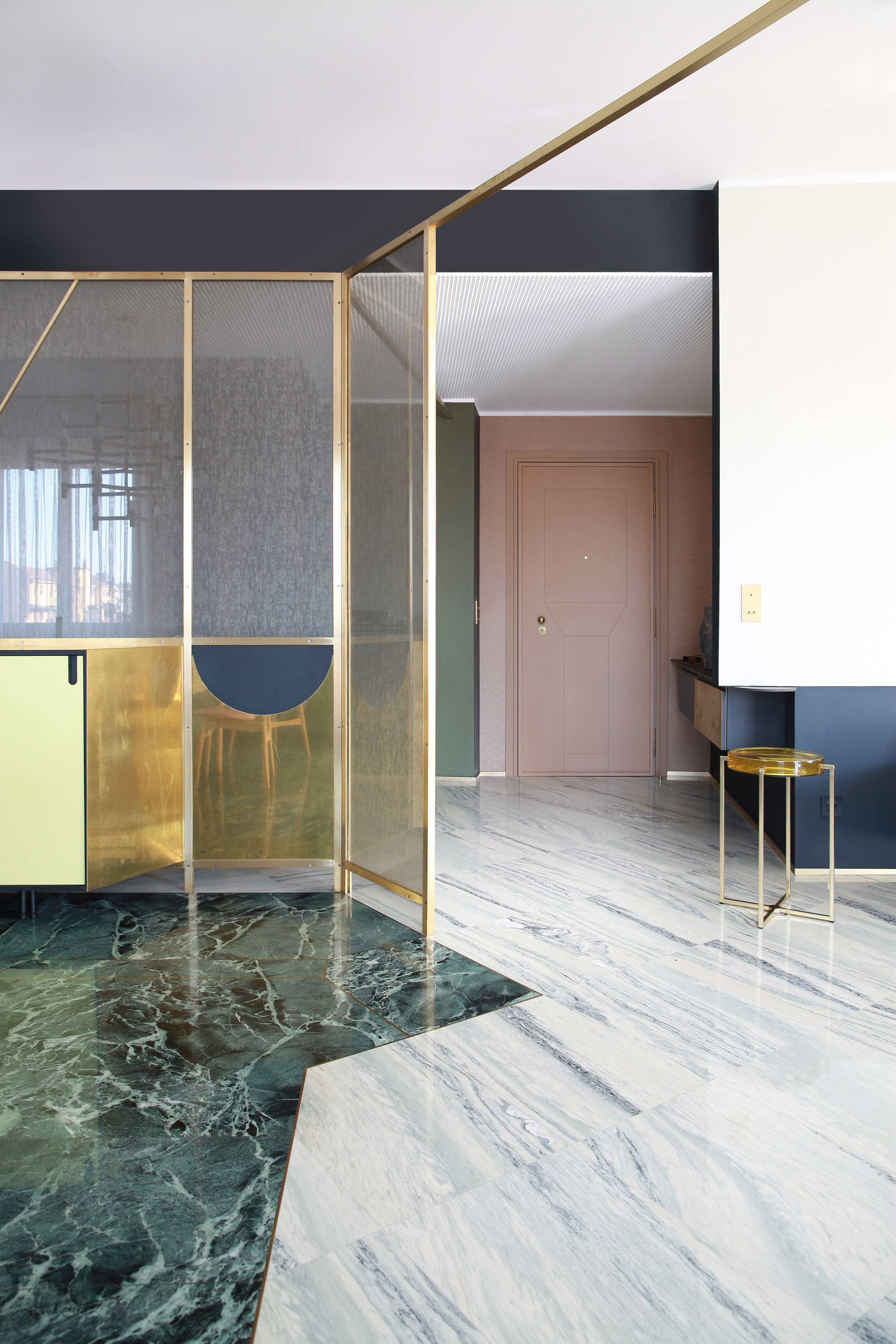 Pale grey cipollino tirreno marble becomes a “carpet” in the sitting area, which is dressed with sculptural armchairs, a khaki-green leather sofa and an oversized floor lamp.

The marble also extends up part of the wall and ceiling to create a giant window frame that looks out over a tree-lined boulevard below.

“The design of the marble slabs and the pattern of the veins within them create visual pathways, guiding the inhabitants through a pattern of precise spatial hierarchies,” the studio explained. 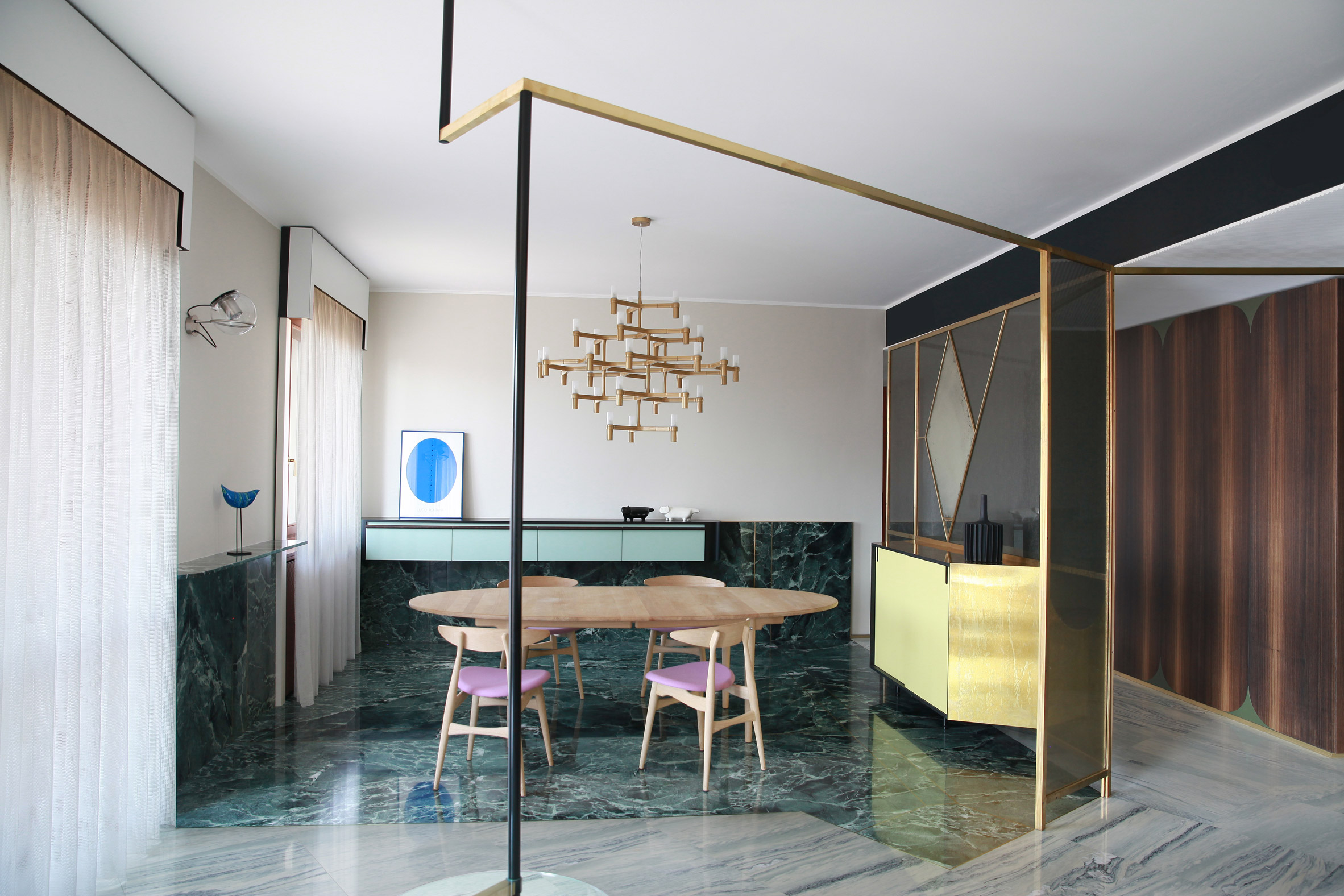 Deep-green verde alpi marble then covers the floor and sideboard of the other half of the room, which is centred by an oval, timber table.

Adjacently lies a brass-framed screen that offers a sense of separation between the dining area and the apartment’s entryway.

It’s inbuilt with a diamond-shaped mirror and a lemon-yellow cabinet where inhabitants can stow away their belongings. 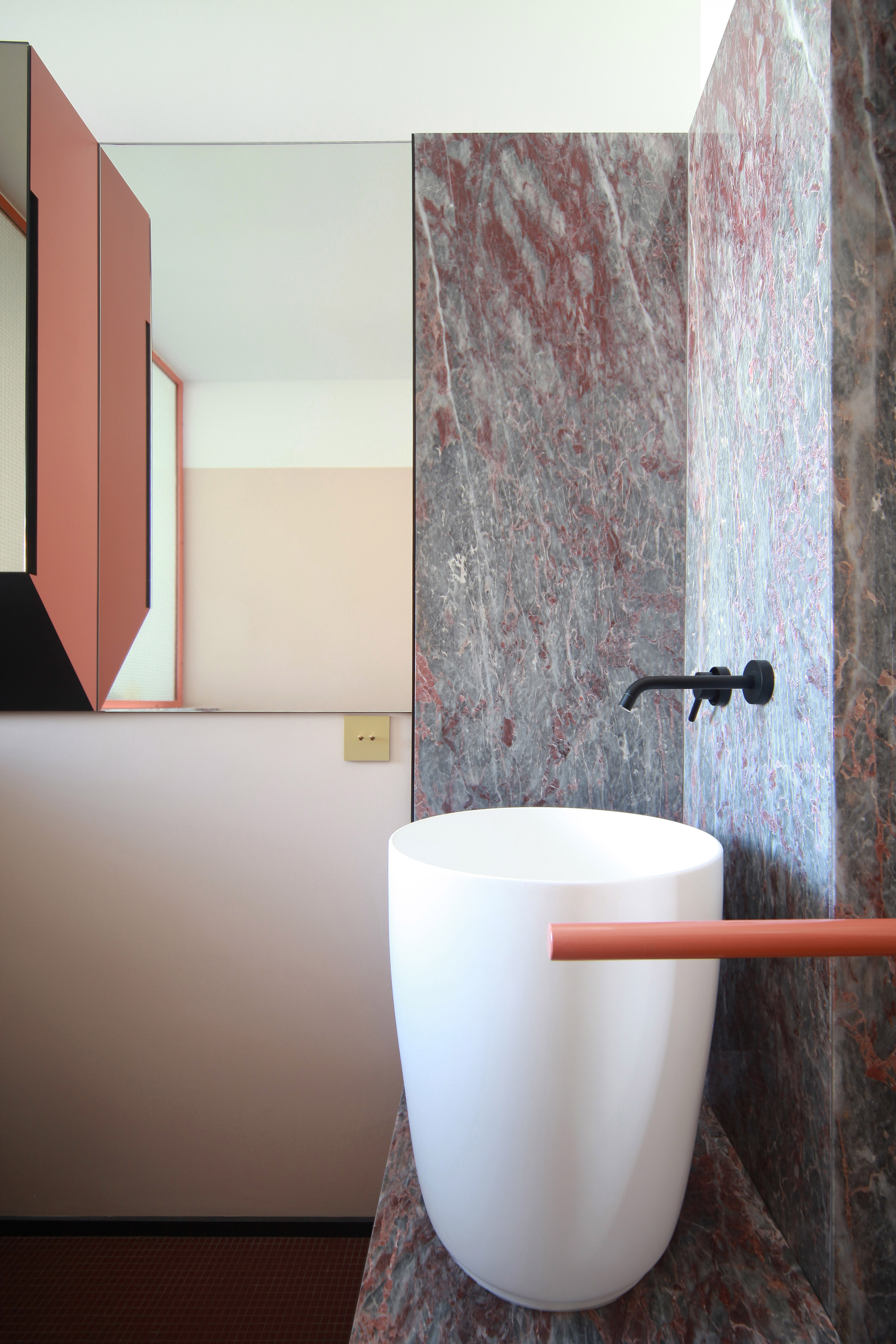 A long central corridor leads off to the home’s other brightly hued rooms, which are partially concealed by panels of mottled glass with coral-orange borders.

Maroon-streaked salomè marble serves as a splashback to sinks in the bathroom, complete with jet-black tap faucets. 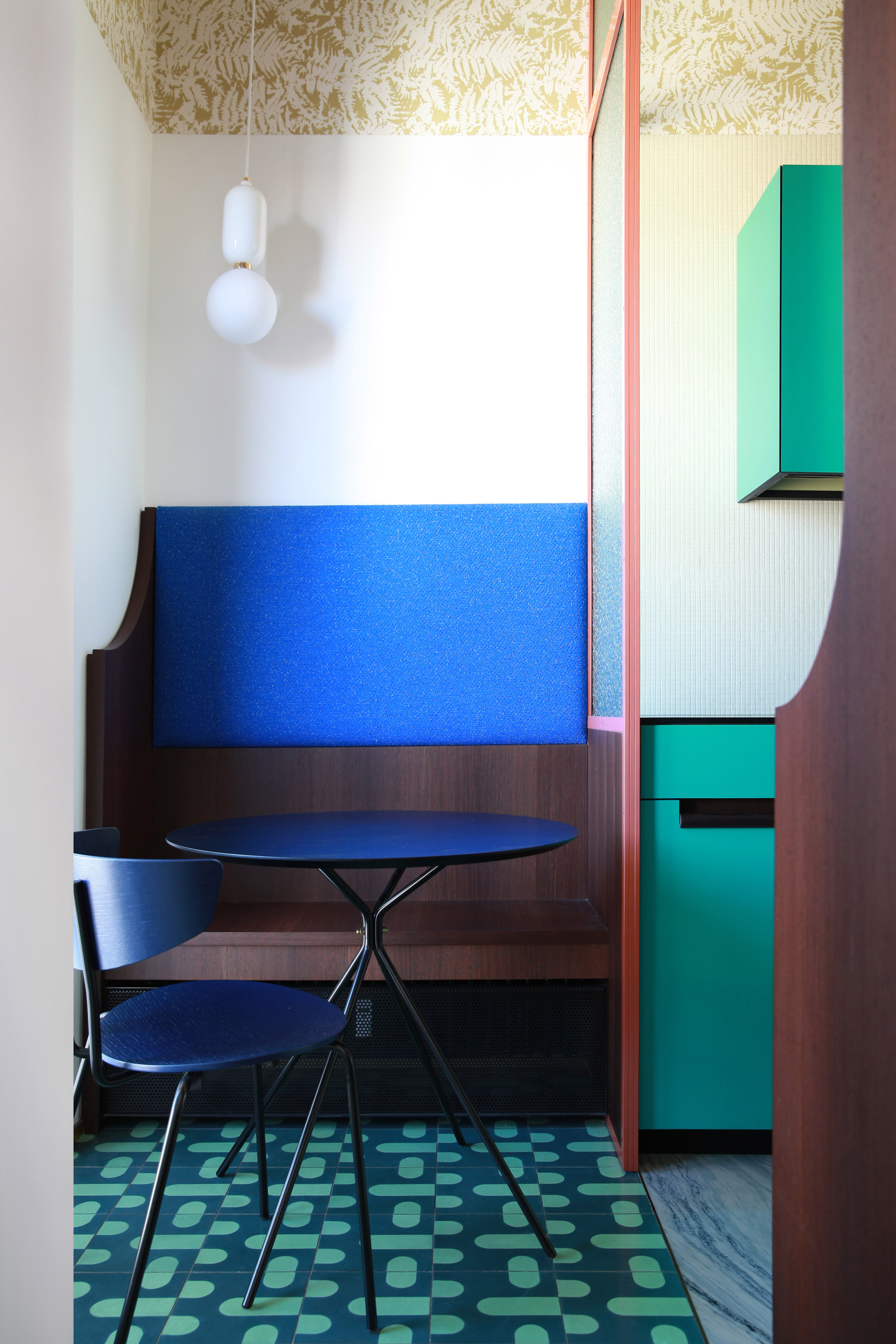 Meanwhile, in the kitchen, sea-green cabinetry complements geometric floor tiles that appear in the adjoining breakfast nook. Leaf-print ochre wallpaper runs across the ceiling above. 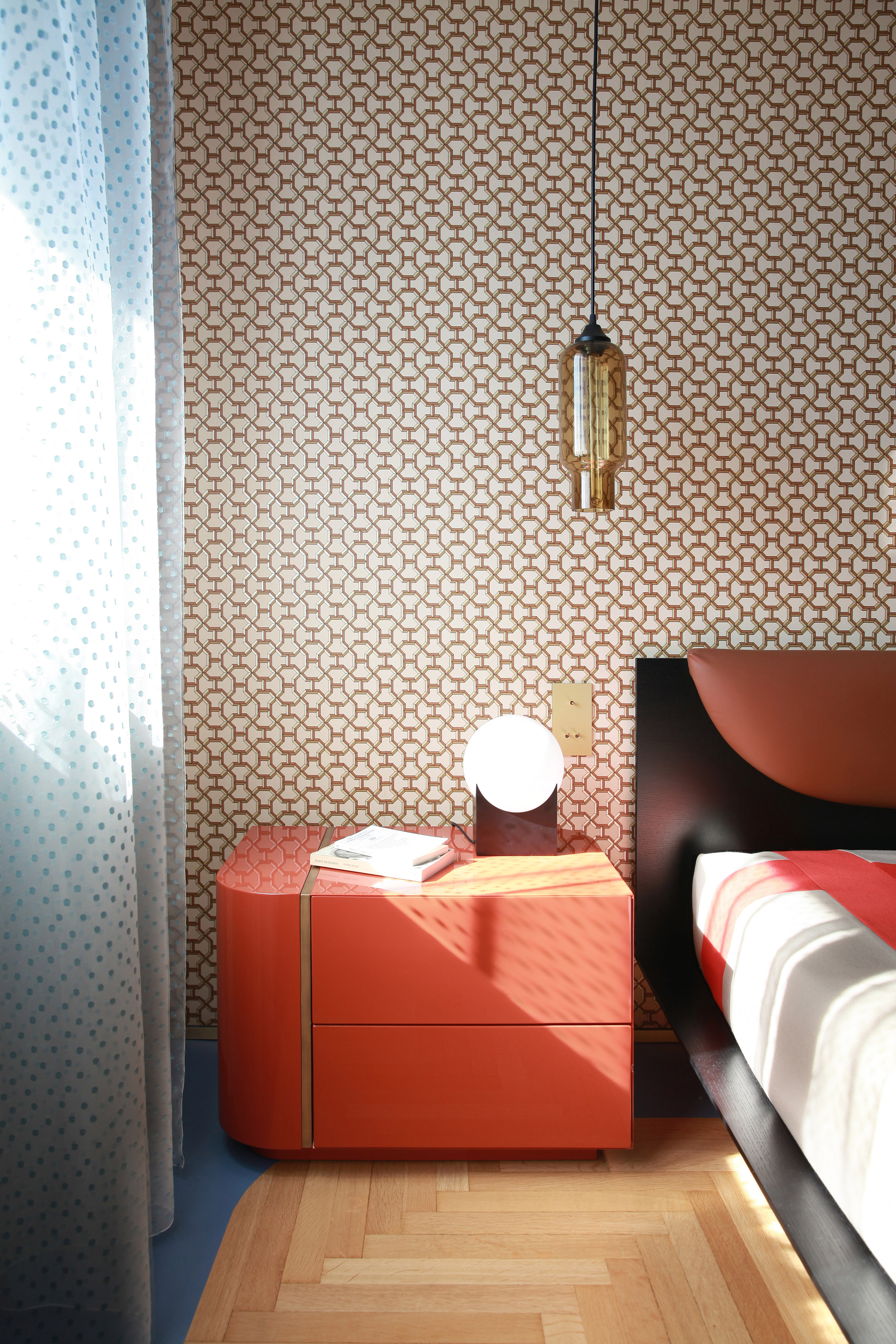 A similarly clashing mix appears in the master bedroom, where heavily-patterned wallpaper has been paired with flecked blue wardrobes and sheer polka-dot curtains.

Marble flooring here has also been traded for herringbone-pattern floorboards, parts of which have been painted to form a colourful border. 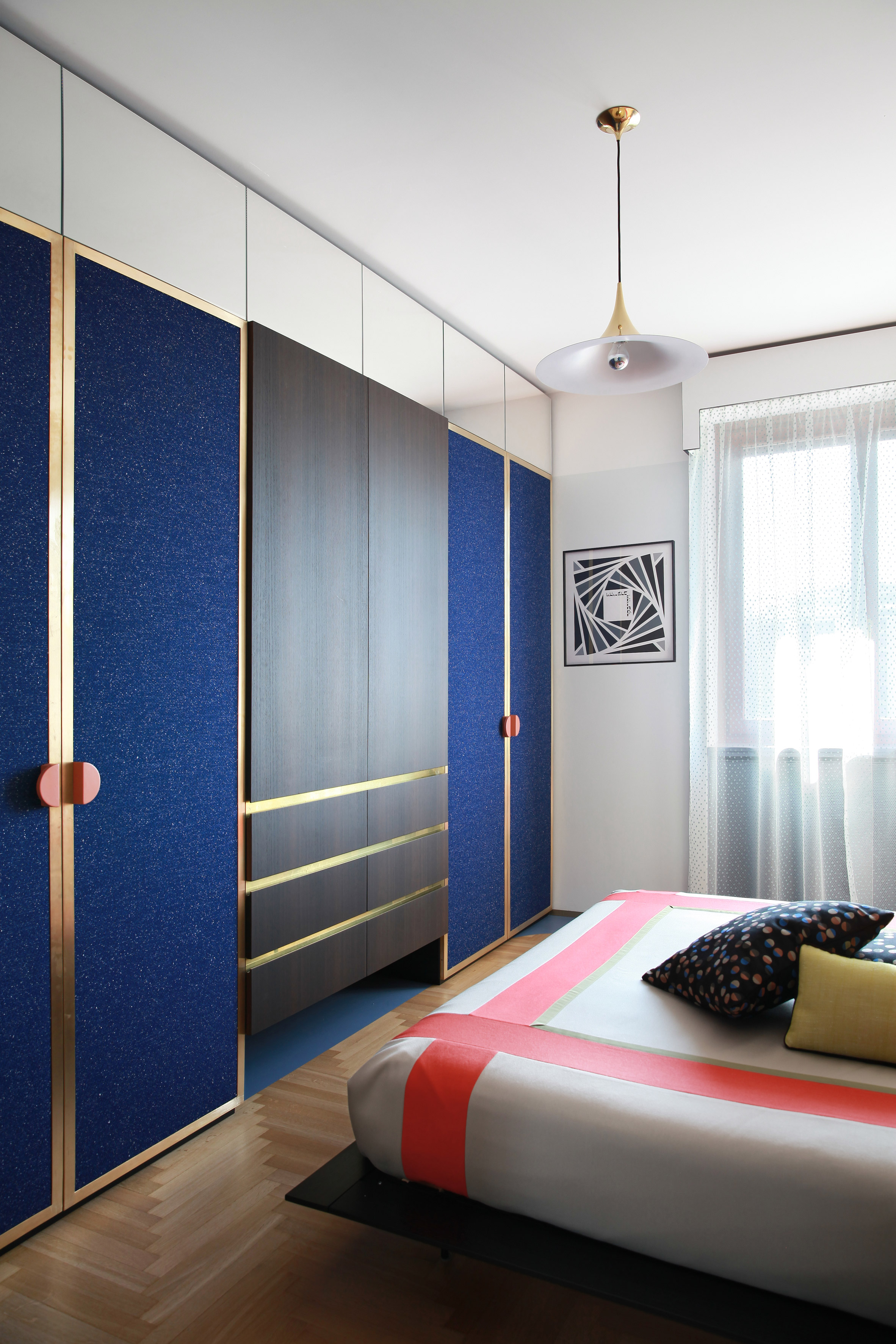 Marcante Testa was established in 2014 and is headed up by Andrea Marcante and Adelaide Testa.

This isn’t the only project the studio has completed in Milan – earlier this year it overhauled the interior of a fashion boutique to feature an “architectural landscape” of pink-clay partitions, copper pipes and plexiglass panels.

Photography is by Carola Ripamonti.