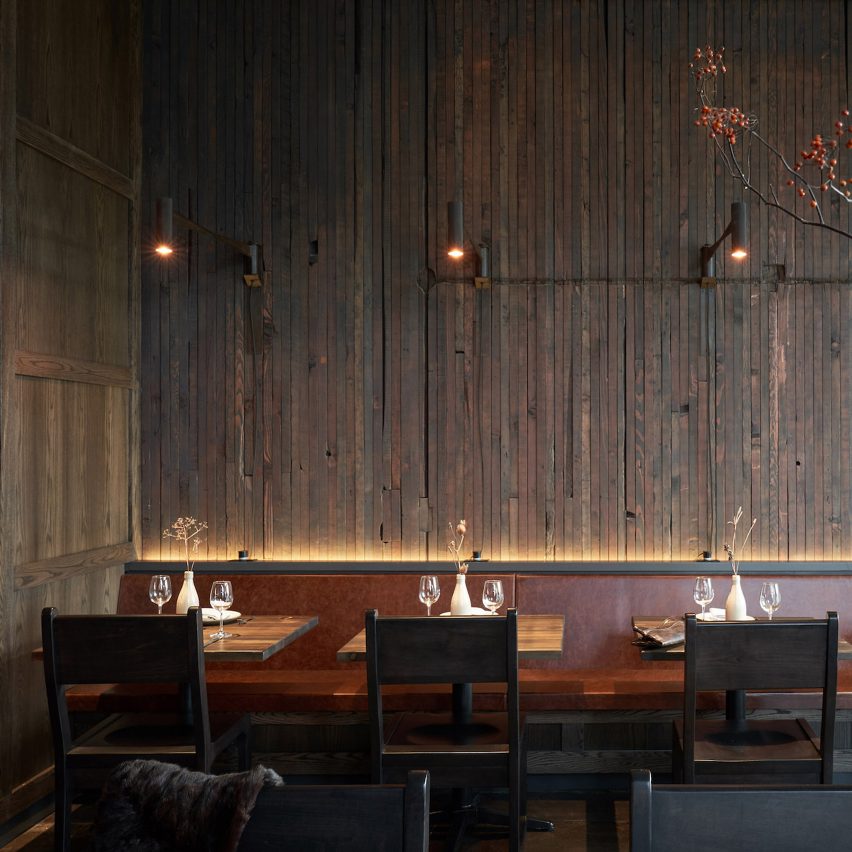 Architecture practice Mutuus Studio used rustic materials and earth tones to create a “sense of timelessness and comfort” within a Seattle farm-to-table restaurant.

Samara is located in a two-storey, 1920s building in the city’s Sunset Hill district. The eatery is named after a wing-shaped seed pod found on various trees, including elms and maples. 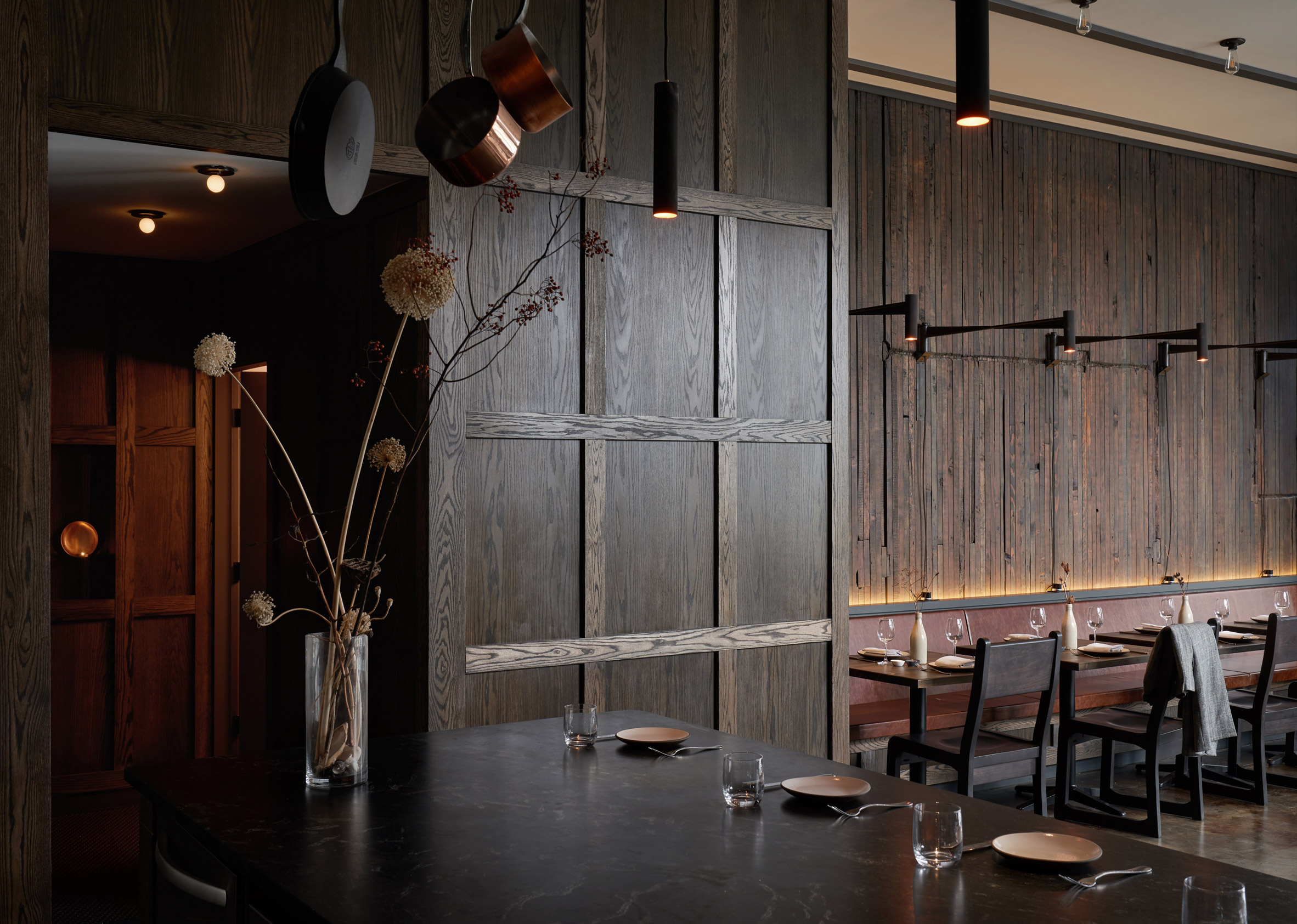 The restaurant serves up American cuisine, including local vegetables, fresh seafood, pork and duck. Most dishes are prepared using an oven and grill fuelled by wood.

The overall goal for Seattle’s Mutuus Studio was to create a neighbourhood bistro that felt both intimate and sophisticated, and would draw in patrons year-round.

“The design team sought to integrate the restaurant into the fabric of the neighbourhood by creating a place that evokes a rich sense of timelessness and comfort,” said firm principal Kristen Becker in a statement. “We wanted it to feel comfortable to go to in all seasons.” 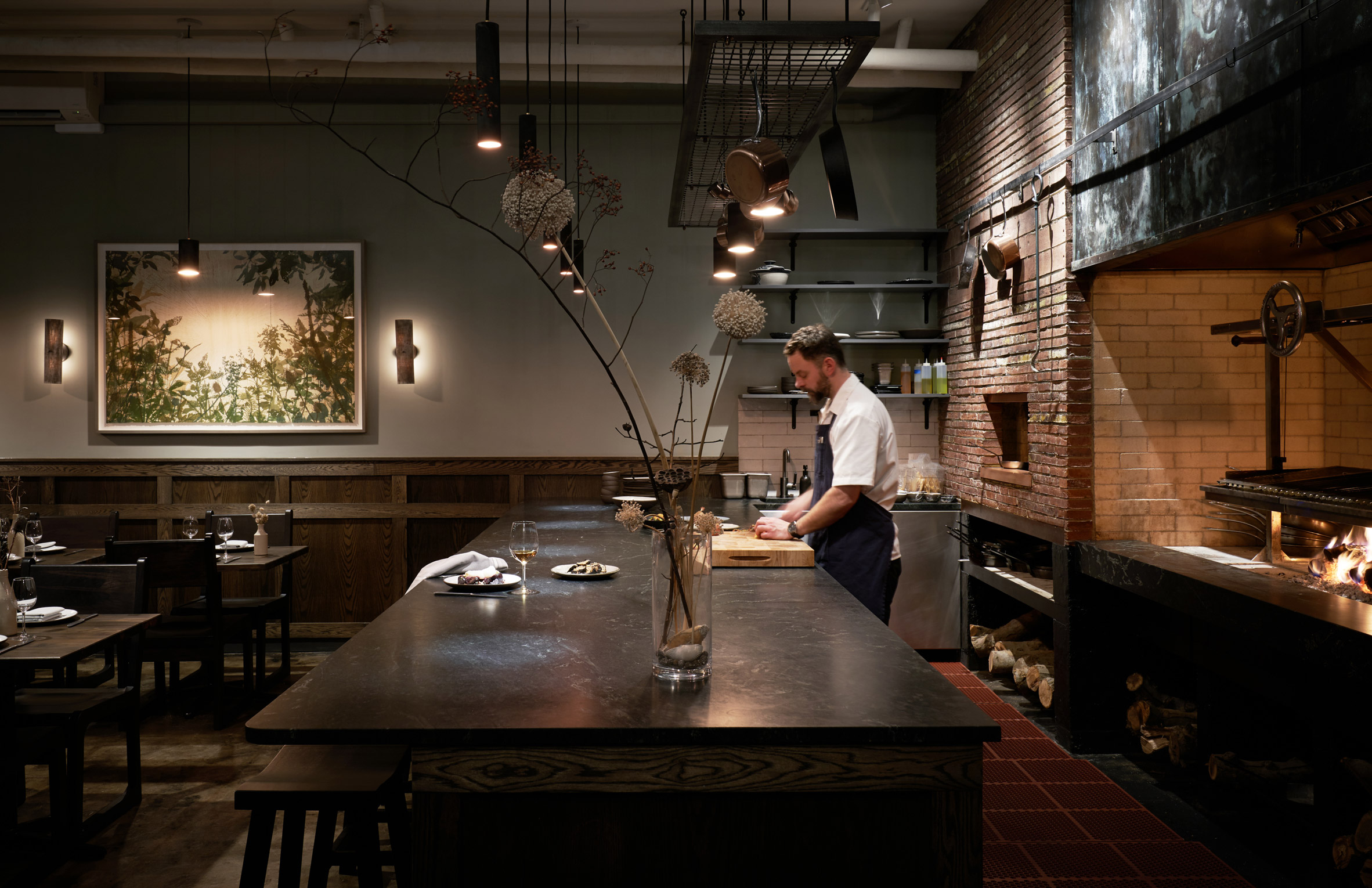 Rectangular in plan, the restaurant contains a single dining room and chef’s counter. Situated behind the counter are the wood-fired brick oven and metal grill, offering diners the opportunity to watch their food being prepared.

Exposed flames serve as a “not-so-subtle reminder of the comfort we feel in gathering together around a fire”.

Throughout the restaurant, the team took inspiration from simple objects that get better with age, such as a basic copper pot. References to nature were also integrated into the design. 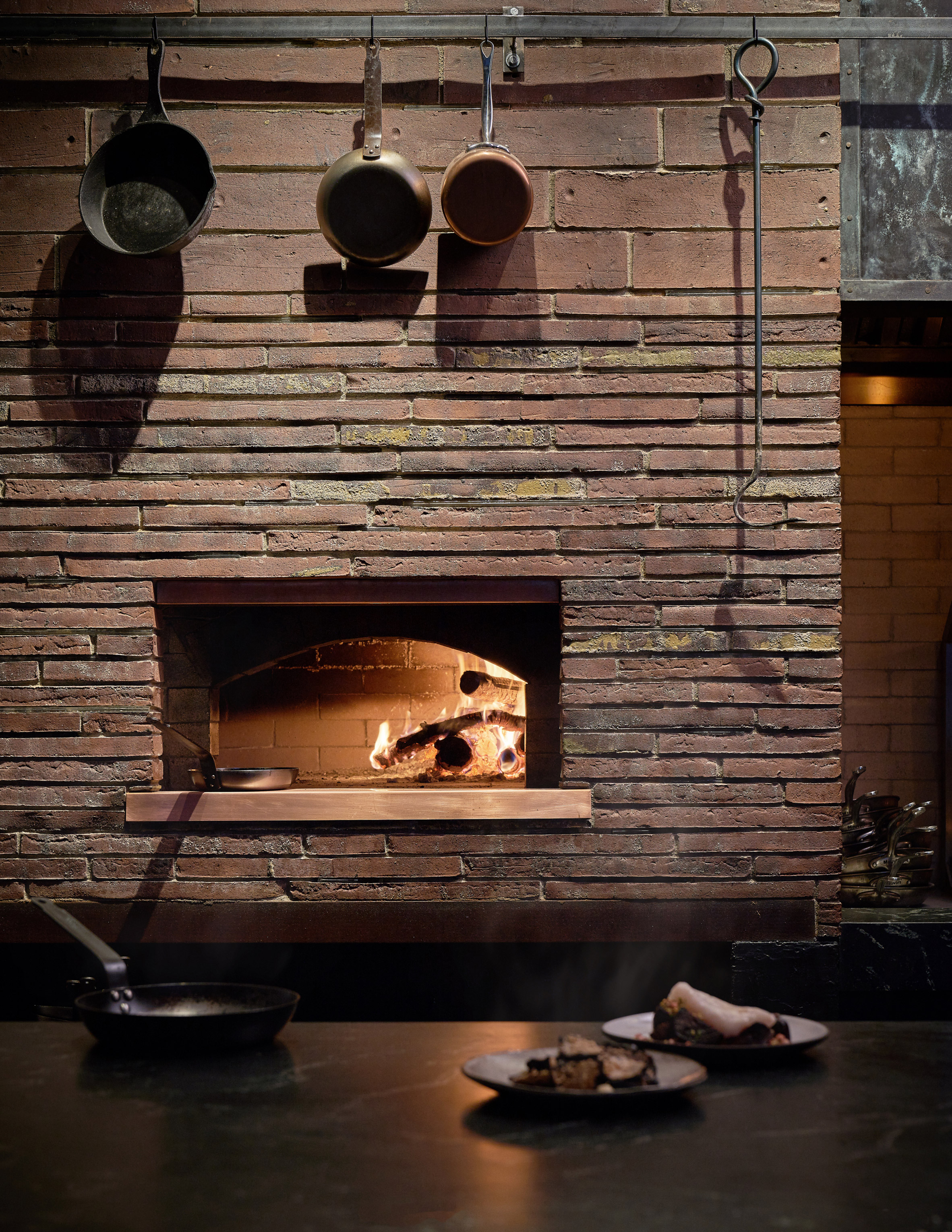 Earthy materials and colours were used for finishes and decor. A large portion of the space is wrapped in a dark-stained oak panelling and wainscoting – calling to mind a tranquil spot in the woods. The space also features a timber firewall, which was revealed during construction.

“I liken the atmosphere to a Dutch still life painting,” said firm principal Saul Becker. “It’s rich and moody with an elemental simplicity.”

The restaurant can accommodate up to 44 guests through a variety of seating options. Diners can nestle into leather banquettes or sit atop tall stools lining a chef’s counter, which is finished in dark grey soapstone. There also are multiple freestanding tables, which are topped with wood salvaged from old piers.

The oven is surrounded by handmade Danish bricks with embedded, fused glass, creating a “delicate dance of firelight”. The area above the oven is sheathed in patinated copper. 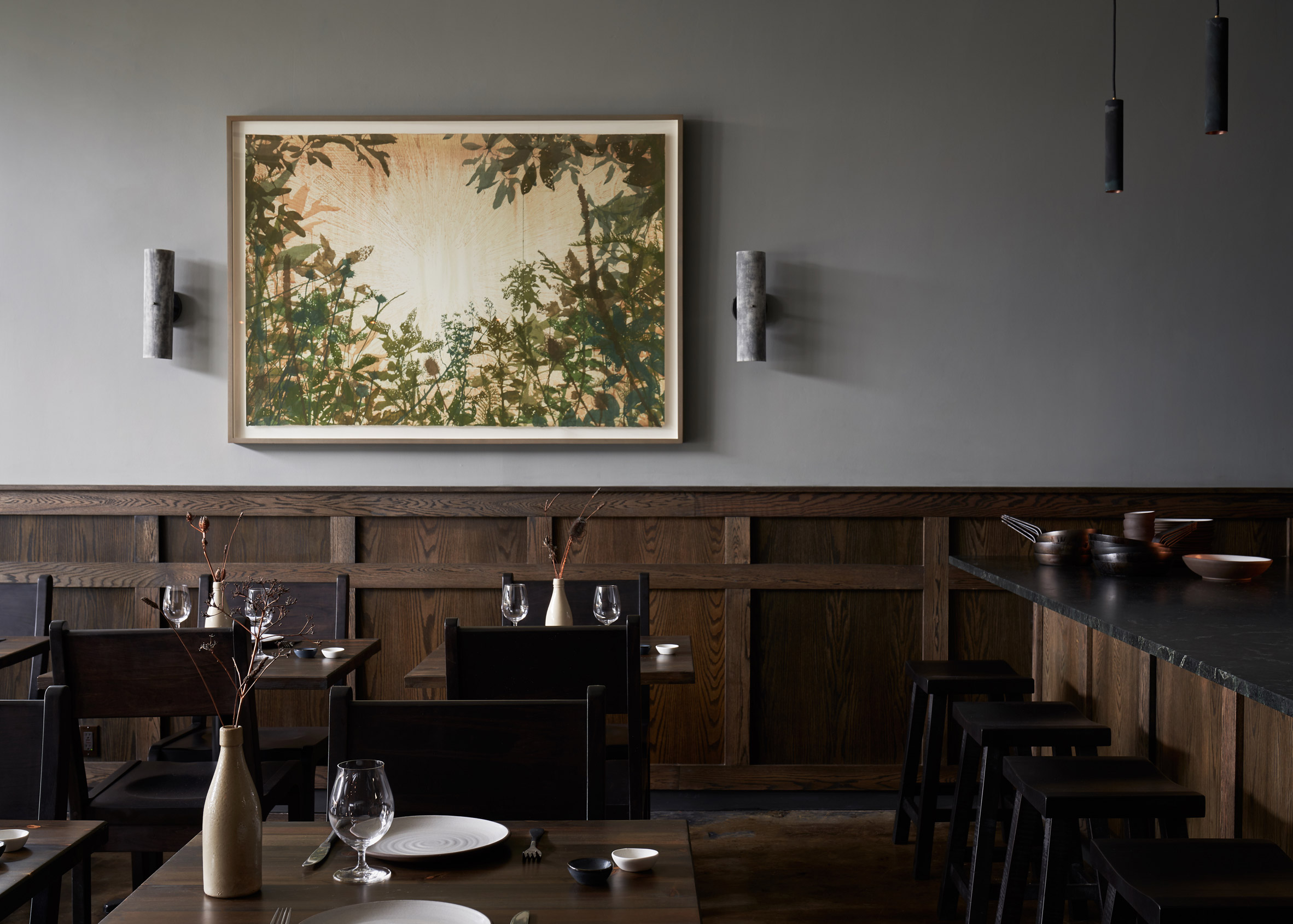 “We chose copper as our metal over blackened steel or other more conventional metals because of its connection to cooking,” said Saul Becker.

Illumination is provided by custom lighting fixtures that were designed and fabricated by Mutuus Studio. Suspended above the chef’s counter and kitchen are cylindrical pendants – named Cinder and Ember – made of knurled copper pipe.

Above the banquettes, the team placed Mallet fixtures, also made of knurled copper. Rotating arms allow the lights to adapt to different conditions. Lining other walls are sconces made of linen and resin. 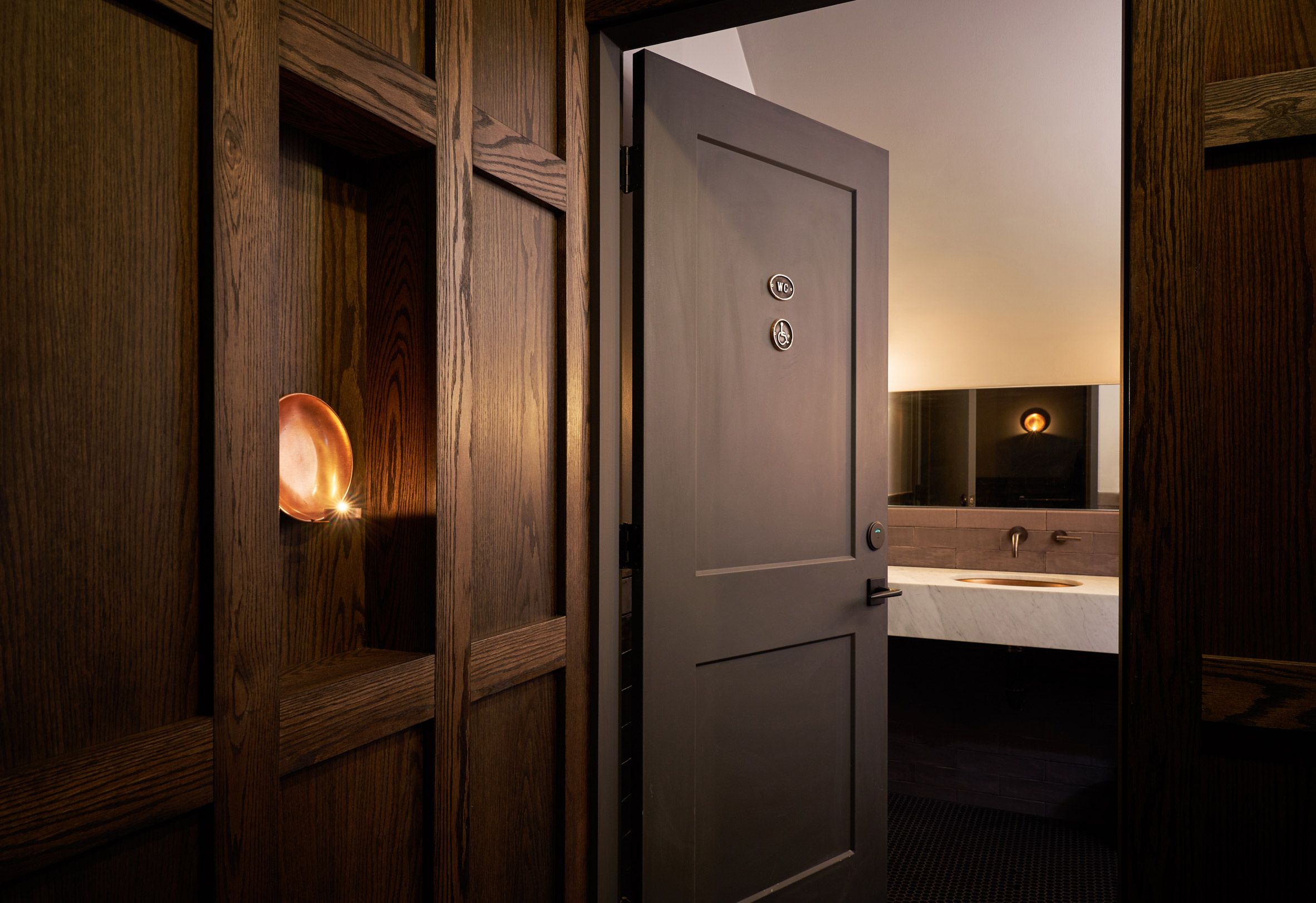 “The washroom features a light fixture made from a spent artillery shell – the body perforated and coated with reflective glass beads to create a subtle, twinkling light effect,” the team added.

The artificial light is kept at a minimum in the restaurant, helping maintain a comfy atmosphere. Existing concrete floors were lightly stained and then sealed. The space also received new windows and an exterior awning.

“Even with Seattle’s reputation for rainy weather, people still like to be connected to the outdoor neighbourhood streetscape when dining,” said firm principal Jim Friesz. “So we organised the table layout next to new, large operable windows at the front, cosy corner of the restaurant.”

Other projects by Mutuus Studio include the conversion of a large, steel sphere from a shuttered paper mill into a public art installation in Bellingham, a coastal Washington city.

Photography is by Kevin Scott.