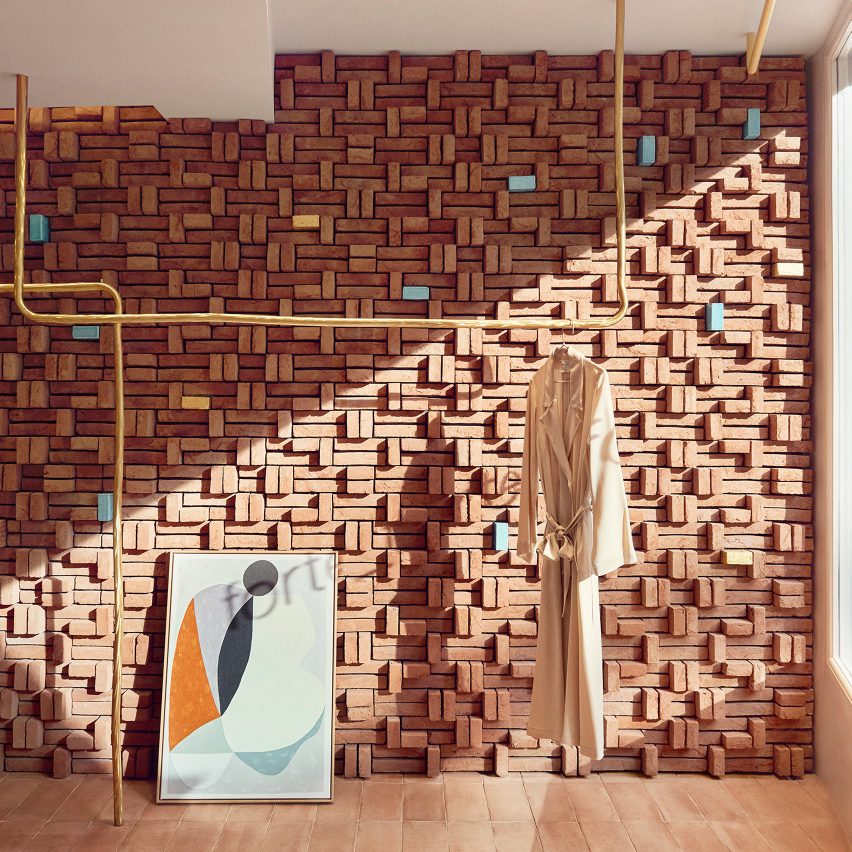 Clay bricks, onyx and plush velvet are just some of the materials that creative duo Giada Forte and Robert Vattilana have used for the interior of this fashion boutique, which has opened in west London.

Located in London’s affluent Chelsea neighbourhood, Forte Forte has been decked out in a medley of materials that are meant to offer a “succession of tactile and visual sensations”. 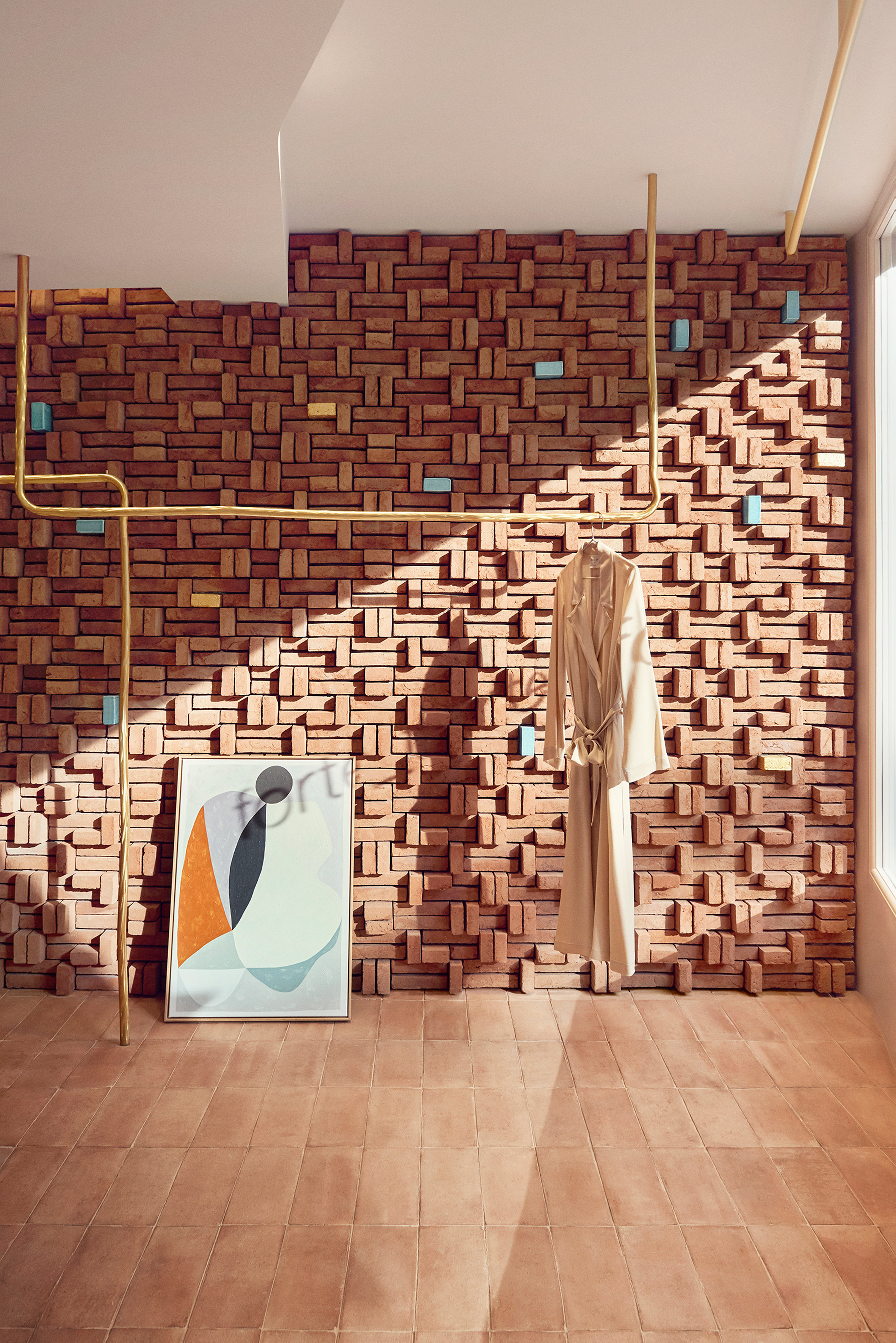 The two-floor boutique – which sells a selection of high-end womenswear and accessories – was designed by the brand’s co-founder, Giada Forte, and her partner, creative director Robert Vattilana.

“The feeling is to enter a place that keeps moving instead of being static, run by a sense of surprise and discovery: a fluid, ever-changing container,” the pair explained. 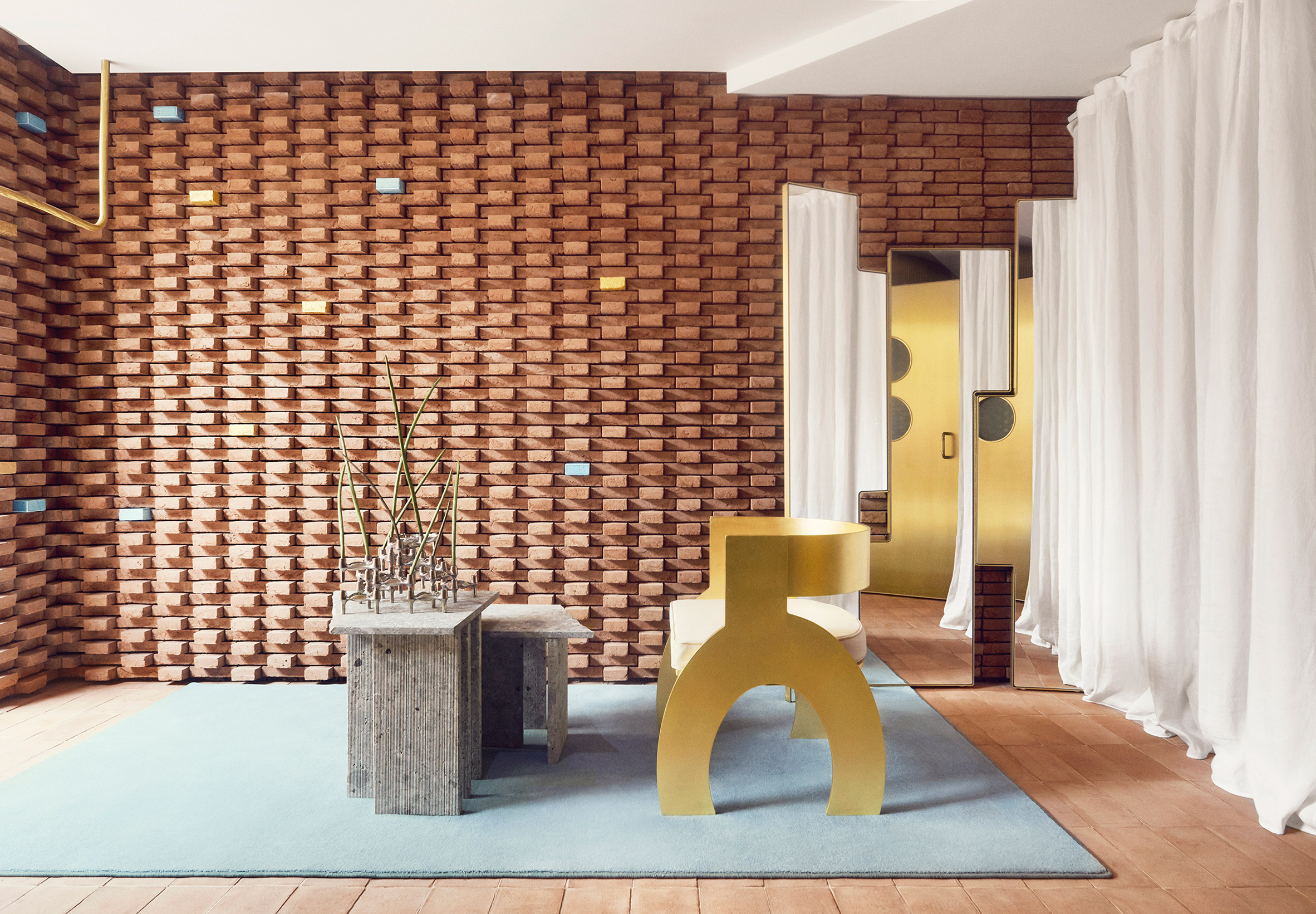 Red clay bricks have been used to line a majority of surfaces on the shop’s ground floor. In some areas the bricks are laid flat, while in others they’ve been stacked horizontally and vertically to create an almost pixelated surface effect.

To add a “surprising touch to the visual and chromatic melody”, a handful of finely-cracked turquoise ceramic bricks have been dotted across the wall, as well as some gold-leaf blocks. 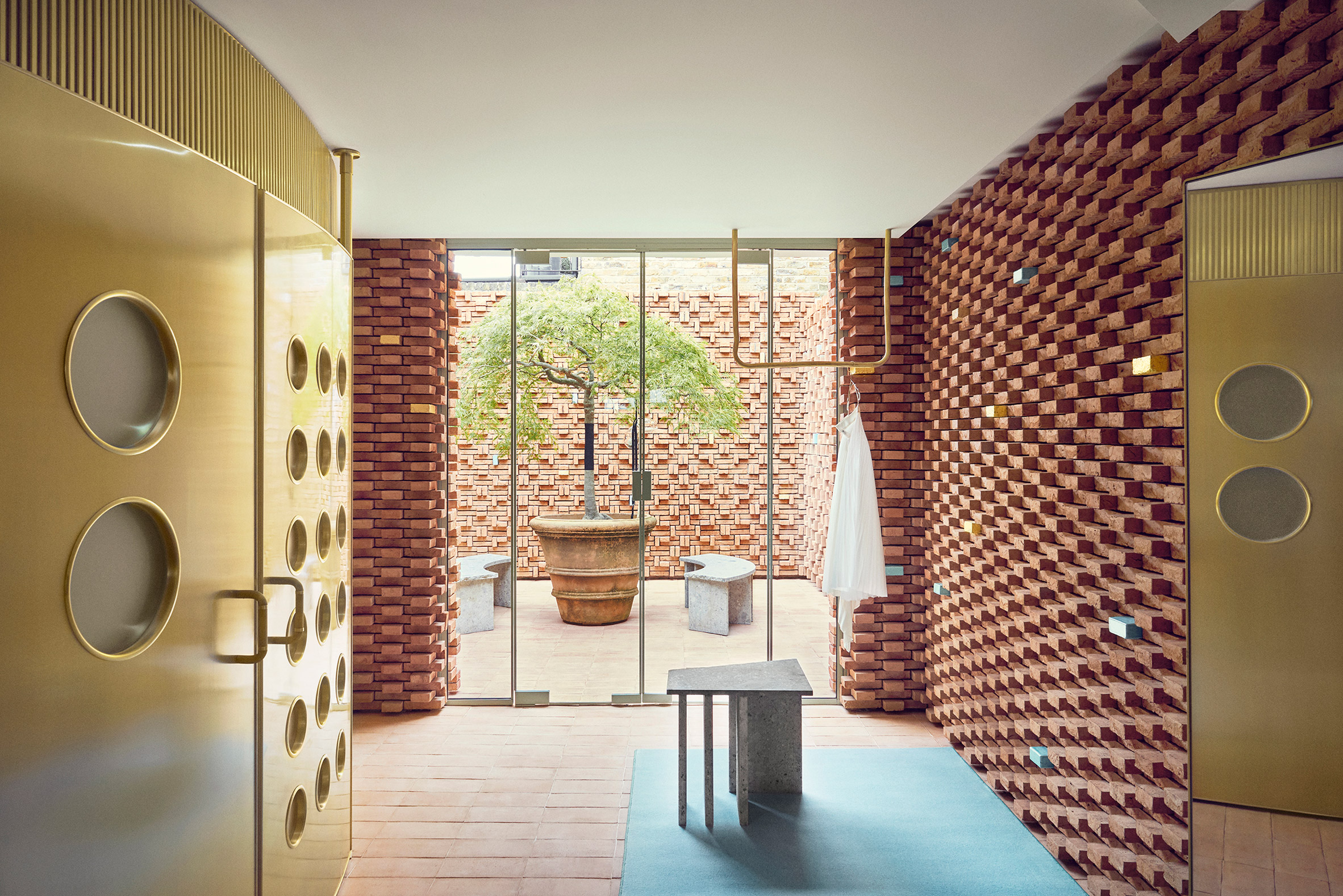 The bricks go on to appear in the outdoor courtyard, which lies at the back of the store. At its centre is a Japanese maple tree.

“[The trees] changing of leaves during the year marks the alternation of the seasons, adding to the dimension of time in the space,” Forte and Vattilana explained. 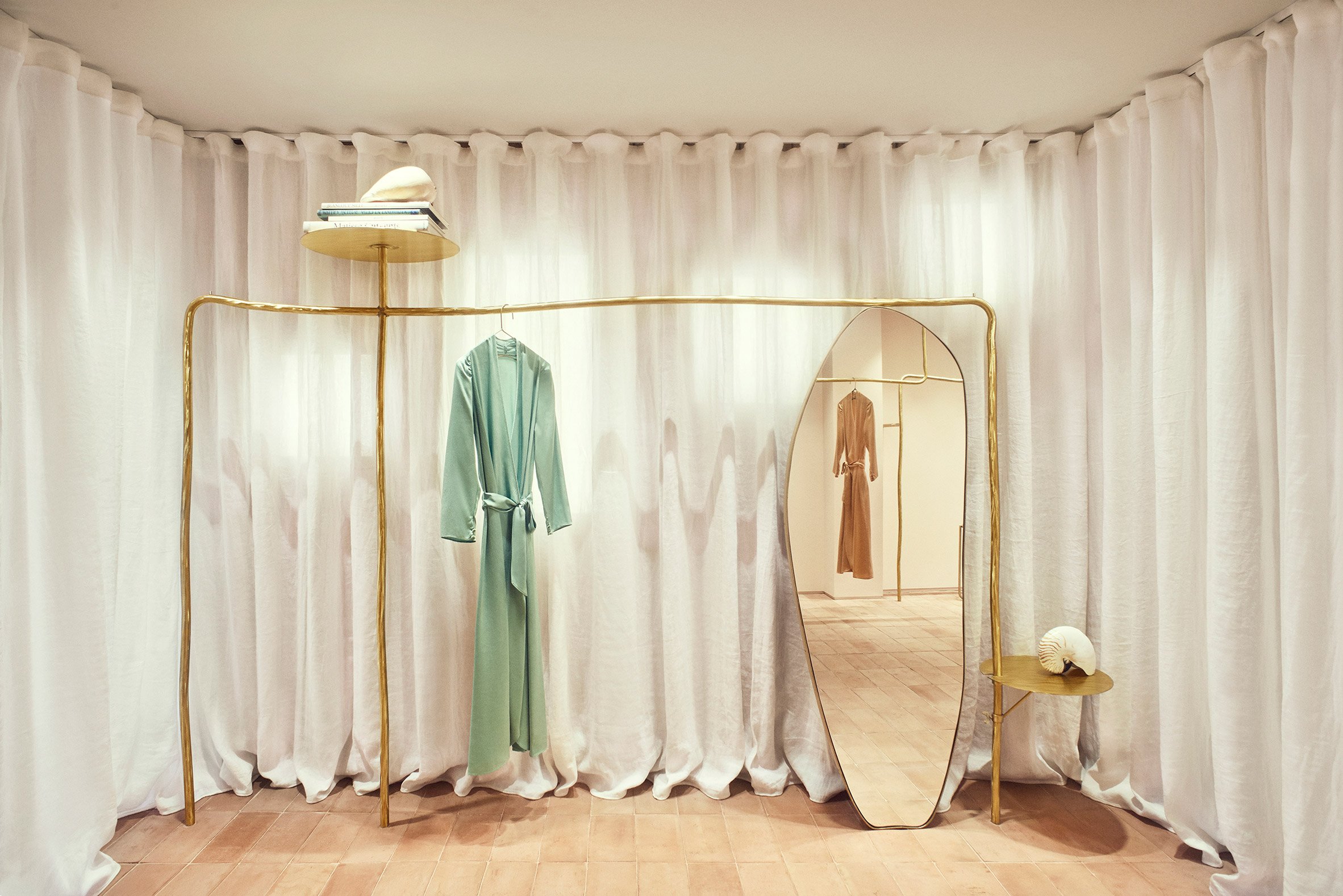 Brass – which Forte and Vattilana say is part of their “material grammar” – has been used to craft several fixtures in the store, including the wiry clothing rails, organically shaped mirrors and ultra-thin treads on the stairs.

The gold-hued metal has also been used to craft huge grooved doors that grant access to the changing rooms. Inside they’ve been finished with cushioned walls and heavy blue-velvet curtains to be “as welcoming as a boudoir”. 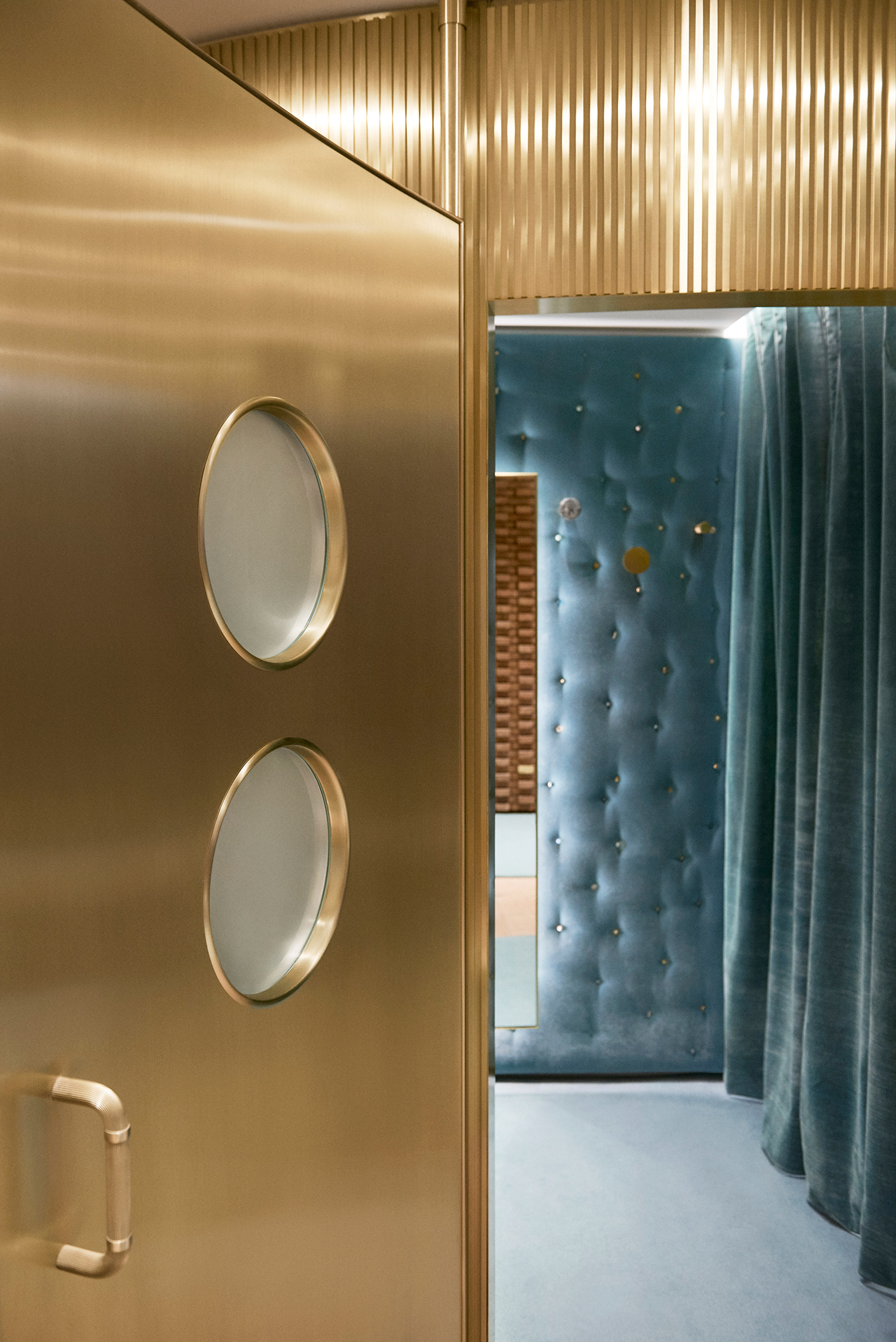 Grey ceppo lombardo stone has been used to create a chunky service-counter and the base of greenery-filled planters. A block of pale-yellow onyx also forms the first step of the staircase.

A couple of sculptural armchairs and chaise-longues have been added to bring a more domestic feel to the space, as well as a couple of paintings and postcards from far-flung destinations. 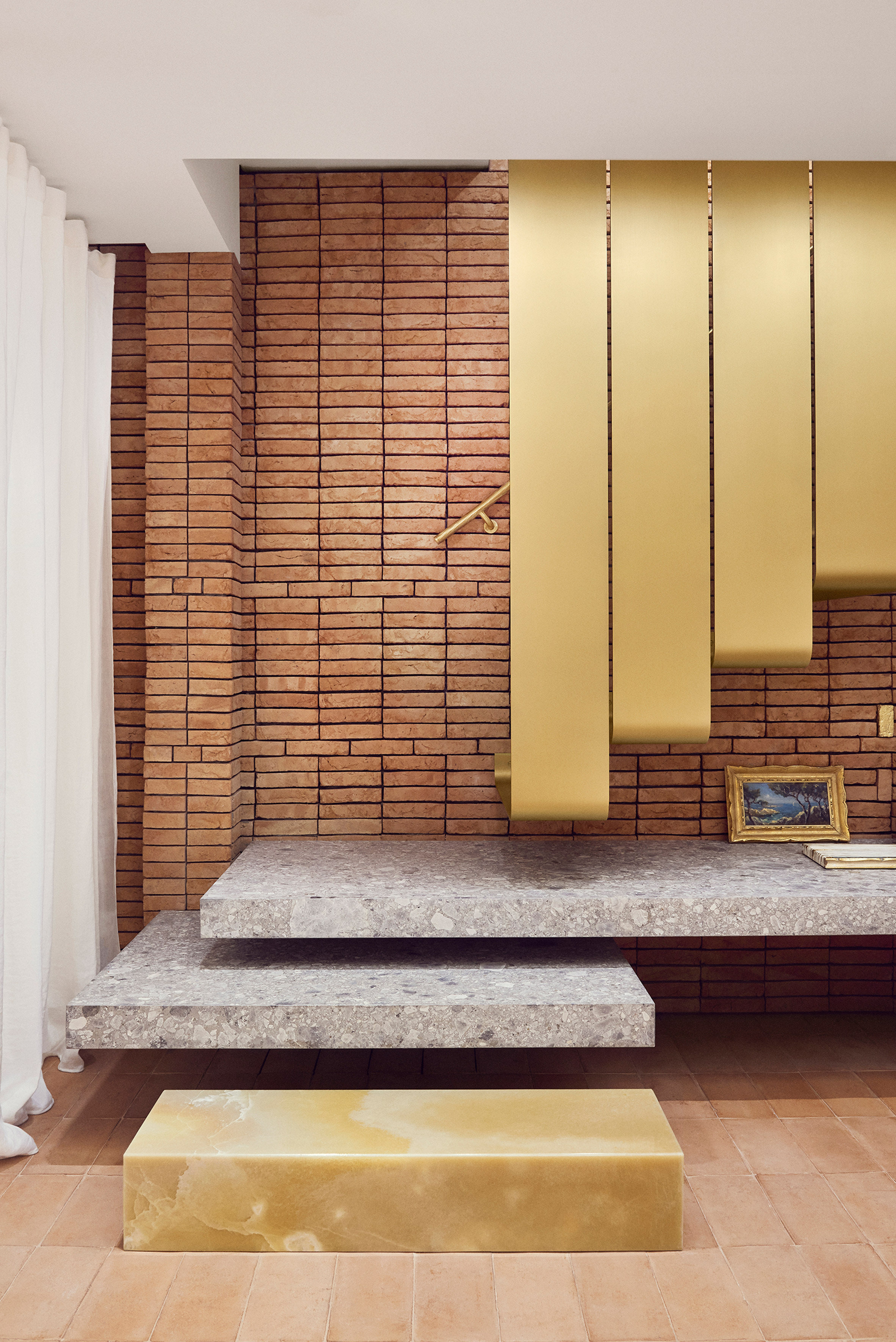 London’s Forte Forte boutique is the brand’s fourth bricks-and-mortar location, joining branches in Paris, Tokyo and another in Milan, which Dezeen featured back in 2018.

The Milan store boasts travertine marble surfaces and a random array of decorative ornaments, including lumps of coral, a Roman bust and nude sketch.

The post Material palette of London’s Forte Forte boutique is a “visual and chromatic melody” appeared first on Dezeen.