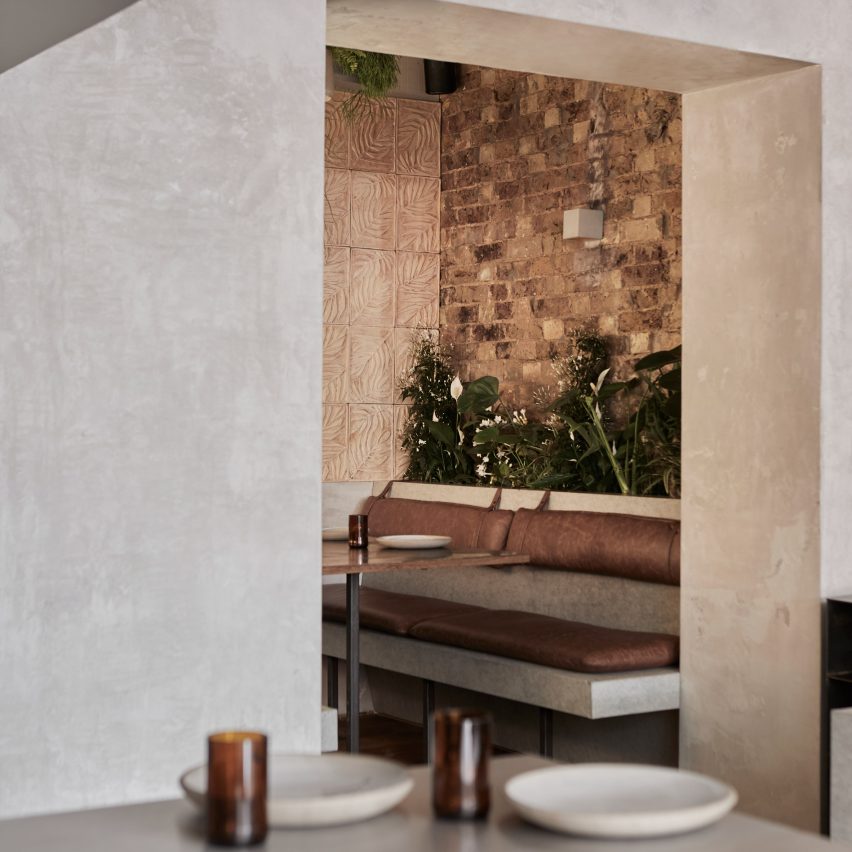 Cement, concrete and black steel merge to form the Brutalist-inspired interiors of this Sri Lankan restaurant in Soho, London, which Dan Preston Studio has dotted with tropical details.

Designer Dan Preston was asked by the restaurant’s owners to refurbish the space and create an interior that recalls the urban bistros seen in the Sri Lankan cities of Colombo and Galle, and their dusk-til-dawn food culture. 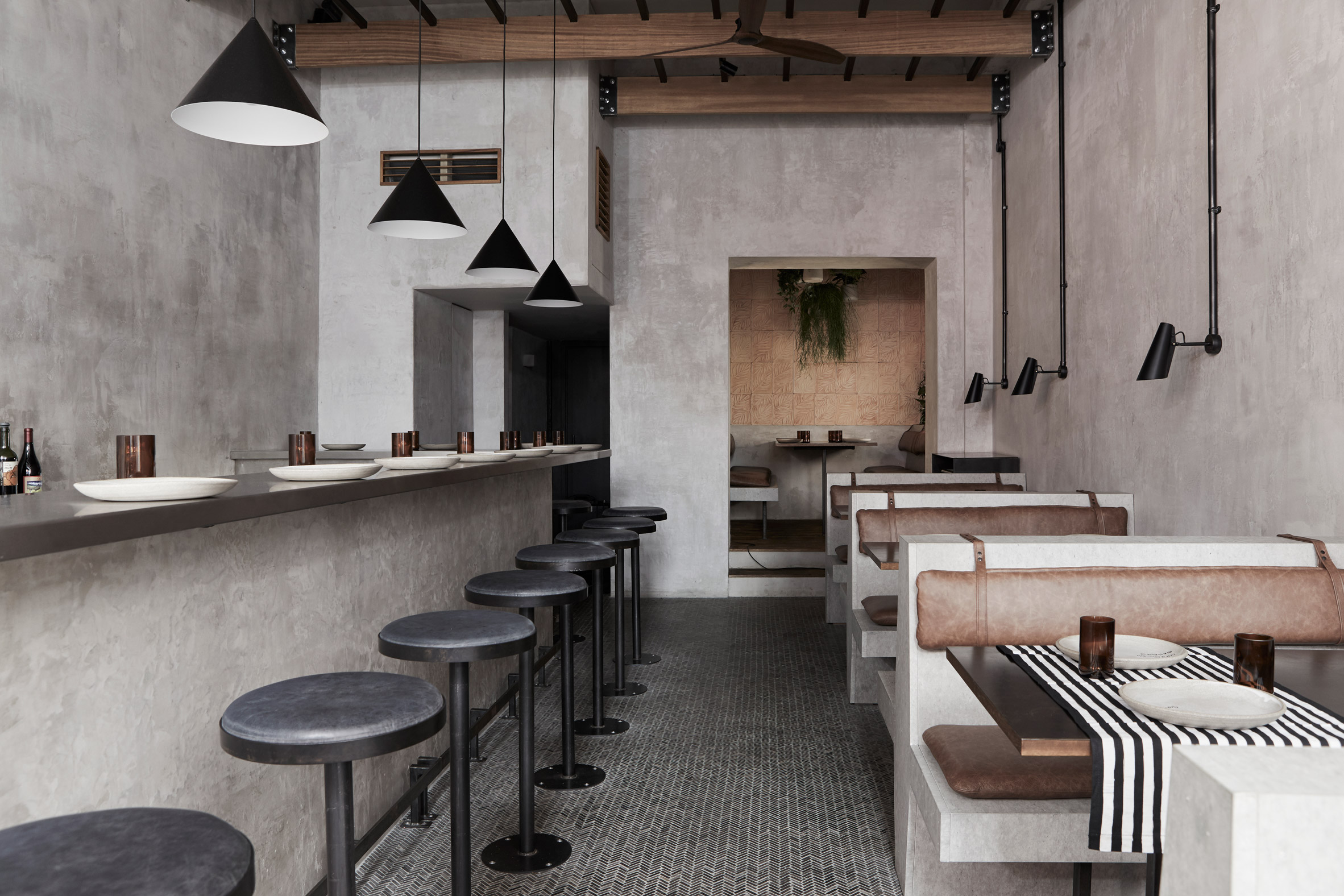 Preston’s eponymous design studio looked to the brutalist architecture of Colombo for inspiration and the work of modernist Sri Lankan architect Geoffrey Bawa, as well imagery of the country’s luscious rainforests.

“Bawa’s architecture, although in material contrast to its surroundings, seamlessly embraced its environment,” Preston told Dezeen.

“Soho doesn’t have so much tropical forest for surroundings, but we thought a reference to the outdoors, a subtle, softer garden experience was important to incorporate within the design,” he continued.

“The use of hand made tiles, exposed brickwork added to this idea.” 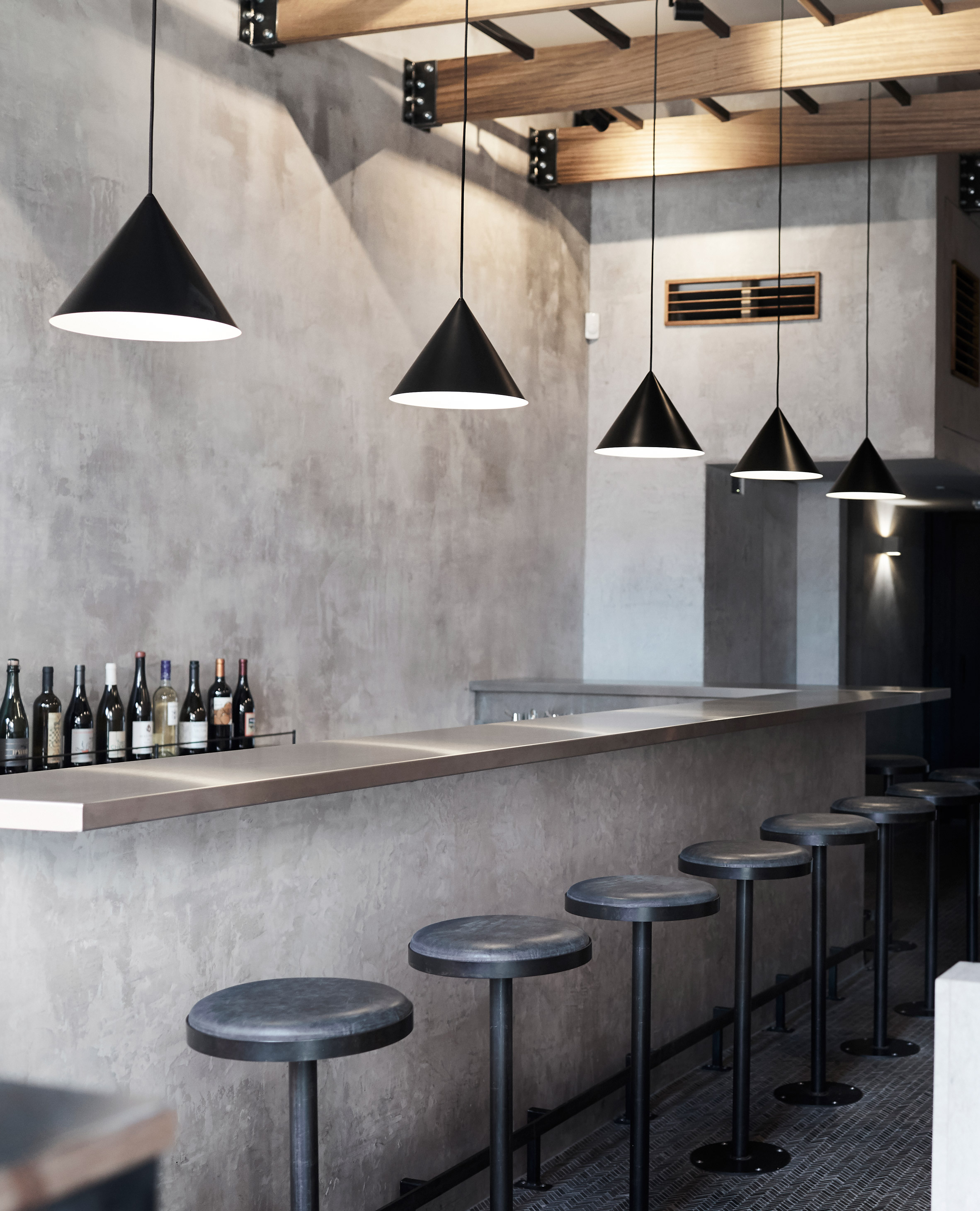 Walls throughout the restaurant are finished with micro cement and the floor is lined with black tiles. The ceiling has been covered with a limewash-style paint and fitted with a series of Iroko-wood beams, mimicking the roofs of Bawa’s buildings.

In keeping with the urban theme, the furniture and fittings are made from brushed or black-coloured stainless steel and finished with a bespoke patina developed in the studio’s workshop.

The restaurant is illuminated by rows of spotlights that run across the beams, as well as cone-shaped pendant lights that hang over the counter. 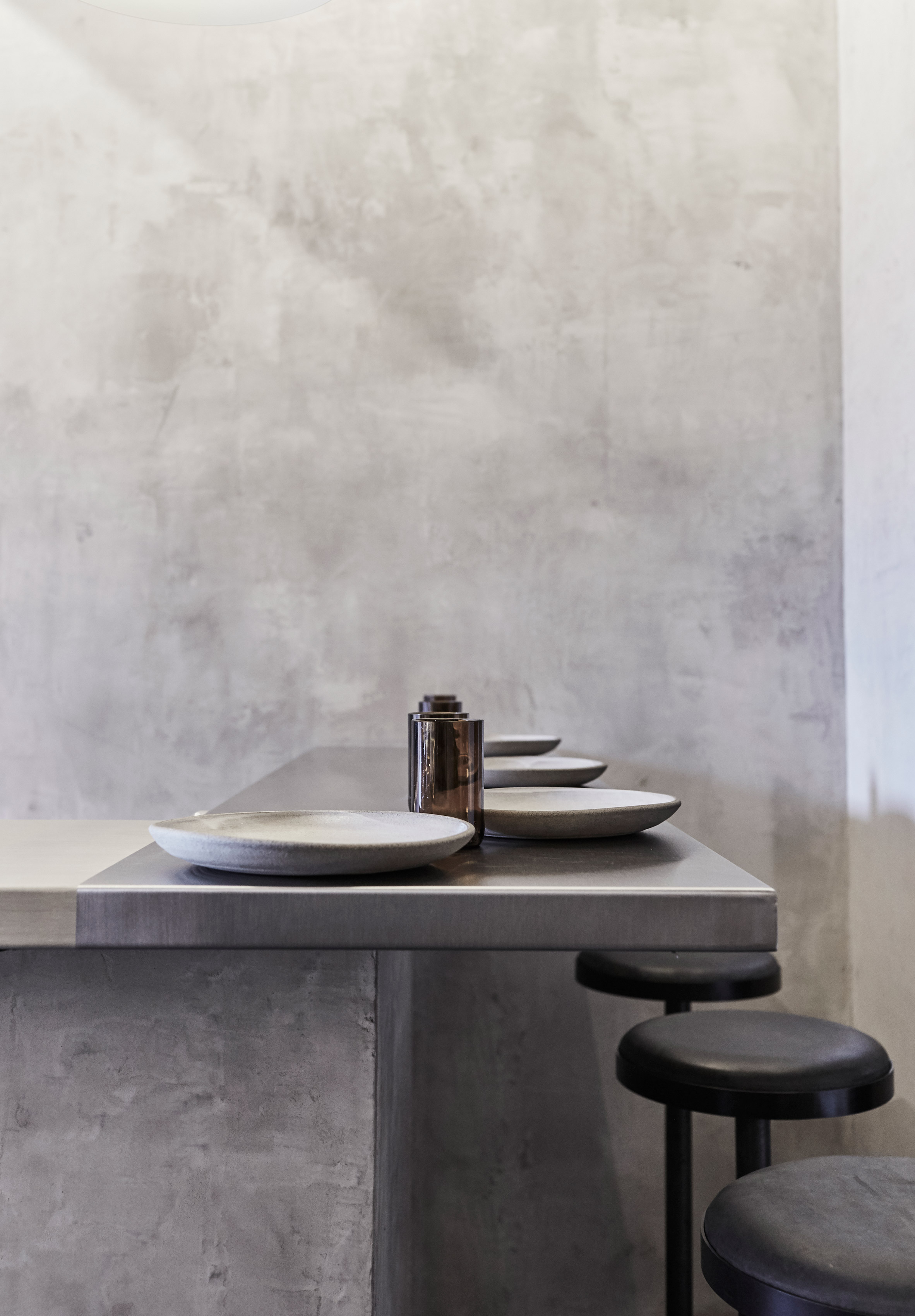 As diners enter the space they arrive at a brushed stainless-steel bar located on the left.

Three black-steel tables and concrete seating booths with brown leather cushions line the wall on the right, while tall, black stools wrap around the bar counter and the large, steel-framed window that looks out onto the street. 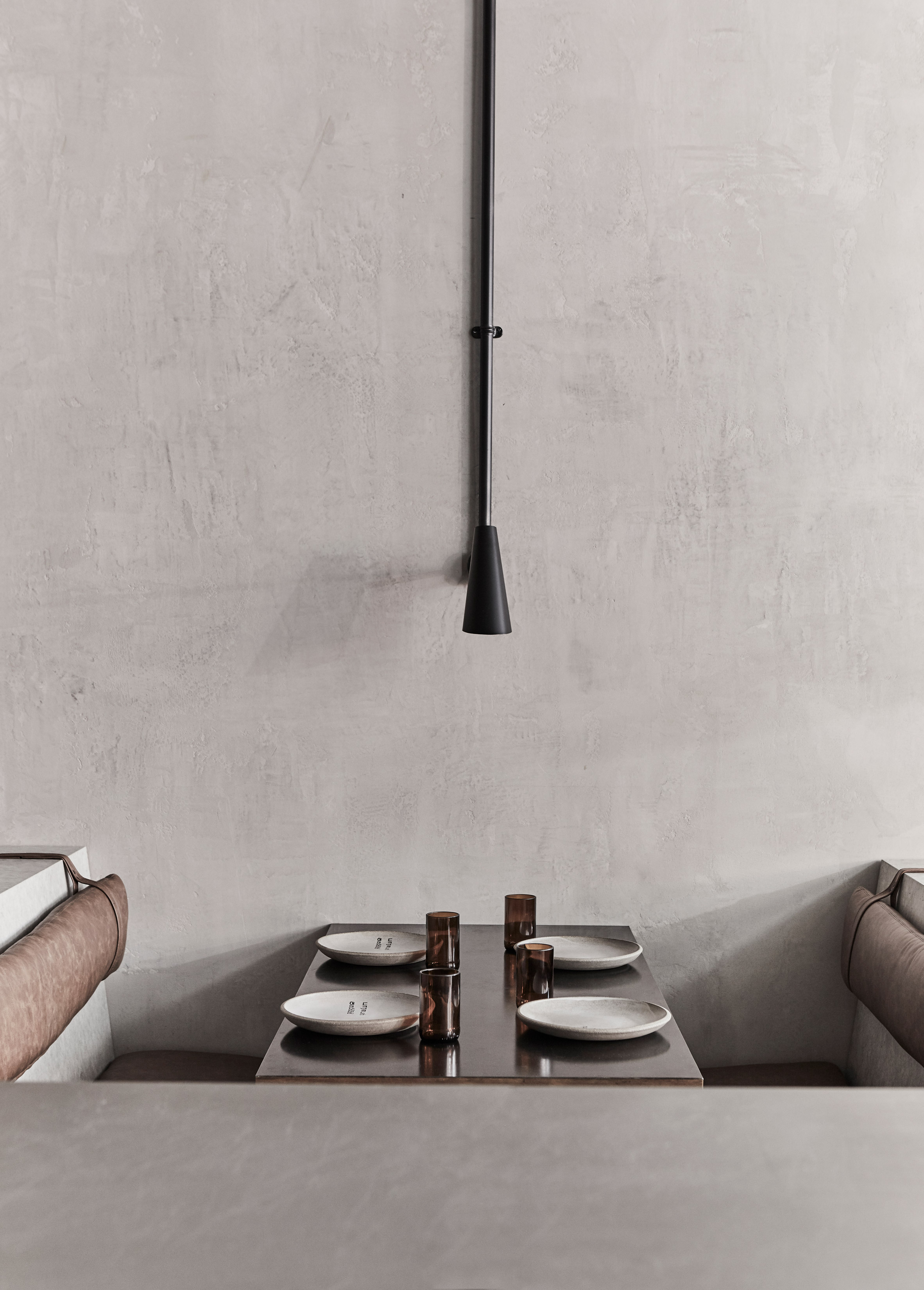 A more intimate table is positioned in a slightly raised snug at the back of the restaurant. Its walls are partially clad with terracotta tiles crafted by Stoke-on-Trent-based studio Reiko Kaneko, each imprinted with a leaf motif.

The tiles, which have been placed alongside an exposed-brick wall, lend the snug a warmer appearance in contrast to the grey cement used across the rest of the restaurant.

A collection of potted plants also run along the back of the snug and dangle down from its ceiling. 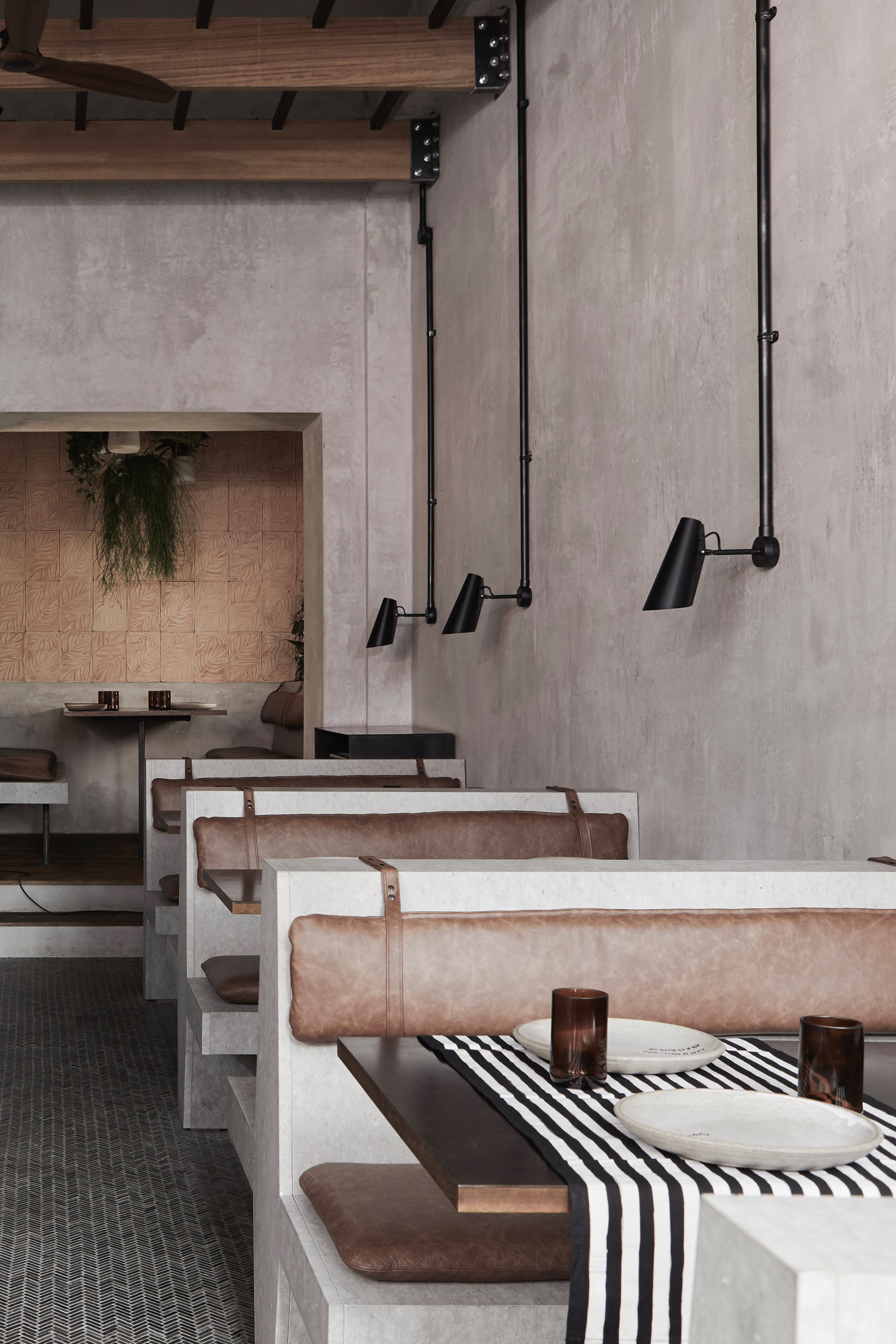 According to Preston, one of the most challenging aspects of the project was fitting everything into the restaurant’s small floor area.

“The decision to use banquette seating was certainly a breakthrough moment as this began to free up the space, and we created a very necessary 40 millimetres which was imperative for the design layout to work – it really was that tight on space!” 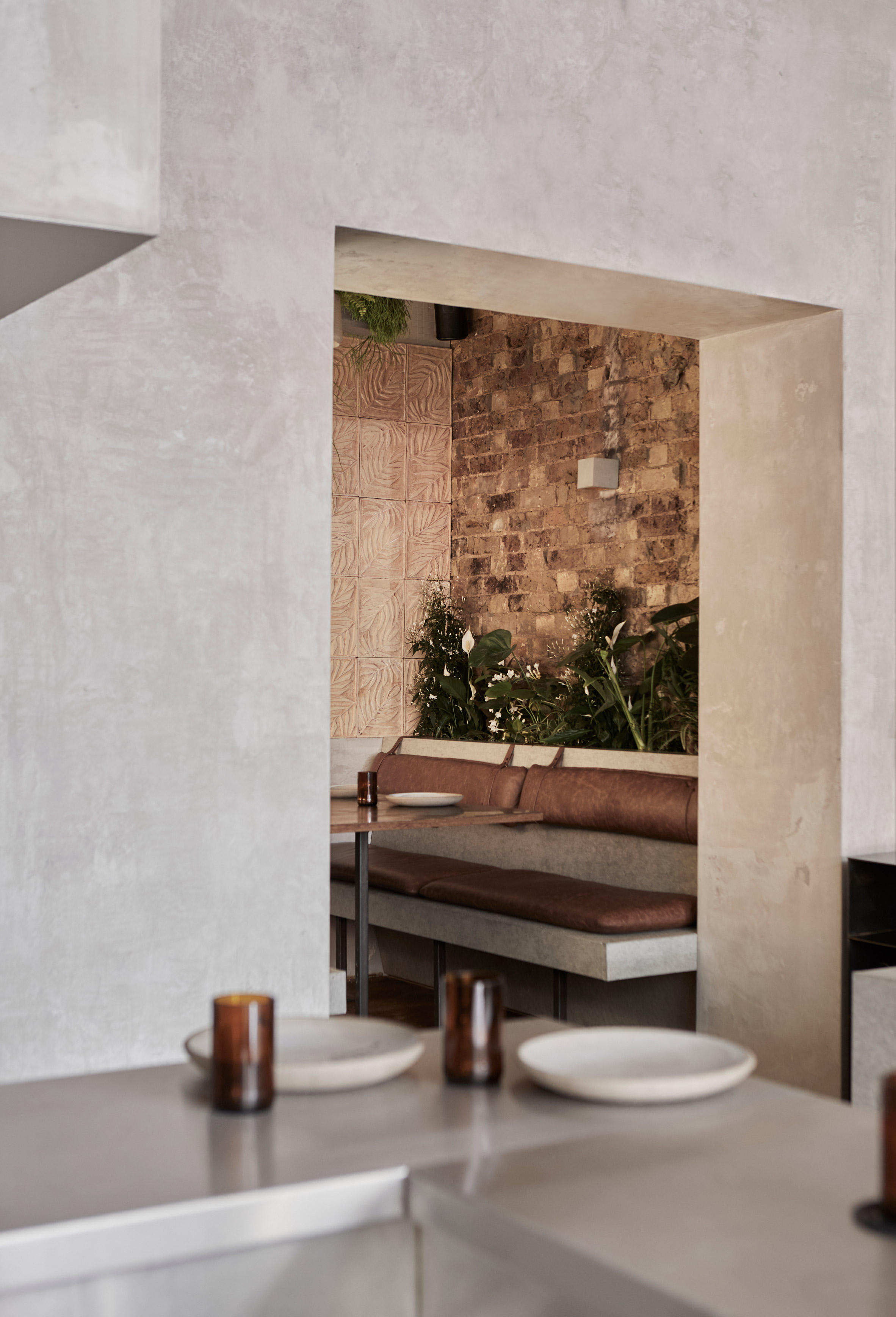 Dan Preston Studio is based in east London and works across interiors, furniture and product design.

Its Paradise project adds to the abundance of design-focused eateries that populate Soho – others include Dirty Bones, which channels the glamour of Studio 54, and Lina Stores, which boasts pastel-striped surfaces.