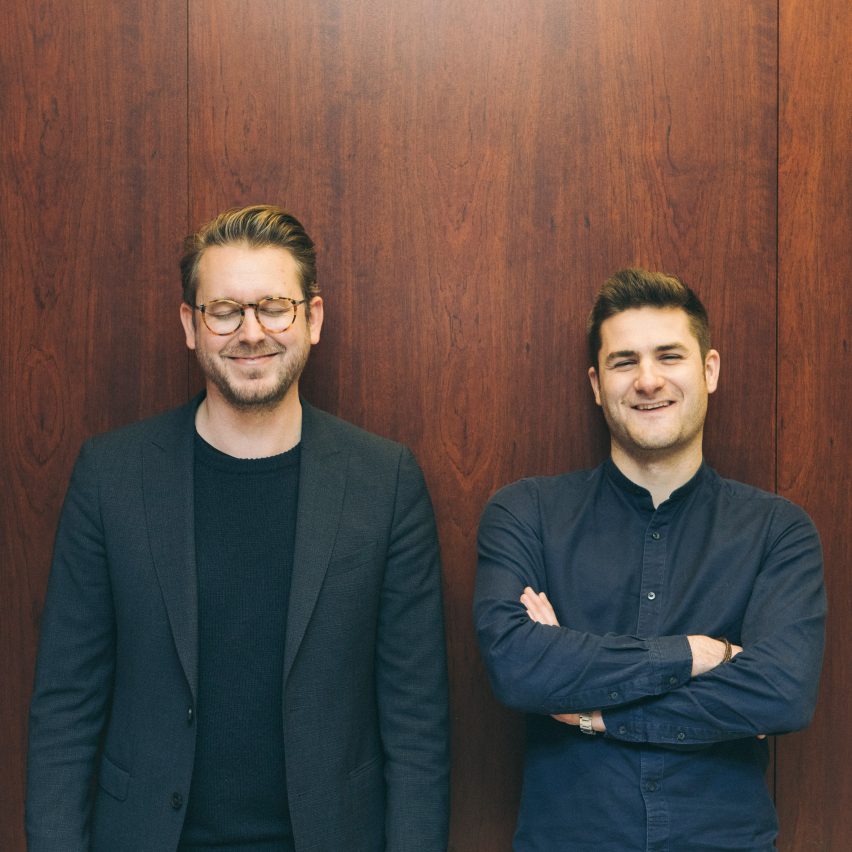 The founders of Fosbury & Sons explain to Dezeen how their fast-growing roster of spaces offer a more “grown-up” and personalised take on co-working than those of leading competitors like WeWork.

Established in 2016 by Stijn Geeraets and Maarten Van Gool, Fosbury & Sons has opened a series of co-working spaces across the Belgian cities of Antwerp and Brussels.

The company has recently gone international, opening a canal-side branch in Amsterdam, and has plans to launch a further three locations by the end of this year – a success that the founders put down to their strong “dialogue” with each property’s setting and occupants.

“What you see at WeWork is good and I think we can exist next to each other, but if you’re in a WeWork, the spaces in Amsterdam kind of look the same in Berlin,” Geeraets and Van Gool told Dezeen in an interview.

“Every [Fosbury & Sons] location looks different. It’s based on the original building, it’s based on the city we’re in. So it gets personality from the building and the people working in it.”

“It’s an exercise in being humble and open to what the city and location gives us, instead of forcing yourself into a framework. And understanding the needs of the other party – therefore you need to listen,” they added.

“WeWork is a lot of shouting. When people shout, they are not listening.”

Geeraets and Van Gool also think the sophisticated aesthetic of their spaces – which are typically decked out with bespoke furnishings, dramatic light fixtures and contemporary artworks – helps set them apart from the bean bags and ping-pong tables seen in other co-working offices.

“We’re not building a playground for kids, we’re building a working environment for mature, grown-up human beings to do their job,” they added.

“The future of work environments is not open-plan”

Geeraets and Van Gool went on to discuss how they speak extensively with prospective members of each new Fosbury & Sons location to get a clear picture of the various ways in which they work.

The pair also closely consider what they describe as the “four basic functions of the brain: individual work, collaborating, focused work – really diving deep into a matter – and rest. The brain needs to rest”.

“It’s like a date, you really want to get to know each other. Otherwise, the solution will be off and the proposal will be far away from what they have in mind,” said Geeraets and Van Gool.

The pair also feel that open-plan offices, which have been widely adopted, don’t work in every context.

“The future of work environments is not open-plan. It’s really about getting to the dialogue, on an individual and team basis,” the said.

As a result, every branch features a mix of private offices, closed-off booths, and sprawling lounges dotted with plush sofas where individuals can casually work and hang-out throughout the day.

Becoming familiar with clients also helped Geeraets and Van Gool ensure they have the right mix of professionals in Fosbury & Sons properties.

“We don’t want to be a design ghetto, or a tech ghetto or startup ghetto – creativity arises when you get things together from different places and you can connect the dots,” they added.

“Whether it’s a lawyer, or financial guy or corporation selling vacuum cleaners, that actually doesn’t matter. It’s a kind of mindset, the emotional intelligence that the people of the company have.”

“You have to accept it will never be finished”

Plenty of research was also required before doors were thrown open to the inaugural Fosbury & Sons branch in Antwerp.

Coming together in what they describe as an “atelier-like” process, Geeraets and Van Gool spent 18 months meeting, travelling and drafting ideas to consolidate their concept of the company.

Geeraets, in particular, wanted to create something that was far from the bleak, light-starved offices where he had worked in the past, “drinking coffee out of a plastic cup”.

“We had something in mind, but we didn’t know what it was – it wasn’t clear,” they explained, “it was about visiting places, finding balance between different products, looking at service level, space needs, design, budgets, income costs.”

But despite having the “building blocks” to Fosbury & Sons, the duo believes there’s always room for improvement in the trio of spaces that are set to open in 2020.

One will be set inside a former warehouse in Amsterdam’s Westerdok neighbourhood, and another property will be in Antwerp. The third branch will be located at the port of Valencia, Spain.

“You start evaluating what can be better, what do we have to do differently – it’s a process that will be going on and on and on,” they concluded.

The post “We’re not building a playground for kids,” say founders of Fosbury & Sons appeared first on Dezeen.