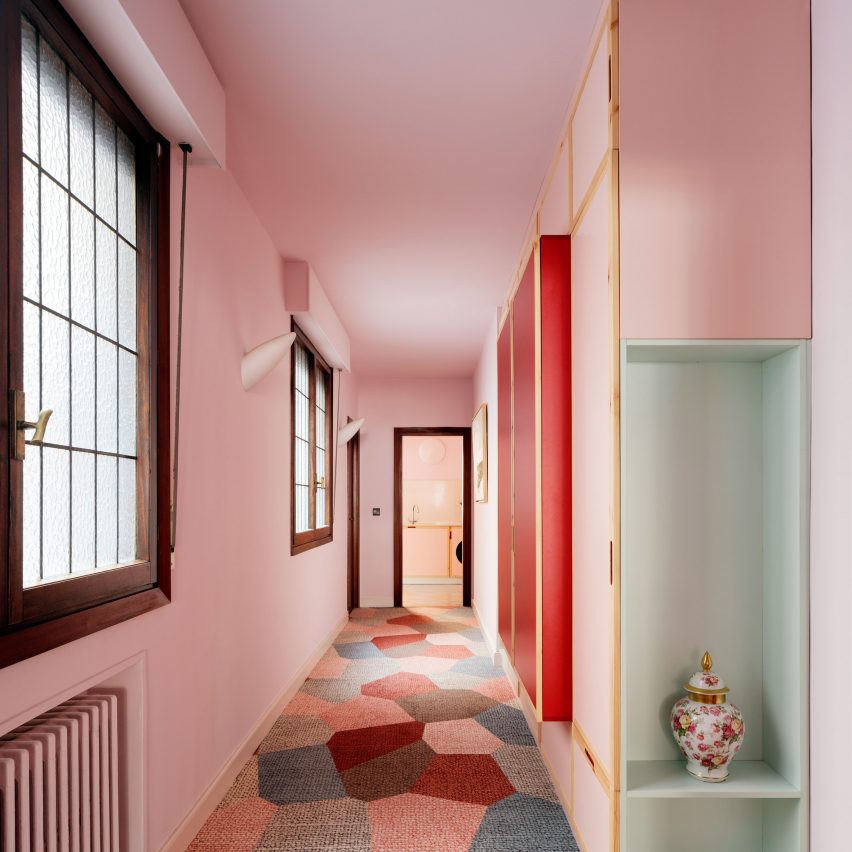 A baby-pink kitchen and a colourful patchwork carpet help revive the interior of this formerly lacklustre 1960s apartment in Bilbao, Spain, which has been overhauled by architecture studio Azab.

Since its construction in 1968, the Mixtape Apartment had undergone a couple of renovations that had “gingerly affected” the flow of its floor plan but left behind a number of original decor details.

Its current owner – a retired woman – approached Azab to refresh the apartment, which she felt had become “blurred in a greyish mood”. 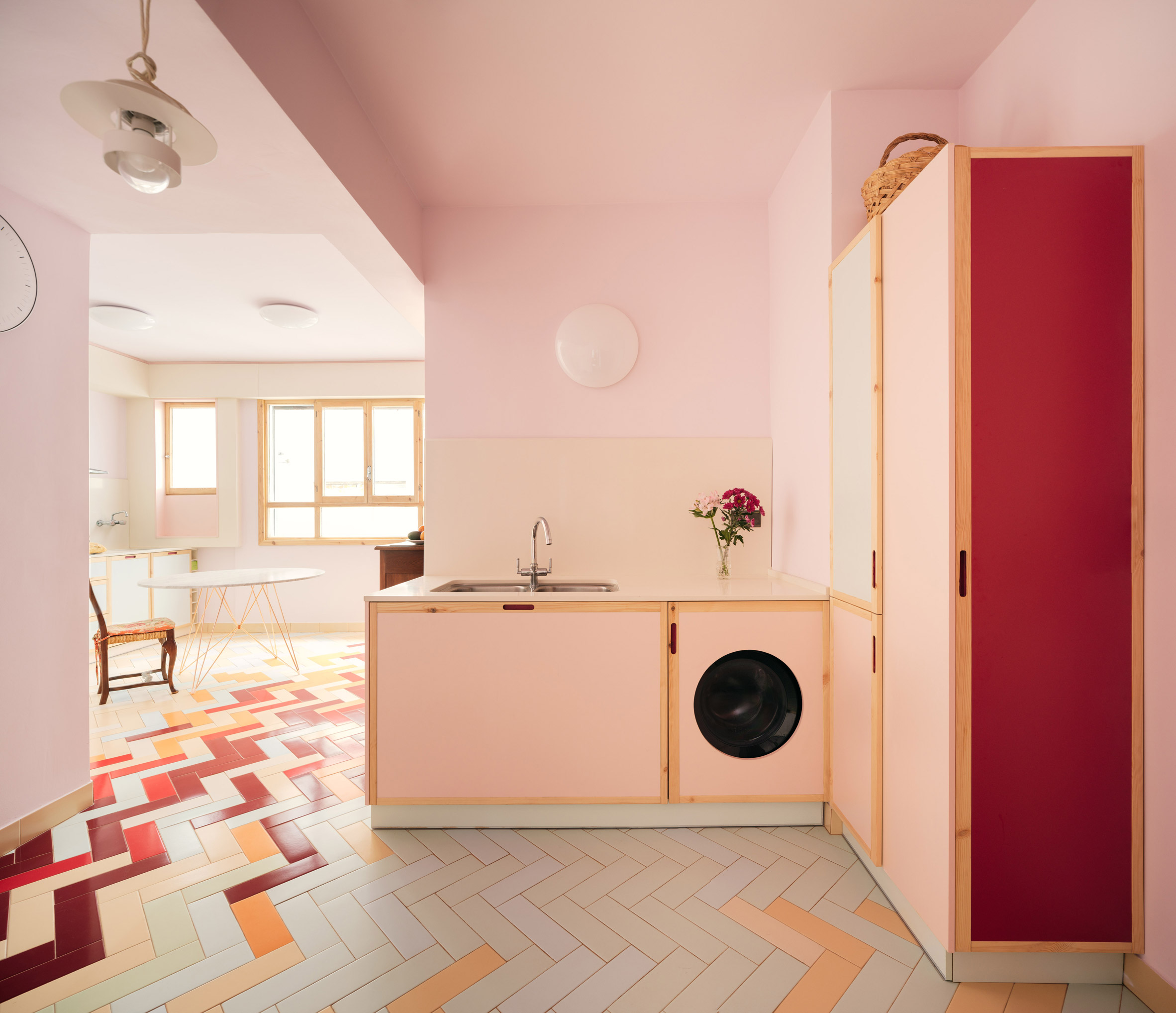 “She related having a certain feeling of boredom… in some way she felt that her home was dying away and was trying to find out how to imbue it with new vitality,” the studio told Dezeen.

“But from the beginning we understood that there were so many valuable elements.” 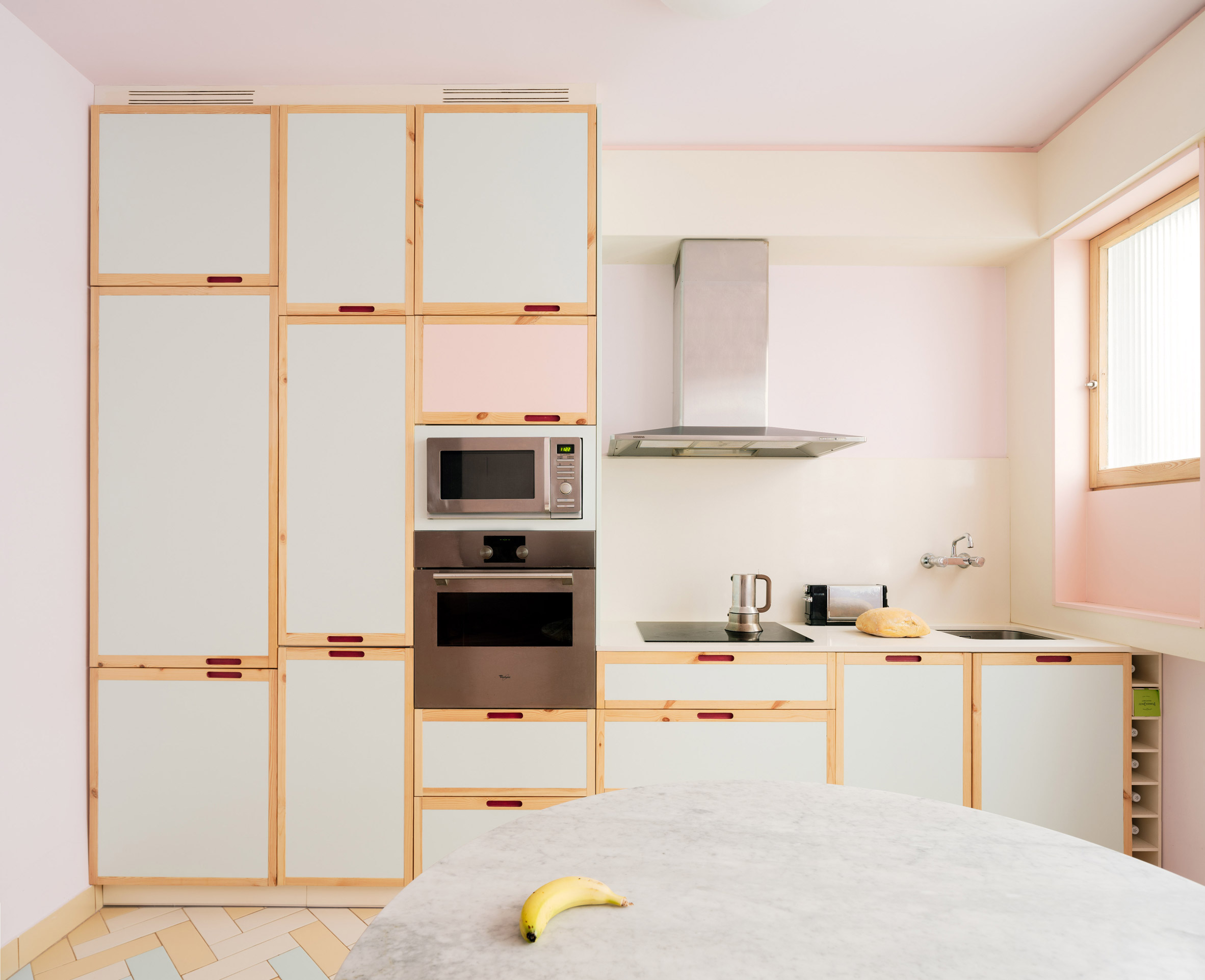 The studio decided to update the home with just a few standout features that would complement the existing hardwood floors, doors, and window frames.

In the kitchen there is now a mix of baby-pink and white cupboards, each of which is bordered by light-hued strips of timber. Pink paint has also been applied across the surrounding walls and to appliances like the dishwasher. 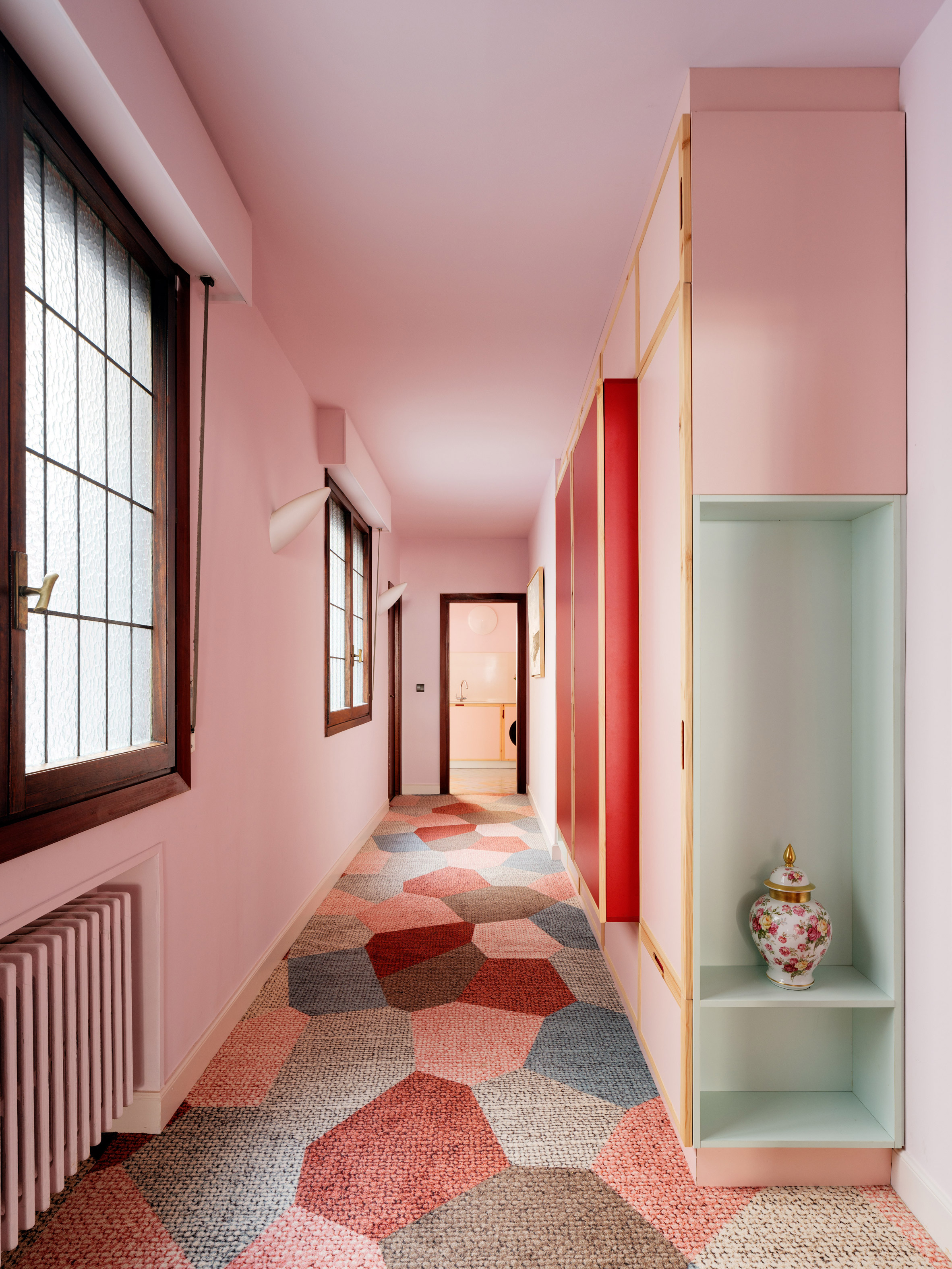 Tiles have been arranged in a herringbone pattern on the floor. Some of them are peachy orange or minty green, while others are cherry red – a nod to the colour of the communal staircase that lies at the centre of the apartment block.

The same palette of colours has been applied throughout the adjacent corridor, an attempt by the studio to visually unify the apartment’s living spaces and create a sense of “sincere domesticity”. 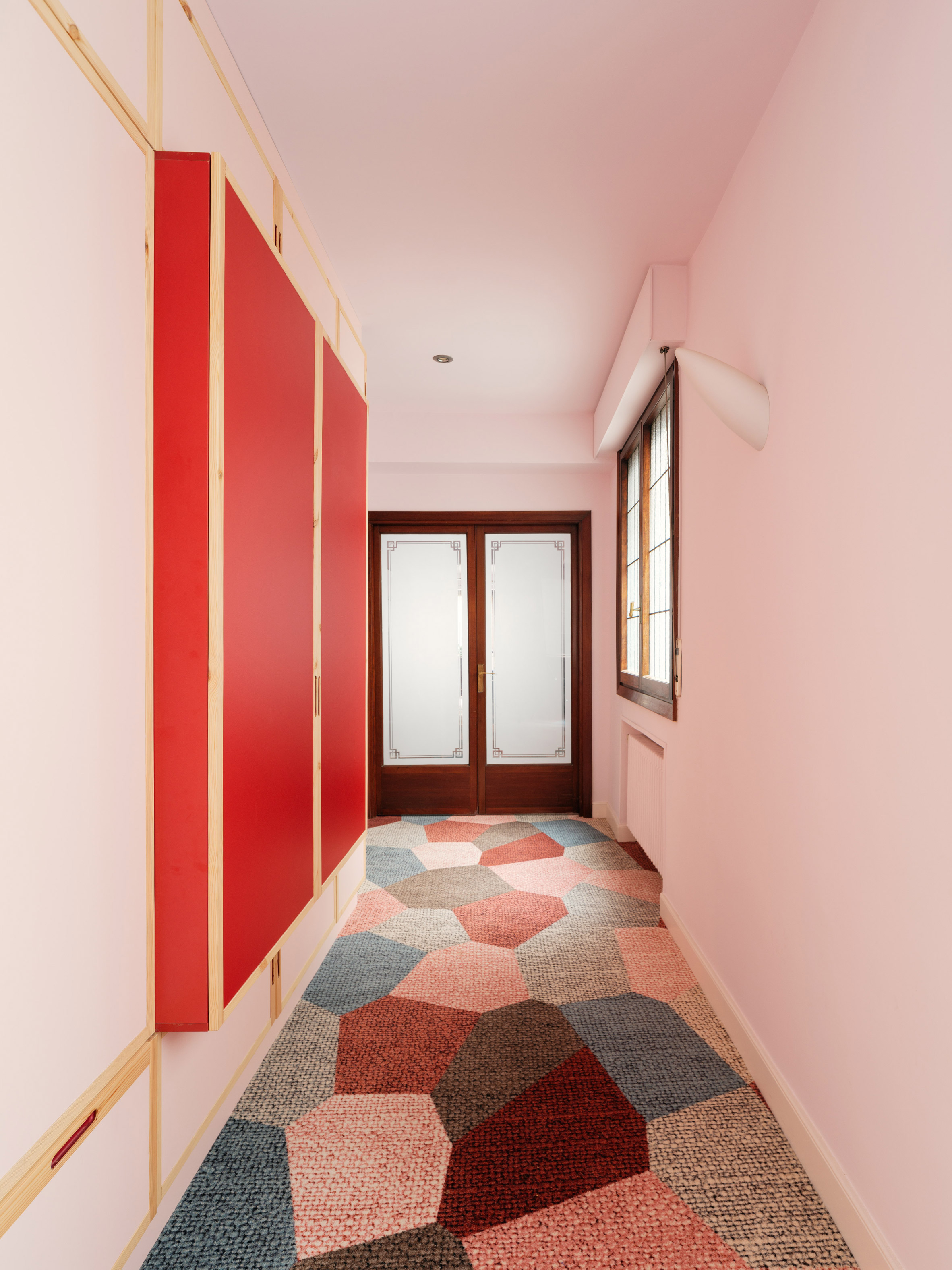 As well as extra storage units and display niches for personal ornaments, the corridor has also been fitted with a colourful carpet which features pink, blue, grey and red patches.

“The use of colour serves to generate a serene and optimistic atmosphere at the same time,” explained the studio.

A few partitions have also been knocked through to form a bigger opening between the kitchen and the living area, which can be closed off by sliding doors. 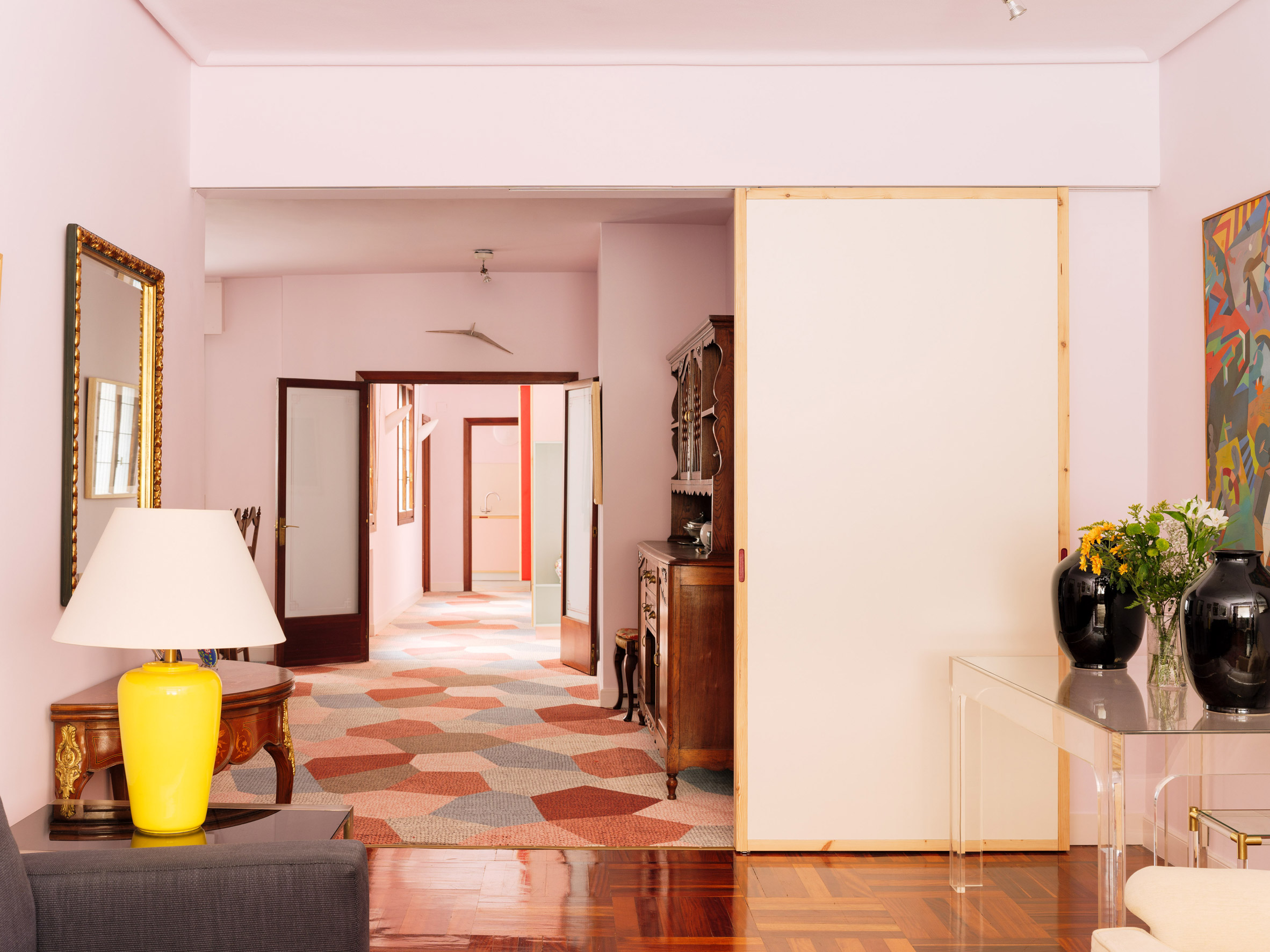 The Mixtape Apartment isn’t the only project that the studio has completed in its home city of Bilbao – last year it revamped an attic apartment to make it suitable for a young family of four, adding bright yellow walls and under-floor storage.

Photography is by Luis Díaz Díaz.

The post Bilbao's Mixtape Apartment has a baby-pink kitchen appeared first on Dezeen.