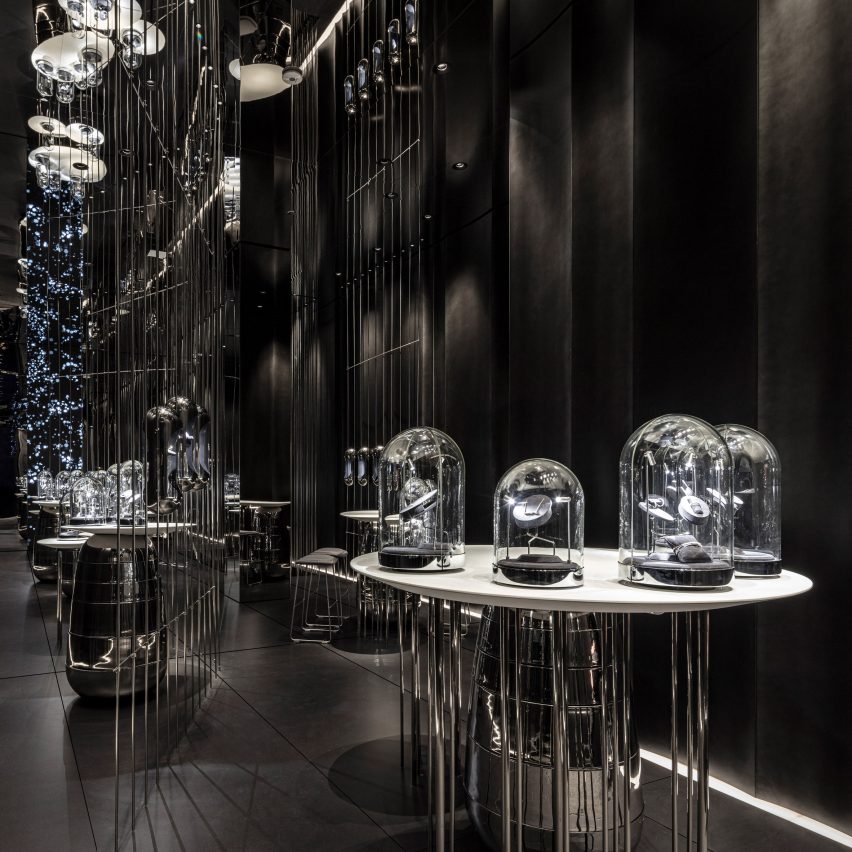 The narrow store for jewellery brand Âme on Spring Street was designed by Israeli practice Baranowitz + Kronenberg as a “sensory retail experience” informed by darkness, materiality, scent and sound. 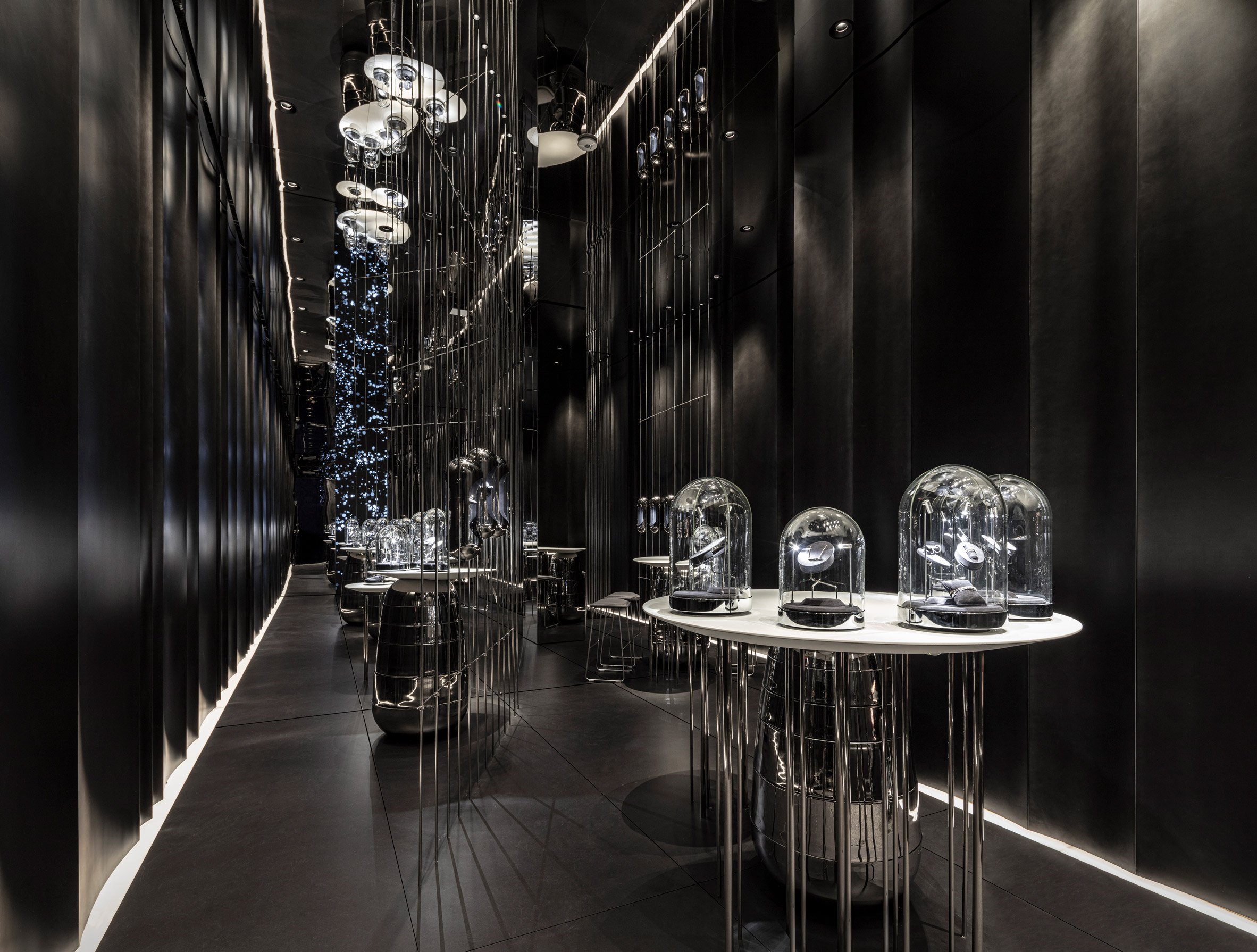 The walls of the monochromatic, charcoal-coloured store are made from rolled-stainless-steel panels which contrast with the stainless steel display units. The material was chosen for its industrial past and contemporary look.

“The main theme of the design of the store is the combination between past, present and future,” said the practice’s co-founders, Alon Baranowitz and Irene Kronenberg.

“This project follows our design philosophy that has been our guiding light for two decades. We come, observe and look at the findings with an open mind while scrutinising every contextual insight.” 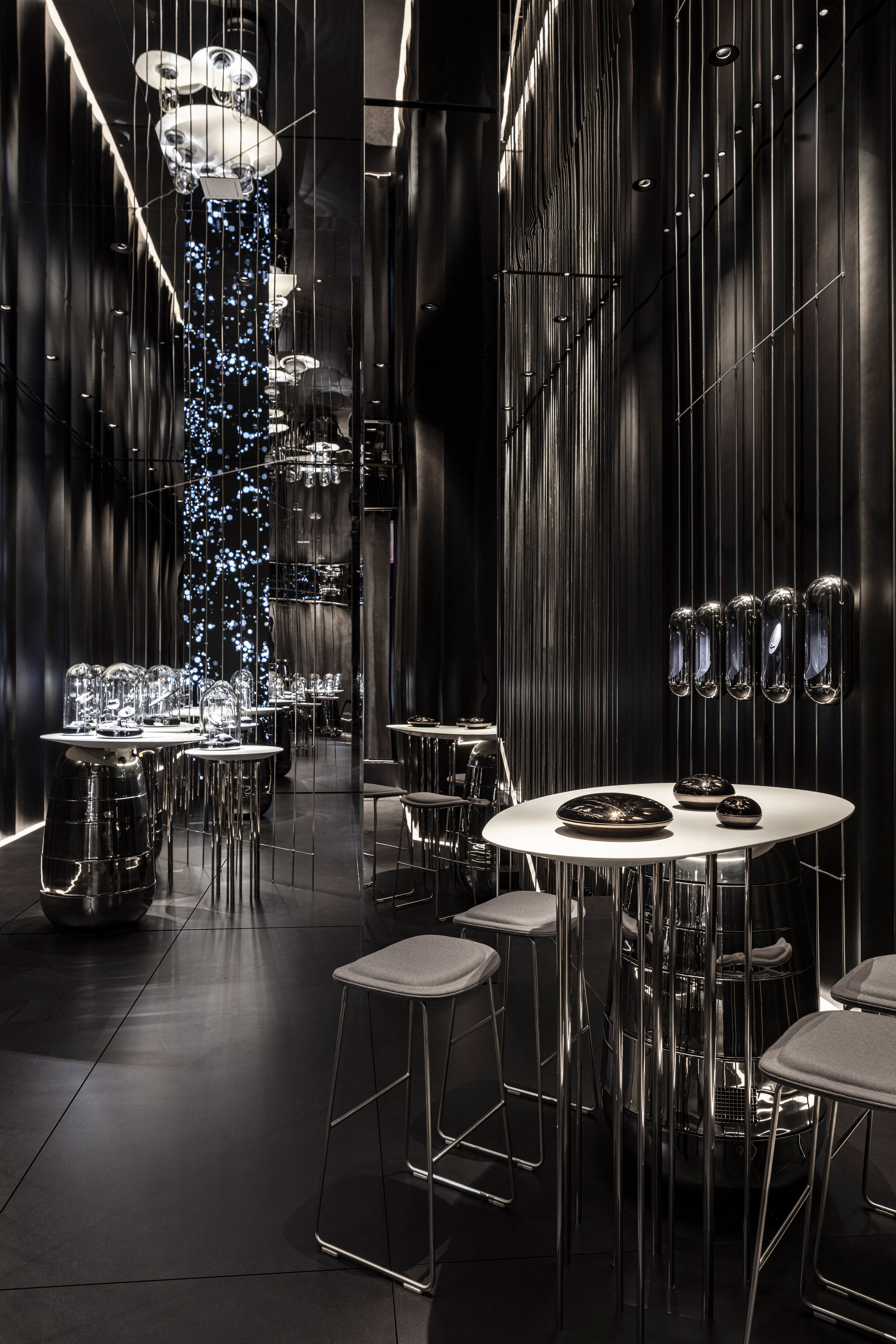 The duo sought to contrast the decorative architectural style of buildings in Soho with the technological process of making diamonds in a lab – rather than mining from the earth.

“The duality of the historic architecture of Soho, New York with the cutting-edge modern design, inspired by this very architecture, creates an entirely new impression and reflects the very soul of Âme,” they said.

According to the studio, the steel walls are representative of shadows cast from undulating cast-iron facades found around the Lower Manhattan neighbourhood. 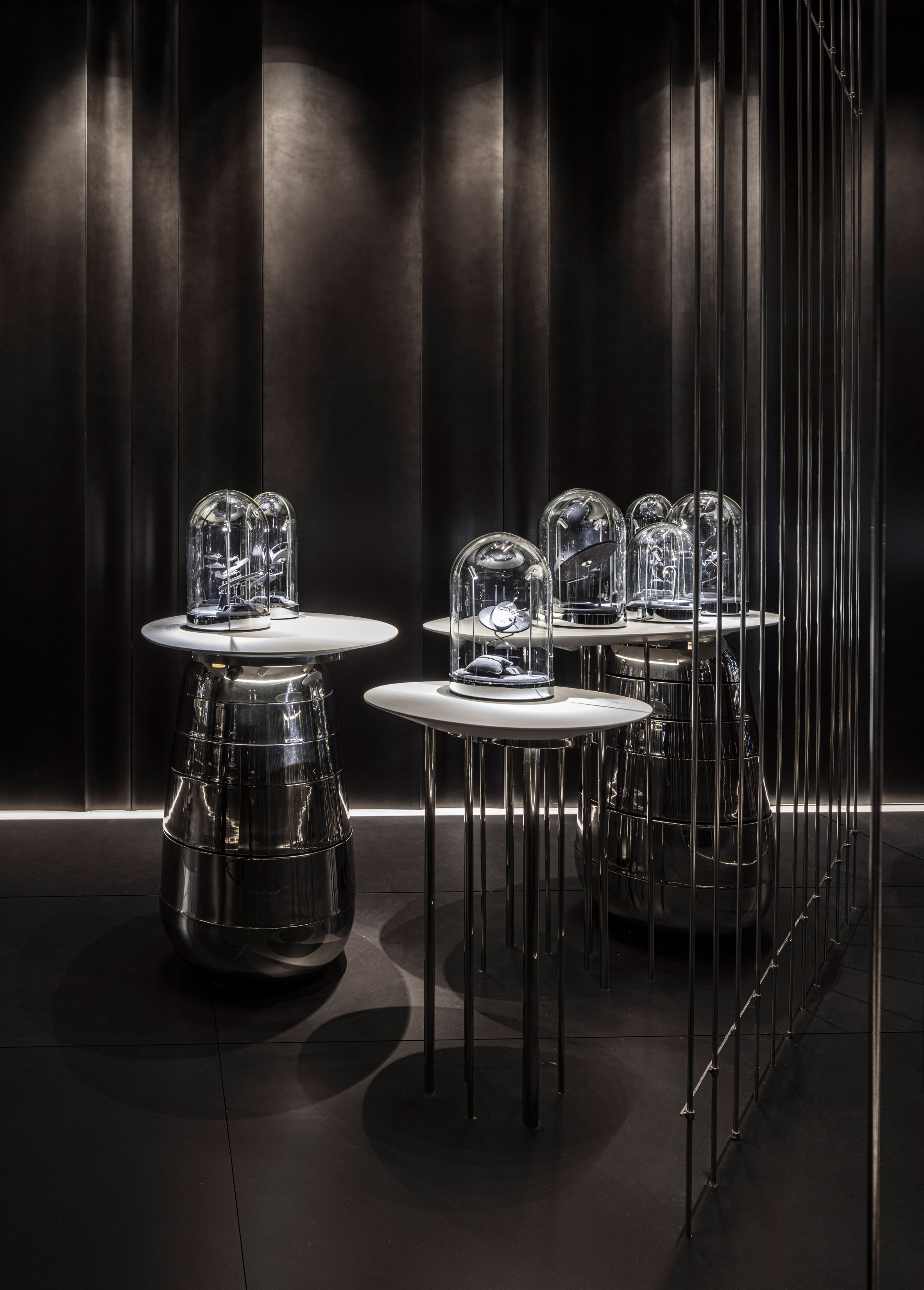 Within the store a series of vertical rods span from the floor to the ceiling to act as dividers, while the jewellery pieces that all contain synthetic diamonds are displayed in clear glass vessels, called cloches.

“Each piece of jewellery is uniquely housed inside their own capsules and state-of-the-art glass cloches, inviting the impression that it is served rather than displayed,” said the studio.

The cloches rest on tables with white countertops and silvery bases, designed by Baranowitz + Kronenberg and produced by Design SRL. The stands are metallic and made in different styles, from bulky volumes to ones with slender rods.

Scent is also used to enhance the sensorial experience, and a fragrance with earthy, smoky notes was custom-made for the store by British perfumer Azzi Glasser.

“I wanted to capture the essence of the growing diamond, through its faceted layers,” Glasser said. “Entwining the fragrance notes, whilst layering the accords, and amplifying the essence of luxury through the finest molecules into the air.” 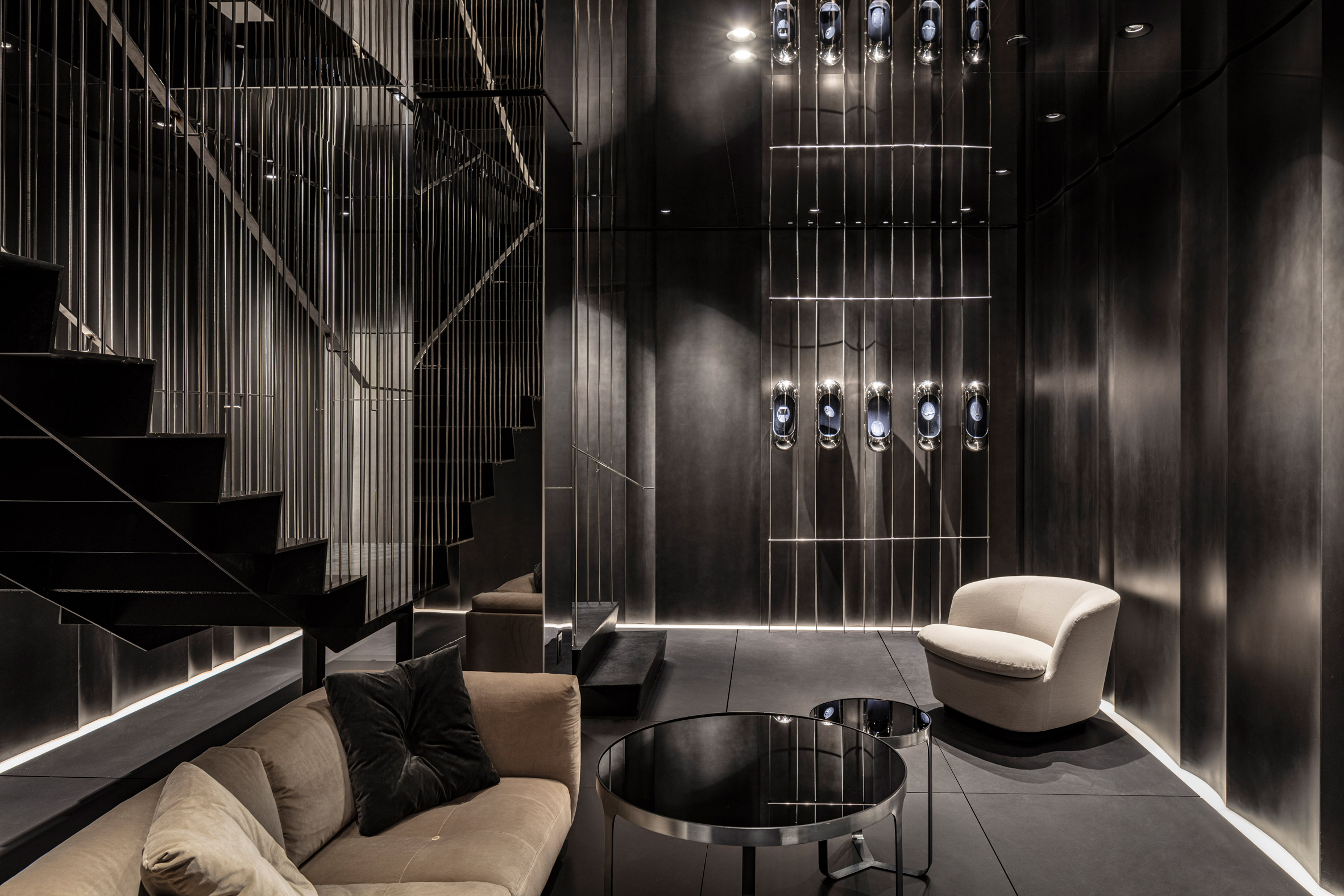 Below the store’s main retail space, the basement contains a seating area with a sand-coloured chair and sofa by Living Divani that contrast the otherwise dark space. An industrial staircase with a black rod balustrade wraps around a reflective column. Blue light fixtures by Tel Aviv studio RTLD also feature on the walls.

An office, storage space, kitchenette and restroom are also located on the lower level. 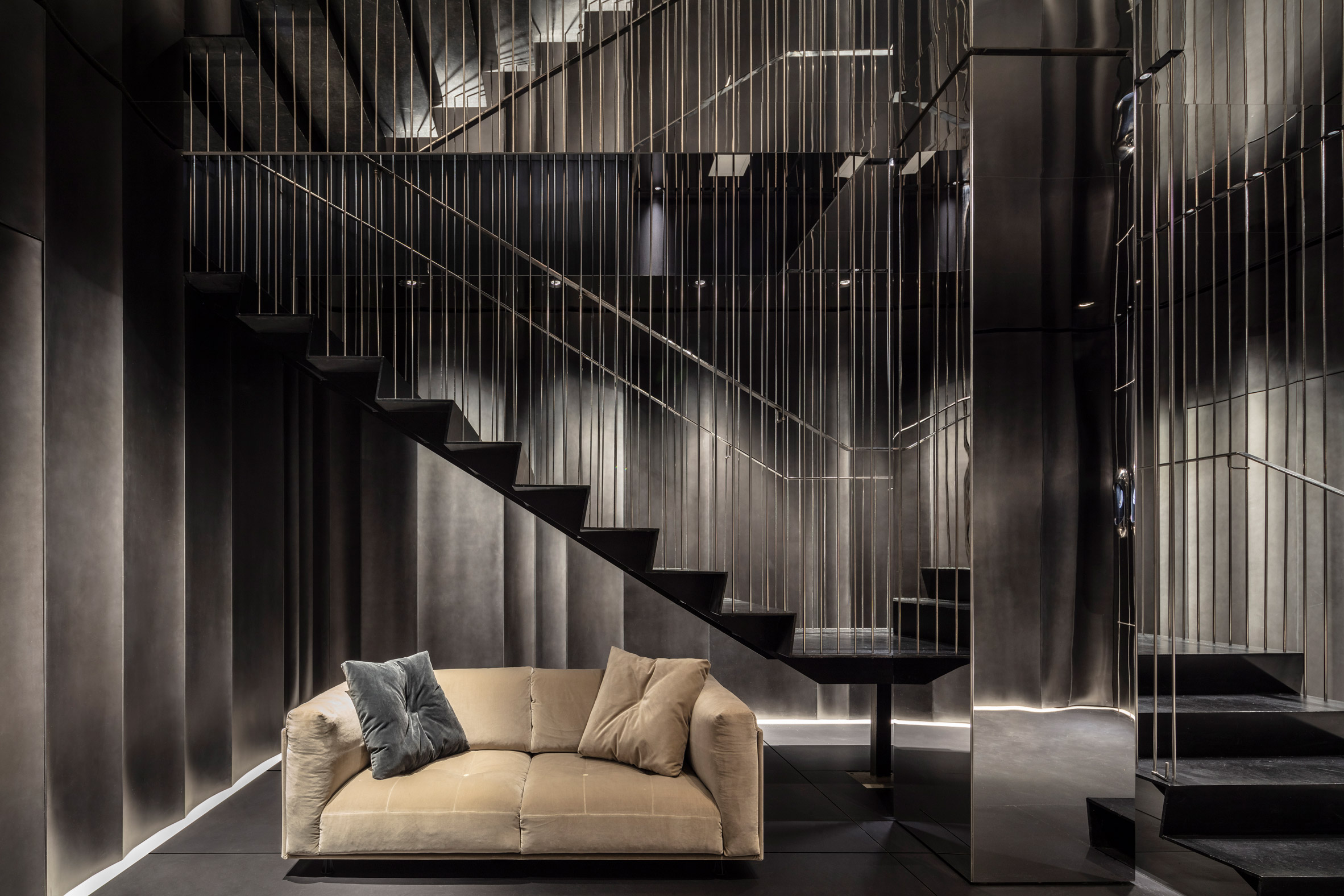 Baranowitz + Kronenberg was founded in 1999, and other examples of the architecture studio’s work are an upscale eatery Yaffo Tel Aviv, the W hotel in Ibiza, and The Duchess restaurant and bar in Amsterdam.

In addition to Âme, Soho is home to hundreds of retail stores such as Glossier by Gachot Studios, Everlane on Prince Street, Wardrobe NYC and London streetwear label Maharishi.

Photography is by Amit Geron.