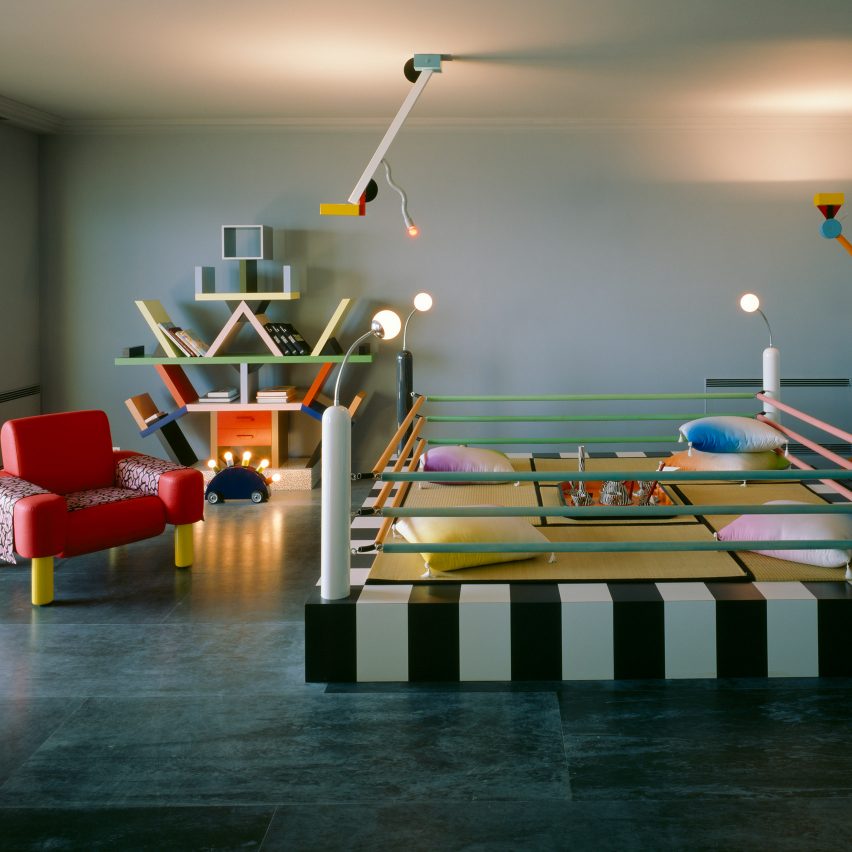 The Vitra Design Museum exhibition sets out to stimulate conversations about the private residence – a space which the museum’s director, Mateo Kries, and assistant curator, Anna-Mea Hoffman, think has unfairly been omitted from “serious discourse”.

“With architecture, there’s a mass of magazines, zines, blogs and everything – and in interiors, there’s nearly nothing,” Kries told Dezeen.

“I think there’s several reasons: one is probably that architects do houses, designers do objects, but the people that do interiors are sometimes architects or designers – and then they see it at the periphery of their main work.”

“Domestic interiors are also just simply not as accessible – architecture can be judged by everyone,” added Hoffman.

Hoffman and lead curator Jochen Eisenbrand decided to base the exhibition around 20 exceptional interiors that they felt would provide a comprehensive overview of the history of western domestic design.

The interiors are represented by a selection of furniture pieces, drawings, short films or models, and have been purposefully arranged in retrospective order.

“We always hope that we can learn from the past,” said Hoffman.

“I think the interiors that we’re living in today consist of many layers. I think going in the past with the exhibition is just trying to dig into these layers,” added Kries.

The first room of the exhibition – titled Space, Economy and Atmosphere – focuses on interiors completed from the year 2000 to the present day, and how they address some of contemporary society’s most pressing issues.

On display is a scale model of architecture studio Elii’s Yojigen Poketto apartment – fitted with built-in furniture and under-floor storage, the 33-square-metre home was designed to counter the increasing scarcity of space and affordable property in urban cities.

Another portion of the room is dedicated to Granby Four Streets, a project that saw creative collective Assemble conserve and repurpose a row of dilapidated houses in Liverpool that were threatened by demolition.

The room also notes the ubiquitous nature of IKEA – one wall is mounted with vintage issues of the furniture company’s catalogues, while one of its flat-pack cabinets has been suspended from the ceiling.

Visitors then wander through to the second exhibition space, Rethinking the Interior, which looks into the living methods and bold aesthetics that emerged between 1980 and 1960.

Standout projects featured in the room include late fashion designer Karl Lagerfeld’s pied-à-terre in Monte Carlo, which was filled with Memphis furniture – a movement considered unusual at the time for its use of bright colours and pattern.

One wall is also mounted with a huge image of artist Andy Warhol’s Silver Factory. Considered by the curators as an early example of loft-style living, the foil-covered home blurred the boundaries between living quarters, film studio, workshop and hang-out spot.

The third exhibition room – Nature and Technology – concentrates on the years 1940 to 1960, exploring how interiors became more mechanised and open to the outdoors in this period.

Among the projects highlighted is Casa de Vidro. Created by Italian-Brazilian architect Lina Bo Bardi in 1951, the house has a glass facade that has uninterrupted views of Sao Paulo’s luscious green terrain.

There’s also a tan-leather iteration of designer Finn Juhl’s Cheiftain Chair on display, which takes cues from the undulating hills of the countryside.

The fourth and final room, The Birth of Modern Interiors, lays out the key domestic design concepts that were established between 1920 and 1940.

Part of the room spotlights Mies van der Rohe‘s Villa Tugendhat, one of the first private residences to have an open-plan layout. There’s also a 1:1 model of Margarete Schütte-Lihotzky’s Frankfurt Kitchen, a functionality-focused cooking suite.

This is one of the few full-scale interior replicas to appear throughout the exhibition, in which items are largely displayed on modular cork plinths created by Genoa-based studio Space Caviar.

“If you try to recreate one-to-one rooms in a museum, most of them look dusty and unused because what is lacking is the main thing – the people that live in them,” concluded Kries.

Home Stories: 100 Years, 20 Visionary Interiors will be showing at the Vitra Design Museum in Weil am Rhein, Germany, until 23 August 2020.