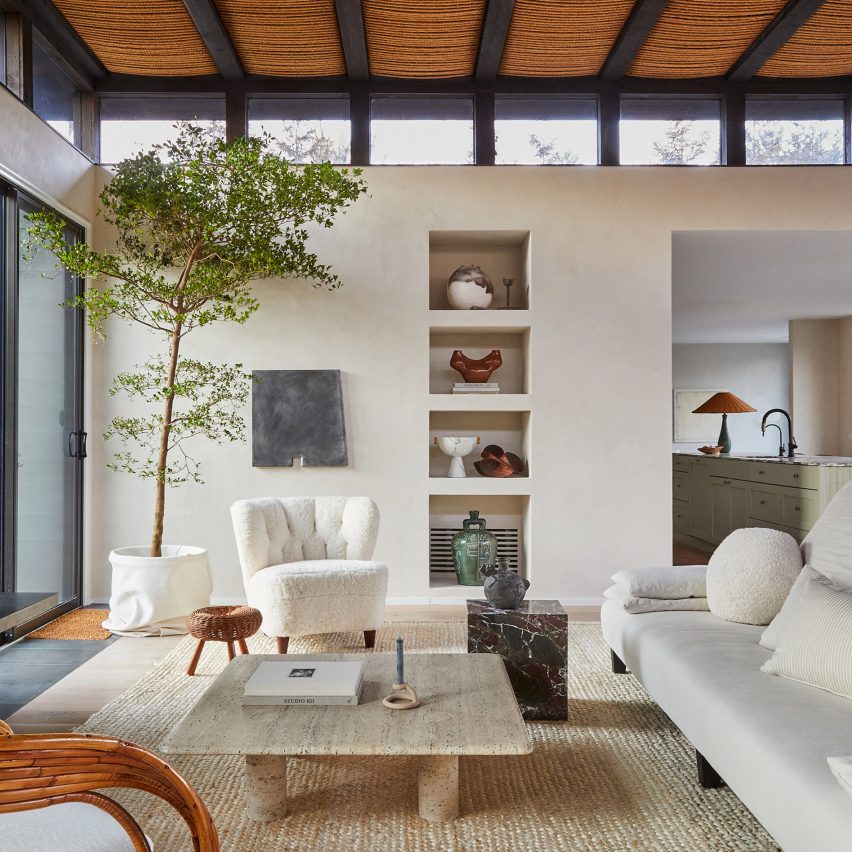 Calderone originally redesigned the house when she purchased it in 2009 with the help of her neighbour, Paul Masi, the founder of local firm Bates Masi Architects. 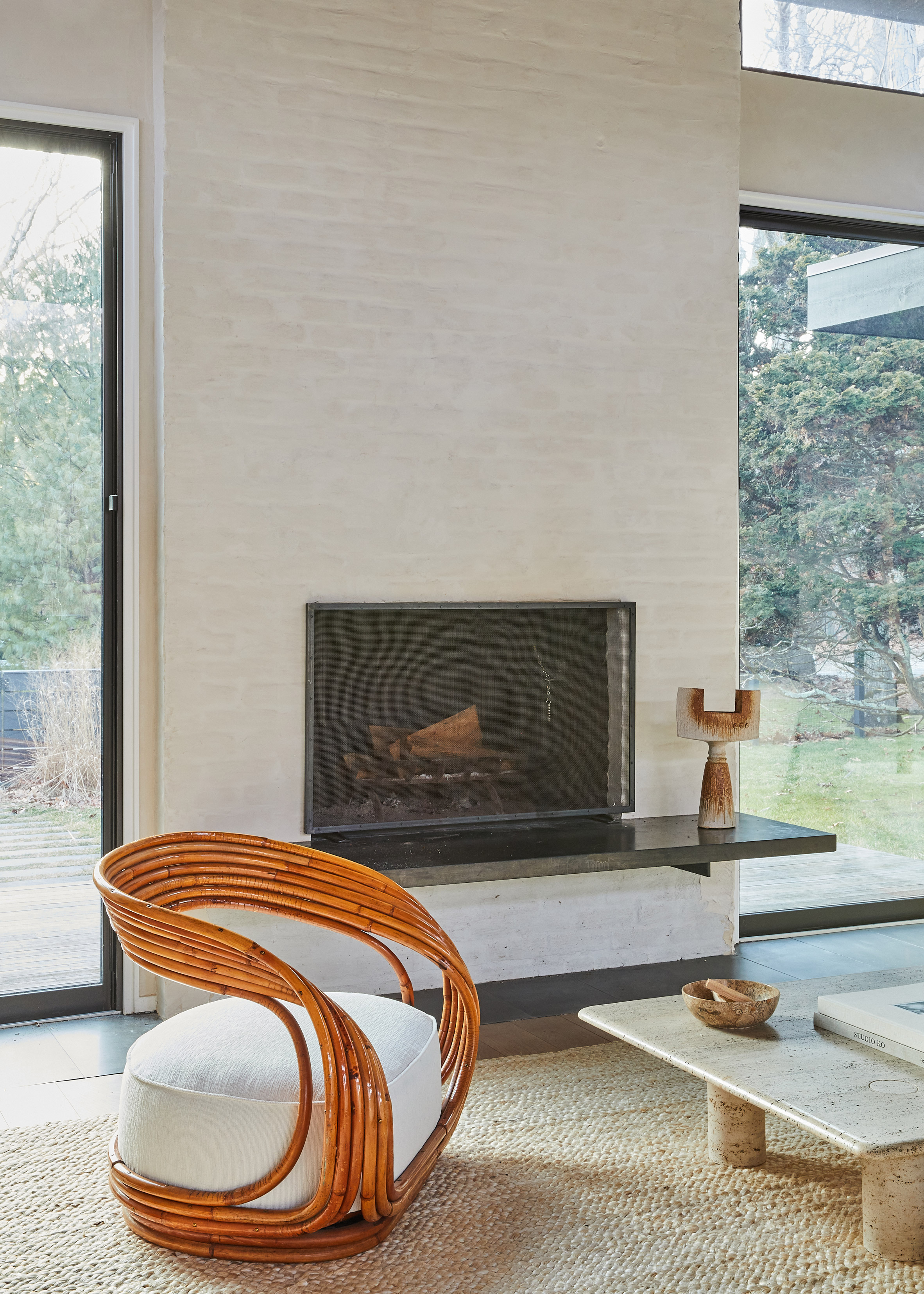 Ten years later, she has decided to revive the interiors with a pale palette and a combination of contemporary and vintage pieces. Walls are covered in plaster by Kamp Studios, which also added a fluted plaster design on a kitchen island.

“I wanted to choose new materials and new surfaces, and clad things differently and also brighten things up because everything was just feeling a little bit dark, dated and heavy,” Calderone told Dezeen.

“The walls were just crisp white, and I wanted to make them plaster and a bit warmer and creamier, so that really changed the house a lot.” 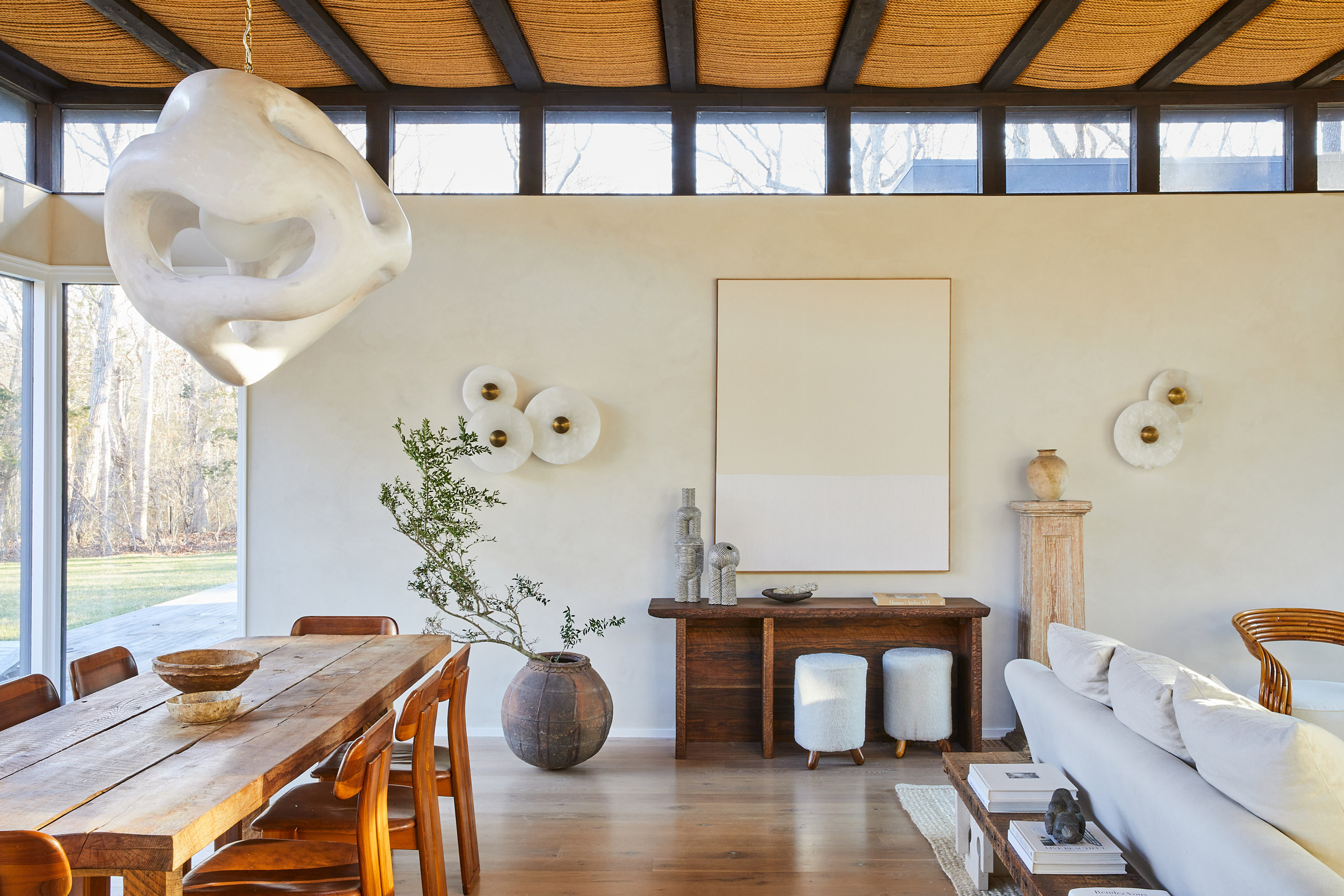 In the kitchen, Calderone has replaced reclaimed wood cabinets and shelves with hacked IKEA cabinets featuring doors and drawer-fronts by Semihandmade.

Calderone painted the cabinetry a pale green tone, Ash Grey by Farrow & Ball, that pulls from the veining on the new Calacatta Monet marble counters. “From the marble, the palette of my kitchen was born,” said Calderone. 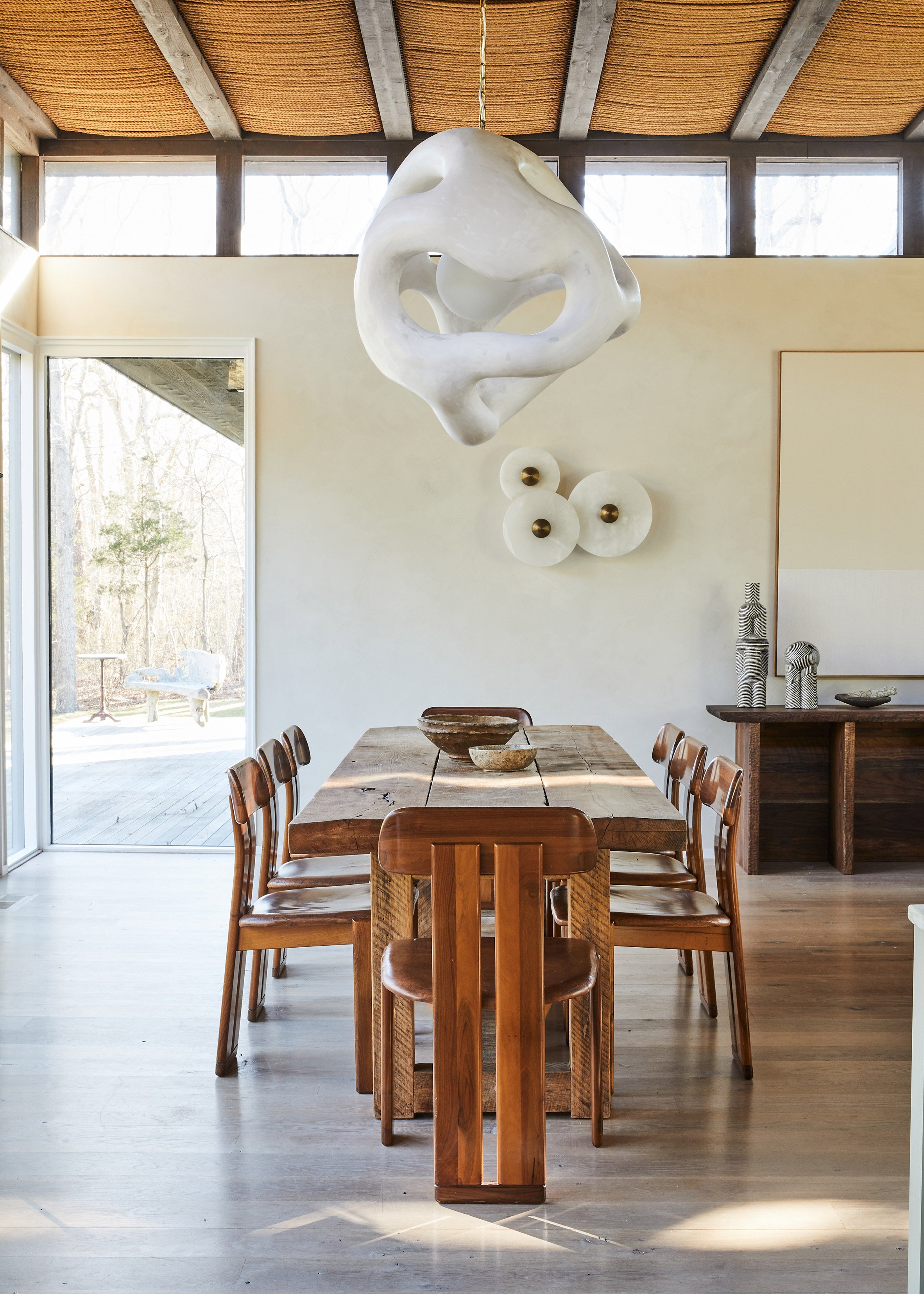 Brass hardware is intended patina over time and vintage finds include the Spanish 1970s woven rattan stools as barstools and a decorative lamp. Calderone has continued this combination of old and new across the home.

“Design is always about a balance,” she added. “It’s about the yin and the yang. It’s about the elevated being pulled down with something that feels a little more artisanal with the touch of a hand.” 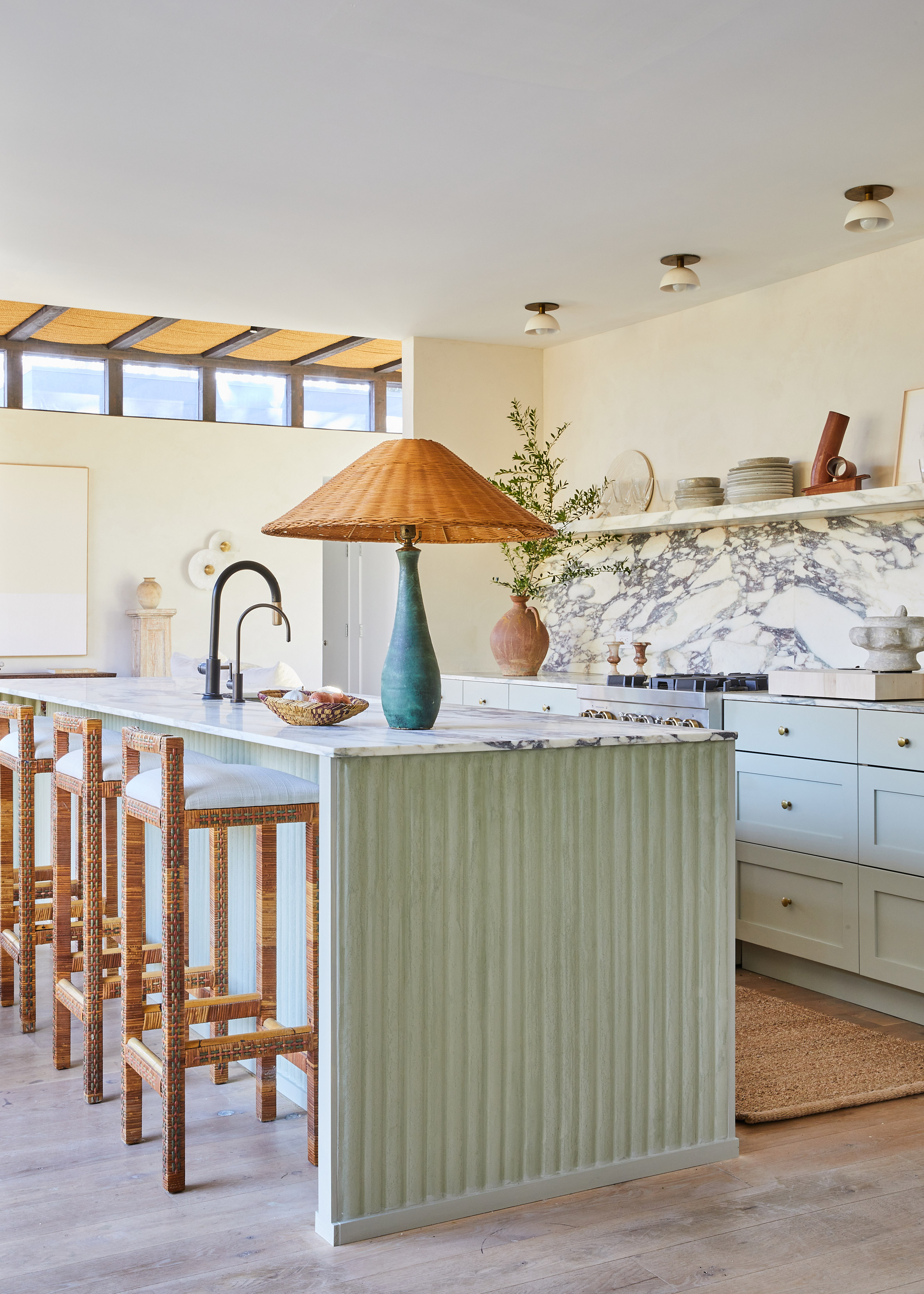 In the dining area, there is a farmhouse table surrounded by 1960s Italian Sapporo chairs made of walnut with brown leather seats. Overhead is a white, sculptural light fixture by Calderone’s friend and sculpture artist Rogan Gregory.

Vintage furniture and accessories are a major aspect of the design. “I would say probably 80 per cent of this home has vintage furniture,” Calderone added.

“I love what vintage does to home. It adds an unknown history and a timeworn patina.” 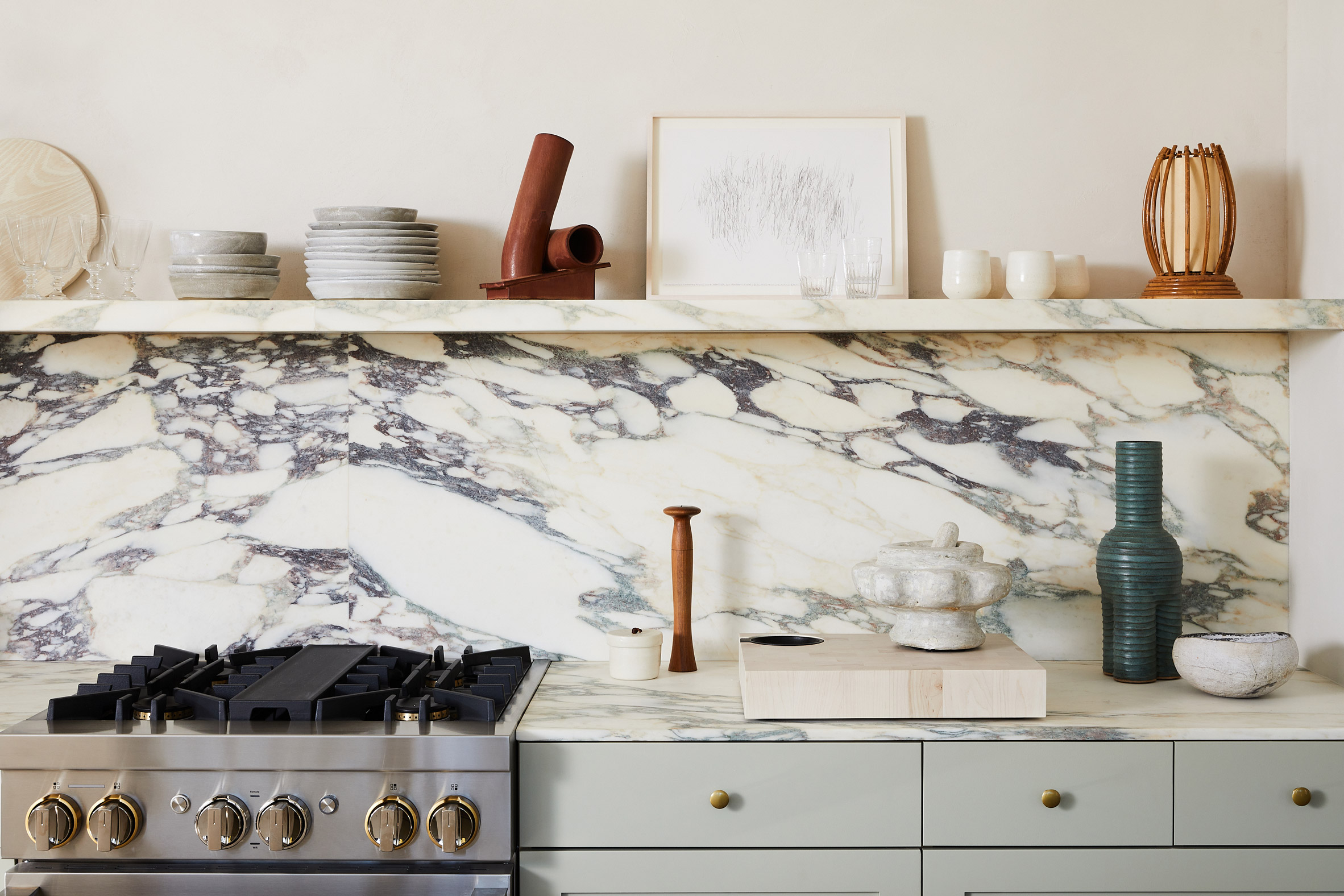 Linking the dining area to the living room is a custom-made walnut console by Green River Project, two white stools and contemporary art above by Ethan Cook. A column, bulbous pieces of French pottery and Median wall sconces by Apparatus round out the arrangement.

The living room has two cream-fabric vintage chairs of contrasting designs, a pale marble coffee table and a Pasha sofa by Caravane covered in outdoor linen fabric, which is also used on a couch in a den and the kitchen stools. 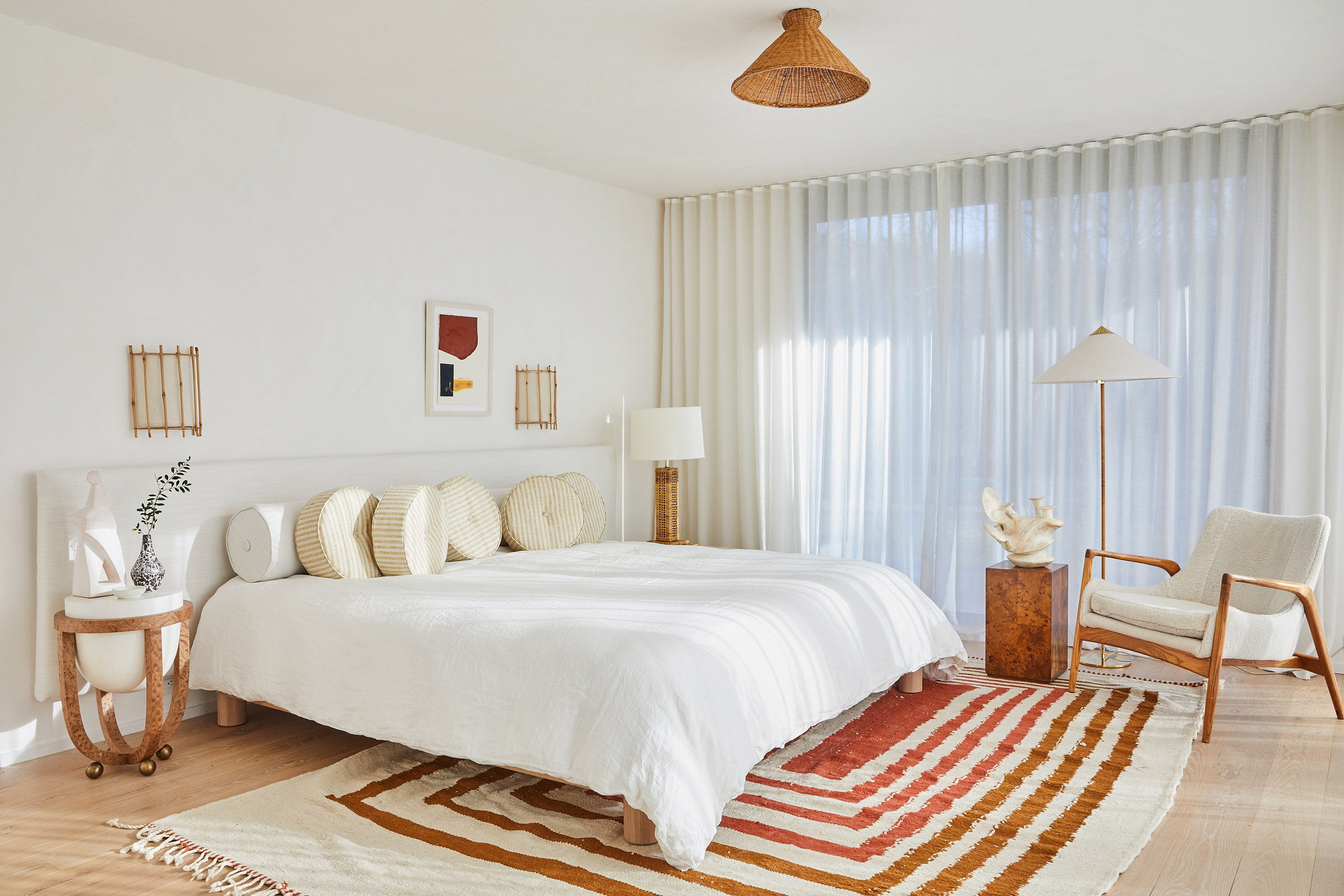 Calderone said she chose the durable fabric so her home could feel comfortable but still look fresh and clean.

Other pieces in the home are Apparatus sconces on the kitchen ceiling, an Apparatus Drum table, a rug in the den that New York designer Tali Roth did with Empire collection rugs, a 1960s French walnut table, a wooden block by Milo Baughman, and a rug from Morocco by Beni. 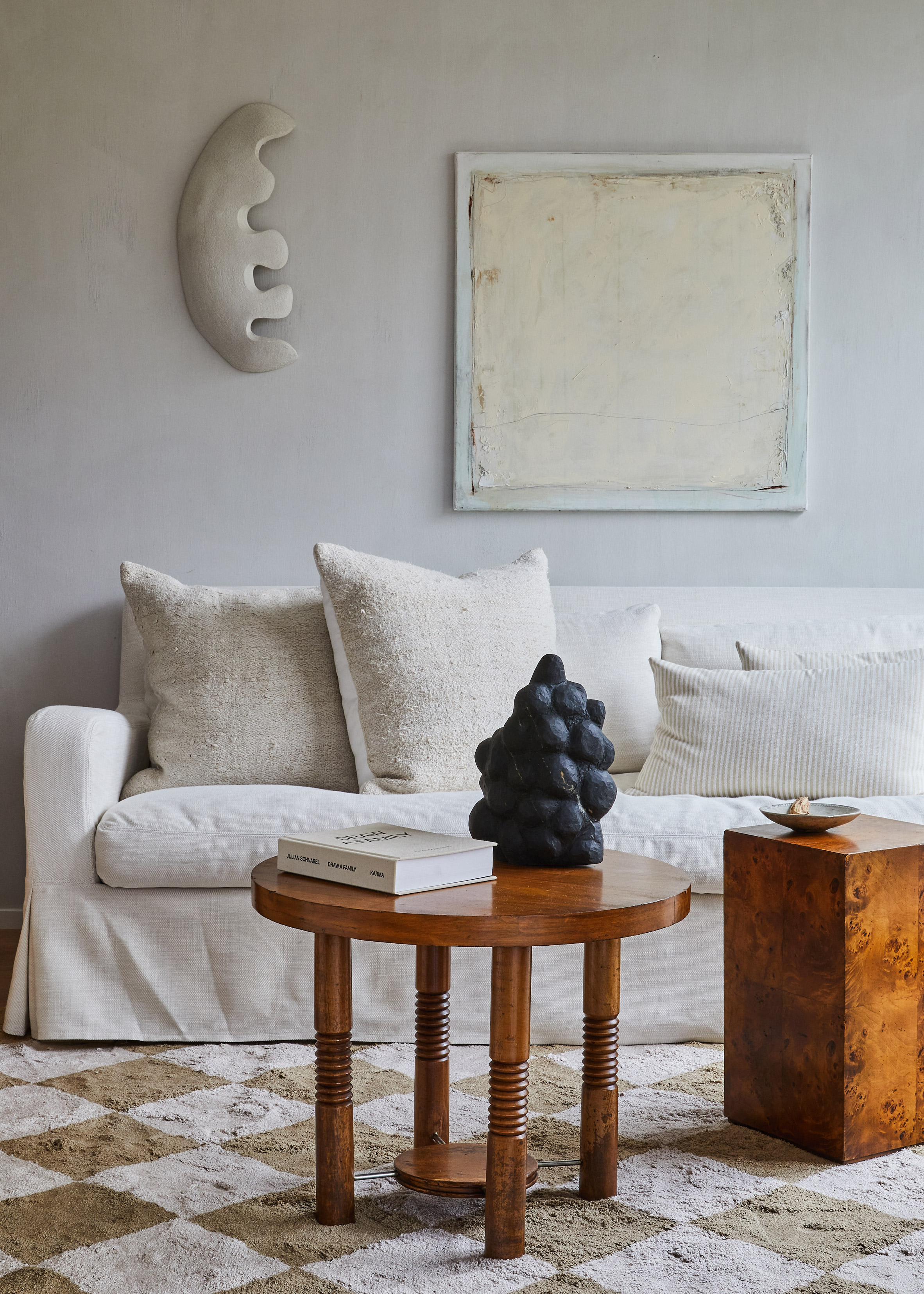 The low-slung house is single storey and contains three bedrooms, two bathrooms and a master suite. Wood floors, clerestory windows and ceilings covered in rope round out the interiors. The residence is complete with a patio, grassy lawn and outdoor swimming pool.

Amagansett is on the far tip of Long Island on the Atlantic Ocean and is home to a number of residences.

Other designers and architects based in New York that have designed their houses include Camp O by Maria Milans del Bosch, a  dark cabin by IDS/R and a concrete block house by the husband-and-wife team behind J_spy.

Photography is by Nicole Franzen.