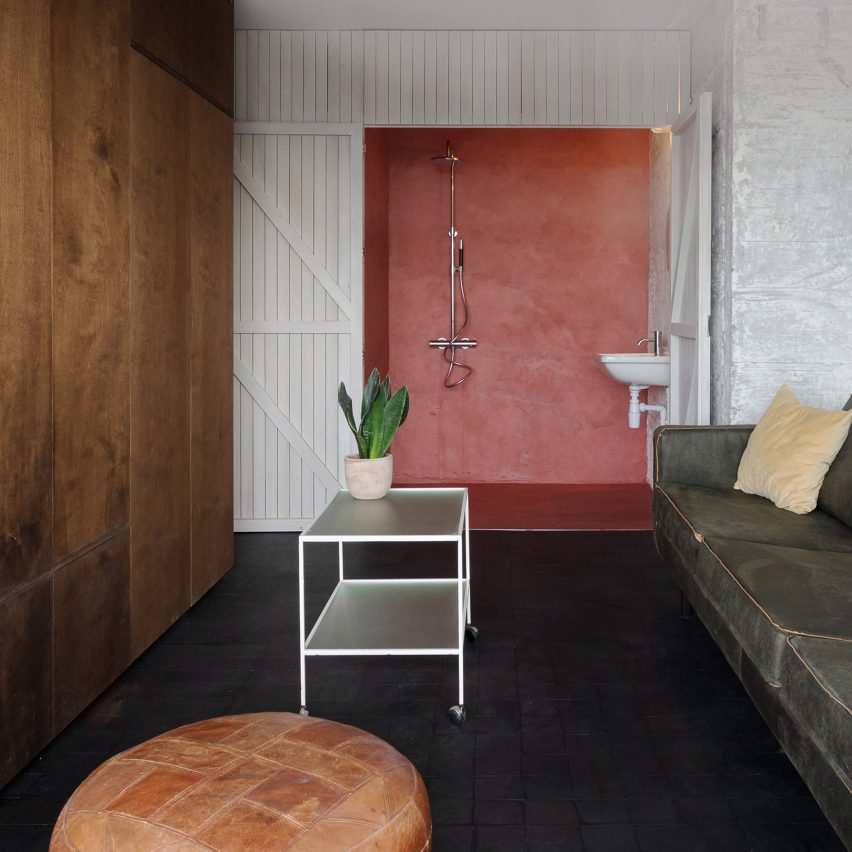 A “bed-cabinet”, kitchen island and boxed-in bathroom help organise the floor plan of the Spinmolenplein penthouse in Ghent designed by Jürgen Vandewalle.

The 60-square-metre Spinmolenplein apartment is located on the top floor of the tallest residential building in the Ghent, which rises up 25 storeys.

It was erected in the 1970s in an area that sits between the city’s medieval Flemish centre and its suburbs. 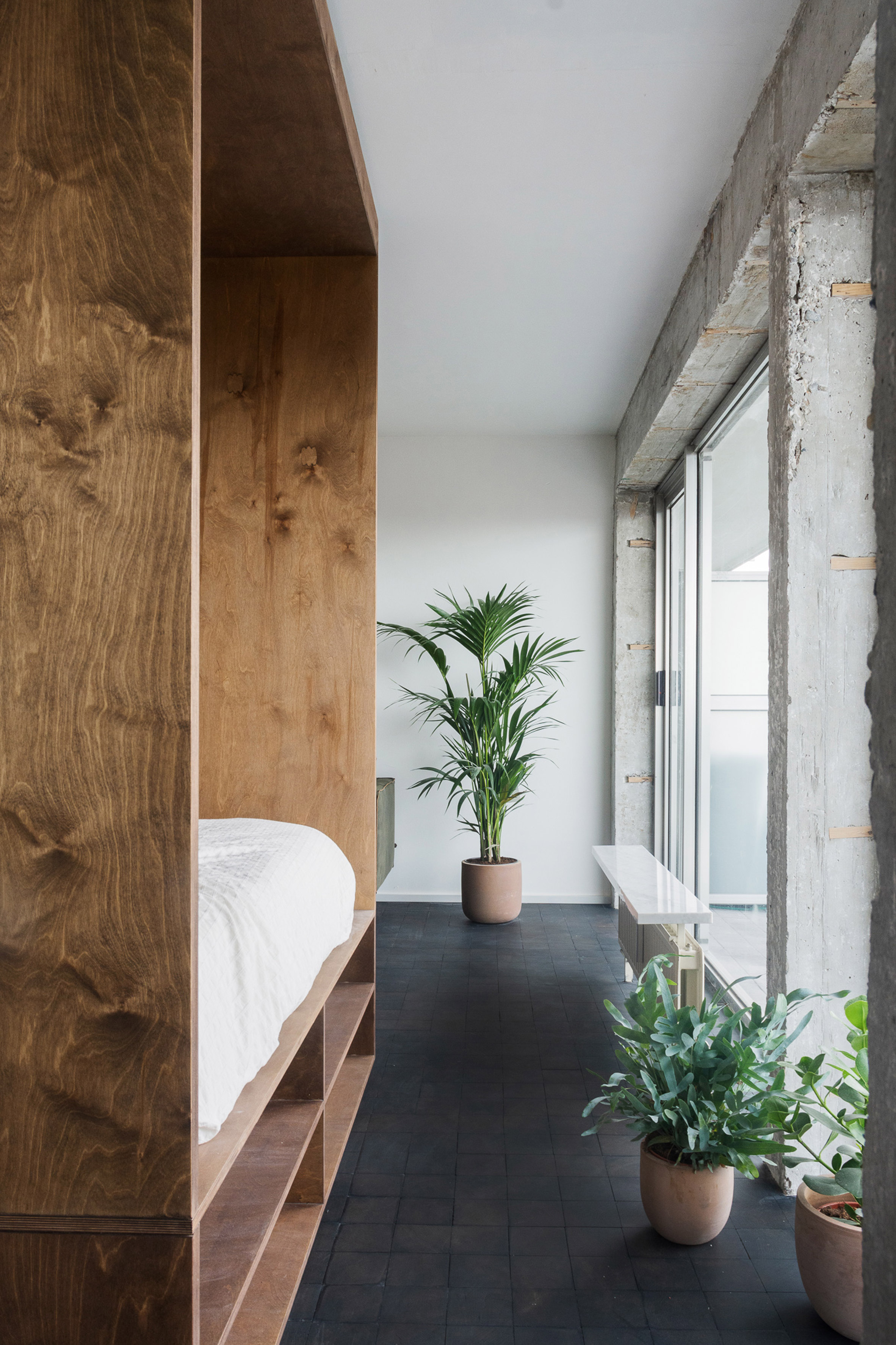 Tasked with creating a better sense of space in the one-bed apartment, local designer Jürgen Vandewalle removed all of the existing partitions,  retaining only the plastered structural walls and ceilings.

The resulting interior has an open-plan layout that revolves around three fixed elements: a kitchen island, “bed-cabinet” and an enclosed bathroom. 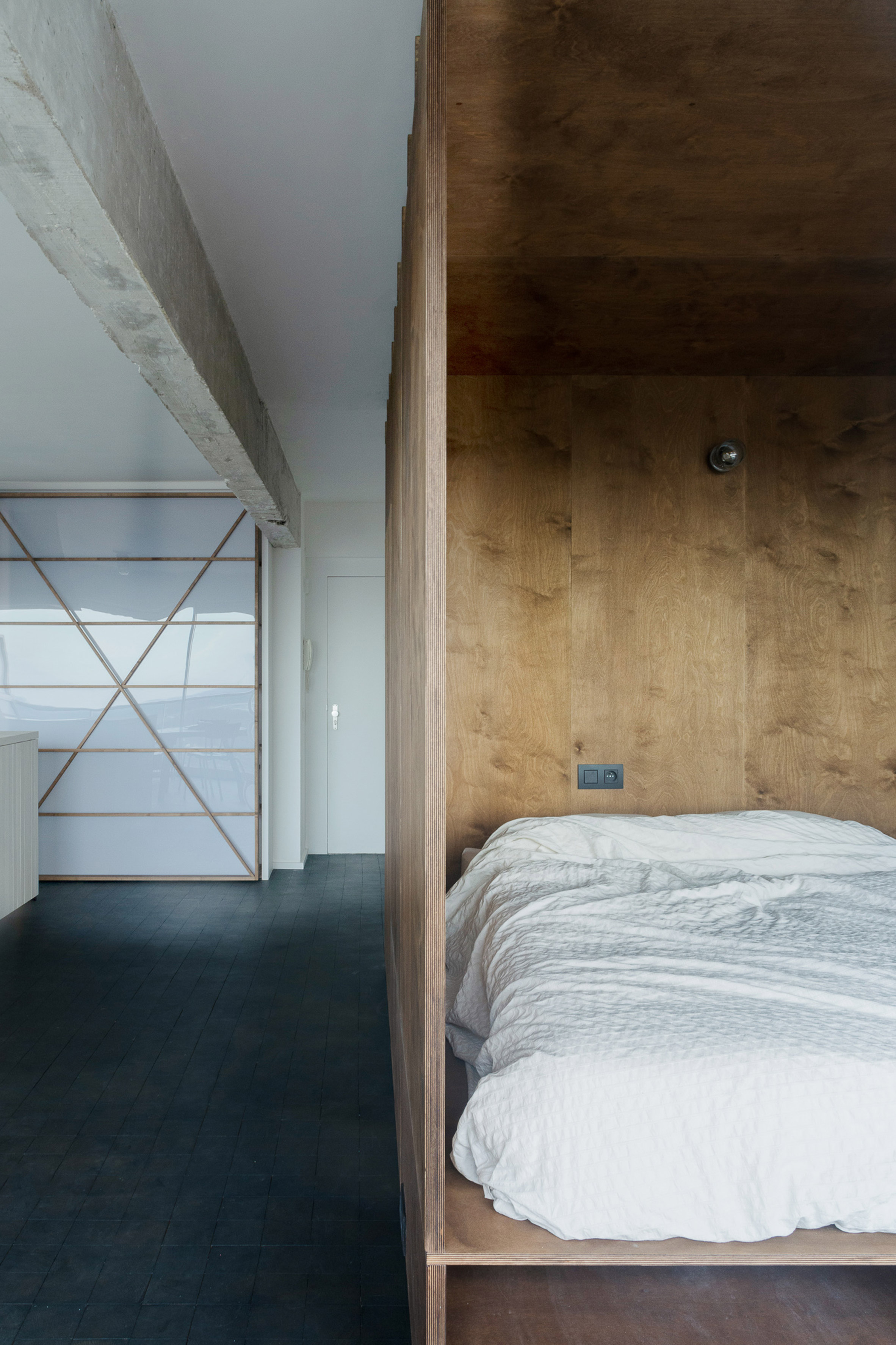 “Despite the limited surface area, the apartment still feels very spacious,” said Vandewalle, who employed what he refers to as “the principle of compact generosity” to design the space.

He describes this as “a logical and compact connection of all functions” which creates “a generous and sufficiently comfortable space on a small – but not too small – surface”. 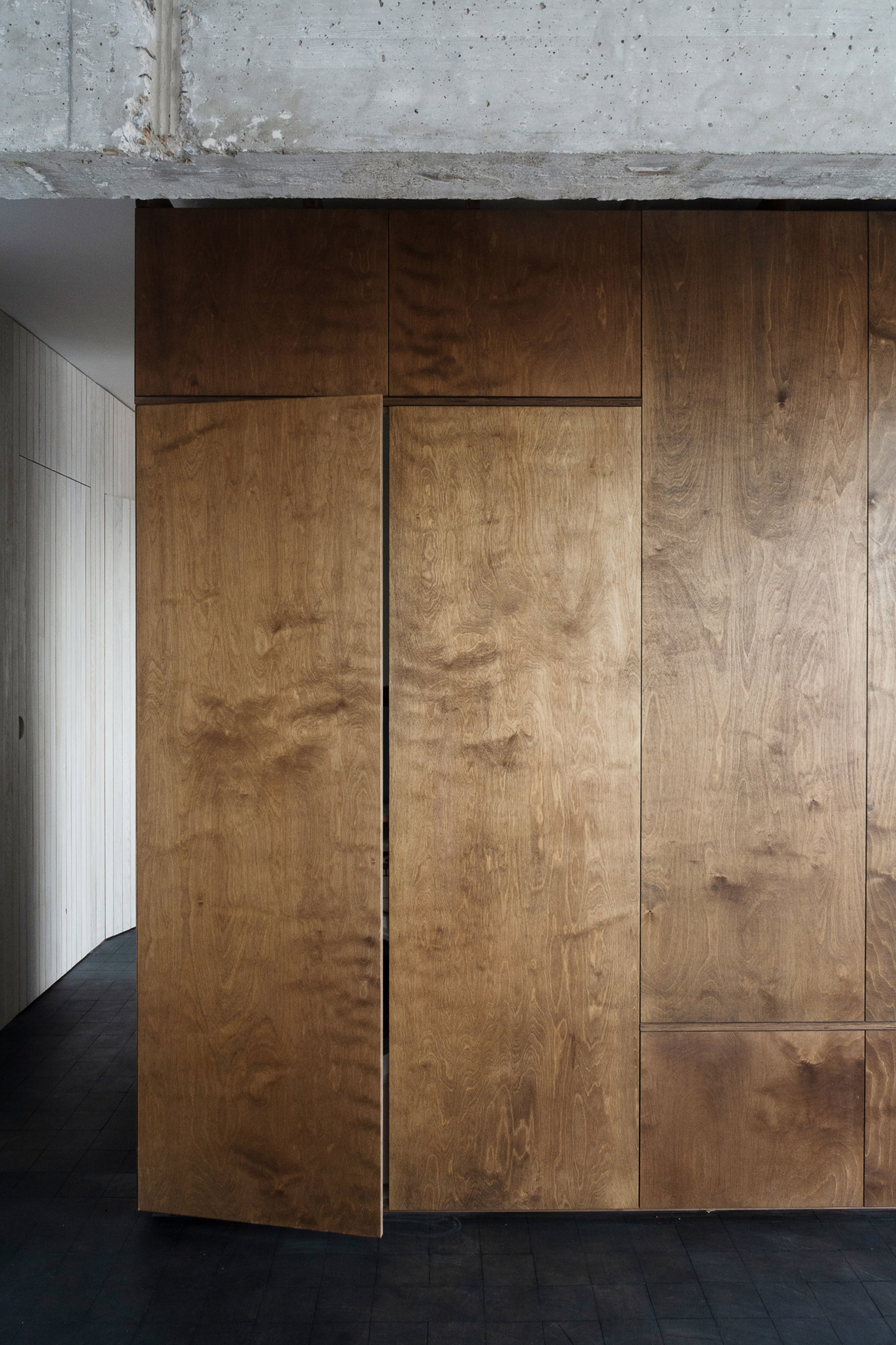 Each area of the apartment has been carefully placed to take advantage of the sweeping city views which are visible through the sliding floor-to-ceiling windows.

The “bed-cabinet” sits at the centre of the floor plan, dividing the apartment in half: on one side lies the kitchen and dining space, while on the other is the living room and bathroom. 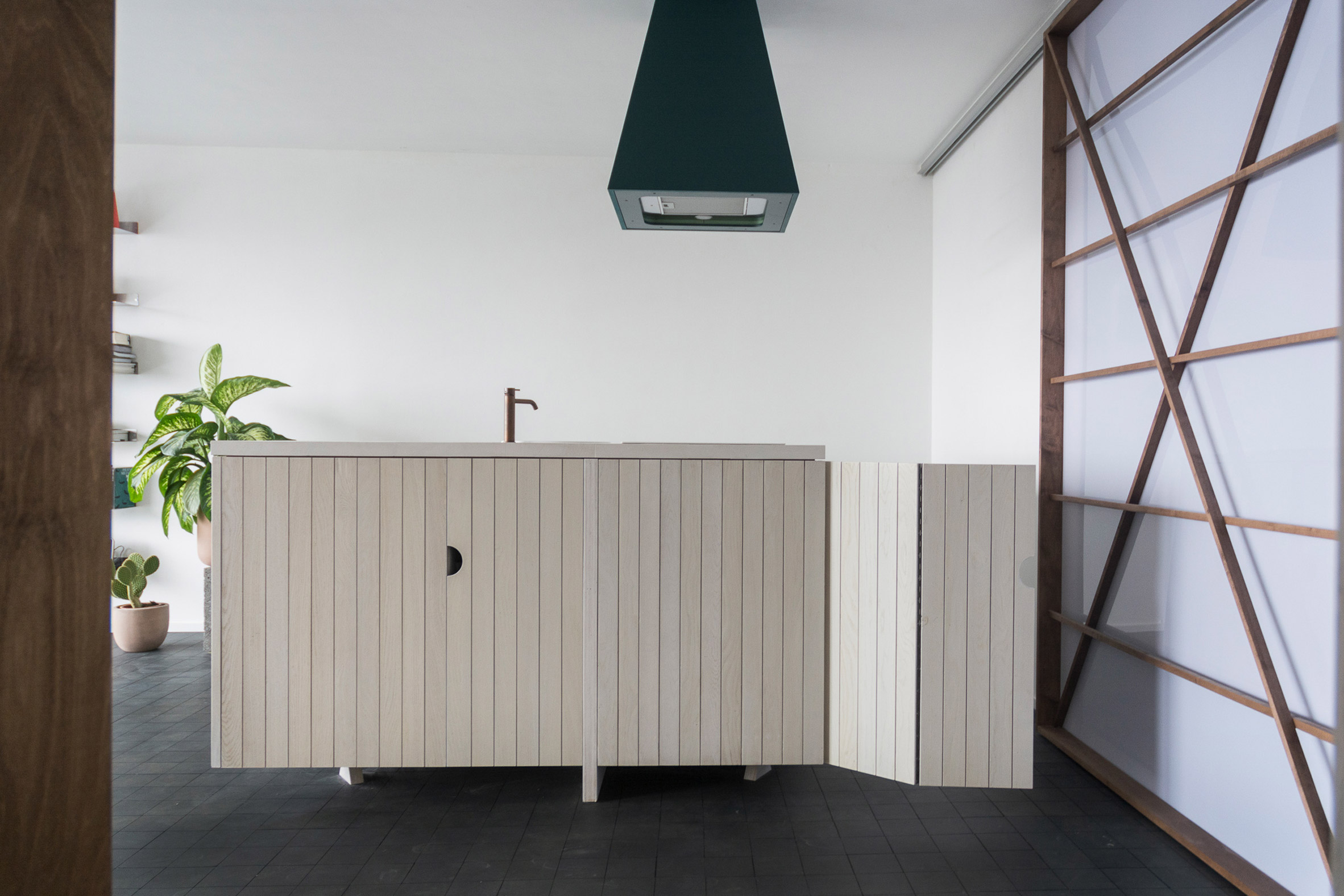 Open to the apartment’s generous aluminium-framed windows but enclosed on all other sides, the bed unit was made by furniture maker Atelier Pi from panels of plywood that are brushed and then pickled.

Around the bed is a series of built-in storage cupboards, while underneath are a couple of open drawers. 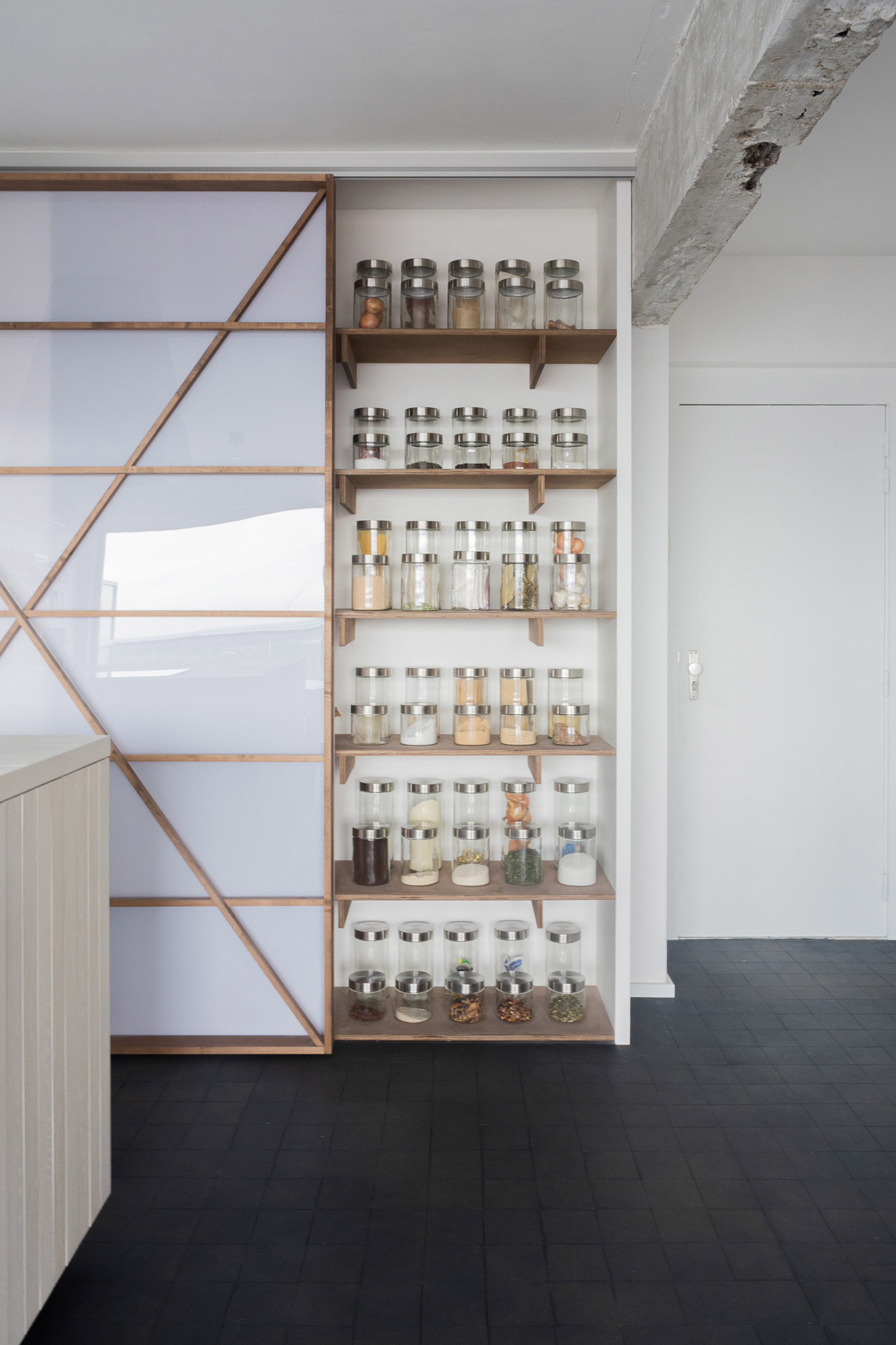 “The choice to integrate the bed into a piece of furniture was important to achieve the openness of the apartment,” explained Vandewalle.

“The tension between the enclosed wooden alcove and the view over the city is special.” 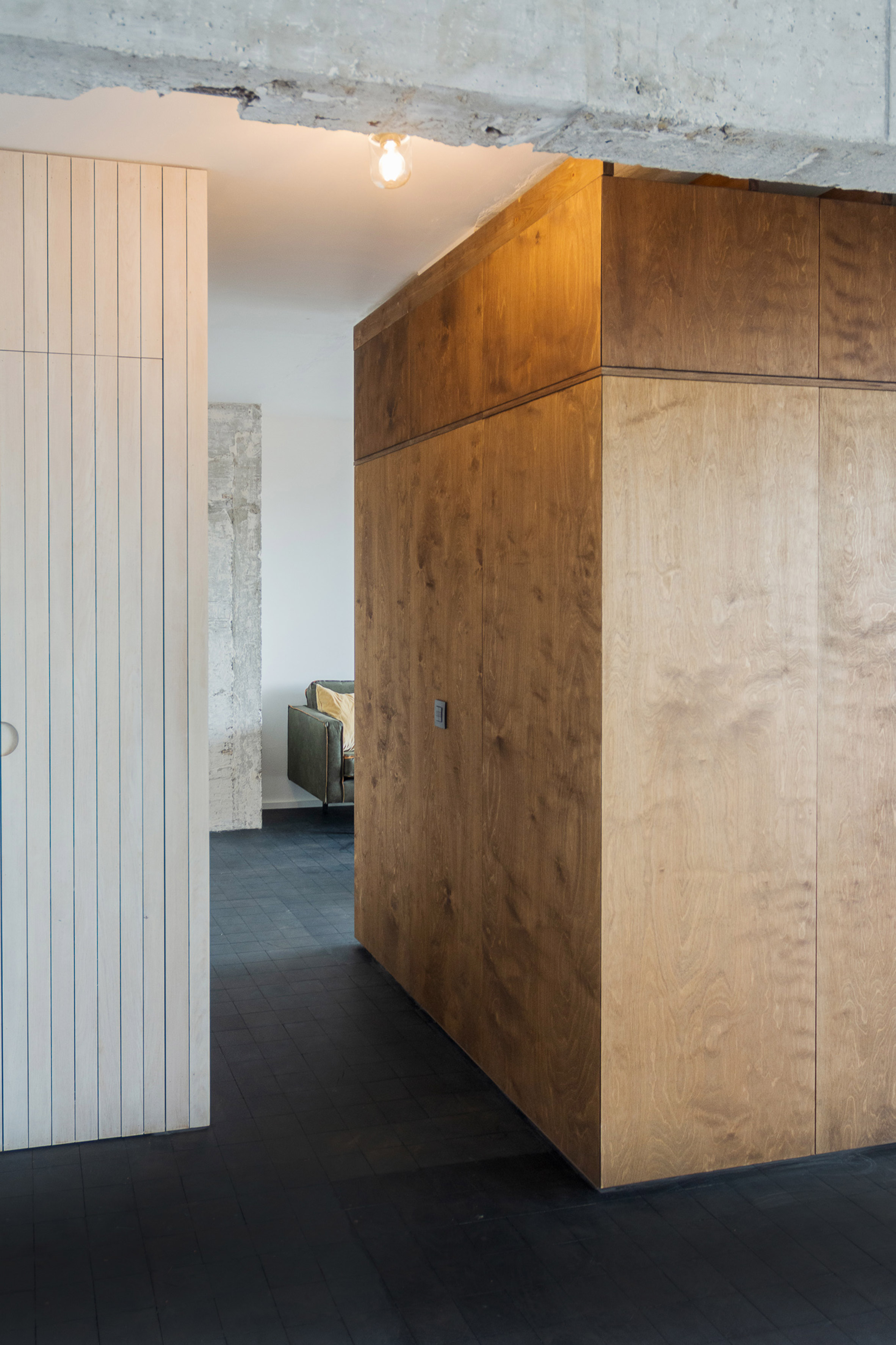 The adjacent kitchen is anchored by a blocky breakfast island crafted from white-lacquered timber – Vandewalle likens its form to an altar in a church. A blue-green extractor hood has been suspended directly above.

A large cabinet with a translucent door runs across the back wall. It’s timber frame, which is made from the same plywood as the bed unit, is loosely informed by the supporting framework of an artist’s canvas. 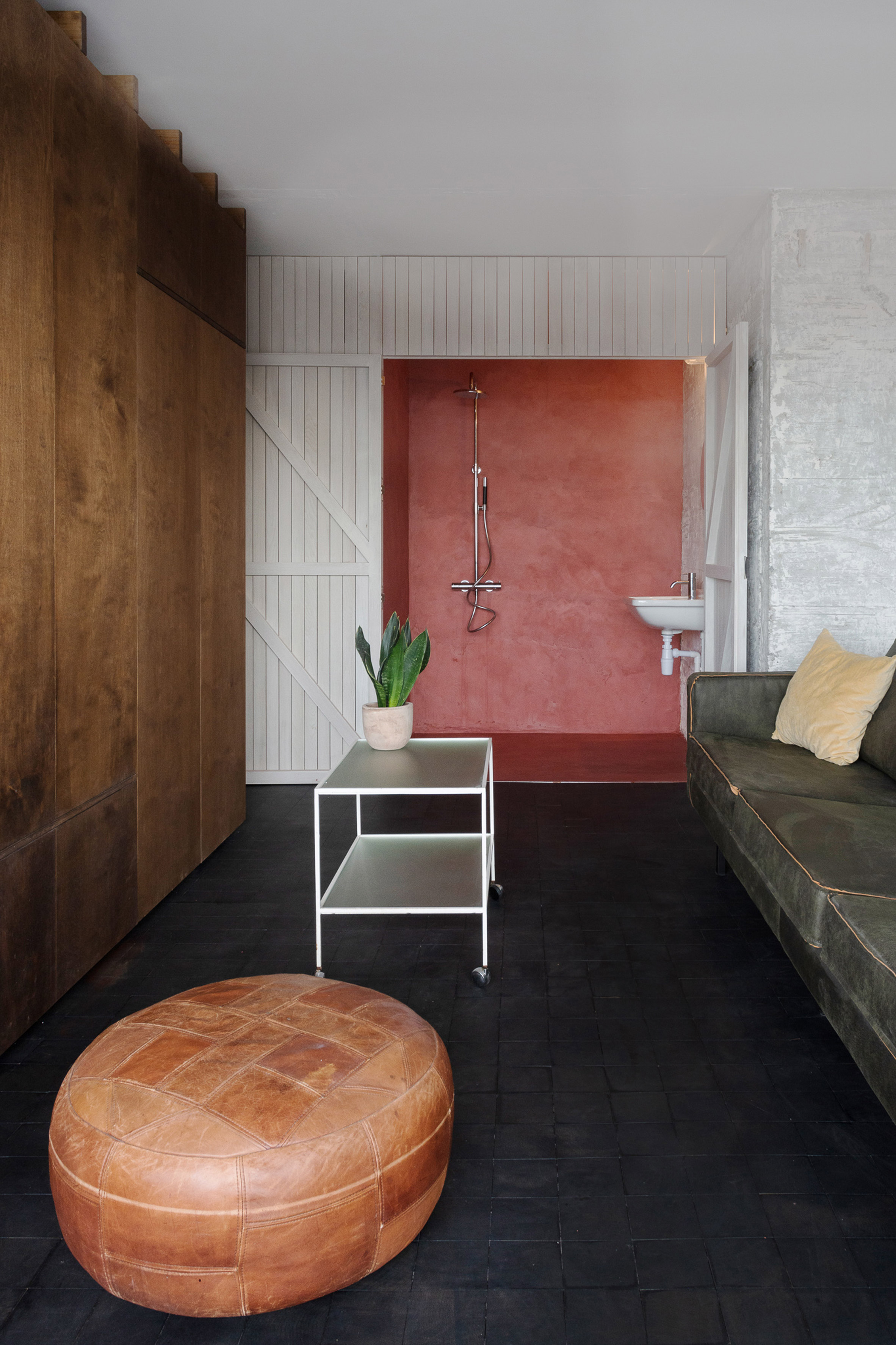 Positioned at the back of the apartment just off the living room is the volume that encloses the bathroom. Its made from the same white-lacquered wood as the kitchen island and is accessed via a set of barn-style doors.

Inside, the shower cubicle and toilet are finished with an earthy, pink-tone micro cement that contrasts with the white wood. 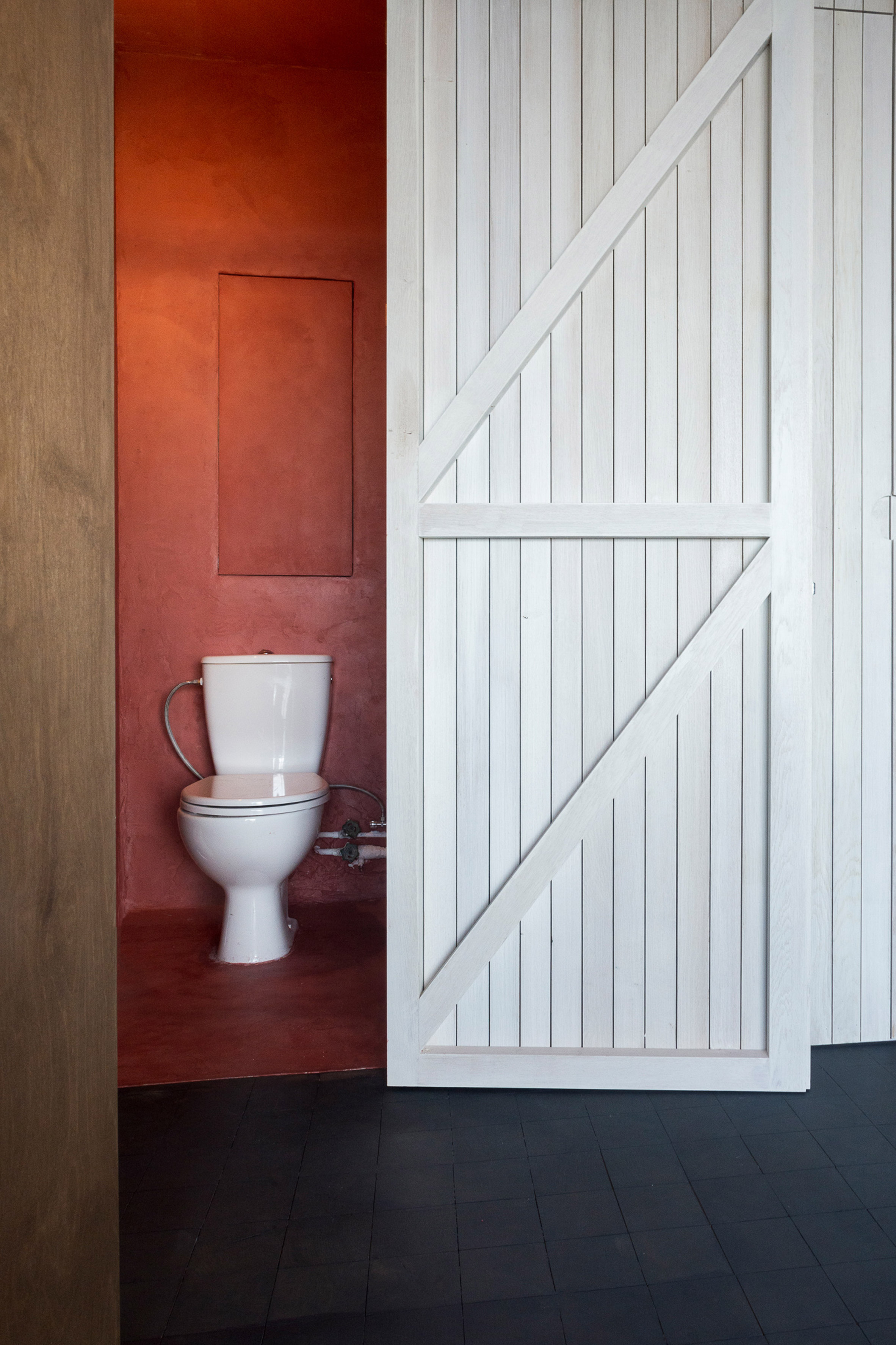 A green-leather sofa and a coffee table have been placed near the windows to form a sitting area. There is also a concrete dining table beside the kitchen.

“The apartment is an open flowchart where you can move freely, but is not necessarily flexible in itself,” reflected Vandewalle.

“The elements each have their own chosen place in relation to each other. For example, the massive concrete table was poured on the spot in the apartment and because of its weight and size it found a definitive place here.” 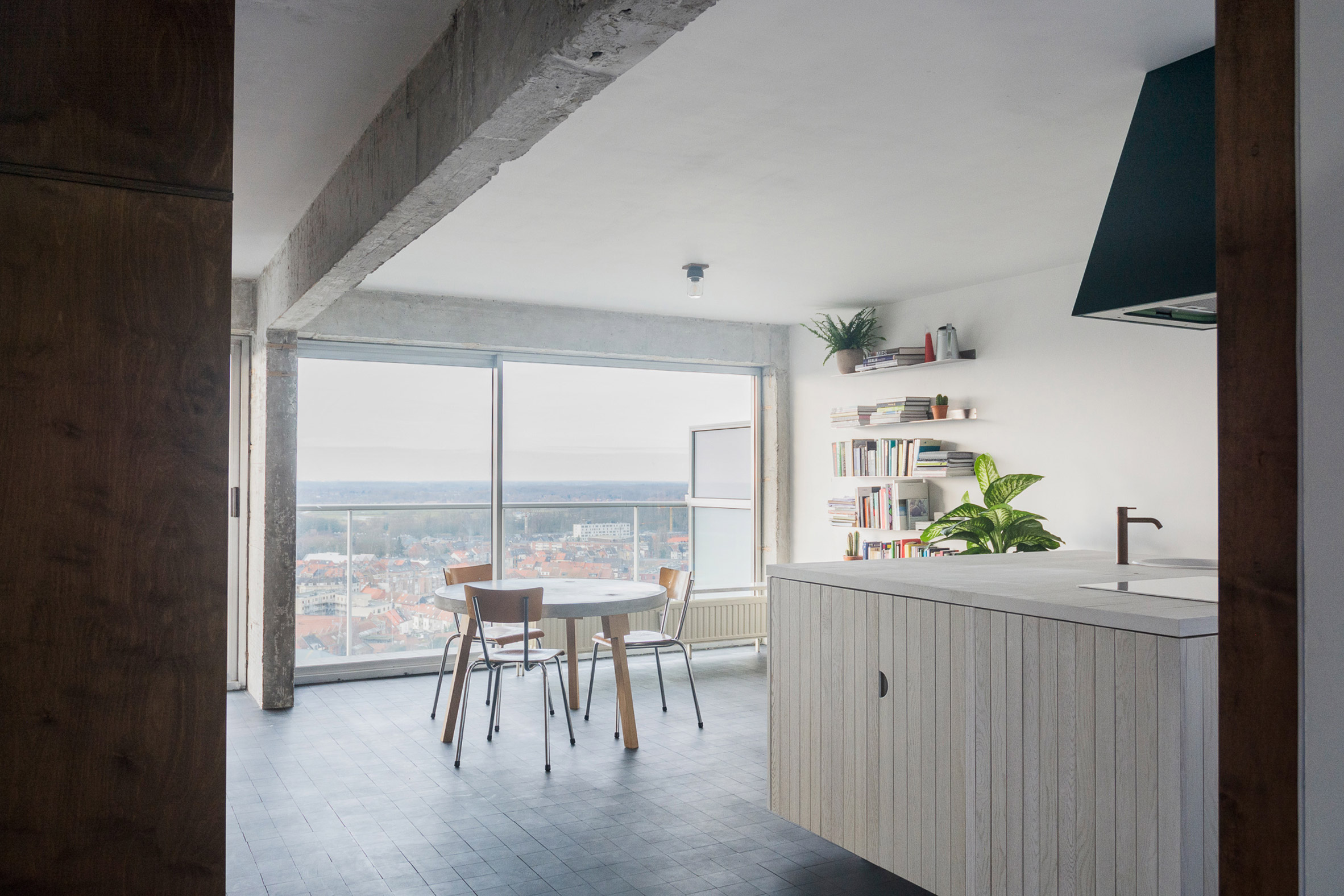 End-grain timber blocks stained petroleum-black have been laid out in a rhythmic grid across the floor of the entire apartment, creating a feeling of continuity between different rooms.

The blocks, which have each been made to measure 12 by 12 cm, were cut from a pile of heavy oak beams that had been drying at a timber dealer for 10 years. 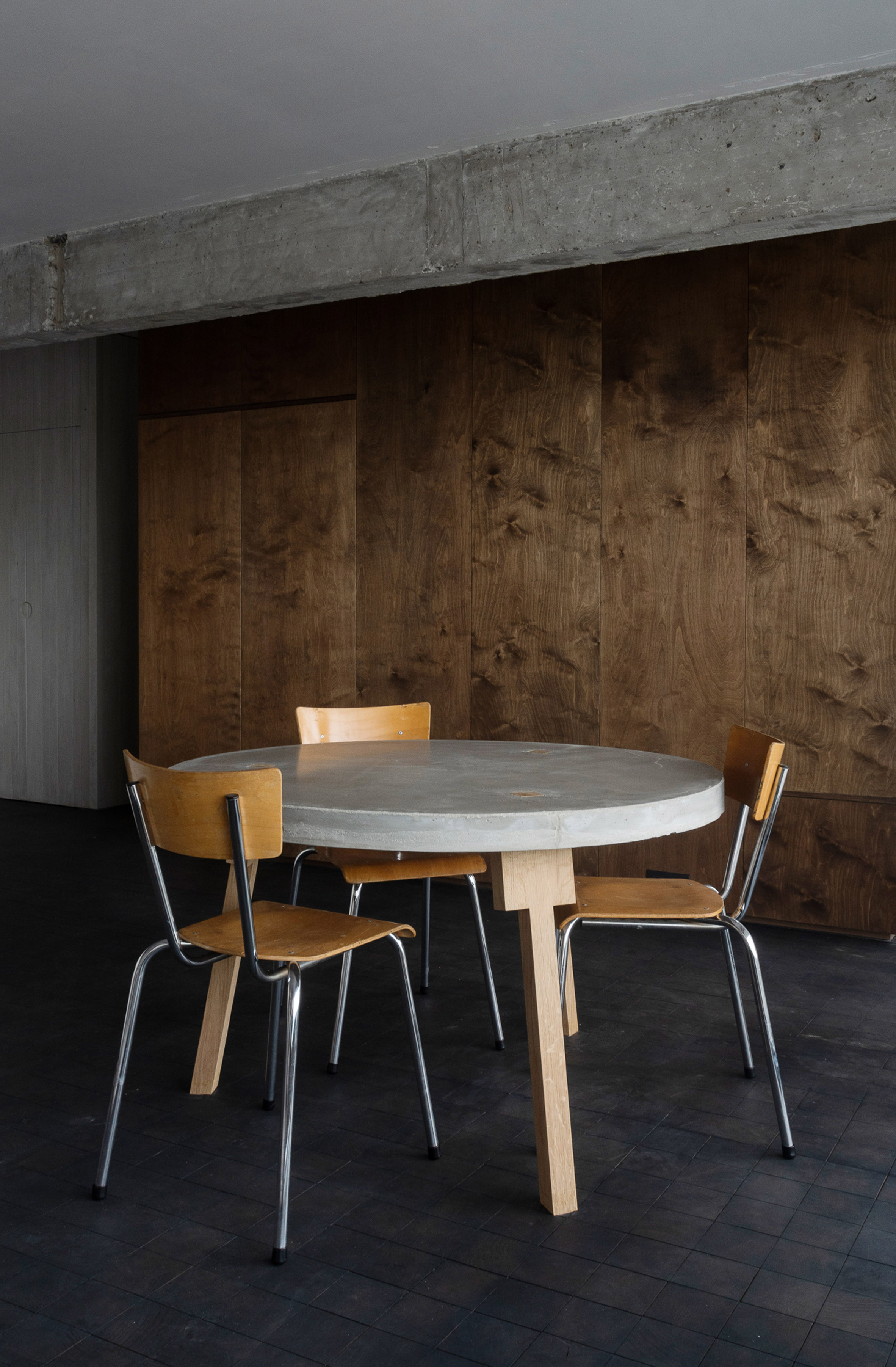 “The dark oil makes the various pieces into one, without losing the wood texture,” explained Vandewalle, “the joints were also not filled in to make the grid of the floor readable and to achieve a specific brutality.”

“The sunlight plays with the intense petroleum colour, sometimes has a light and then a dark appearance – different at every moment of the day.” 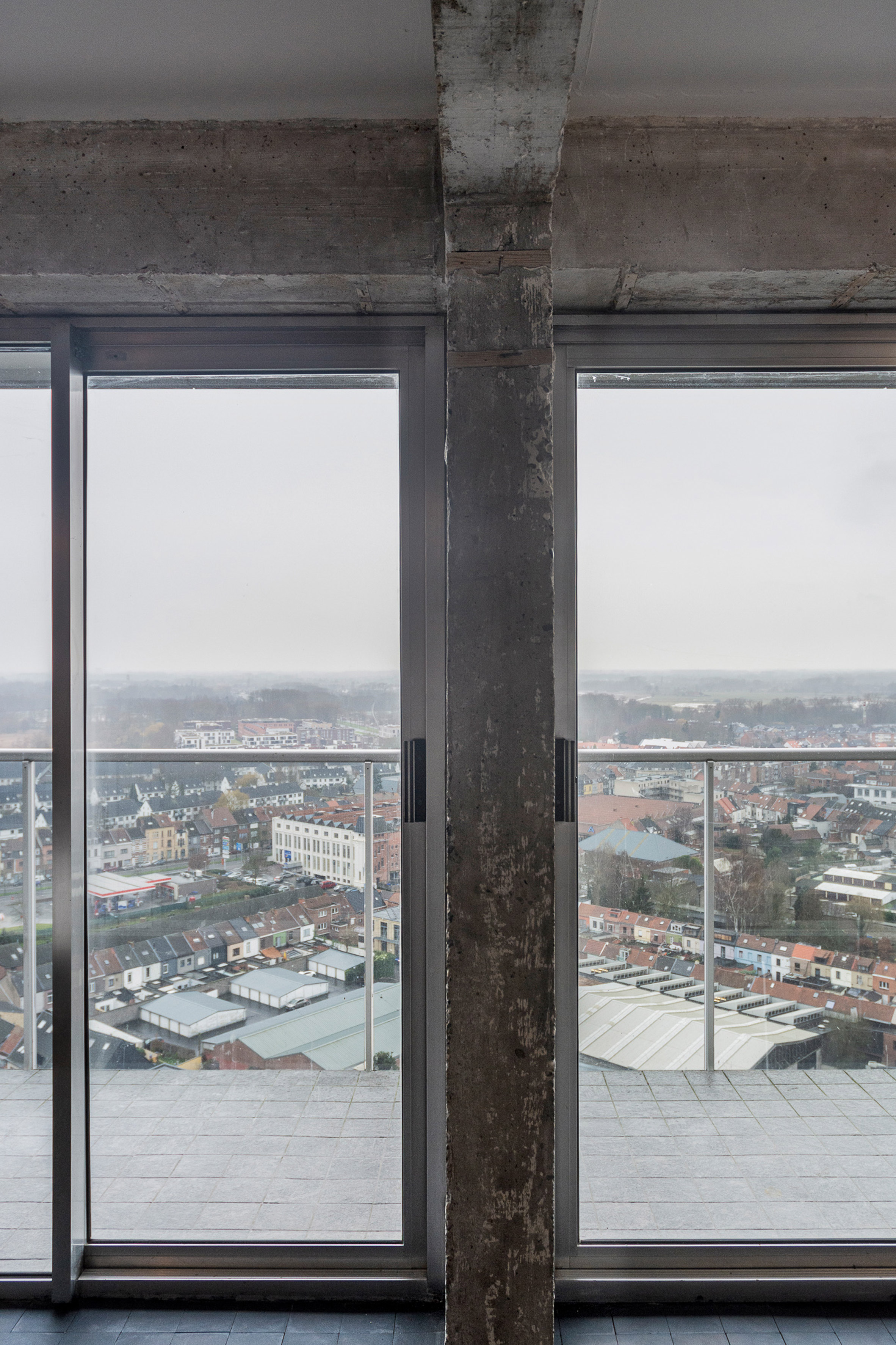 Much like Jürgen Vandewalle, Belgian architecture studio arranged a small house in Ghent around a wedge-shaped storage volume. Inside it contained the kitchen, laundry facilities and extra storage space.