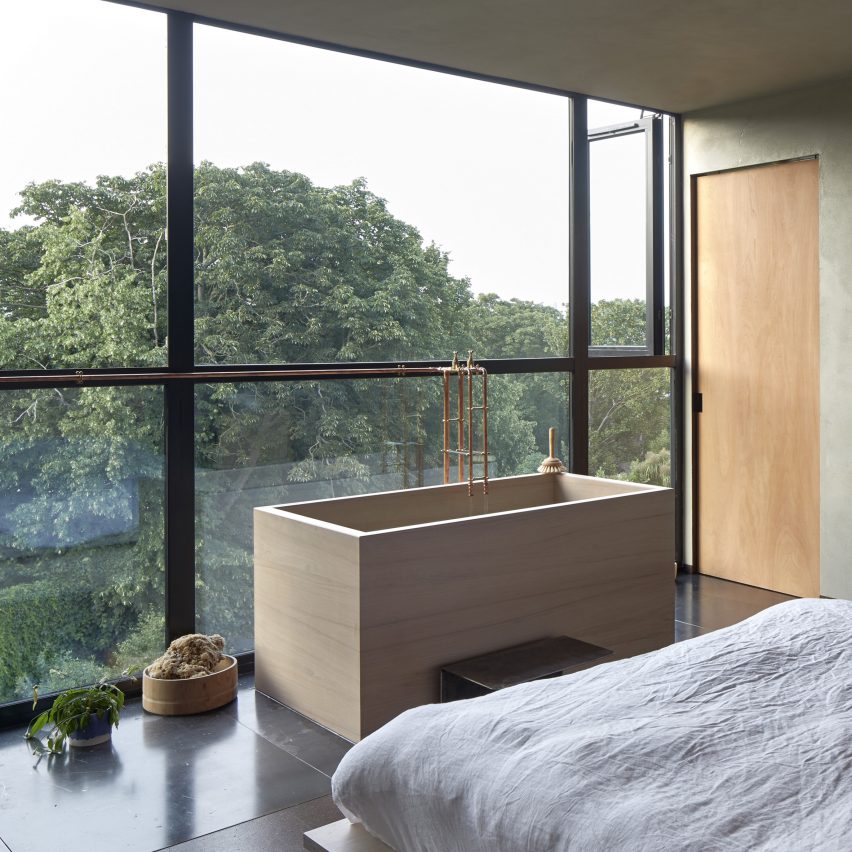 Designed to be a peaceful retreat, the loft extension contains the Sumners’ master bedroom and features a wooden bath positioned against a large window with views across London.

“Leaf House was commissioned by Edmund and Yuki as a sanctuary for them to retreat to on the upper levels of their house in south-east London,” Simon Astridge, co-founder of Szczepaniak Astridge, told Dezeen. 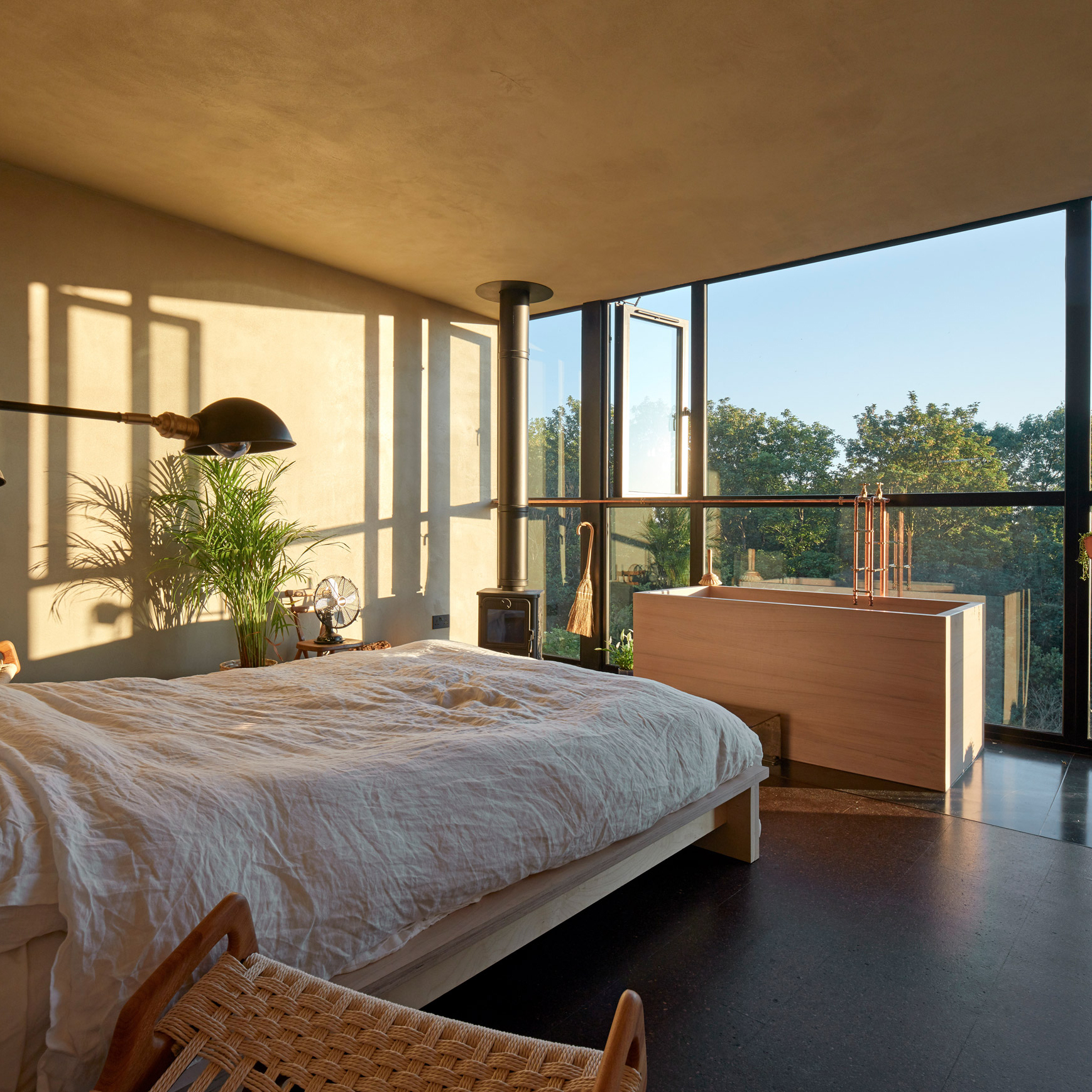 The Sumners wanted to create a simple bedroom that was different from the many loft extensions they had seen in London and did not try to squeeze a lot into the space.

“It’s not designed to make sense or be totally practical aesthetically or space-wise,” explained Edmund Sumner.

“I’ve shot countless attic extensions and they can be white boxes that are all too often taken up by storage space and very hot in summer, too cold in the winter. We wanted something simple, open and calm,” he continued.

“I liked the idea of a bath with a view – something very familiar from my visits to Japan.” 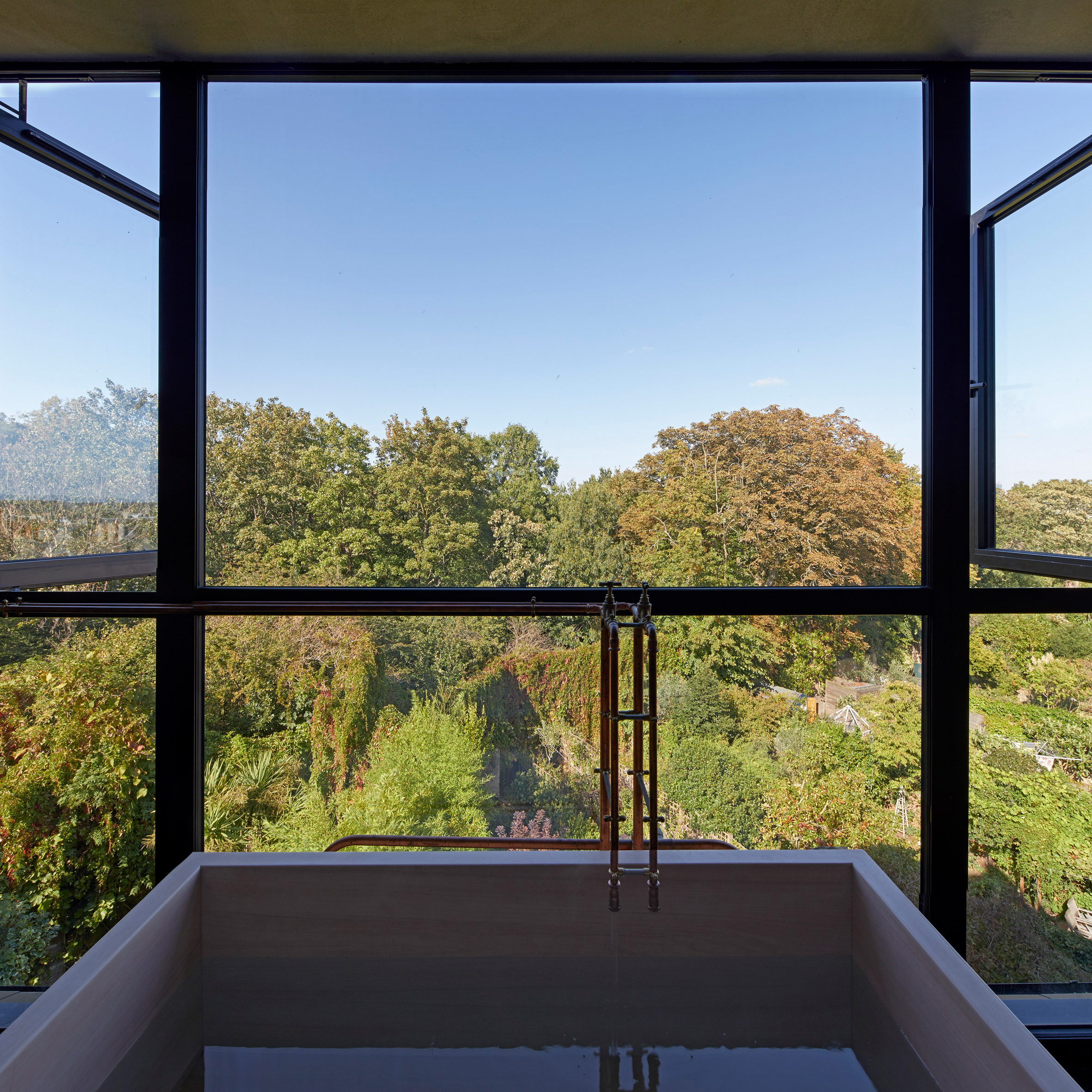 Designed to take advantage of the views across the greenery of Lettsom Gardens, the space is completely open with the stairs arriving directly in the bedroom and no walls dividing the bath from the sleeping space.

The bed’s tall headboard sections off part of the room, which has been left as open space. 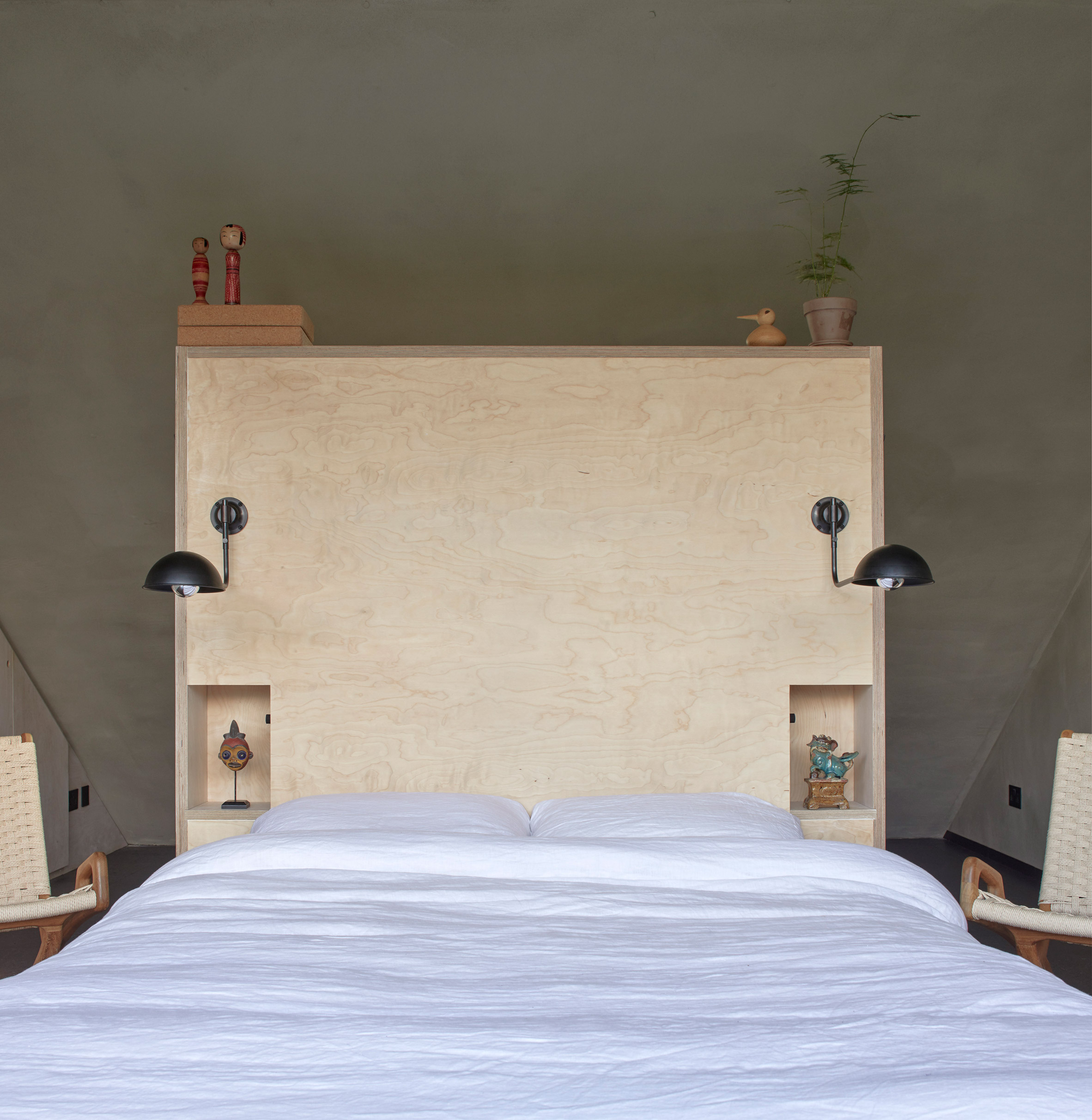 “It’s unique in many ways as it incorporates a lot of Japanese elements and its very tactile, but for me what is most unique about it is that we left empty space up in the attic,” said Edmund Sumner.

“We left it open rather than divide it up into little compartments, which most standardised attic conversions would resort to.”

“This was thanks to the architect Simon, who understood the importance of ‘ma’ –  the Japanese concept of space, the in-between space of nothing,” he added. 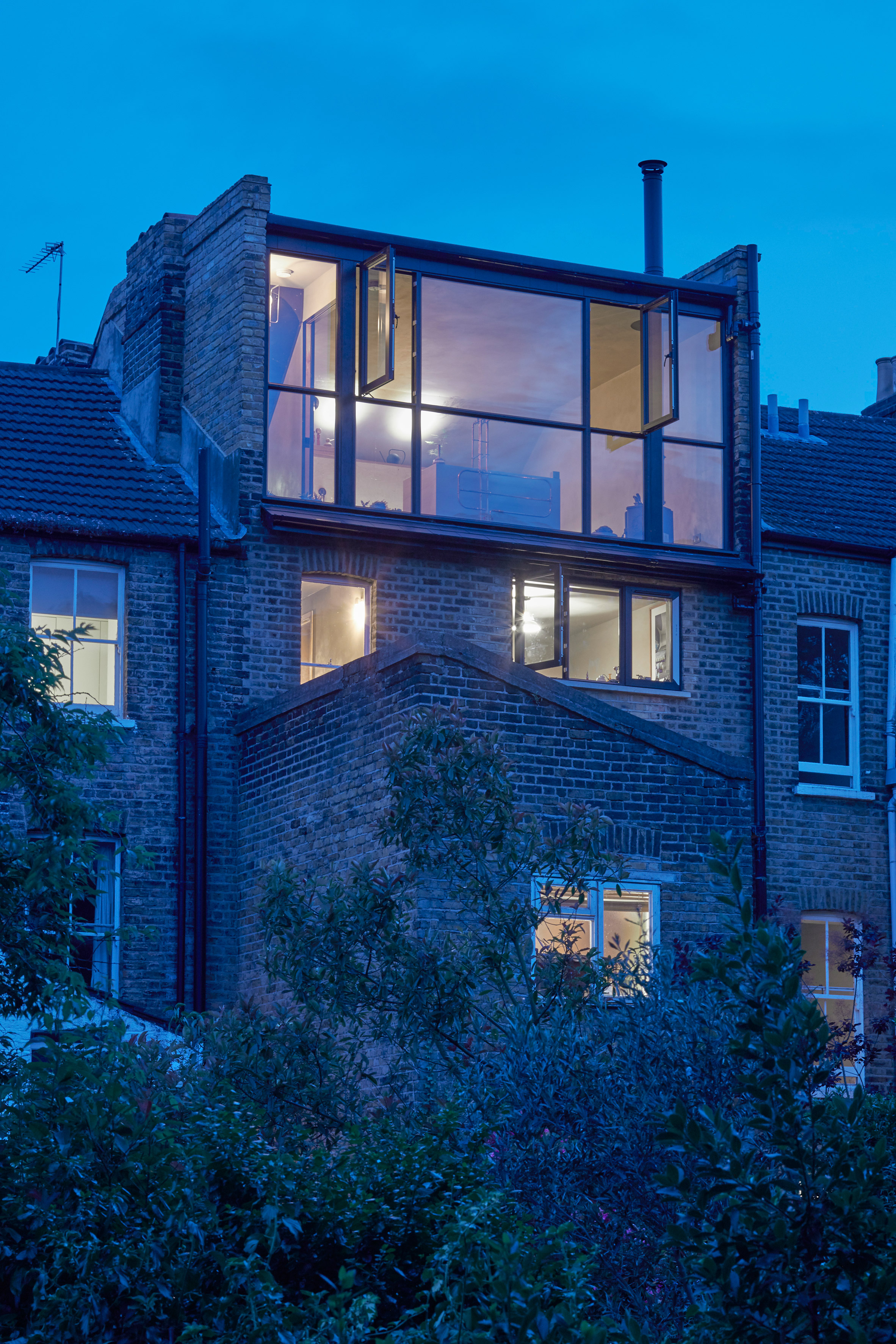 Japanese interior design, as well as sustainability, was also important for the choice of materials used in the loft, which has clay covering its roof and walls.

“We tried to be as sustainable as possible, using natural materials like ‘tsuchikabe’ or clay wall, timber for structure and having good insulation, and incorporating Japanese influences, like the idea of going through the darkness to light – hence the tunnel – and the bath that is made out of waxed teak,” said Yuki Sumner. 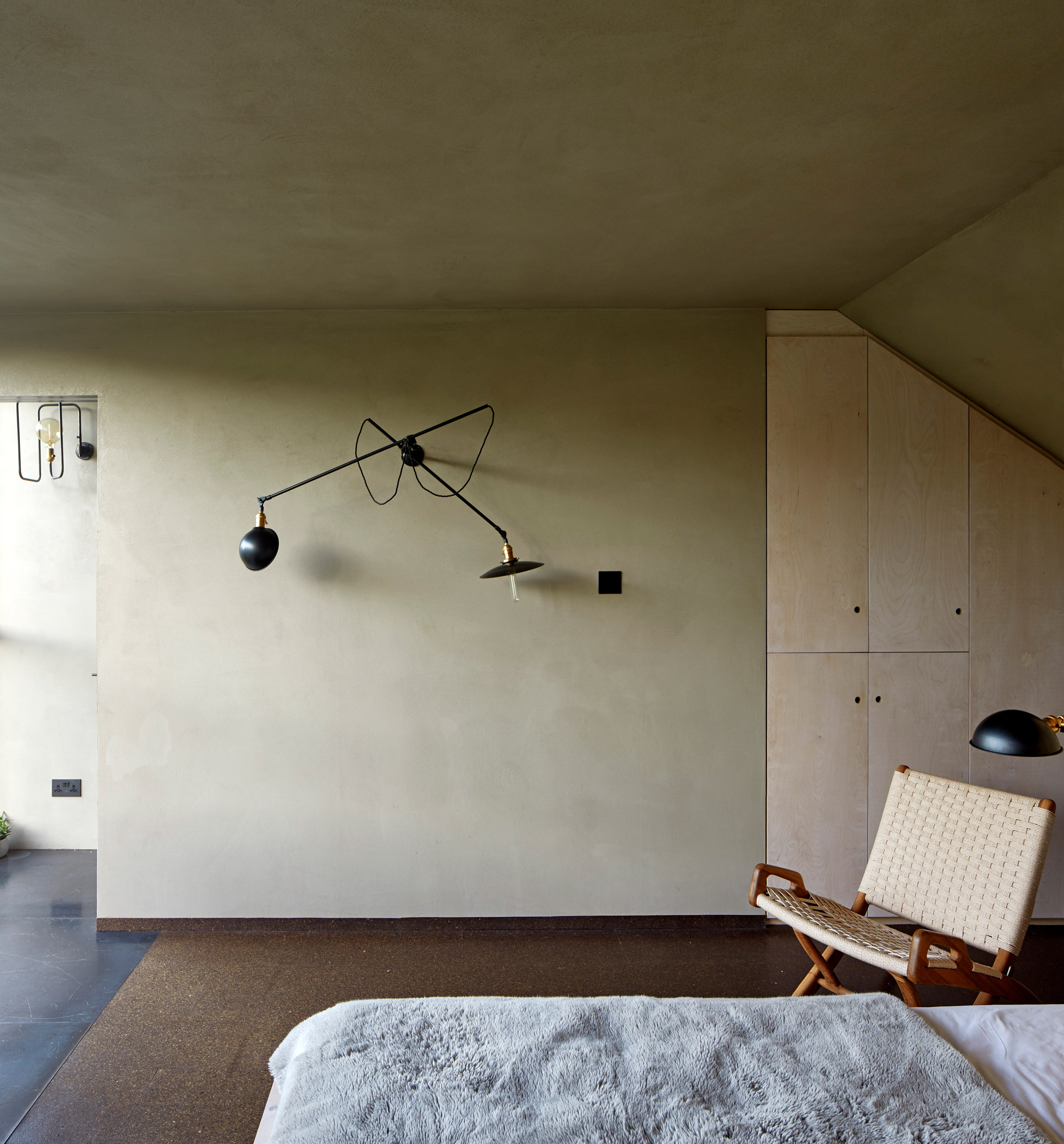 The loft conversion formed part of an overhaul of the terrace’s upper storeys to create additional bedrooms for the Sumner’s children and in turn free up space for the pair to work from home.

“The main focus was to provide our children their own rooms,” explained Yuki Sumner. “Creating an attic freed up the floor below to create two equal-sized rooms and an ensuite shower room,” she told Dezeen.

“We now have a five-bedroom house, which seems very big but as both Edmund and I work from home, the fact that we now have a room each to work in also makes a huge difference in terms of productivity and output.” 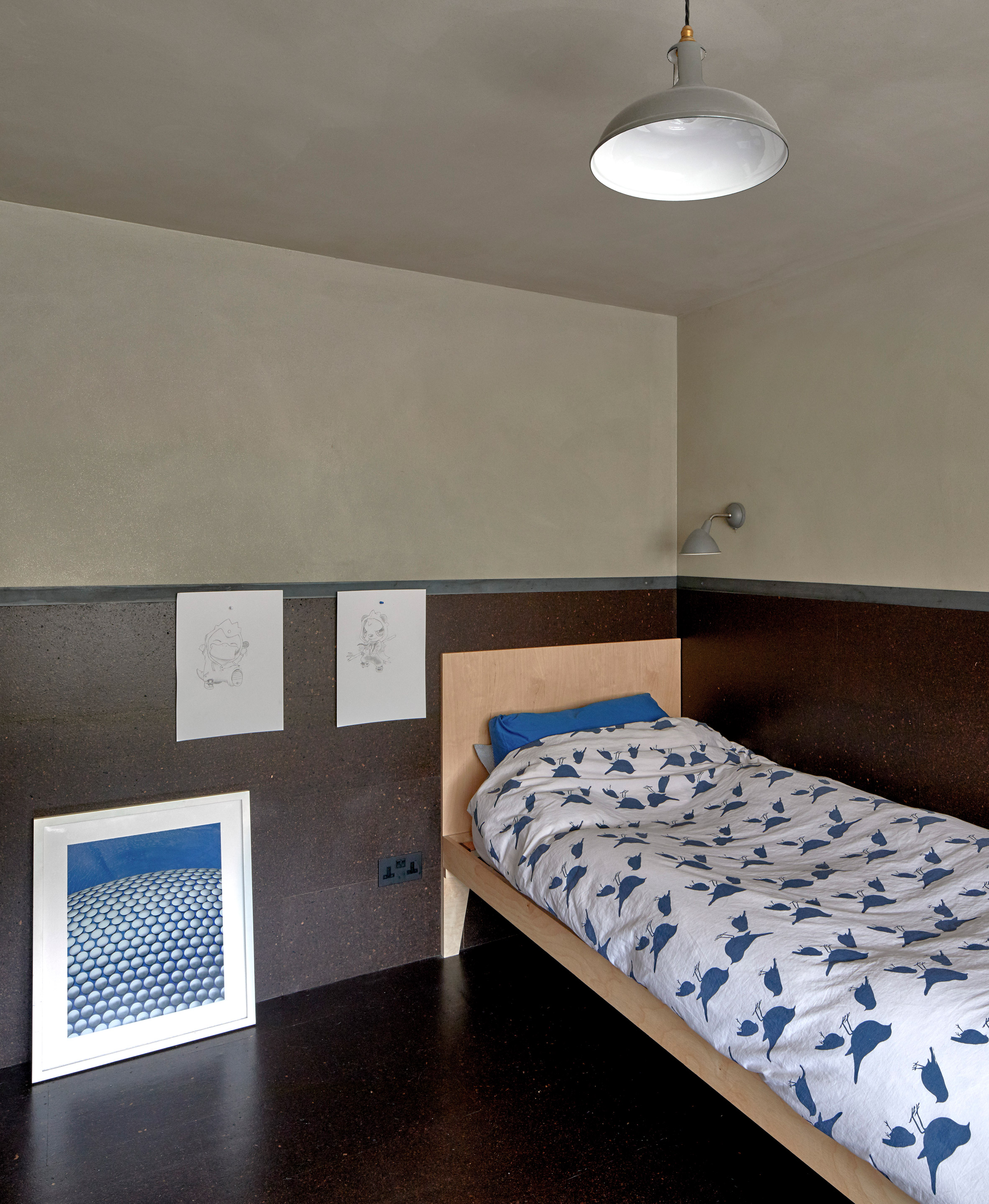 The pair of children’s bedroom have been finished with a similar material palette to the master bedroom in the loft. The walls are half clay, which extends to the ceiling, and half cork, which continues to cover the floor. The cork allows the children to use the walls as a pinboard.

All of the rooms are completed with birch plywood furniture. 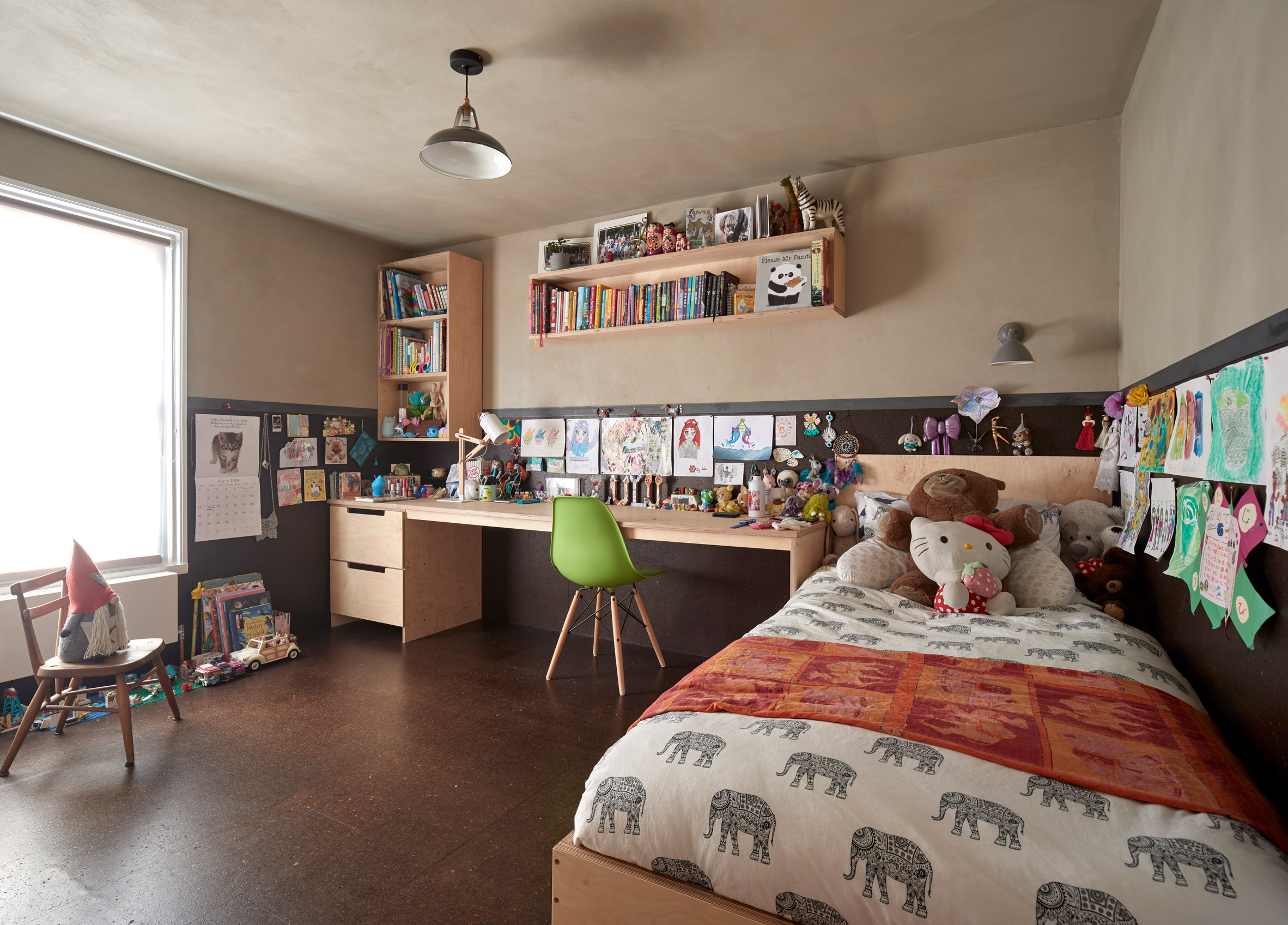 Both Edmund and Yuki Sumner have worked covering architecture for many years, but believe that creating their own project has given them a huge insight into the profession.

“I’ve worked in the industry for over 20 years now but I’ve learned a whole a lot more about the industry and how it works in just 20 weeks,” said Edmund Sumner.

“It was fascinating being on the other side of the table, getting into the head of a typical client that I might deal with. I could probably write a whole book on this.”

Among the buildings that architectural photographer Edmund Sumner has recently captured are a brutalist concrete architecture school in India, a charred-wood house in Mexico and a pink cemetery in Japan designed by David Chipperfield. He will also be collaborating with Dezeen as part of Virtual Design Festival.

Photography is by Edmund Sumner.