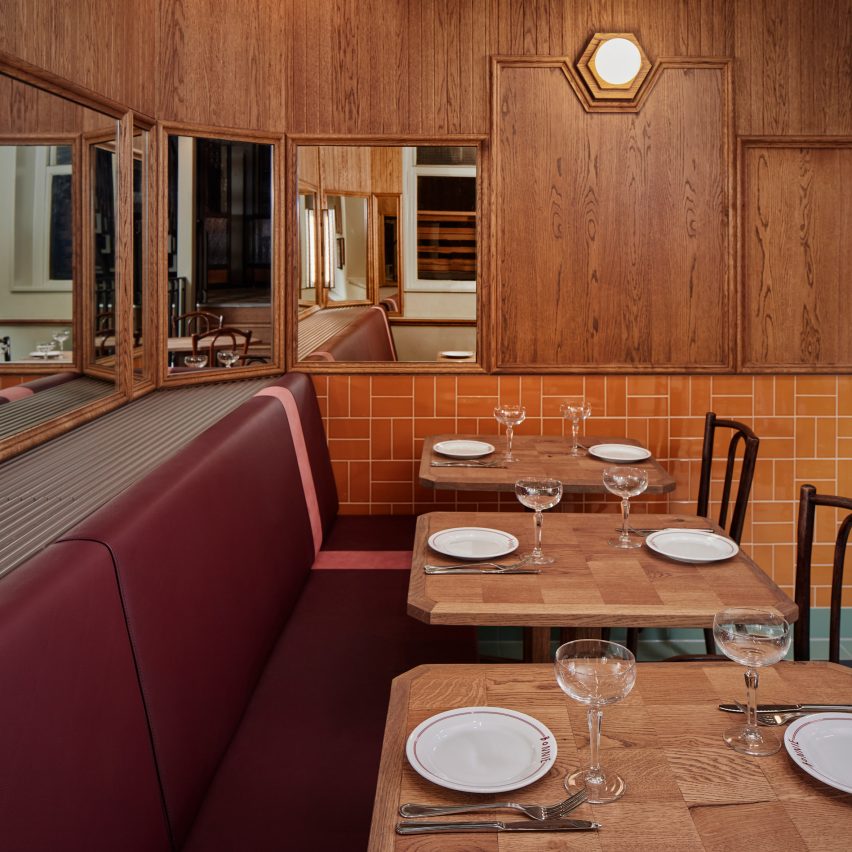 The restaurant, Bonnie, has been a landmark of Amsterdam’s Amstelveenseweg neighbourhood for the past 119 years – under the old name of Cafe Bos – so was in desperate need of an overhaul. 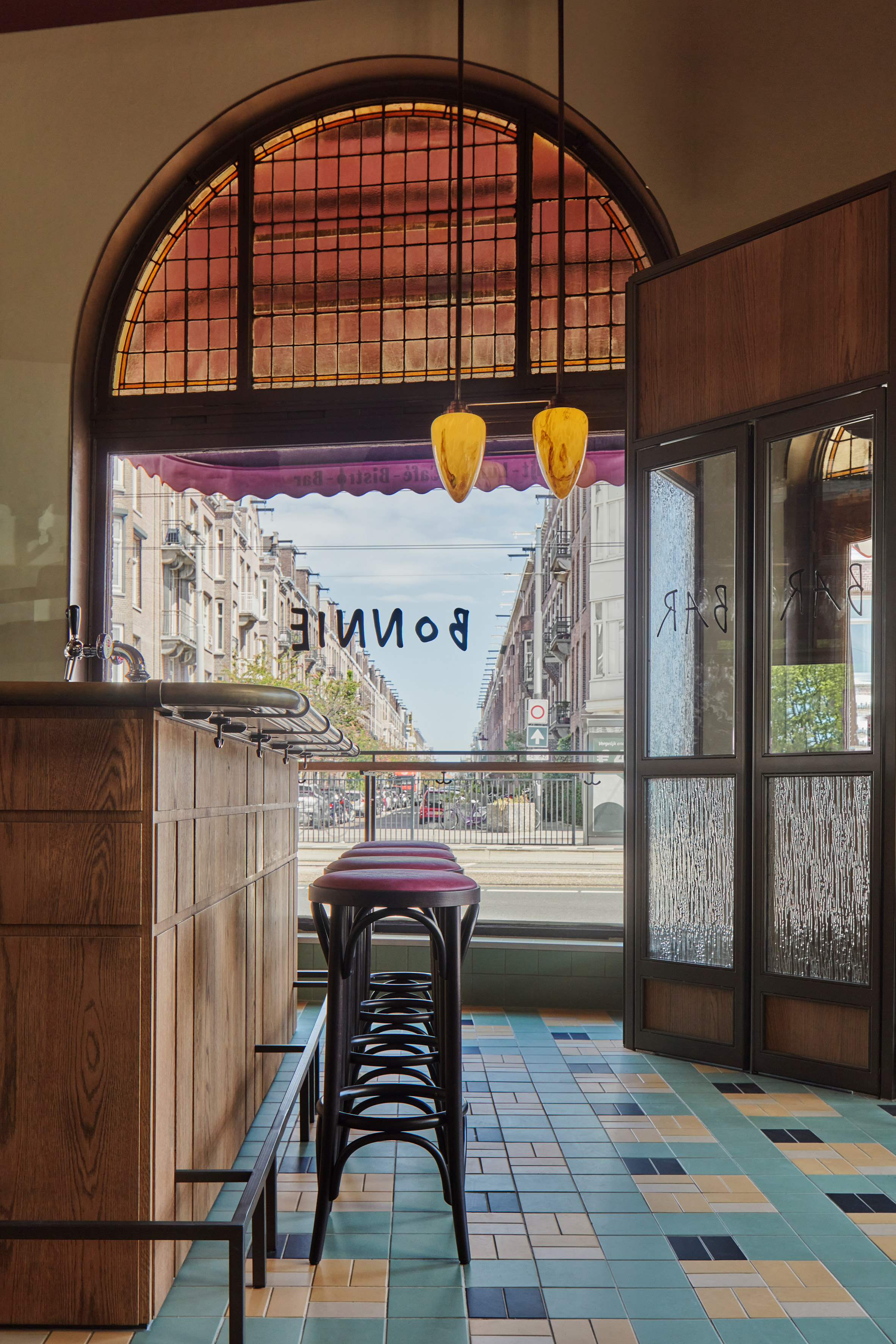 “This revived bar strikes the perfect balance between old fashioned and warmly familiar,” explained the locally based Studio Modijefsky, which came up with the venue’s new name.

“Bonnie is a nod to the past, celebrating all the devoted bar owners who served drinks and listened to stories for longer than they can remember, making everyone feel instantly at ease.” 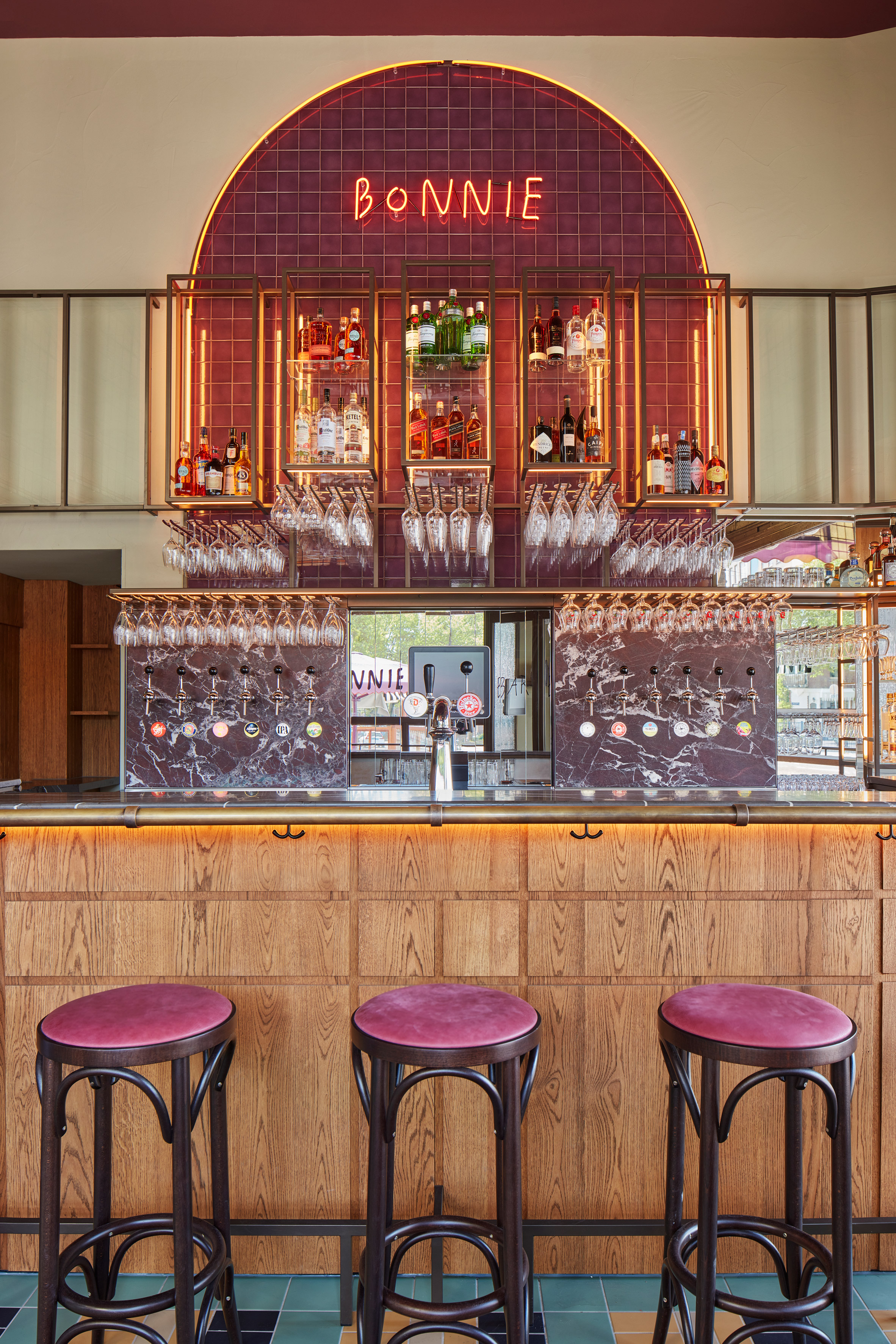 Hints of the restaurant’s history are immediately visible as soon as diners walk into Bonnie. A new wooden drinks bar that stands in the entryway has been carved with a linear pattern that resembles the panelling of the old counter.

Following the tradition of Bonnie’s former owner, this bar will have a special cabinet dedicated to Jenever, a gin-like, juniper-flavoured drink created in The Netherlands. 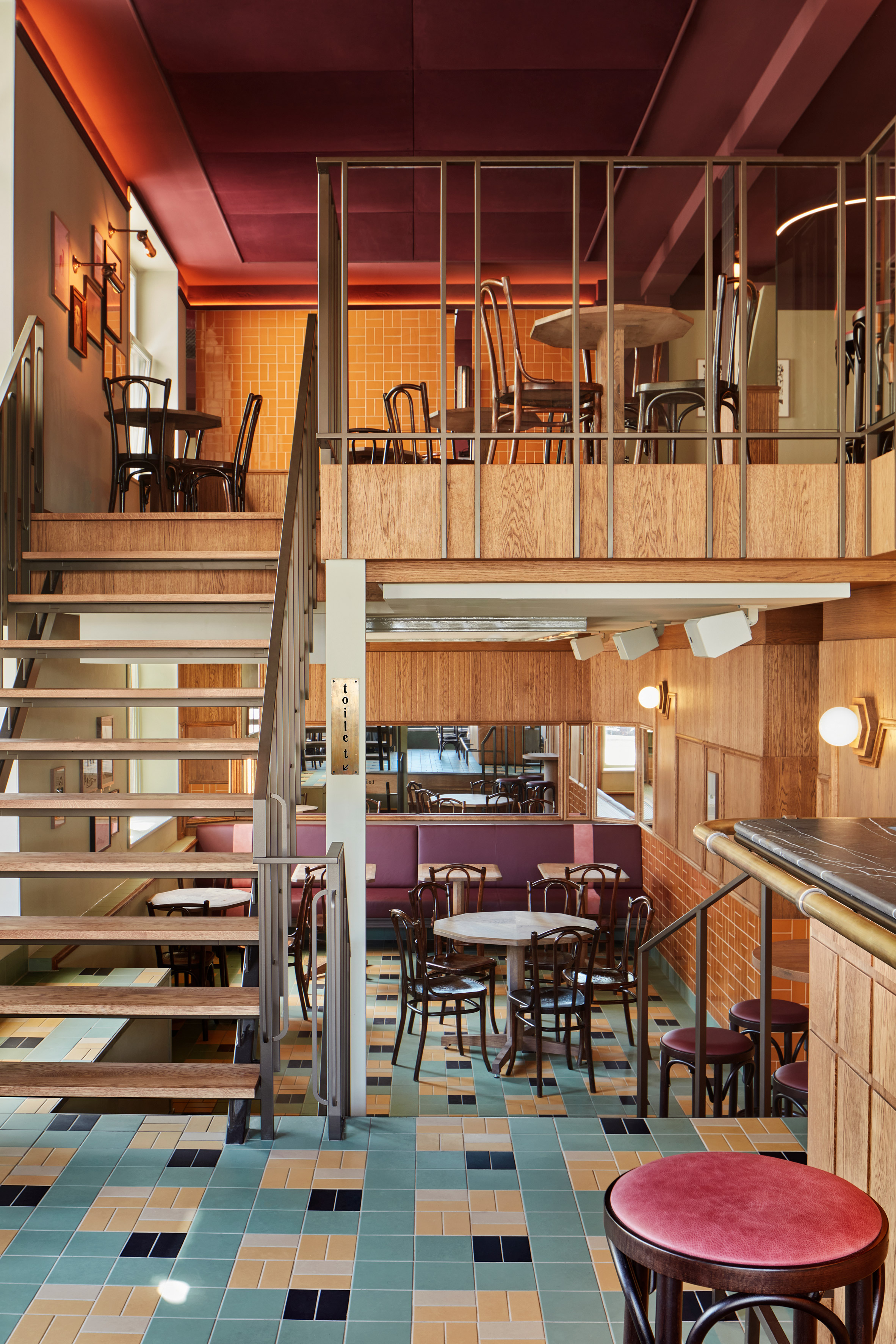 Other bottles of liquor are openly displayed inside boxy gold-framed shelves that are mounted on the rear wall. They sit against a purple-tile arched panel, its shape a nod to the huge vaulted windows that now punctuate the restaurant’s facade.

Slabs of veiny grape-coloured marble serve as a backing to the drink taps, and a row of plum leather bar stools have been placed in front of the counter. 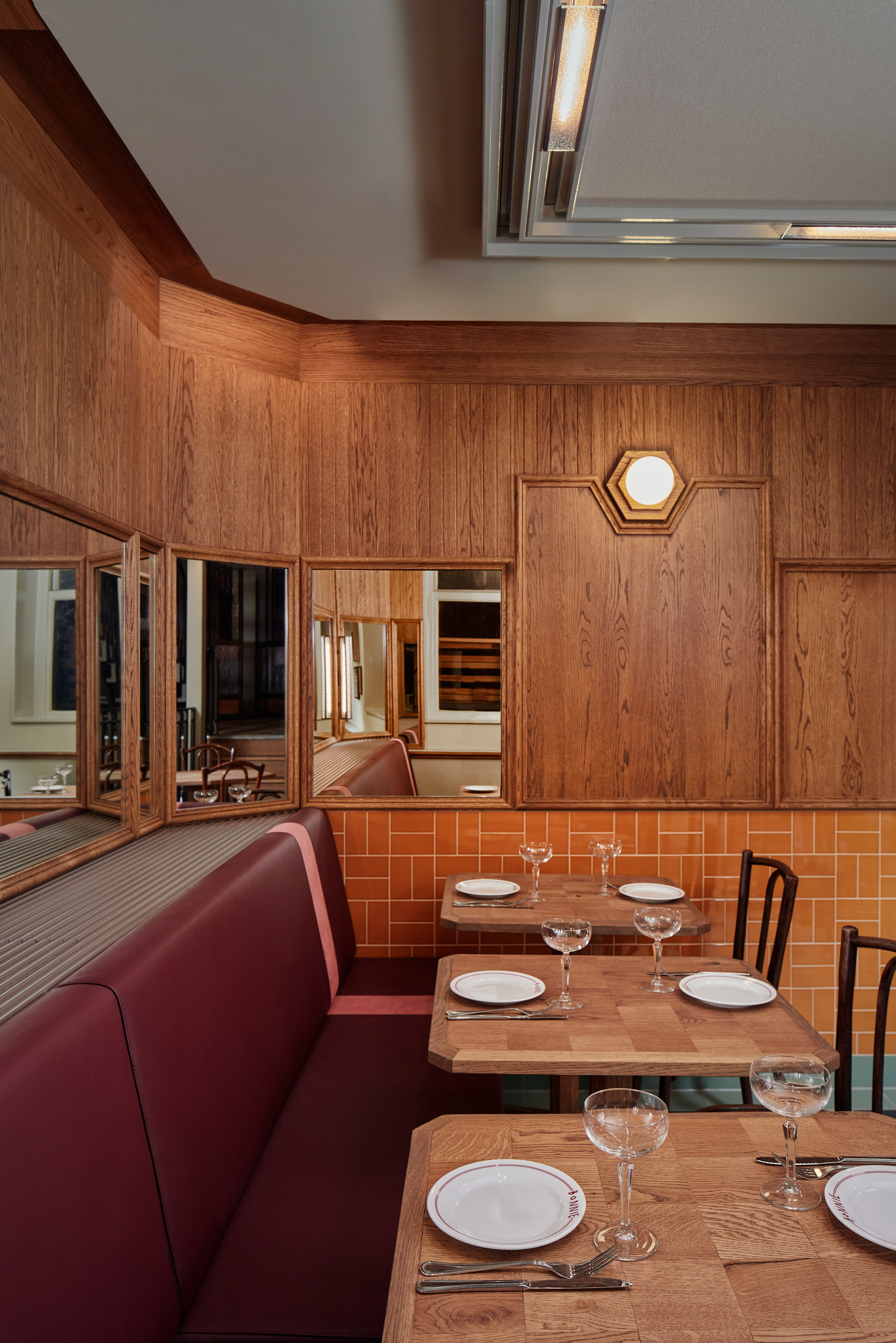 To emulate the tiled flooring of typical bistros, blue, white, black and pale-yellow tiles have been arranged in a graphic square pattern across the floor of Bonnie’s entrance and lower-ground level dining area.

The upper half of the room’s walls are wood-lined and inset with large mirrored panels, while the lower half is clad with glazed mustard-yellow tiles.

A deep-purple seating banquette runs along the back of the space. 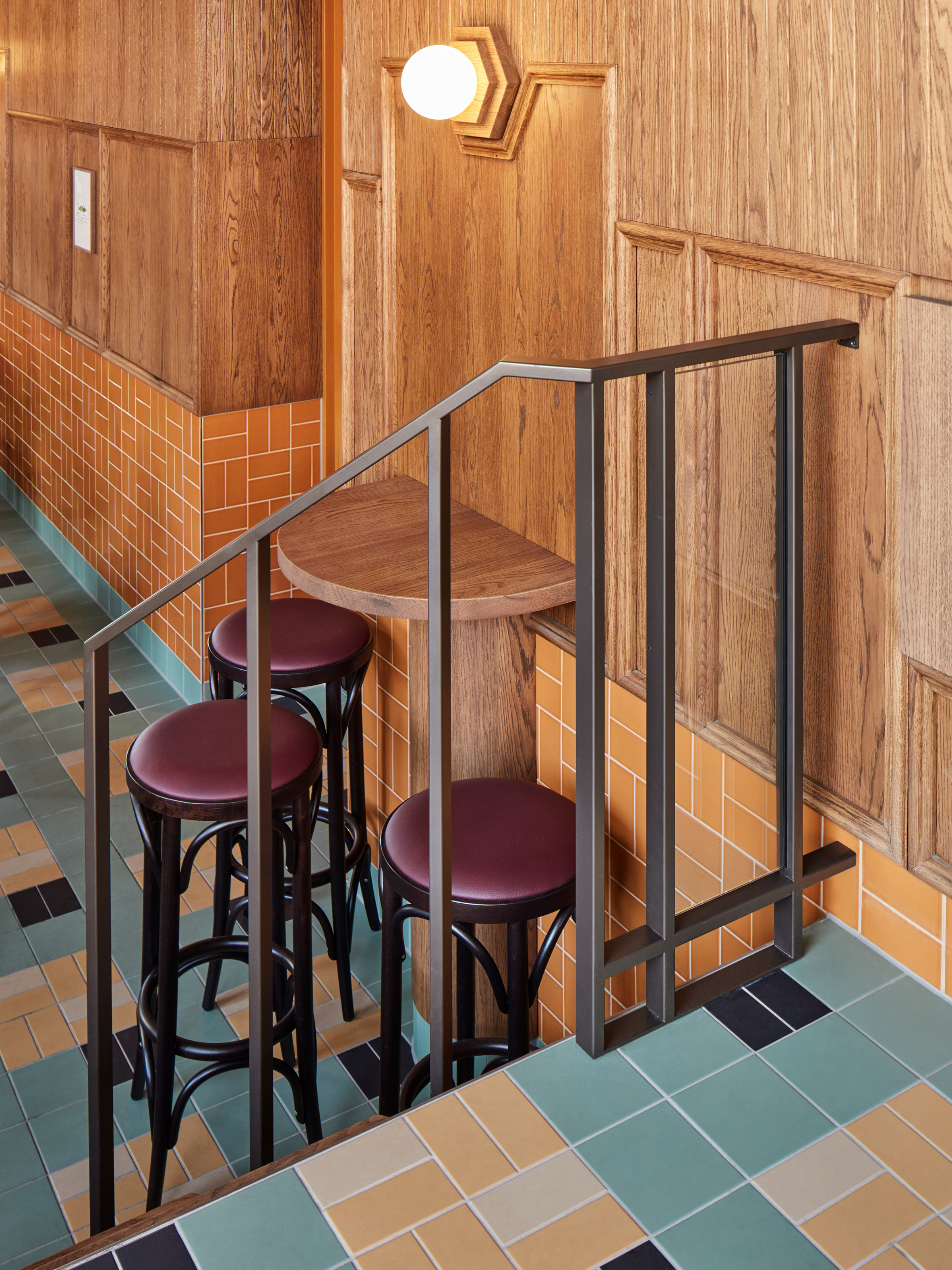 The furnishings at Bonnie’s appear very traditional at first, but have been finished with a quirky twist.

For example, a handful of the timber dining tables feature checkerboard-style countertops. The exposed-bulb wall sconces have also been set on hexagonal bases. 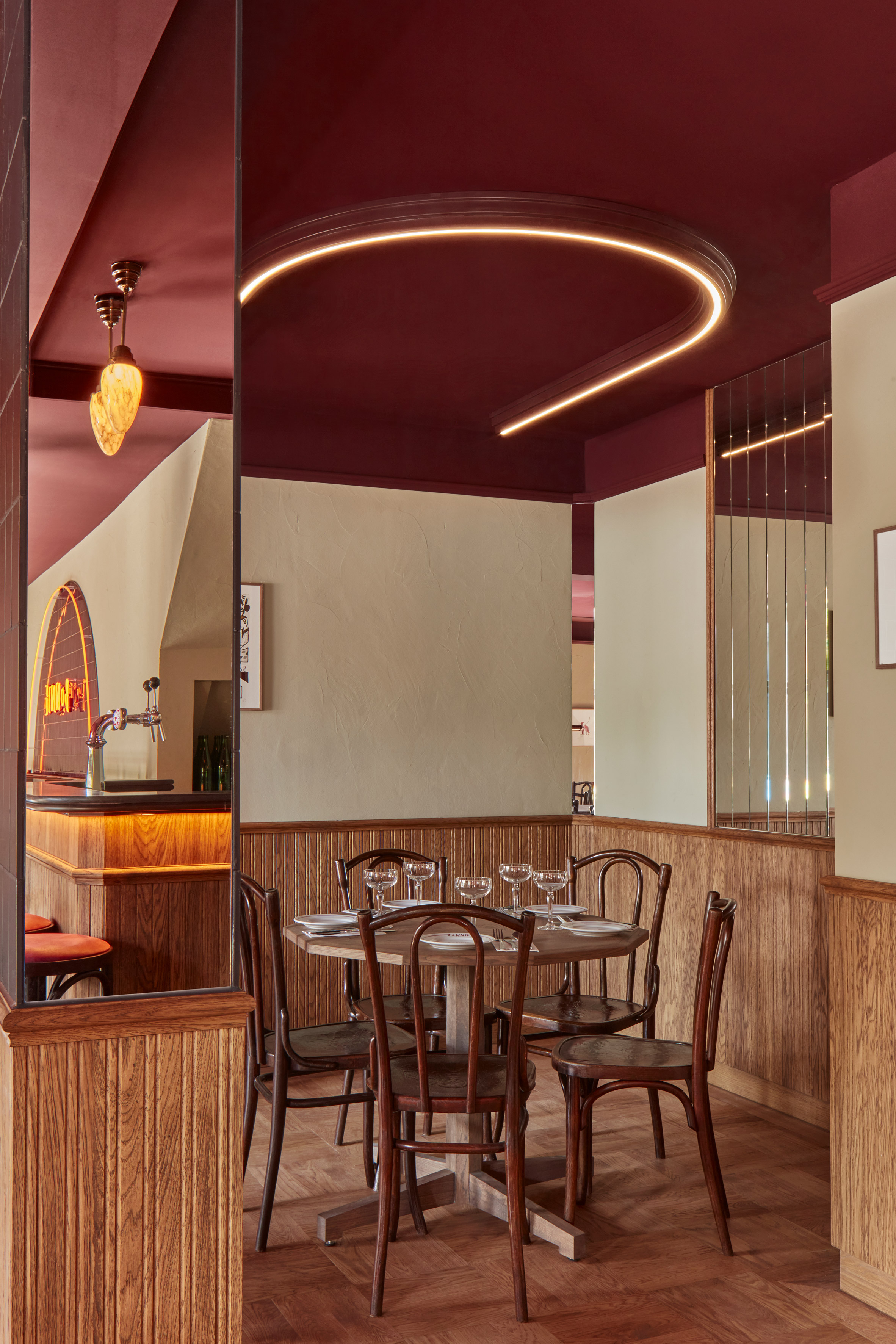 A short flight of steps leads up to the restaurant’s mezzanine level, which is meant to have a slightly more cosy and intimate feel.

Like downstairs, surfaces have largely been lined with grooved timber panels or mustard-yellow tiles, but the ceiling has been upholstered in rich burgundy fabric. 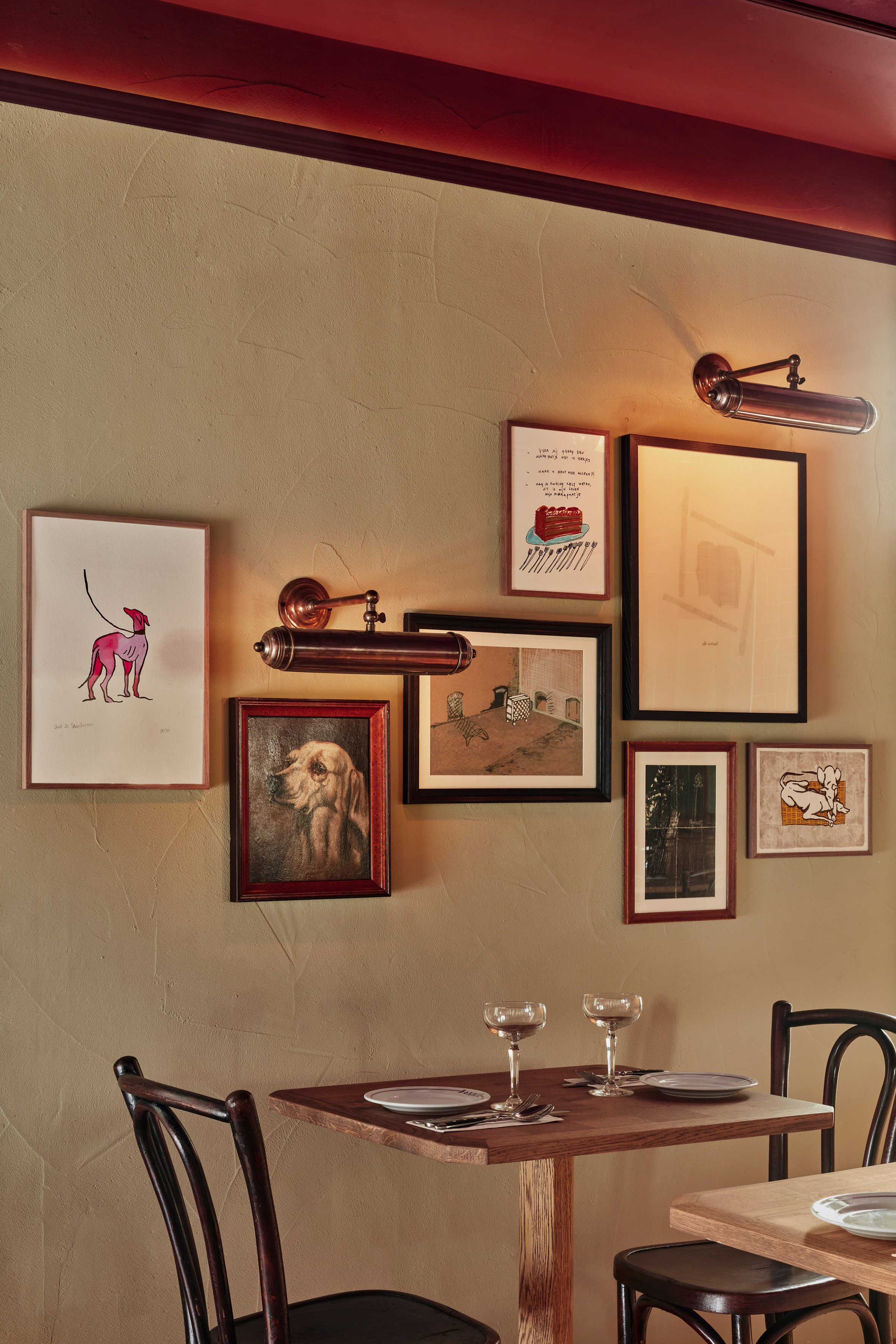 The square-pattern flooring seen in the entryway has also been reiterated at this level using wooden blocks.

A selection of framed sketches and paintings left behind by the previous owner have been hung on one of the walls as decor, along with a curved lighting fixture that, again, is meant to mimic the shape of the restaurant’s windows. 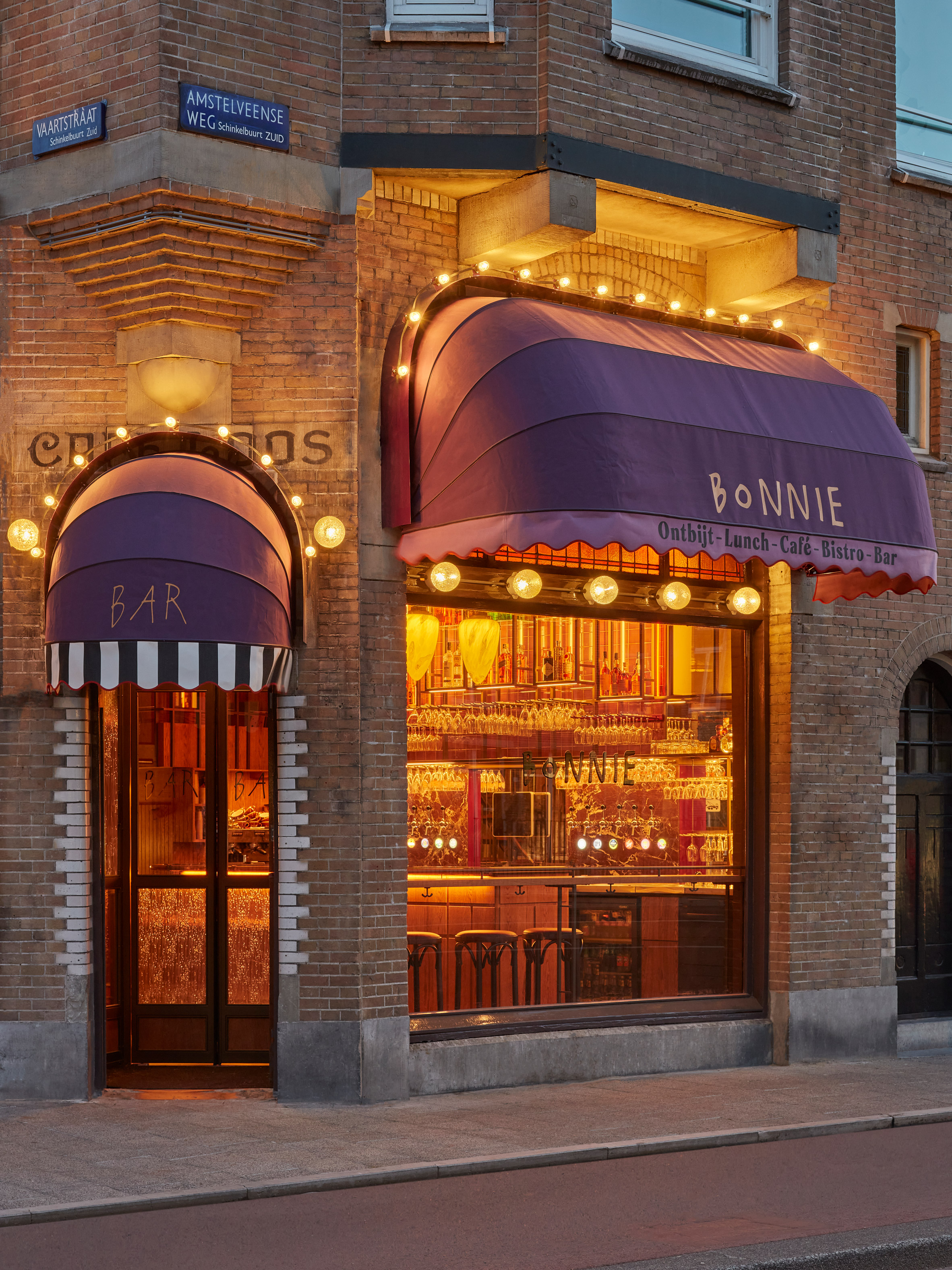 Bonnie joins a number of hospitality projects that Studio Modijefsky has completed in the buzzing city of Amsterdam.

Others include Karavaan, a restaurant that boasts a travel-themed interior, and Bar Botanique Cafe Tropique, which is filled with green foliage.

Photography is by Maarten Willemstein.