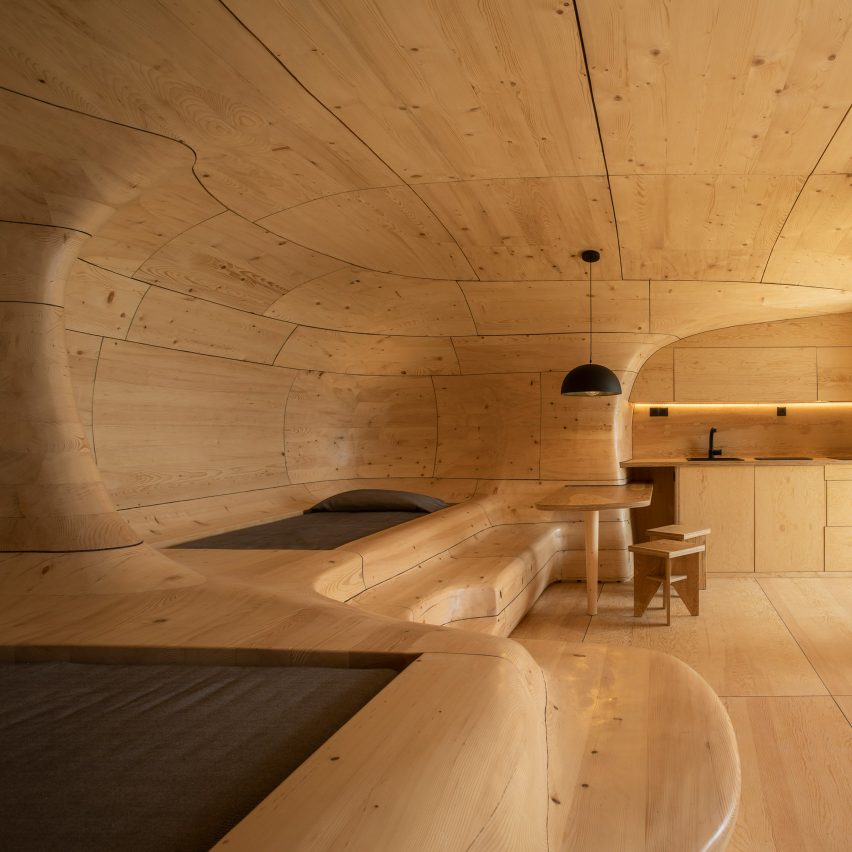 Sinuous spruce-wood walls wind around this cosy cave-like suite that Tenon Architecture has created for a resort hotel in southern Greece.

Wooden Cave is part of Hyades Mountain Resort in the village of Trikala Korinthias, which lies on the slopes of Mount Kyllini.

The suite sits at an altitude of 1,100 metres and has impressive views of the surrounding landscape, but Tenon Architecture was brought on board to revive its interiors. 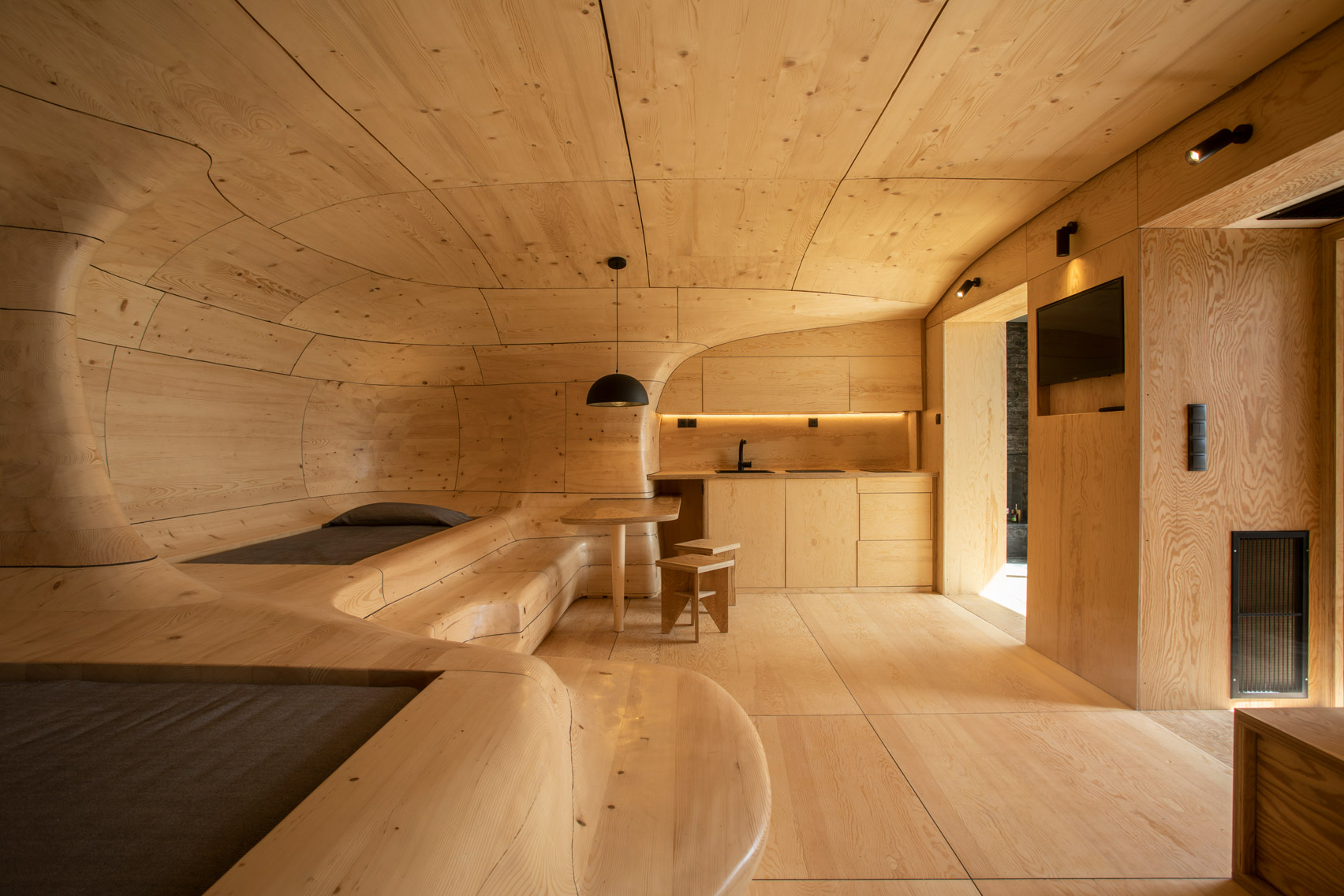 The studio decided to split the suite into two halves, each completed in different material palettes – the rear half is made almost entirely from wood, and features gently curved walls akin to those on the inside of a cave.

The front half of the suite, which is orientated towards the surrounding landscape and has more traditional linear surfaces, is decked out with ashy black tiles.

“This division intends to create a clear distinction between the hard, ‘protective’ shell and the curved, ‘inviting’ interior, reminiscent of the form of a cave that has been used as a refuge and a haven throughout human existence,” explained the studio. 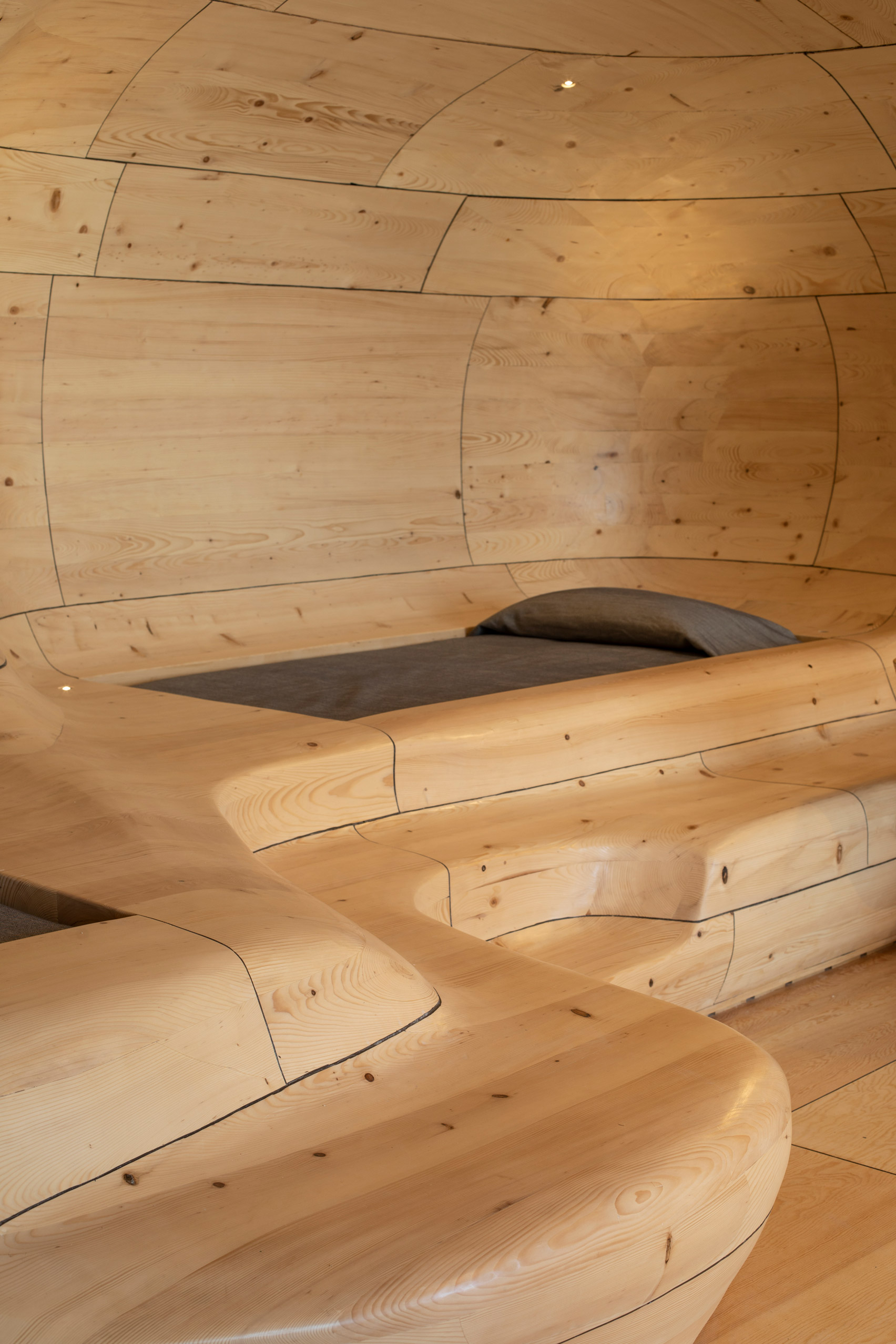 The sinuous wall and platform that winds around the rear side of the suite comprise 1,112 pieces of spruce.

An algorithm-based programme was used to draw out the required shape of each timber piece before they were cut to size on-site by two architects at the studio, Apostolos Mitropoulos and Thanos Zervos. 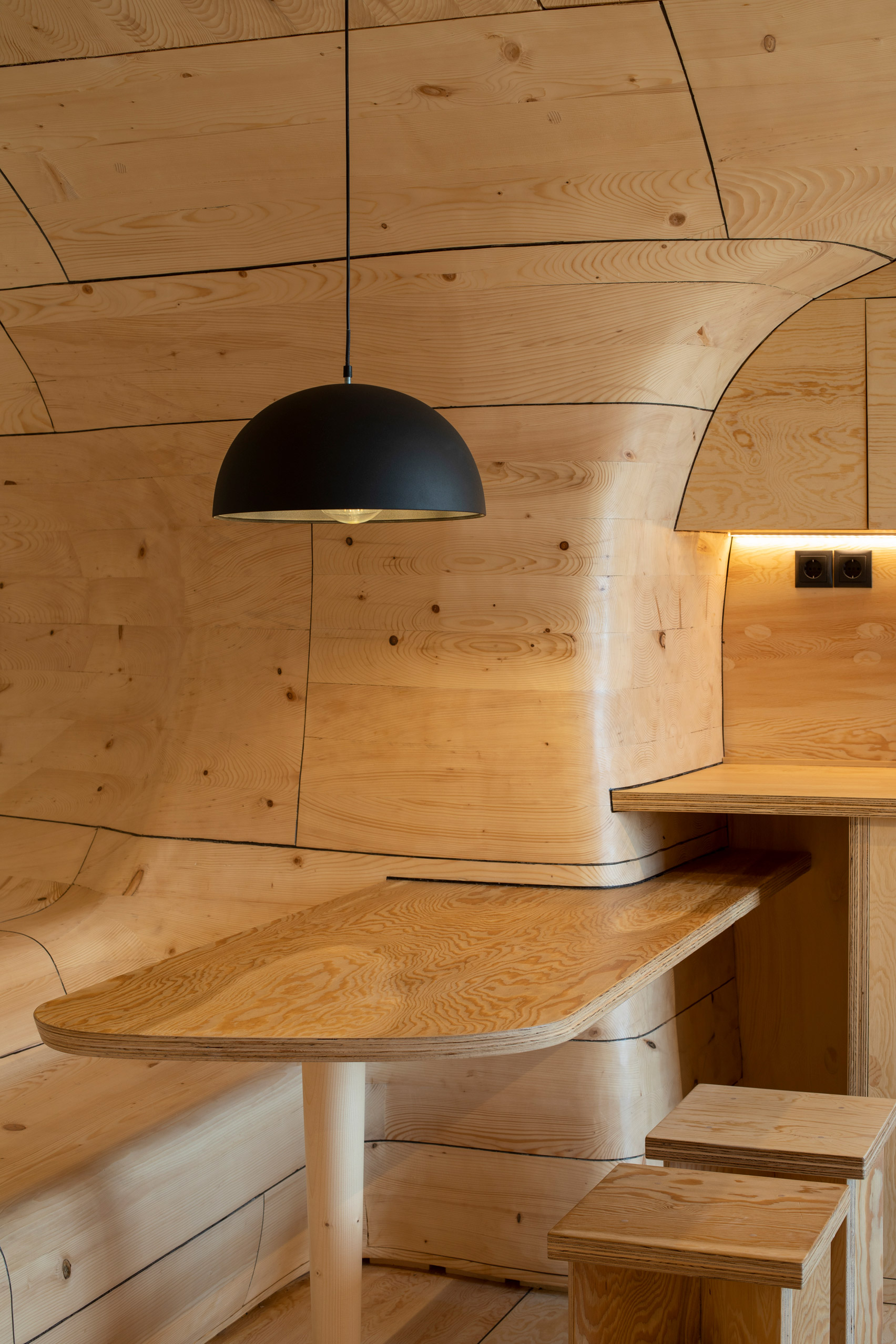 The pieces were then slotted together to form 55 large modules. After these were further shaped and smoothed by hand, they were assembled into the final cave-like structure.

“The absence of any digital fabrication methods in the construction resulted in the adoption of a more sculptural approach towards the final form,” added the studio. 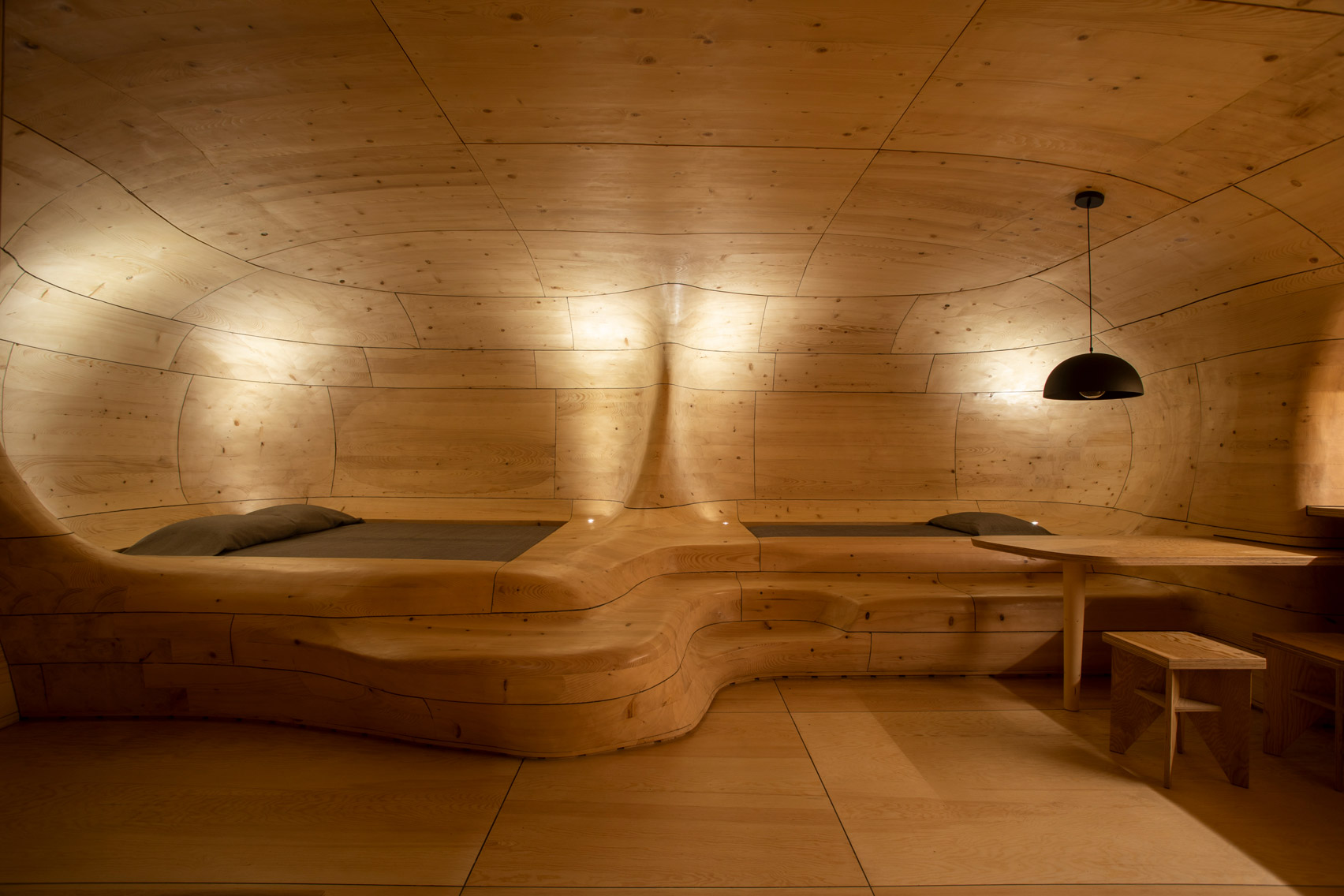 The studio made sure that the structure wasn’t erected flush against the suite’s concrete shell so that air would be allowed to flow freely behind and passively cool the space in the warmer summer months.

Two areas of the rear wall dip inwards to accommodate the double and single beds which have been built into the curving platform below. This platform has also been made wide enough so that, when necessary, it can double-up as a bench seat. 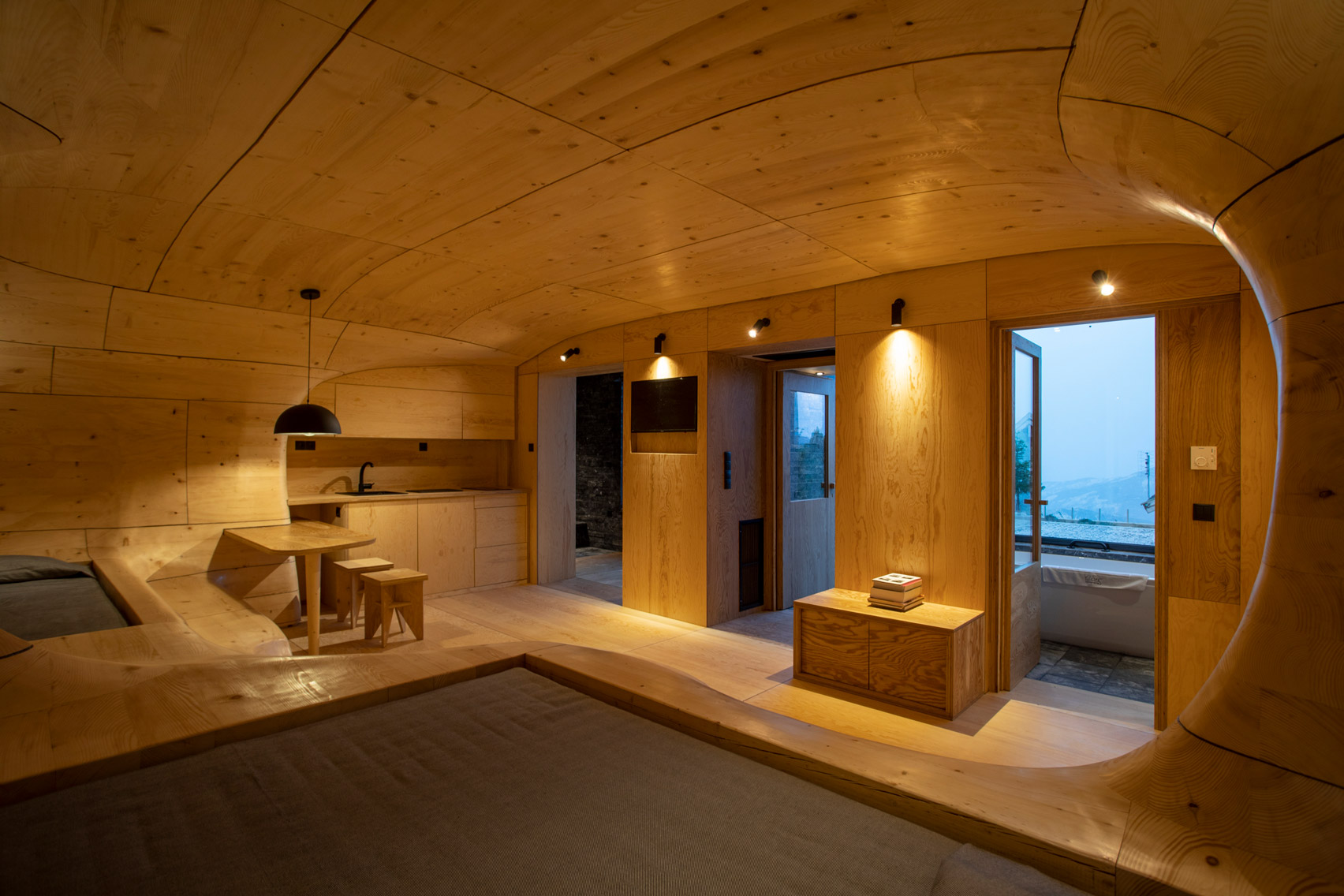 Other elements in the room, like the floorboards, cupboards of the kitchenette and the dining table that extends from the wall have been crafted from knotless pinewood.

Other details like the taps, spotlights and pendant lamp are jet-black. 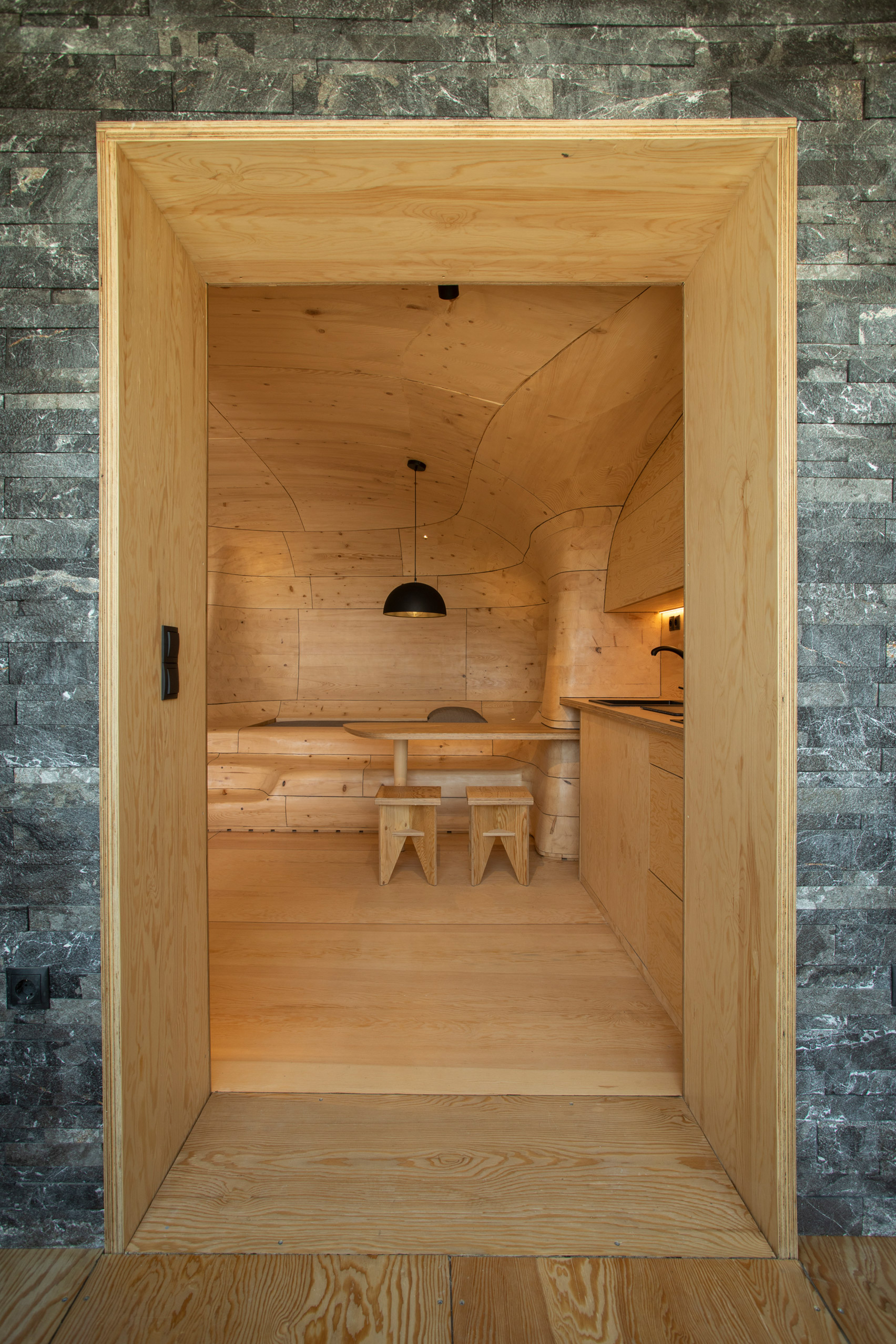 The dark stones tiles that have been applied to rooms in the front half of the suite were sourced locally in Trikala.

They cover the walls of the sitting area, which comes complete with a fireplace, and the bathroom, where the tub has been placed right beside the window so that guests can get a view of the nearby mountain peaks. 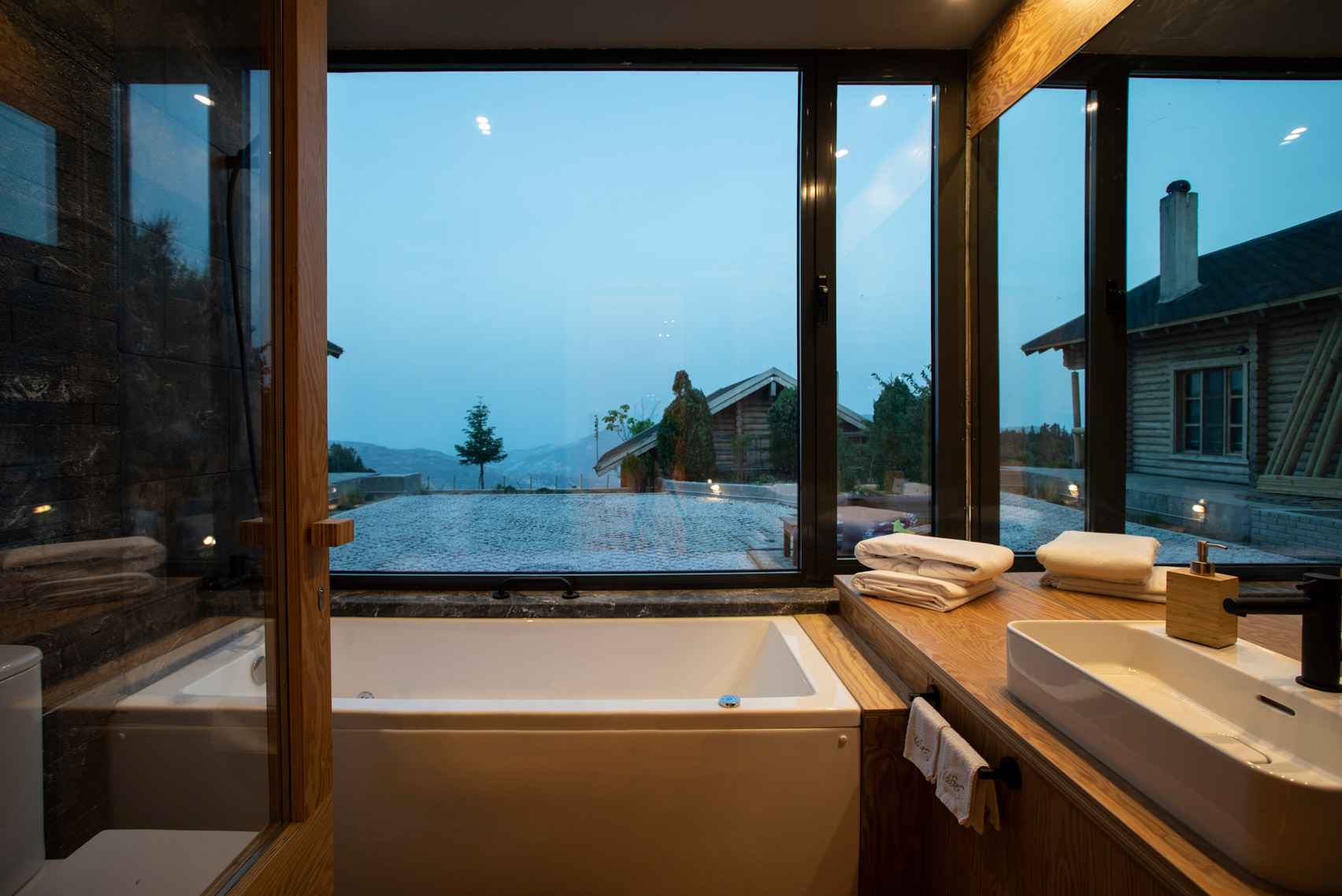 Tenon Architecture was established at the beginning of this year by Apostolos Mitropoulos and Thanos Zervos, who both focused on wood construction and carpentry during their architectural studies.

Similar to the practice, Koichi Takada Architects employed 40,000 pieces of wood to create towering, stalagmite-like columns inside the gift shop of the National Museum of Qatar.

The post Wooden Cave hotel suite in Greece is made from over 1,000 pieces of hand-cut spruce appeared first on Dezeen.