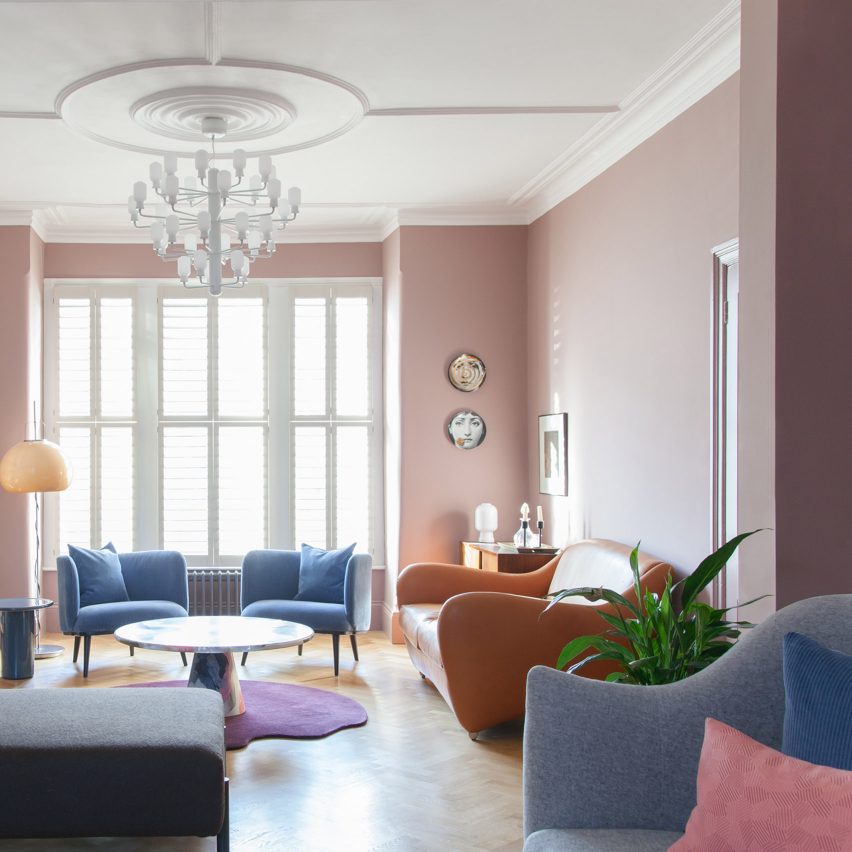 Louisville Road house falls under the Heaver Estate conservation area – a series of period properties that were constructed between 1888 and 1910 in south London’s Balham and Tooting neighbourhoods. 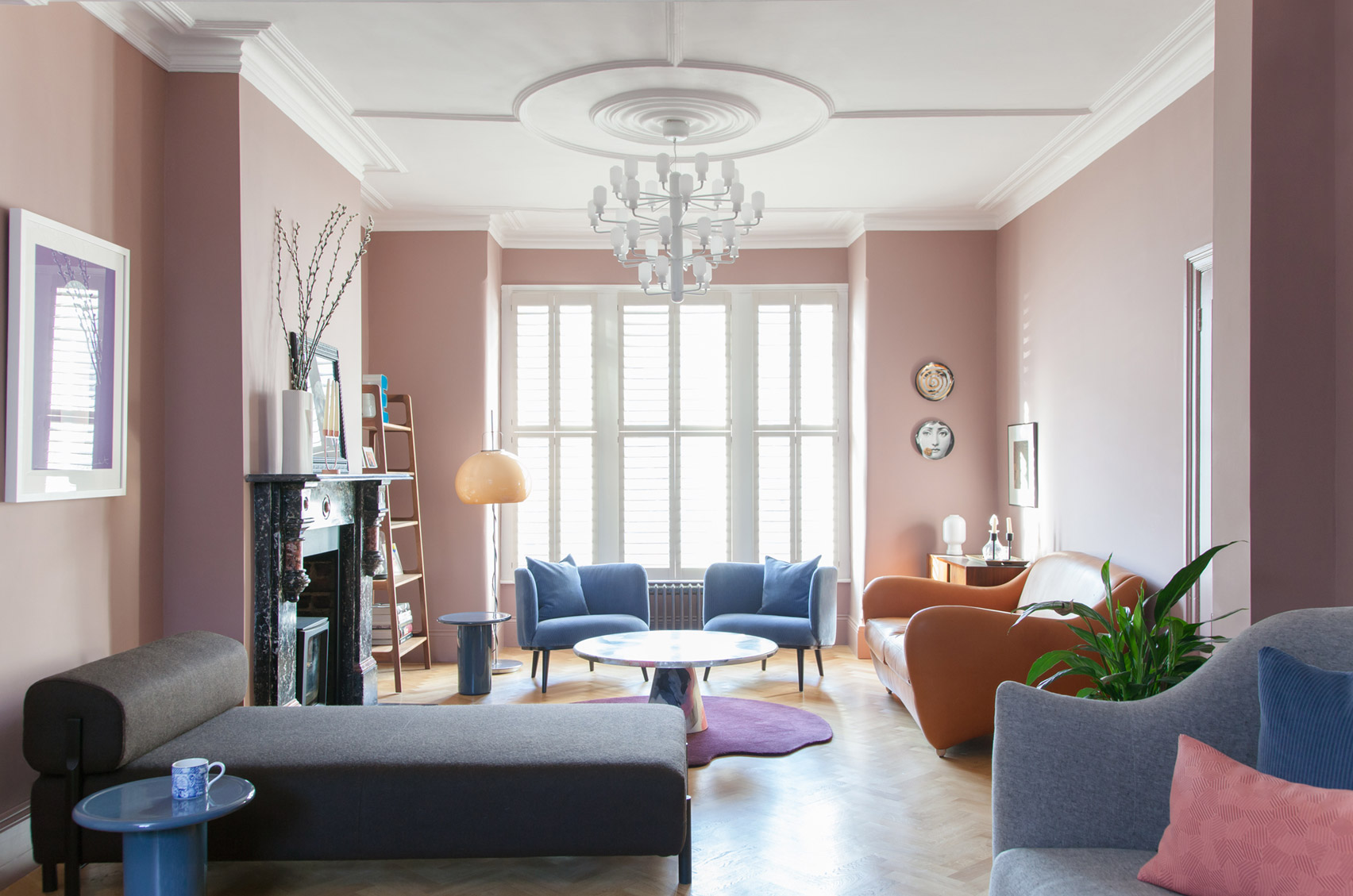 The house belongs to a couple with a young child who, over the past few years, had restored the house to good condition, but felt that it still lacked a cohesive aesthetic.

When 2LG Studio was brought on board, it decided to add colour to every living space. 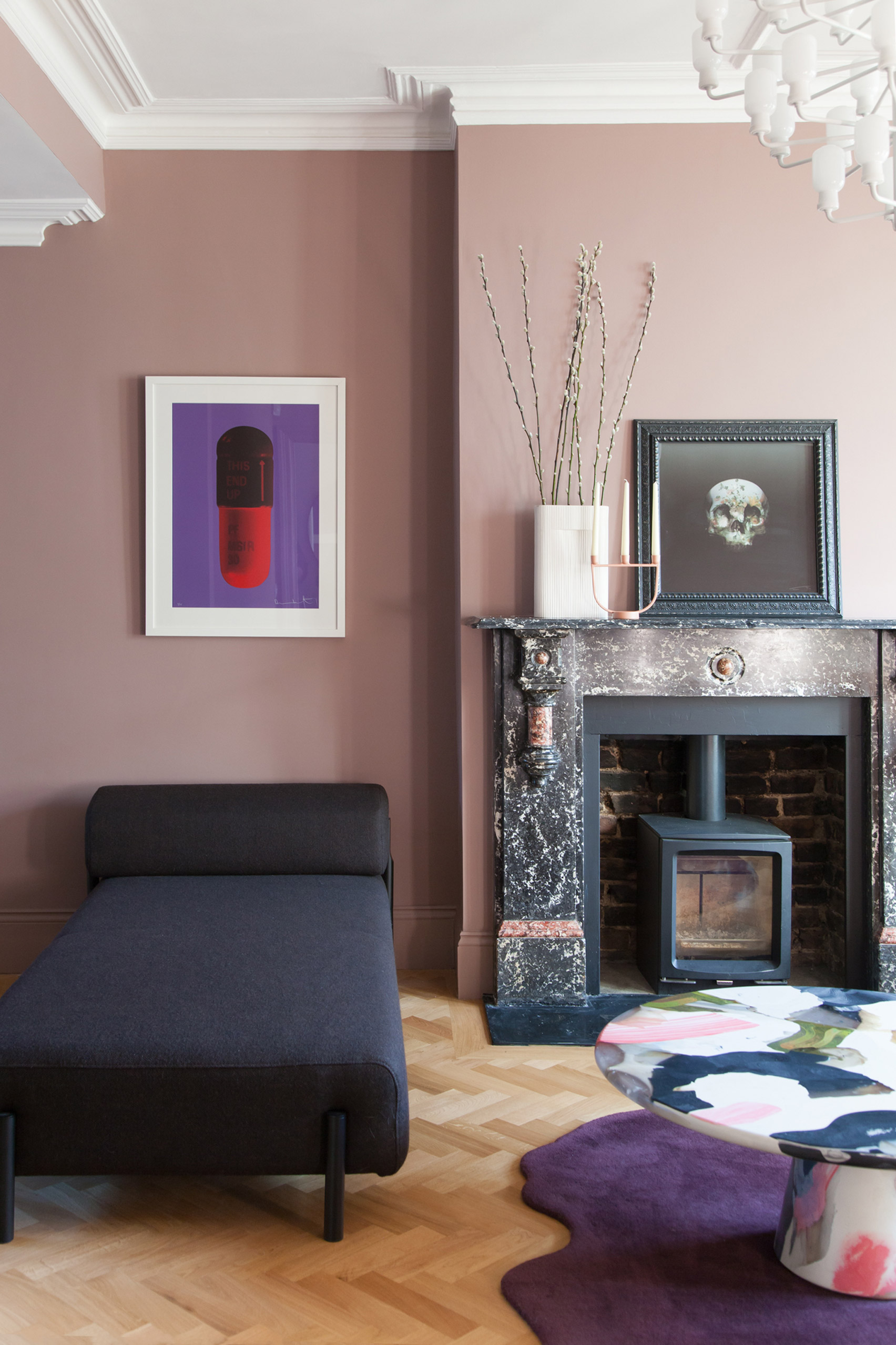 “They had some beautiful vintage pieces given to them by family and there were already some strong pieces of art that the couple had bought together – this helped to give us a strong idea of their style,” said the studio’s founders, Jordan Cluroe and Russell Whitehead.

“But they were struggling to bring it together as a whole,” they told Dezeen. “What it needed to make it feel like a home was some colour and life.” 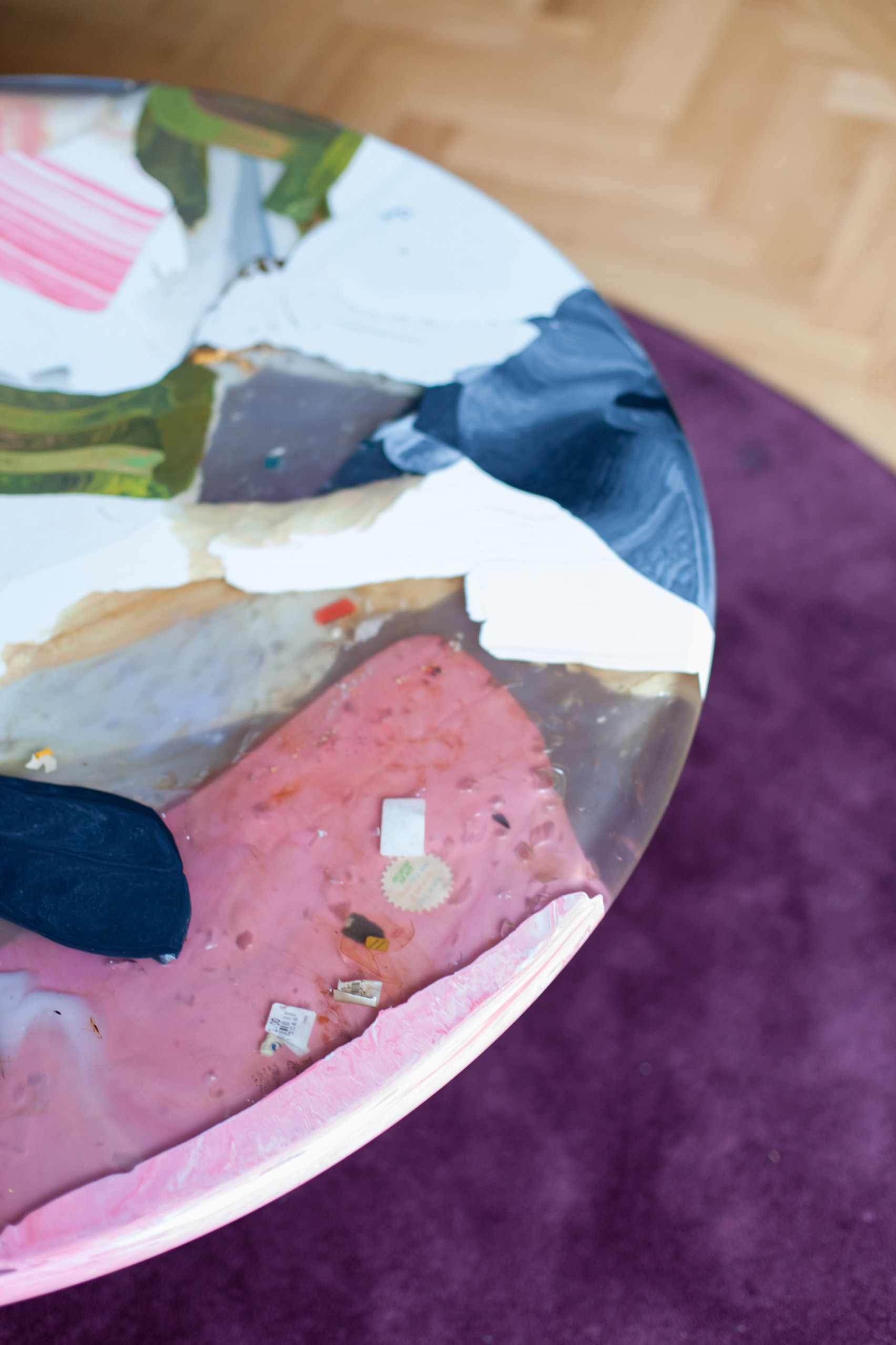 The most work was required in the living room, which the clients said was largely being used as a thoroughfare rather than a place to sit and relax.

Walls here have been painted dusky pink, drawing upon the pink detailing that can be seen on the room’s pre-existing stone fireplace. 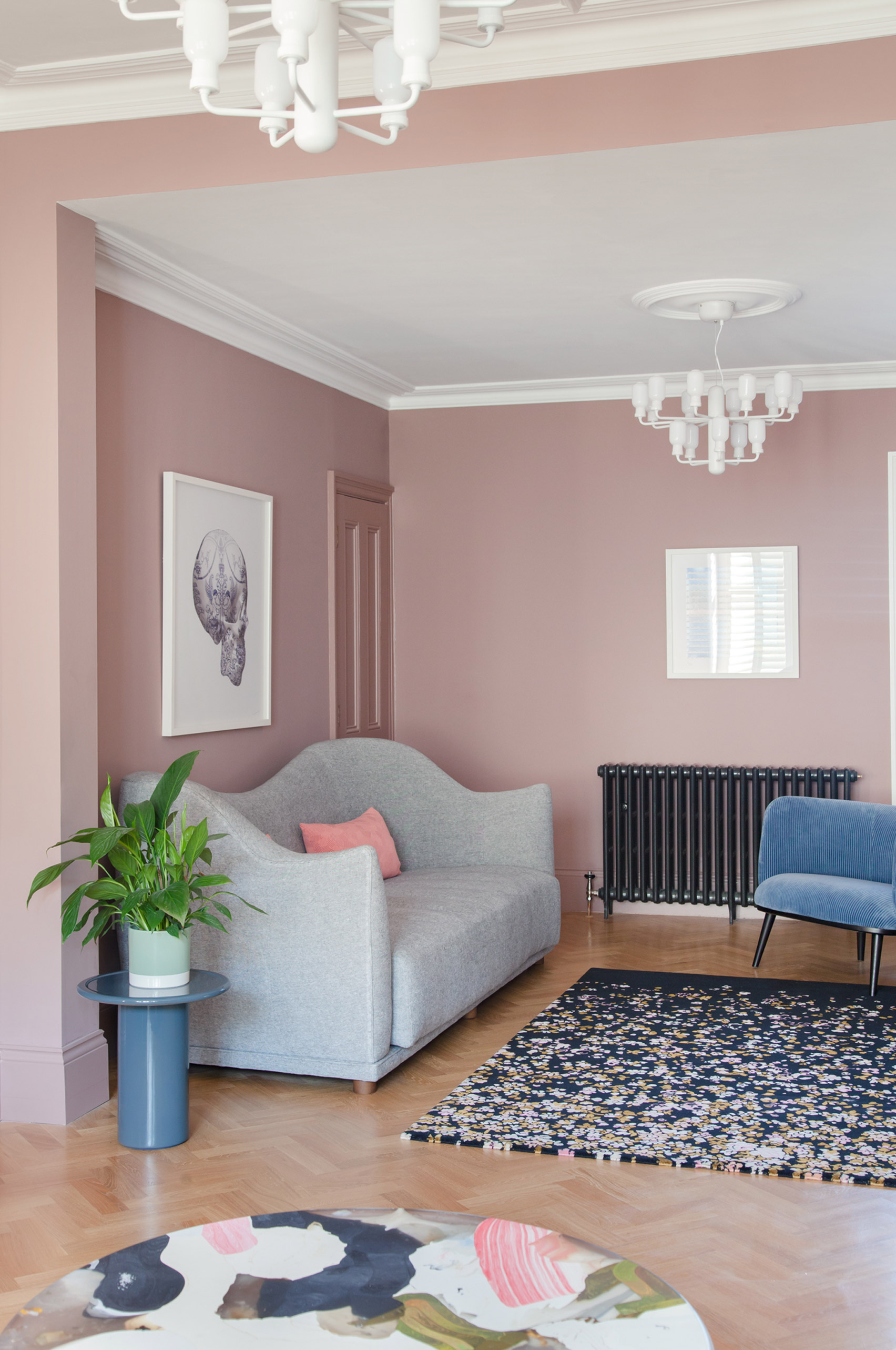 In the middle of the space is a deep-purple rug with wobbly edges. On top perches a Melting Pot coffee table by Dutch designer Dirk Vander Kooij, which is made from multicoloured pieces of discarded plastic.

Left-behind stickers and barcode labels are still visible in translucent areas of the table. 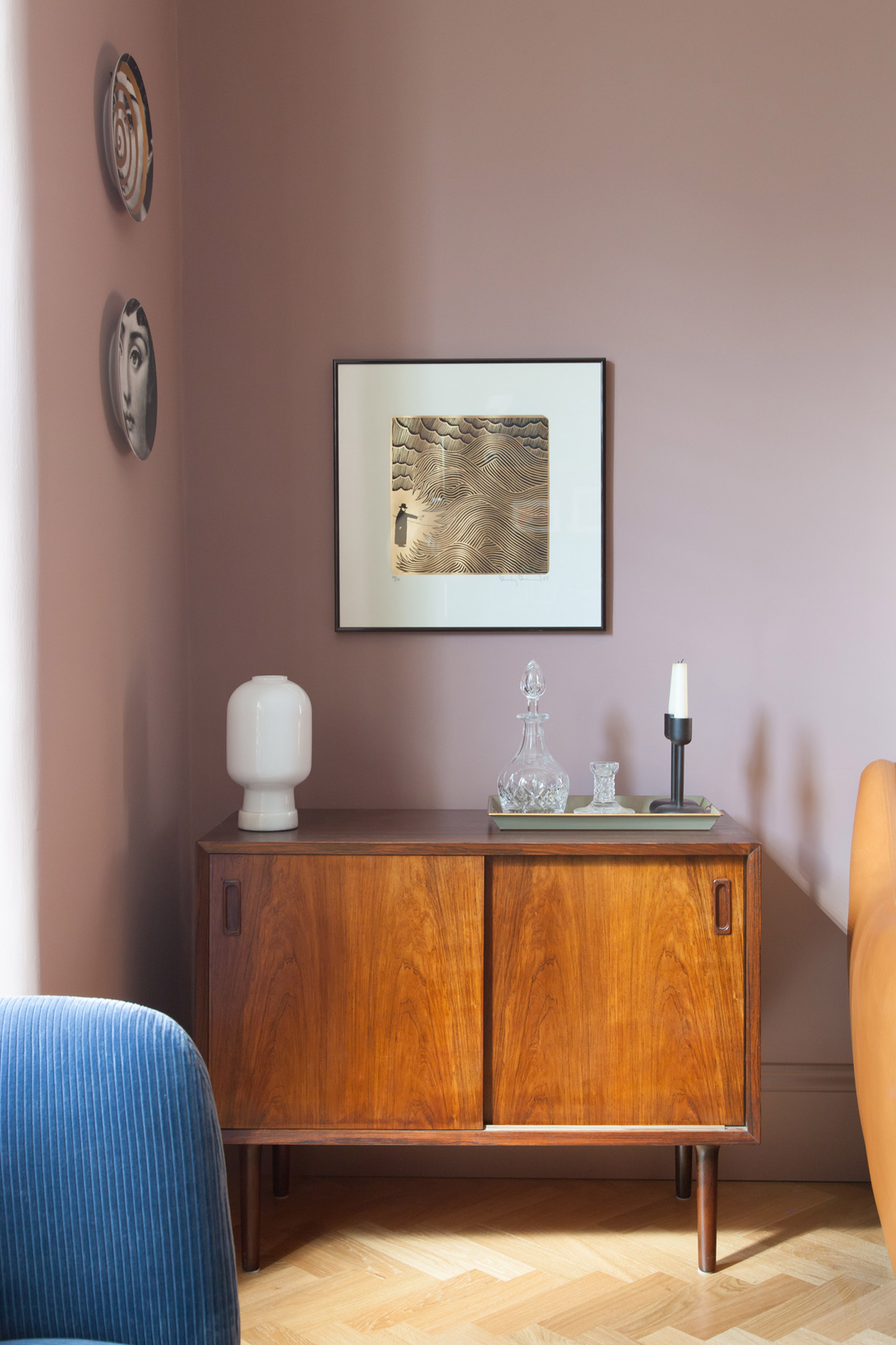 “We first met Dirk around five years ago in Paris where he was showing his first Melting Pot table and it was love at first sight, so we have always wanted to use this piece in a project,” explained Cluroe and Whitehead.

“It elevates plastic into something highly desirable.”

Other furnishings in the room include a curved tan-leather sofa, a couple of powder-blue velvet armchairs and a grey chaise longue. 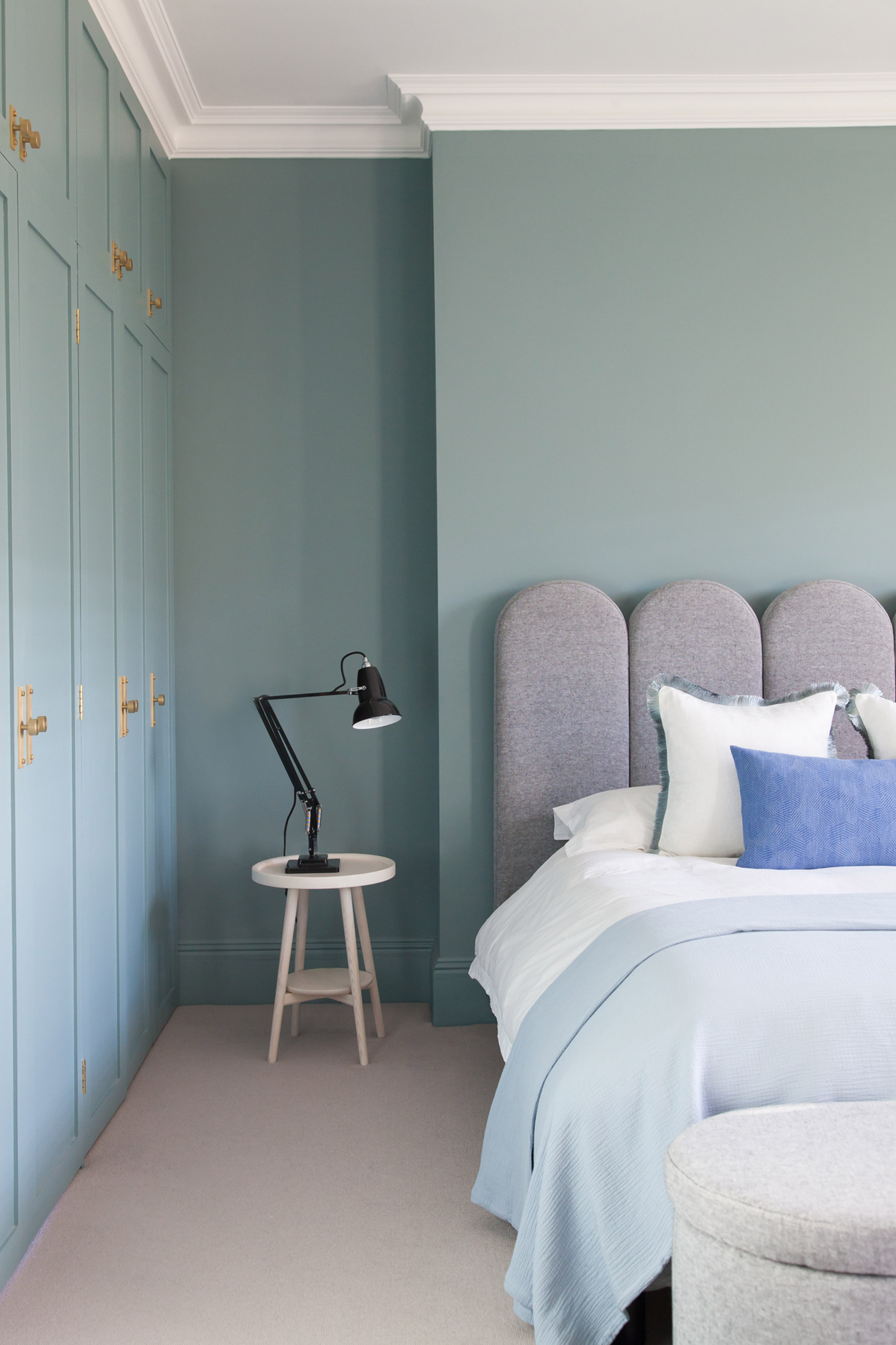 At the rear of the space there is a cosier snug dressed with pale-grey seating and a navy blossom-print floor covering designed by 2LG Studio.

Tiered white lights that the studio says offer a minimal take on the traditional chandelier have been suspended from the ceiling in both areas.

“[The lights] are fitting for the grandeur of the ceiling rose, but unexpected in style – it provides contrast,” added the pair. 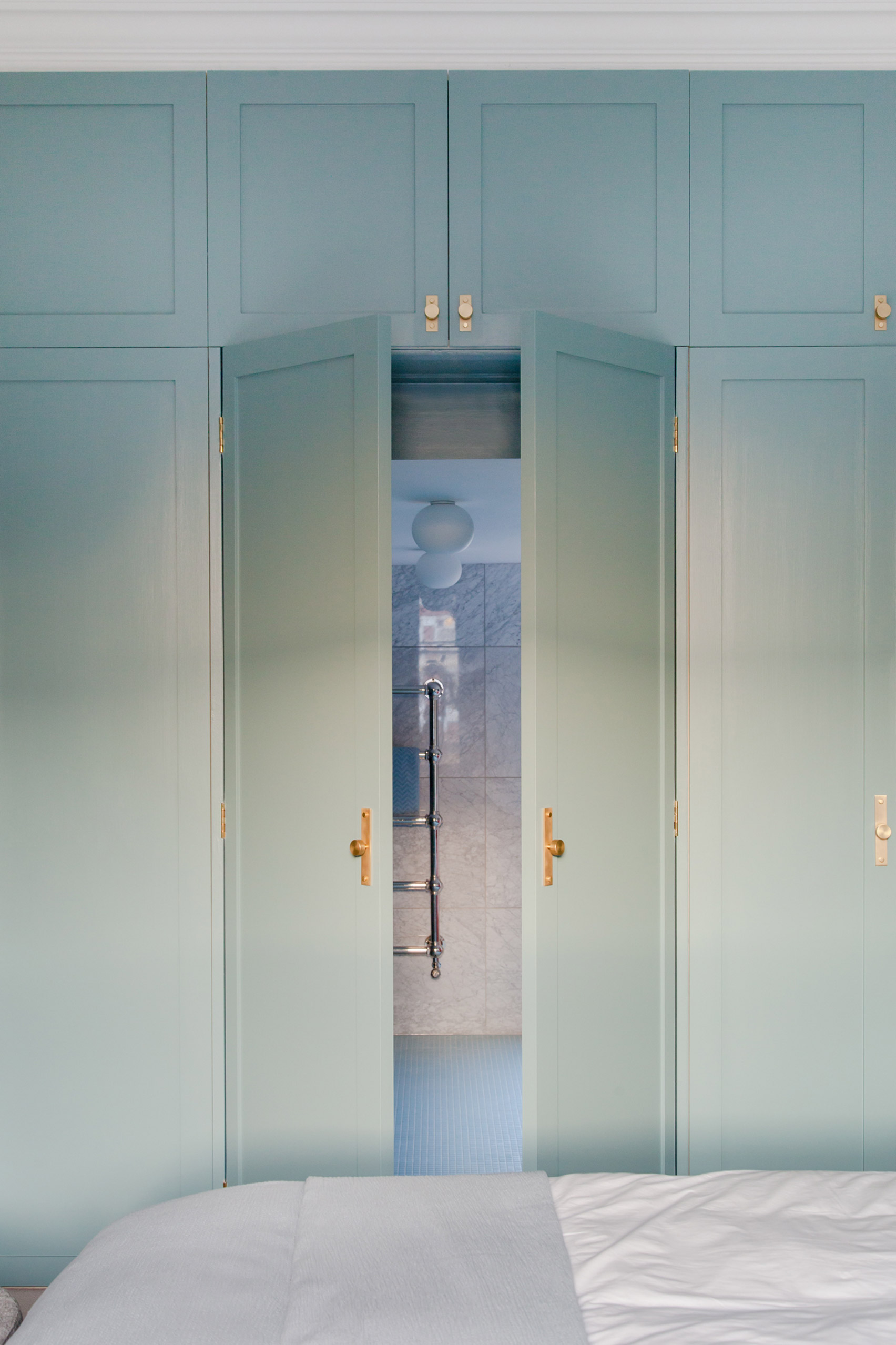 Steel-blue surfaces appear throughout the master bedroom upstairs. The bed frame, with a cushioned vaulted headboard, and rounded ottoman are from 2LG’s own Love Your Home furnishing collection.

A set of doors in the full-height fitted wardrobes can be drawn back to unexpectedly reveal en-suite wash facilities, a feature the studio included to bring “an element of wonder” to the bedroom. 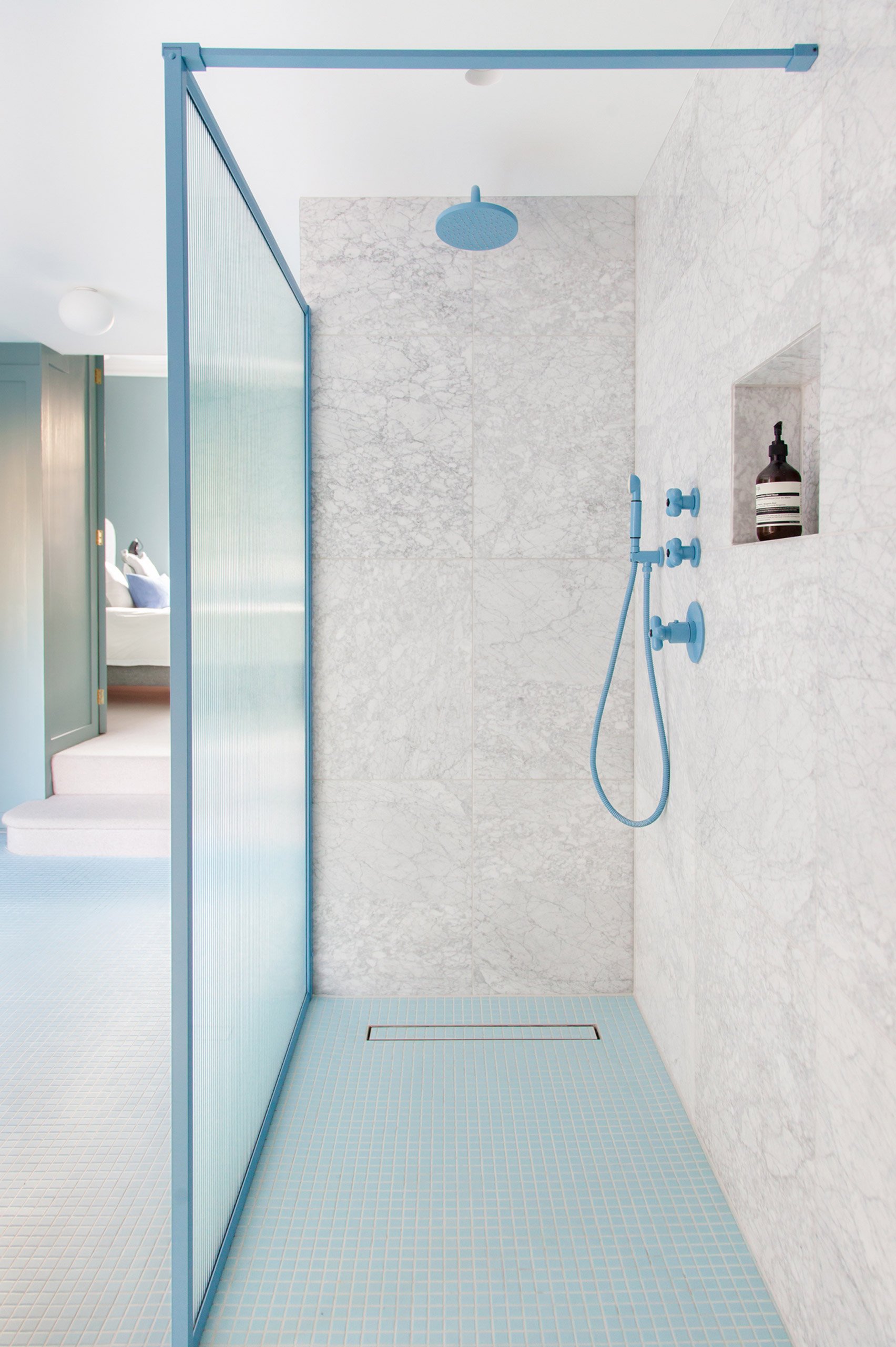 The bathroom’s walls are clad with pale marble, while baby-blue tiles cover the floor.

This same shade of blue has been used for the taps and the bordering around the fluted-glass shower screen. 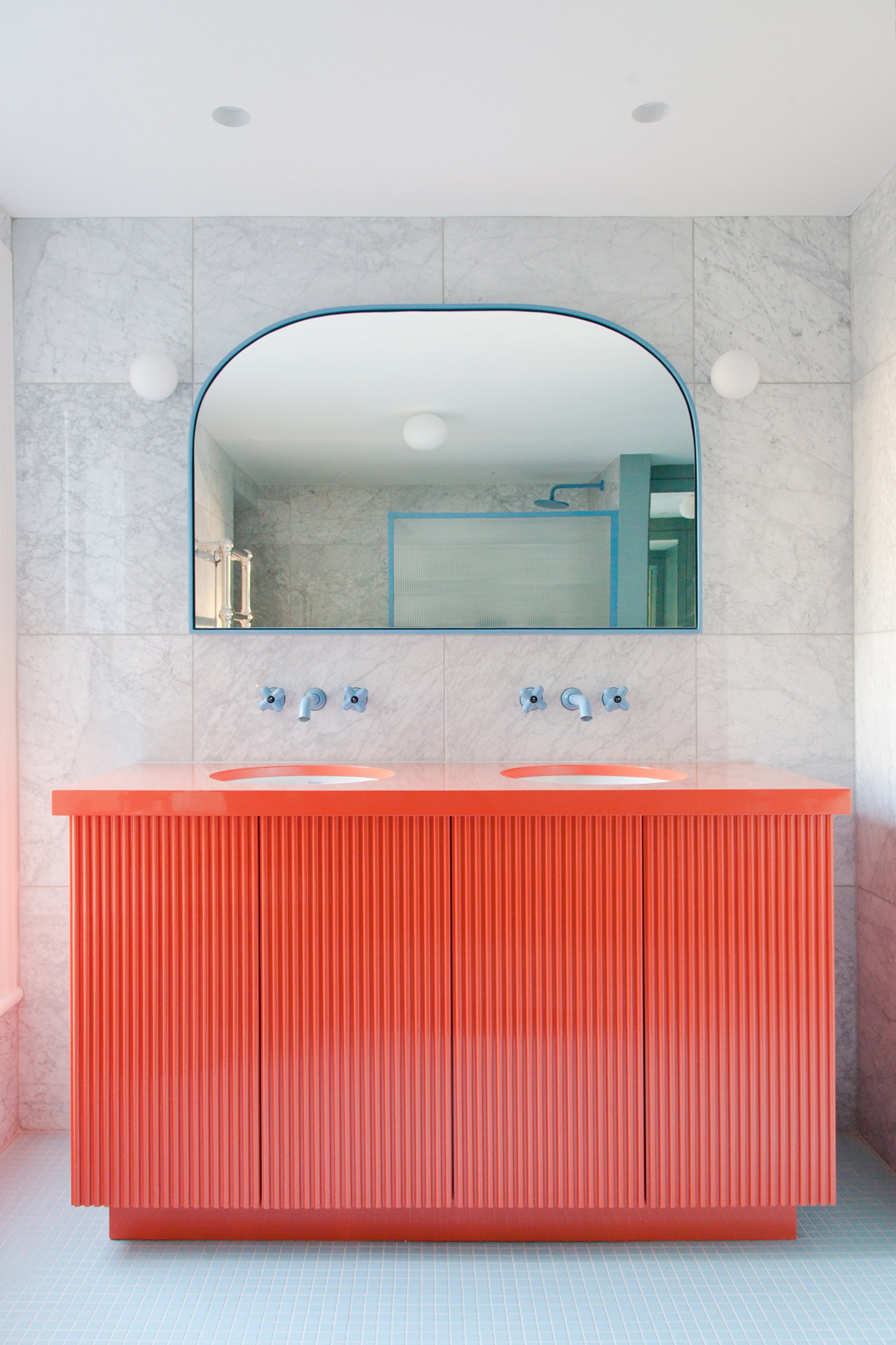 Baby blue tiles and a coral basin stand similarly feature in the guest shower room, which has also been updated by the studio. 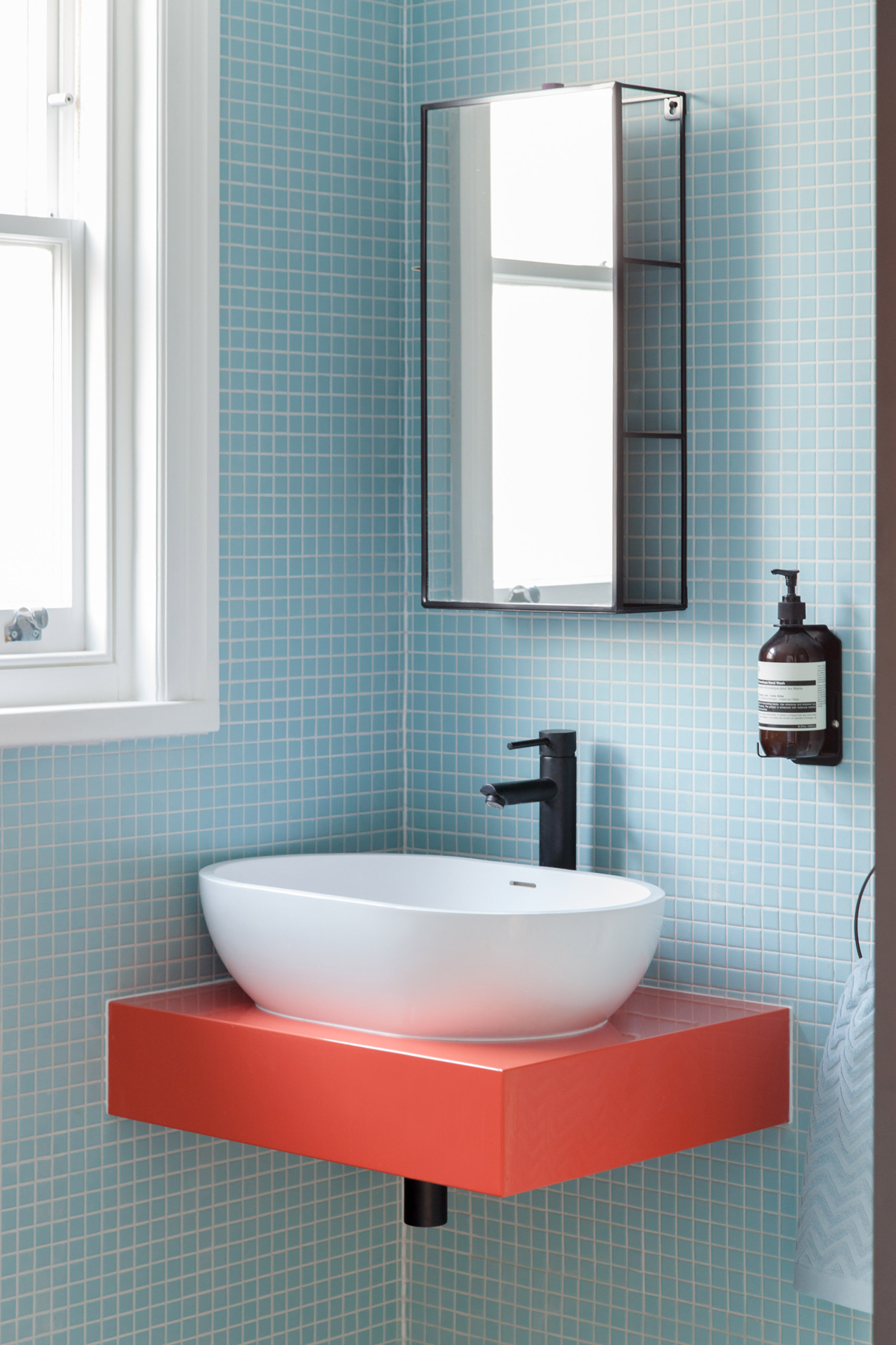 2LG Studio was established by Jordan Cluroe and Russell Whitehead in 2014. Previous projects by the studio include the transformation of a run-down house in London’s Forest Hill into a whimsical live-work space, complete with pink walls and scallop-edged doors.

Others embracing the colourful style of the movement include Yinka Ilori, Camille Walala and Morag Myerscough.

Photography is by Megan Taylor.