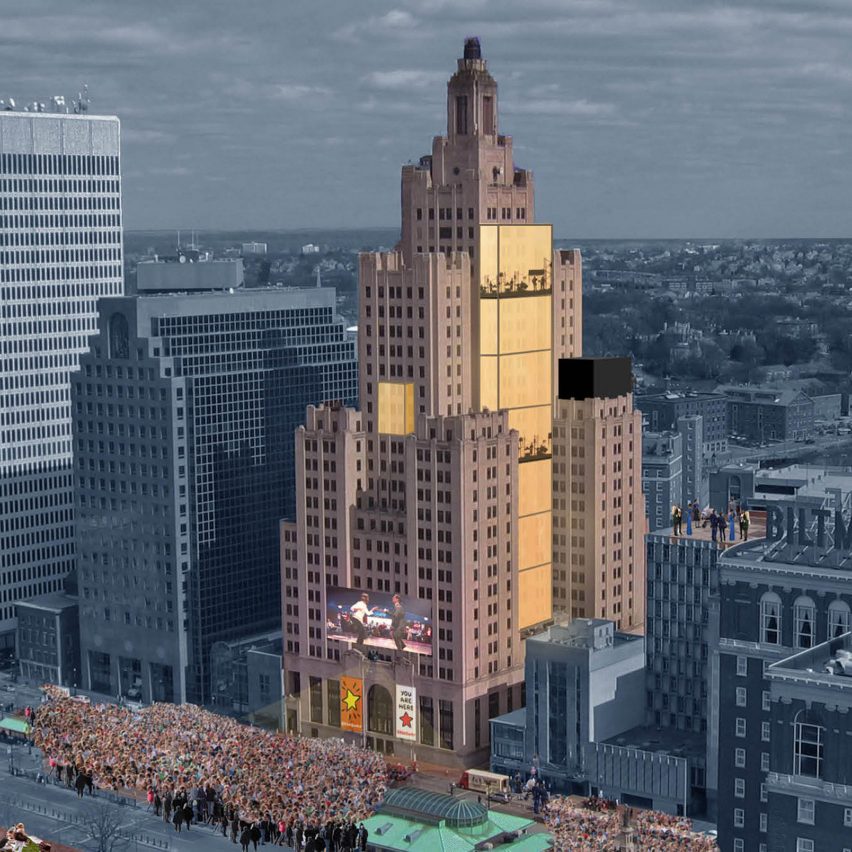 The art-deco building was built in 1928 by Walker & Gillette and George Frederick Hall as the Industrial Trust Building. It has been vacant for almost eight years and is listed by the Providence Preservation Society (PPS) as an endangered property.

Its visual similarity to the Daily Planet office building in the DC comics series influenced its nickname as the Superman Building.

Students worked with the PPS and the city planning office to each propose their own design for the interiors of the vacant structure. Each of the proposals was presented virtually on 22 May and can be viewed online. Read on for the seven designs: 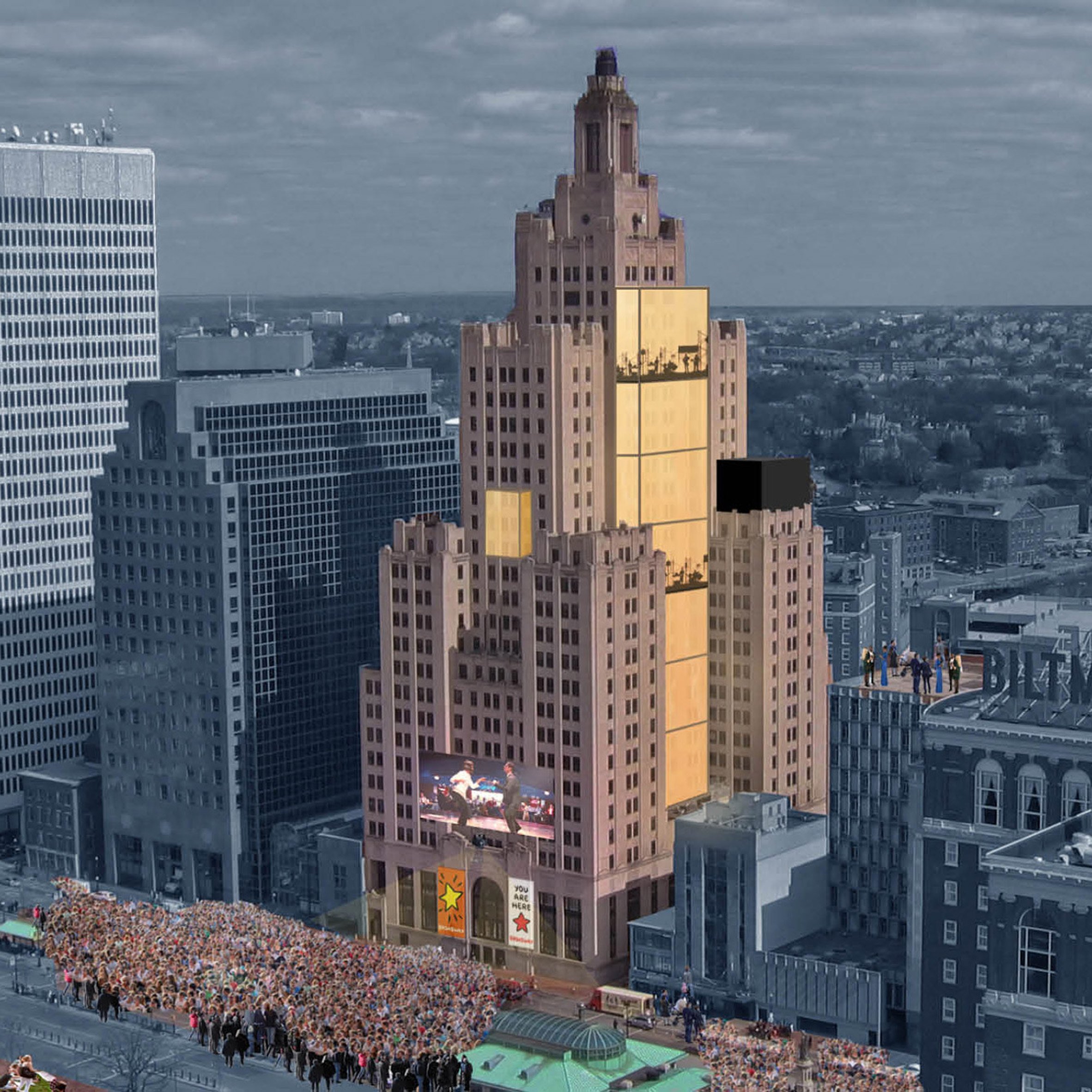 The Second Act by Ankit Mandawewala

Ankit Mandawewala’s proposal involves converting the building into several theatre and performance spaces. A jazz bar occupies the basement level and terraces would be situated on the higher floors.

Large LED screens cover a portion of the steel-framed structure to create a drive-in theatre on the city streets below. 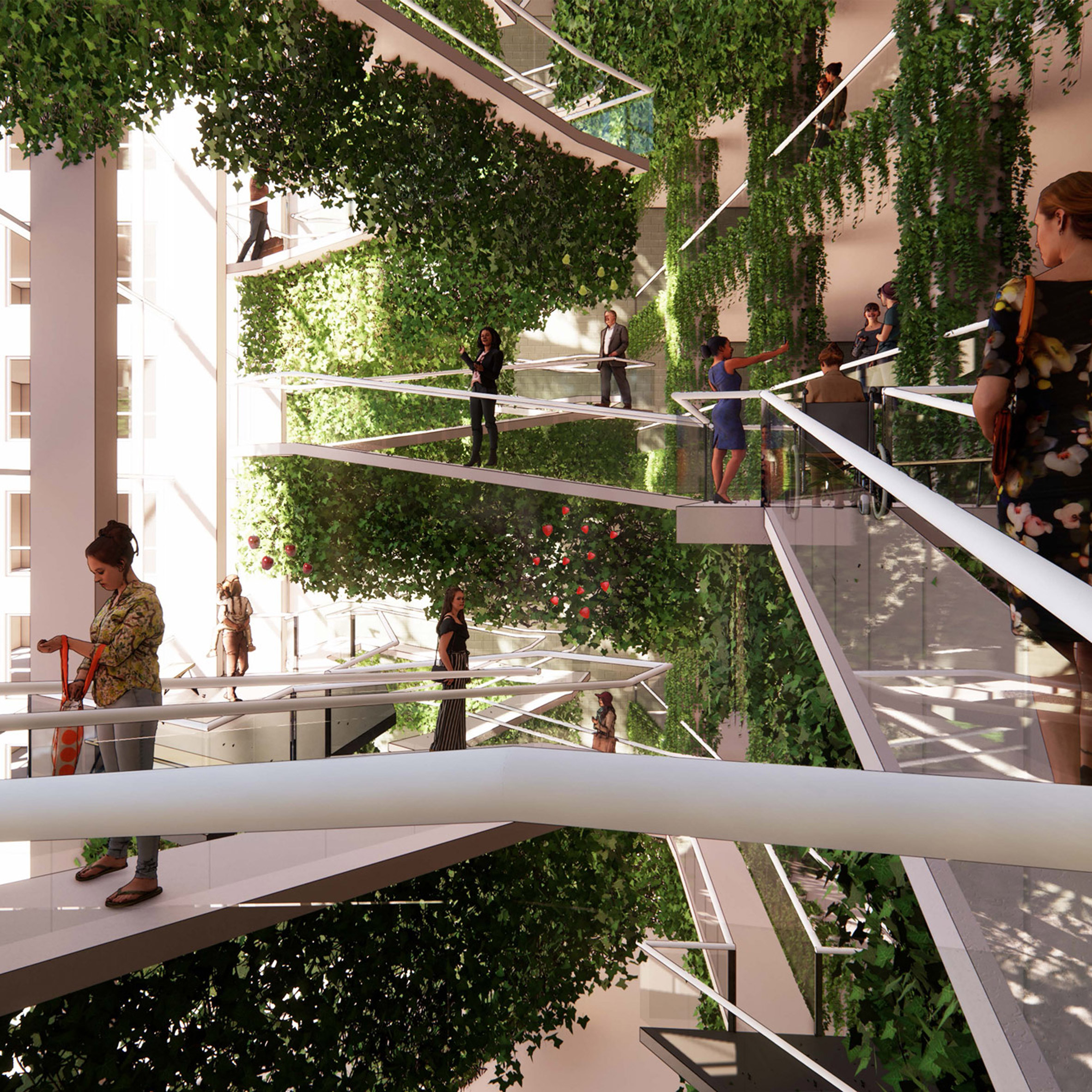 Shreya Anand has suggested converting the structure into a vertical urban farm that uses hydroponic technology. In the design, the walls and platforms of the 20 storey atrium are filled with plants that could provide food for local restaurants.

The top floor of the building is occupied by several dining options promoting a farm to table scheme. 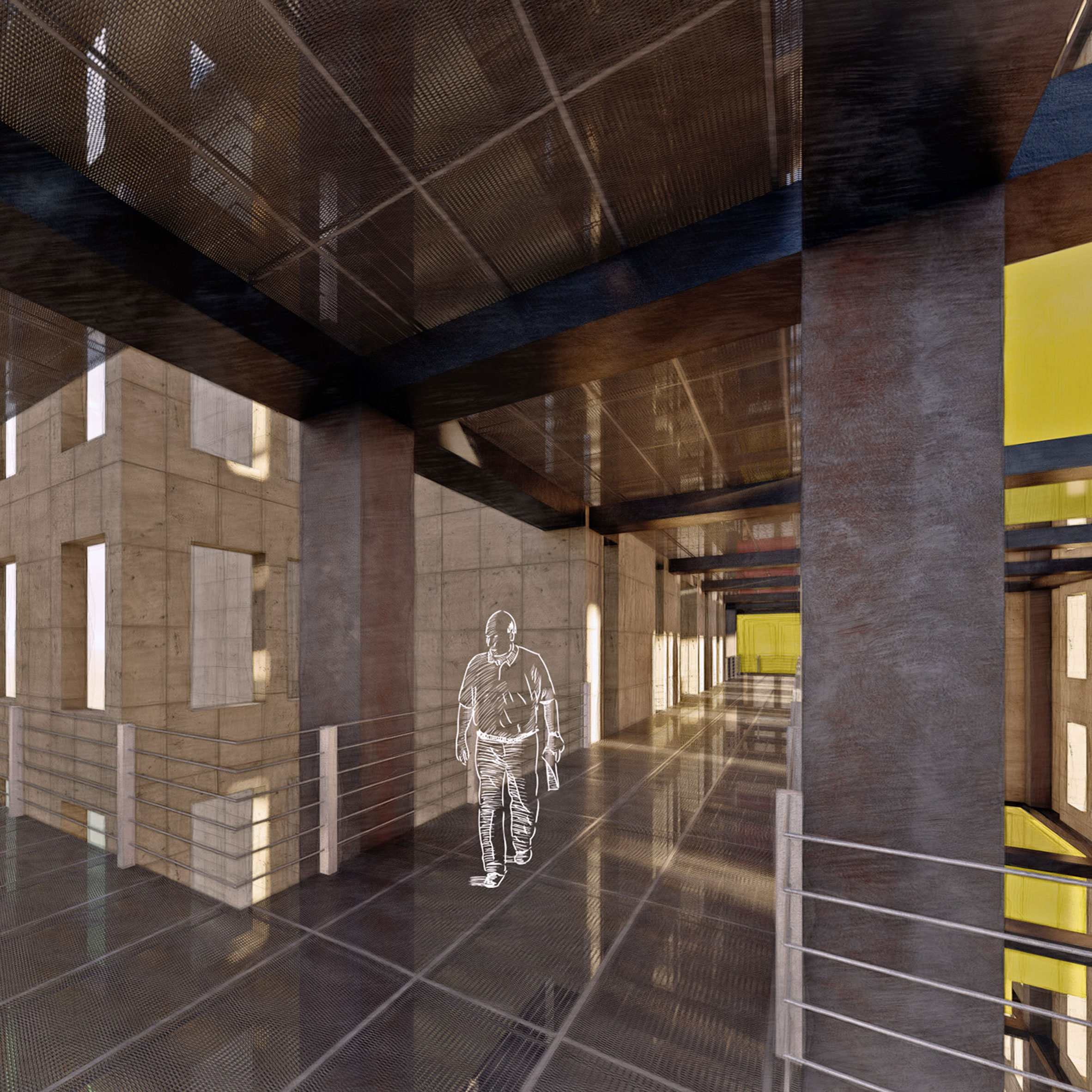 Synaptic City is a biotech and science innovation centre outfitted with laboratories. They can be adapted to research a number of technology-related projects such as wind turbine production, interstellar satellites, artificial intelligence or medicine. 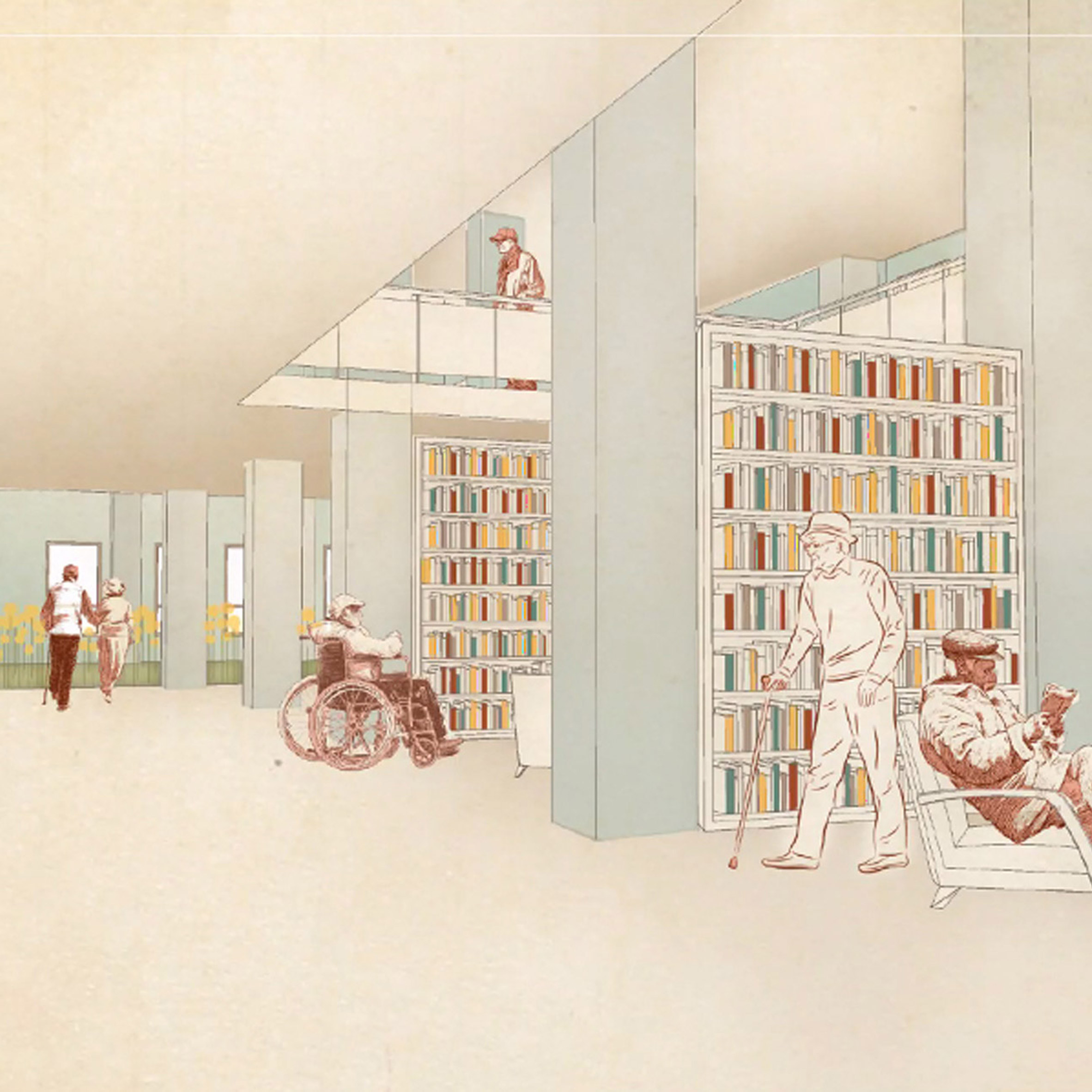 Beyond Years by Rashmi Ravishankar

Beyond Years is a cwith recreational rooms, housing and healthcare resources. The coronavirus outbreak prompted Rashmi Ravishankar to research air quality and its relationship to virus transmission.

Garden spaces inside the building are included as part of the scheme to purify the air and also serve as a therapeutic resource for the residents.

Yiren Mao has imagined what city living could be like following the pandemic. It separates the building into three towers that offer, residential units, offices, retail stores and other community facilities such as a library and outdoor dog park.

The middle portion of the building would house communal resources such as laundry and recreation space, with a co-working tower and living quarters in the adjacent towers. Restaurants, stores and a dog walking trail would occupy the building’s lower levels. 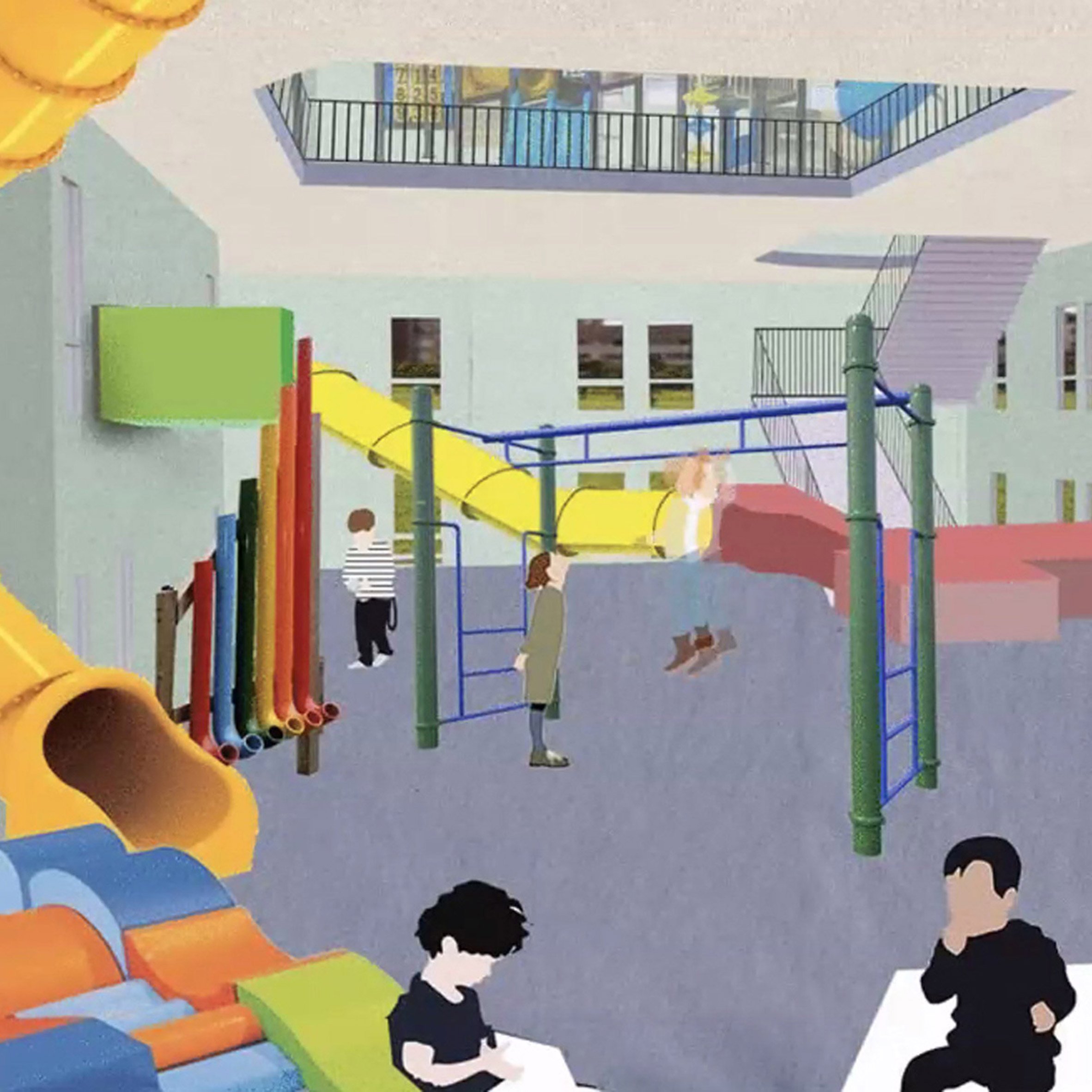 Najib has designed a corporate headquarters for international toy company Hasbro, which is located in Providence.

Features of the colourful interiors include an exploratorium with a domed planetarium, play scapes with twisted slides and other interactive gadgetry that promotes play. 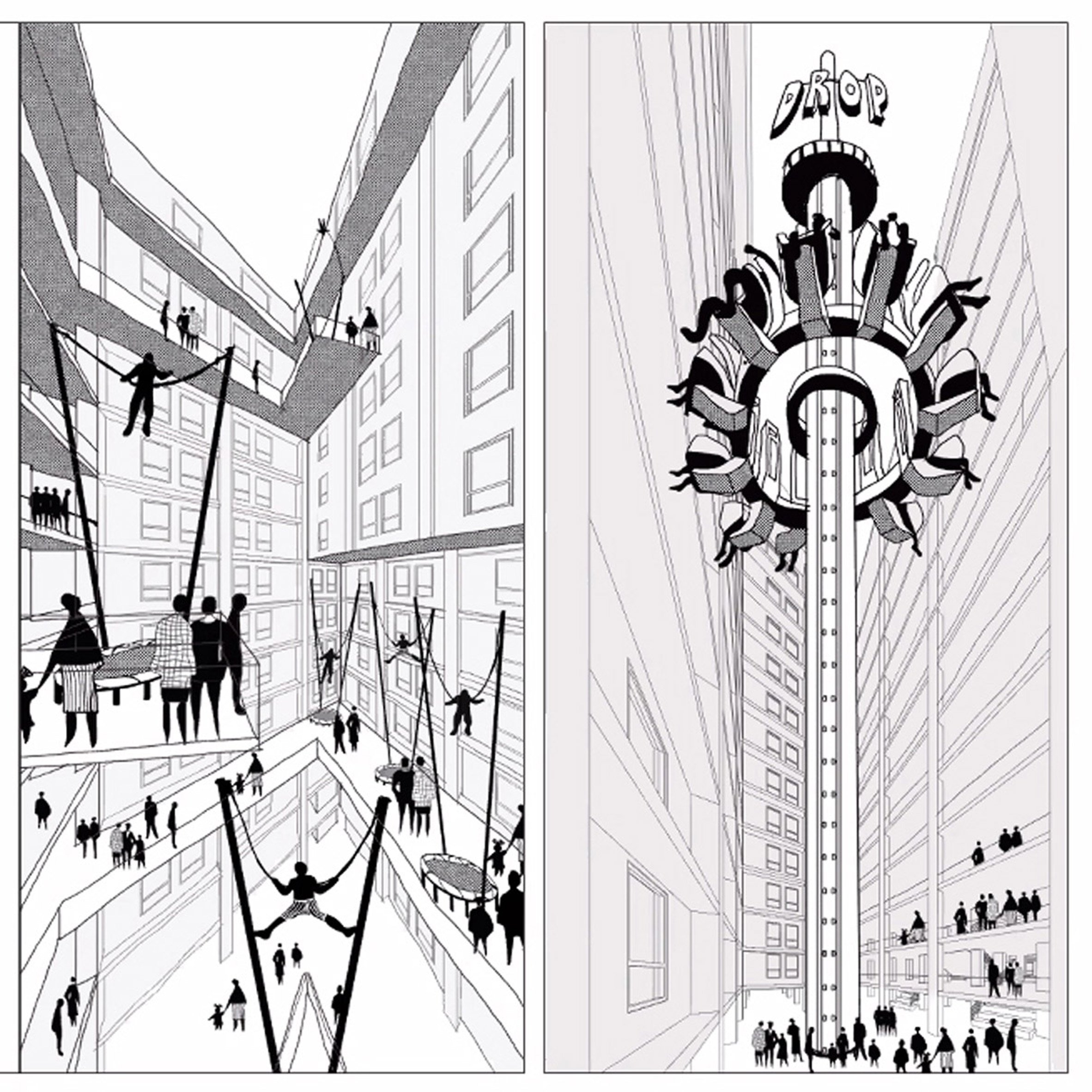 Vertical Thrills transforms the historic building into an amusement park and tourist destination that could earn revenue. It involves opening the space up to install equipment for indoor skydiving, bungee jumping and a massive climbing wall.

In her drawings Hongjia Zhou has mimicked the style of the DC Superman comic strips in an homage to the building and its nickname.