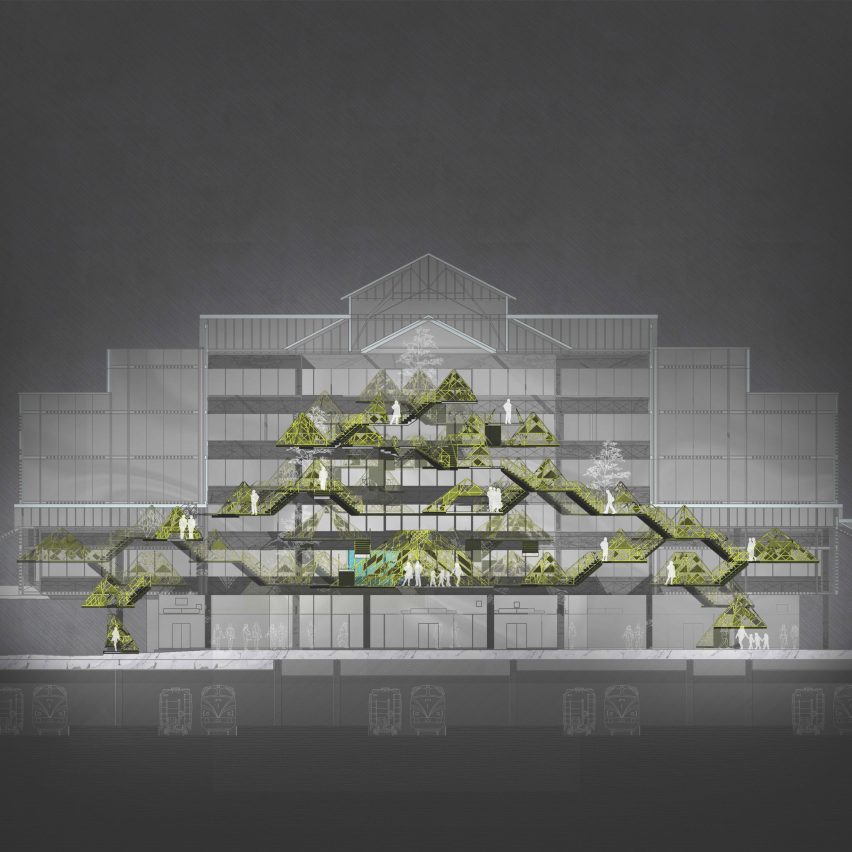 Eight interior architecture and design students from Canterbury School of Architecture present their visions of fictional embassies in dystopian futures in this VDF school show.

The futuristic proposals were conjured up by students in their final year of studies on the BA Interior Architecture and Design course at the school, which forms part of the University for the Creative Arts in Kent, UK.

Students were invited to draw on science fiction and fantasy to develop their schemes, which has given rise to a diverse range of projects that include a space dedicated to the Earth’s restoration and an embassy for spreading propaganda in a virus-ridden world.

“The BA Interior Architecture and Design course at University for the Creative Arts takes a multidisciplinary approach to the transformation of unused and undervalued spaces and places, encouraging the students to embrace traditional means of designing whilst exploring the role of the narrative as means of further unlocking imaginations and designs.

“This year BA Interior Architecture and Design students were asked to design an Embassy, a place for the democratisation of conversations between people and politicians. During their final year of studies, students have formed narratives which draw on real-world models and combine elements of science fiction and fantasy.

“Speculating about our future world, exploring fictional lands and places, to find that some of their fictional elements are now part of our reality. Exploring different narratives in relation to their building, creating bridges among nations or aggravating difficult relations.

“Students were encouraged to reflect on their narratives to inform their selection of site from the Government Property Vacant list. This year’s BA Interior Architecture and Design graduates are our greatest future designers and thinkers with unique values and abilities to contribute to building a new future with meaning.” 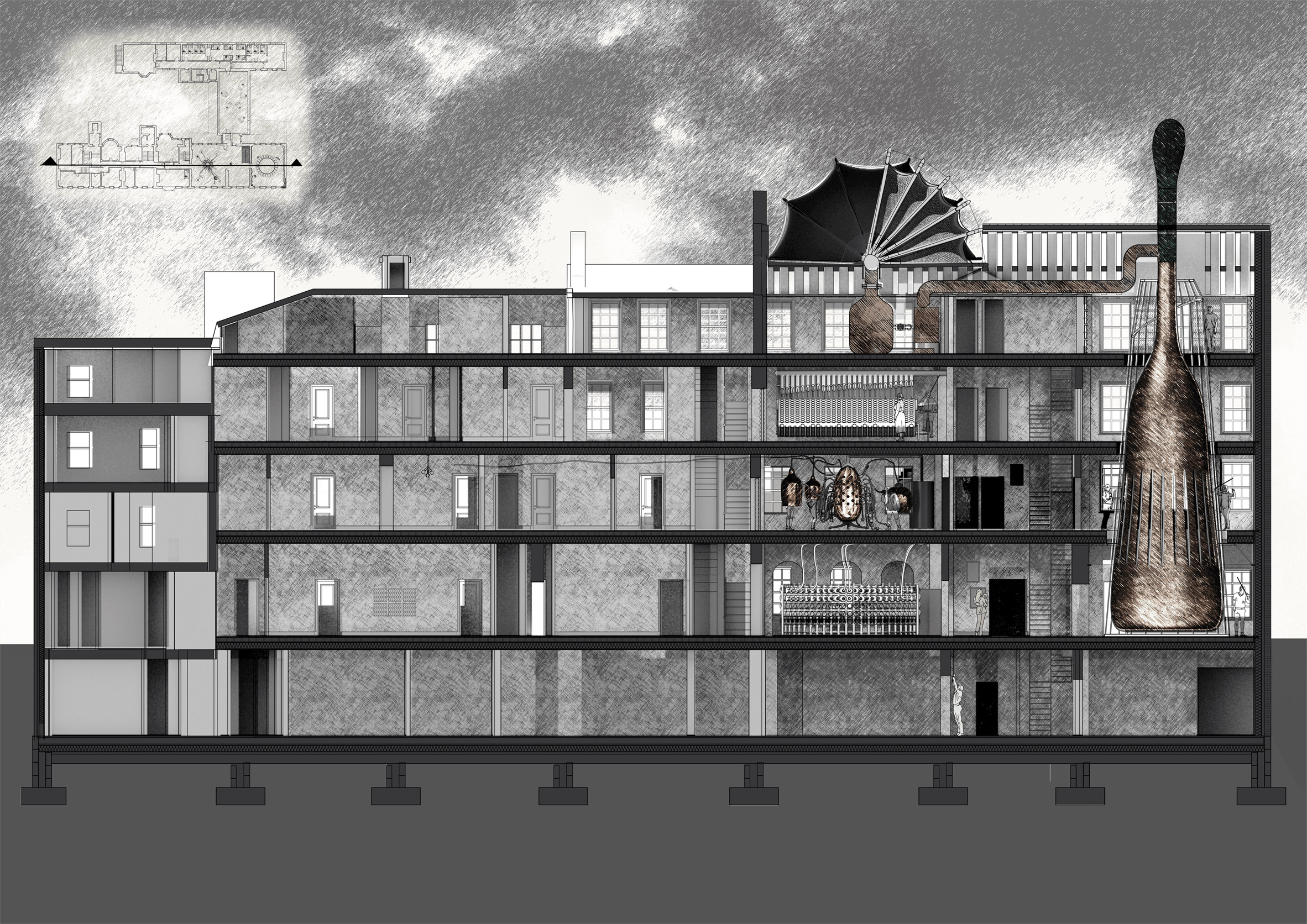 The Embassy of Sound by Alex Elmslie

“The Embassy is located in ‘Periphony Republic’ and was built after their people suffered from a man-made virus called ‘Mutus’. The virus disables the victim’s ability to speak and was made to hush the minorities and the poor, in order to stop them from protesting and rioting.

“As the members of the Embassy were unable to speak, they created a musical code language, that matches specific tones to letters. This code is used in the embassy to communicate, interact and spread propaganda throughout the city, as well as help empower the people to unite against evil.”

“Brutal approaches of animal rights activists triggered an exploration into controversial methods for tackling destructive modern-day lifestyles. Plant-based diets will not be enough to give Earth the opportunity for rejuvenation, action must be taken to control the underlying issue: there are just too many of us.

“A light, airy glass extension encases the proposal, trapping the internal affairs that are not so transparent. Timber cladding and curvature throughout plan and section embody an organic feel. 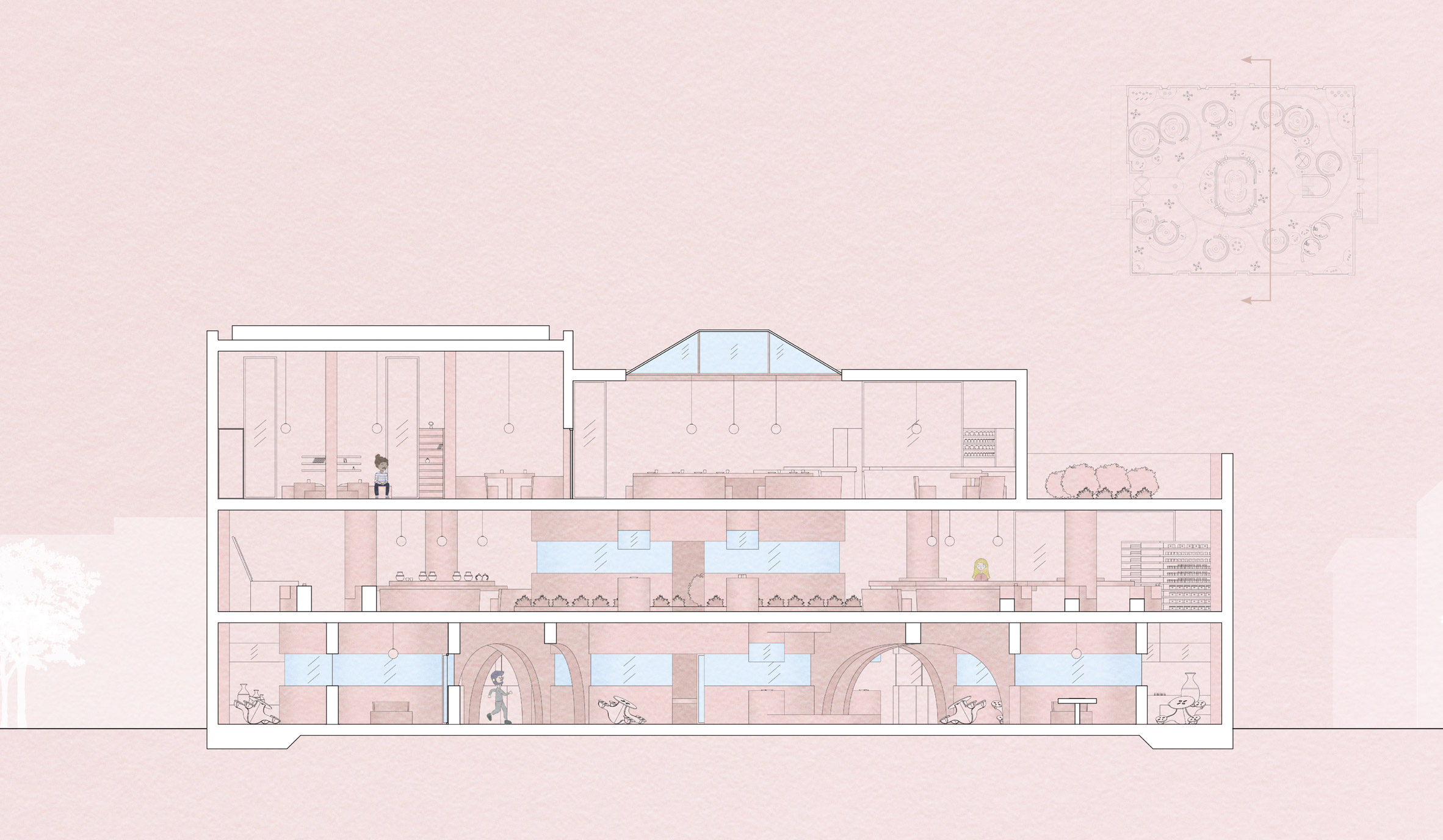 Embassy of Gotland by Katerina Volkova

‘The Embassy of Gotland is a project that expands the concept of an embassy by creating an imaginary country, Gotland, and exploring how it could be represented in a foreign land.

“The narrative takes place in 2030. The world is in fear as its natural recourses are becoming sparser every day. However, the citizens of Gotland, a newly formed country, found a way of sustaining the country with the limited resources it has. Minimising the use of electricity, they rely on farming, alternative energy sources and handcraft.

“Gotland’s embassies around the world host interviews with people who would like to join. The Embassy selects the ones who seem dedicated enough to change their lifestyles, and then invites them to live at the embassy to acquire the skills necessary for life in Gotland.”

“The main goal of the embassy is to introduce a sample of Gotland’s culture in the heart of another civilisation. With the help of lectures, educational workshops and gathering in communal areas, the embassy rallies people to Gotland’s ethos.

“The main feature of the embassy is the National Hotel. The pod-like rooms offer an identical, functional and simple design that is reflective of the country’s ideology on sustainability.

“The project inspires to bring communities together to make a positive impact on our environment and thrives on creating a strong and respectful relationship with our natural habitat and to protect our biosphere.” 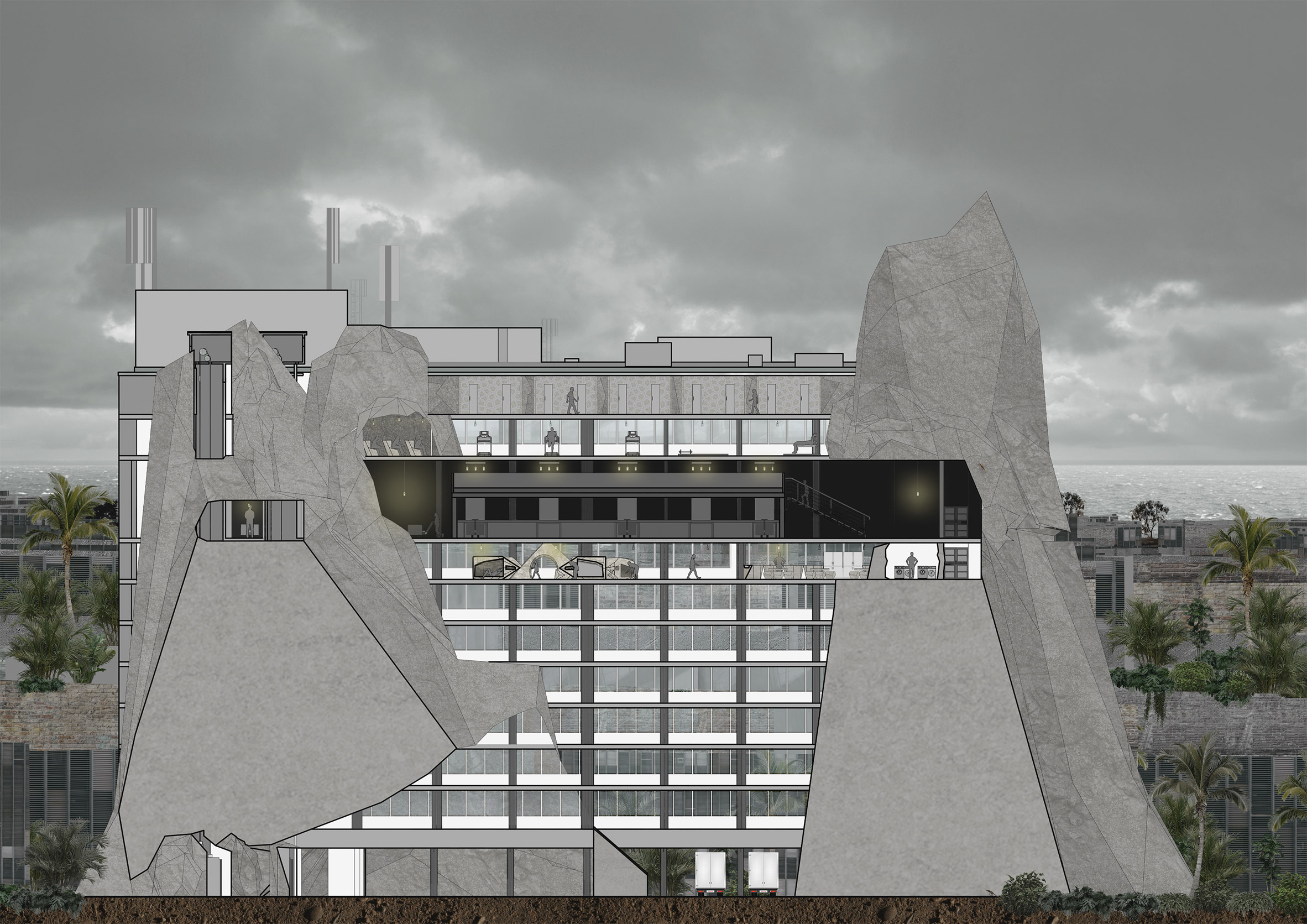 “This design features a job recruitment centre set in a dystopian version of 2030, where global warming has caused extreme sea-level rise and a viral pandemic contracted from lizards.

“The recruitment process aims to mine and salvage any essential supplies found within the limestone that lay beneath the country of Waterland, which is then distributed to families in need.

“My concept involved the process of treating my collages as viruses that invaded the site, to see how my programme could respond. This developed into the insertion of mined limestone, creating tunnel-moments and small caves that housed parts of my programme.”

“The proposal for my embassy is informed by Ille Artificium Nos Fiducia (In Craft We Trust) and addresses the artisan’s skills such as weaving, forging and soldering which are in danger of being lost as demand for them falls in our digital age.

“The site for the embassy is located within Western Heights, Dover. The embassy offers a space for carefully selected apprentices to undergo a strict seven-year training to master the endangered crafts. The narrative reveals that behind the veil of safety and brotherhood are dark secrets, sacred rituals and mind control.” 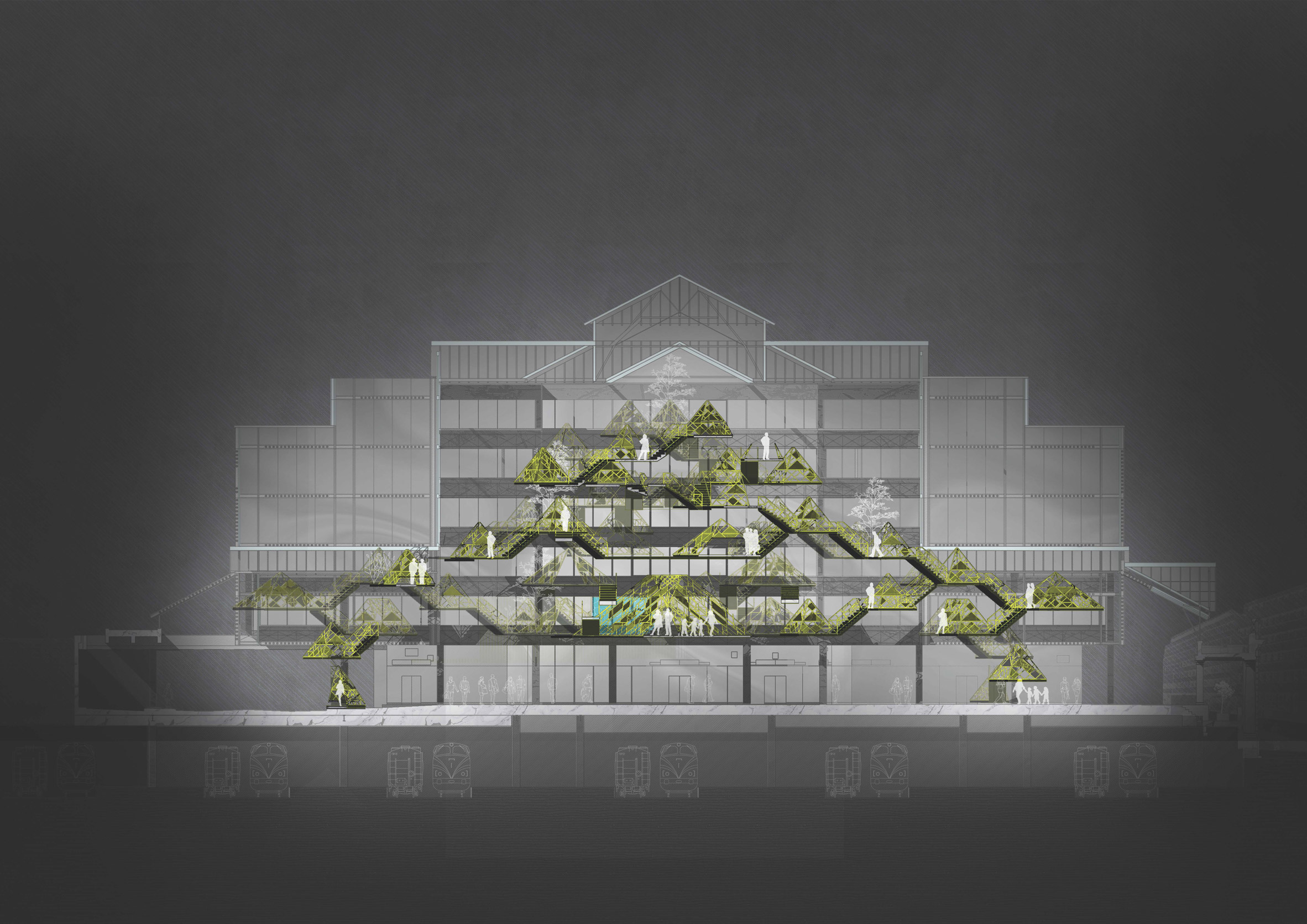 The Embassy of Waterland by Nilofur Benjamin

“The Embassy is a multi-storey Orwellian maze designed to provide a false sense of privacy. The structure is made up of several pockets cladded in solar mirrors to make use of the natural sunlight within the courtyard of the existing building. 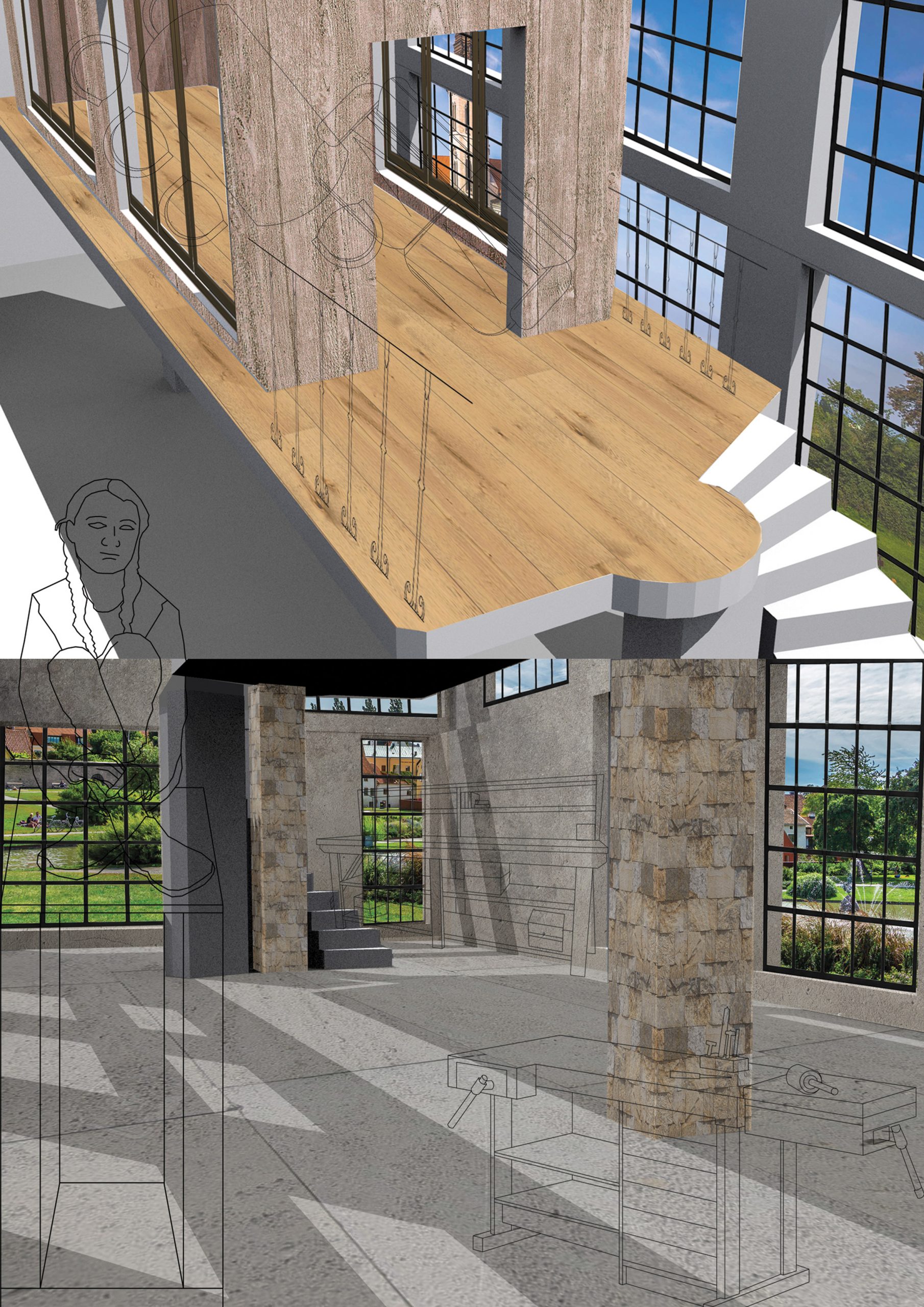 Ministry of Trials by Tania Tatarenko

“Gotland’s embassy Ministry of Trials offers a space for education on earth restoration. An examination process is designed to assess a candidate’s ability to contribute to the natural habitat of Gotland, which determinates their entry to the country.

“Greta Thunberg’s acts as the ambassador and invites participants to visit the embassy where selected candidates are tasked to create and improve areas in Gotland.”

Virtual Design Festival’s student and schools initiative offers a simple and affordable platform for student and graduate groups to present their work during the coronavirus pandemic. Click here for more details.