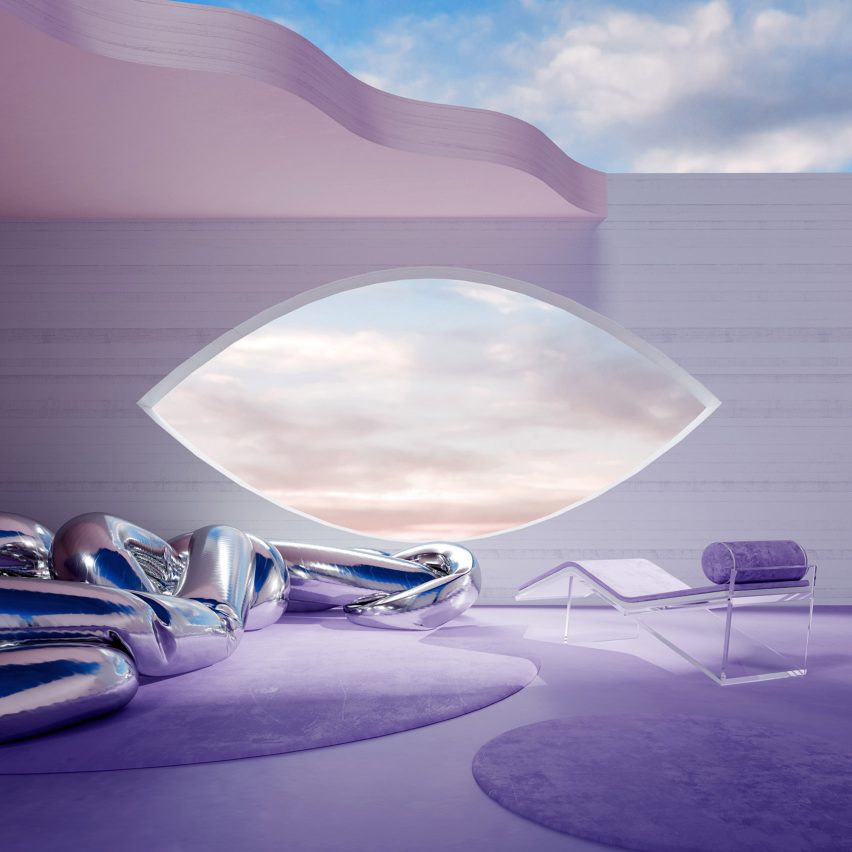 With coronavirus confining people to their homes and rising fears over environmental destruction, a new breed of visual artists is creating utopian landscapes, buildings and interiors for armchair escapists. Here are nine of the best practitioners.

Renderings depicting ethereal seaside homes to surreal, pastel-hued dreamscapes have become popular in recent months as people in lockdown seek to be transported beyond their own four walls.

“Given the global situation, the desire for escapism is at an all-time high,” added interior designer and creative director Charlotte Taylor, who collaborates with a roster of 3D artists to realise imaginary spaces.

“These utopian and fictional spaces feed into people’s imaginations and appetite for a change of scenery, be it completely impossible or not.”

Make-believe landscapes are also creeping into the world of product styling, which has long relied on digital trickery to fake the real world but is now turning towards escapism.

Taylor was one of the artists invited to collaborate with young designers as part of Offsite Online, a virtual design fair organised by New York design magazine Sight Unseen that collaborated with Virtual Design Festival this spring.

Since many of the designers could not fabricate and photograph their objects in real life, Sight Unseen paired them with visualisers to create digital photoshoots.

“People really kind of took it to the next level and some of them created these fantasy spaces,” said Sight Unseen’s Monica Khemsurov in a live interview with Virtual Design Festival.

Read on to see unworldly renderings by Taylor and eight other creatives: 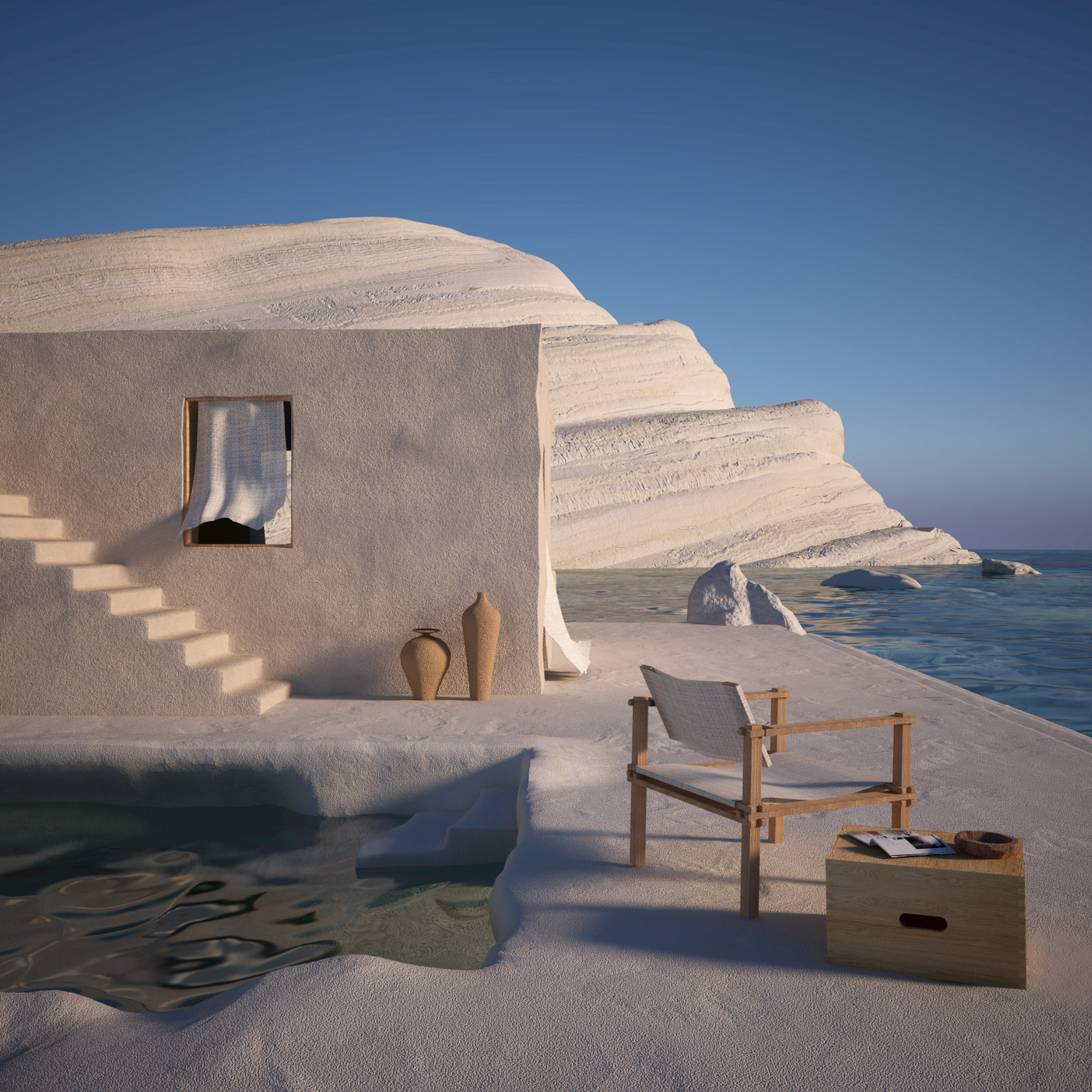 This rendering, which Charlotte Taylor created in collaboration with Riccardo Fornoni of Cream Atelier, depicts a fictional oceanside home called Villa Saraceni that seems to be carved out of chalky white stone.

Summery details like ceramic pots, billowing curtains and a sun-lounging chair have been included throughout. Taylor, who is based in London, says her work often has “solid roots in reality”.

“A lot of my references and initial sketches are interpretations of existing spaces, places and details in the built environment,” she explained.

“Furniture and objects also play into this limbo between the concrete and the fictional, down to the details of a lit cigarette and newspaper open on the crossword.” 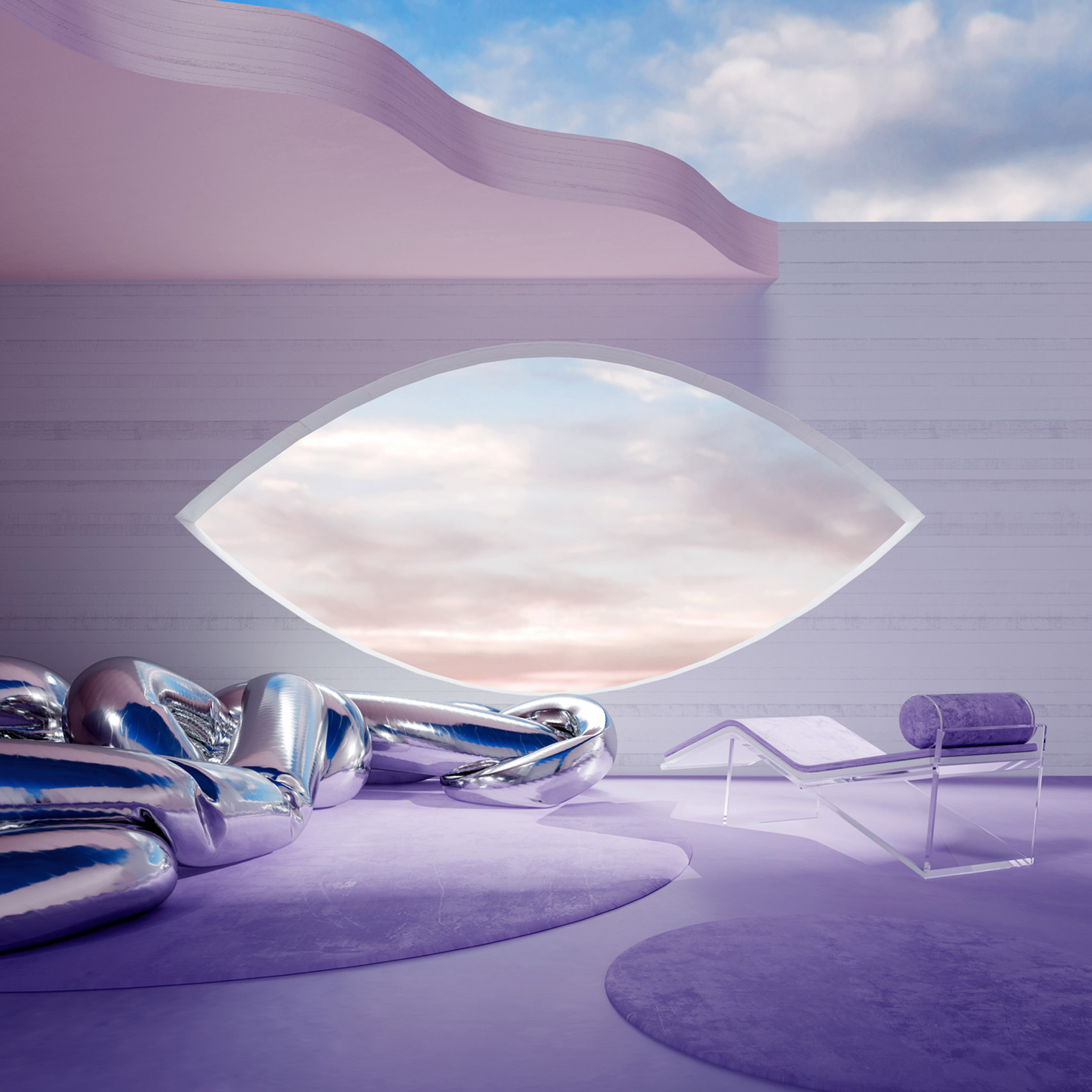 Cloudy skies can be seen through an eye-shaped portal in this whimsical lilac room drawn-up by Reisinger Studio. A glass chaise longue features on one side of the space, while on the other is a strange tangle of silver tubes.

“I wanted to make the space dreamy, as the purpose of the project was to take the audience to a specific state of mind, a place where emotions are a priority,” said the studio’s founder, Andres Reisinger.

Sometimes Reisinger’s ideas go beyond renderings – at the end of last year, he used 20,000 fabric petals to make a real version of his Hortensia Chair, which started out life as a CGI image. 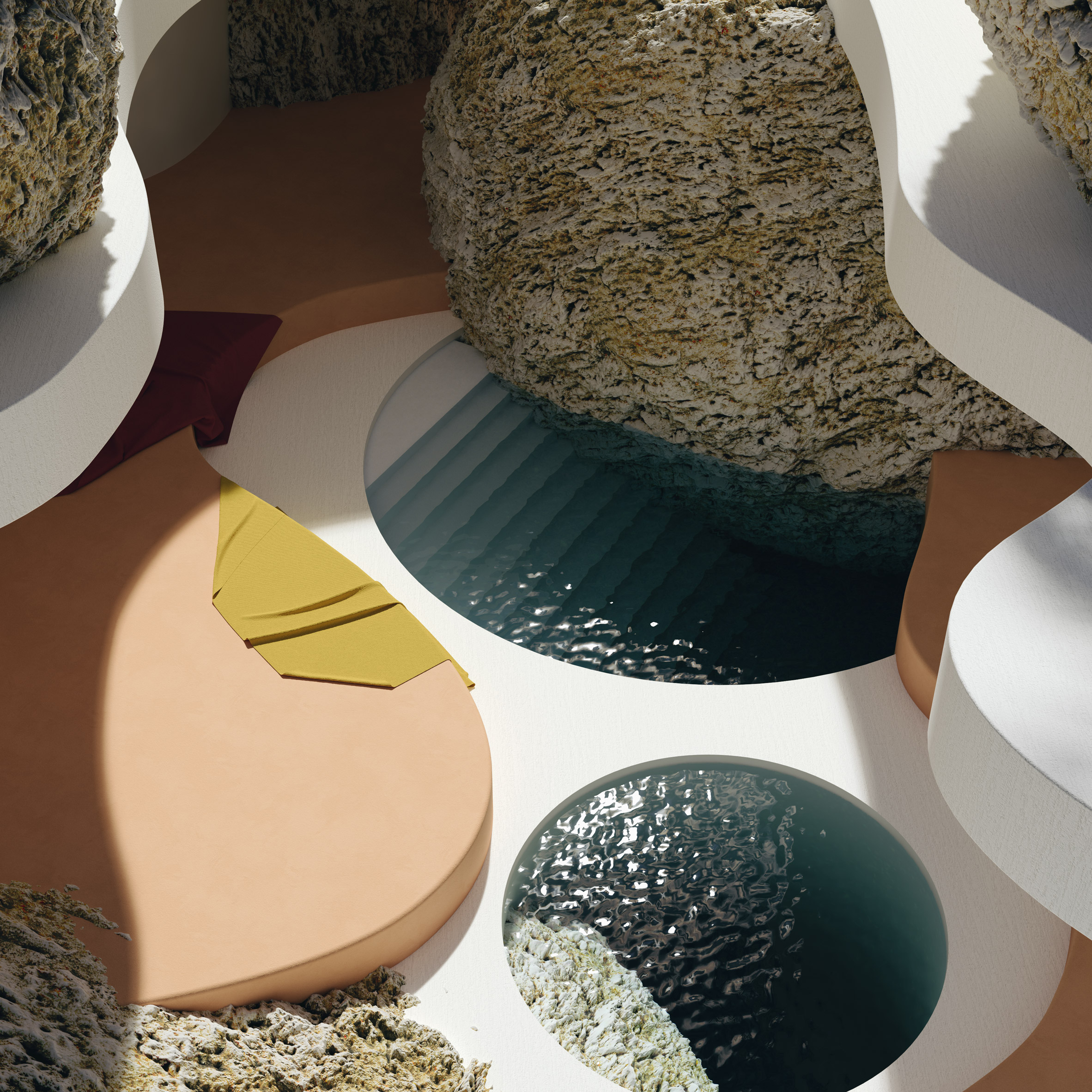 Christodoulou says his interest in 3D design grew from playing video games as a child. When he started creating his own imagery five years ago, he wanted to carve out a more sophisticated aesthetic.

“It is really just an extension of the need to see something more modern and refined rather than the same old fantasy and sci-fi worlds being built at the time.” 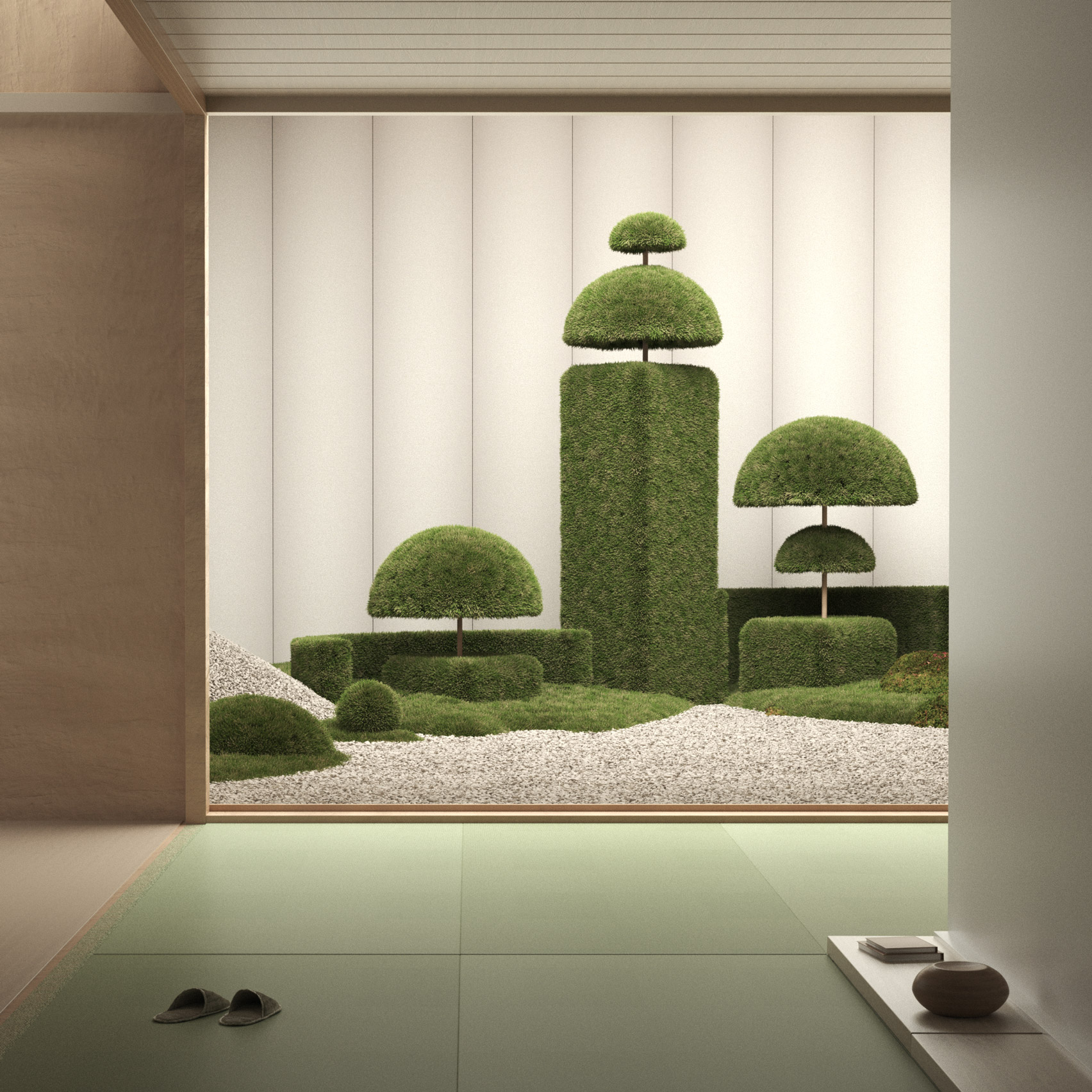 The studio – which describes its aesthetic as “minimalist, utopian and sometimes provocative” – says the image was informed by its long-term admiration of Japanese culture.

“We wanted to use this external point of view to create our own reinterpretation, mixing and using all references we have been collecting during these years,” said Ezequiel Pini, the studio’s director.

“The result was a collection of pleasant spaces and harmonic gardens working together as an invitation to relax and meditate.” 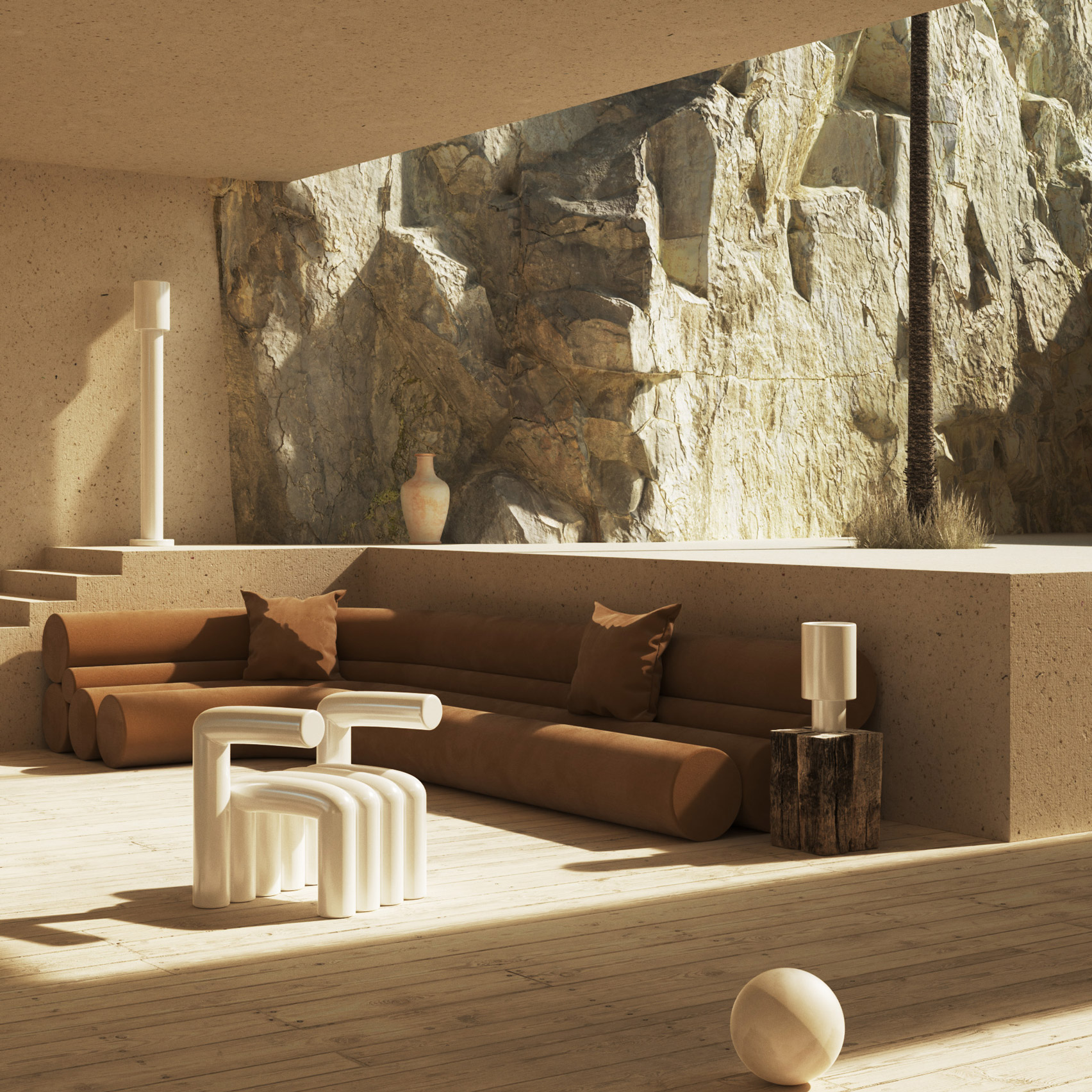 A jagged rock face is the backdrop of this striking living room envisioned by Montreal-based designer Stefano Giacomello.

Furnishings in the room, like the caramel-brown sofa and tubular armchair, are meant to look as if their cast in intense desert sunlight.

“I think my style or my aesthetic is still a work in progress, and probably always will be, but I try to keep things simple and minimalistic,” he told Dezeen. 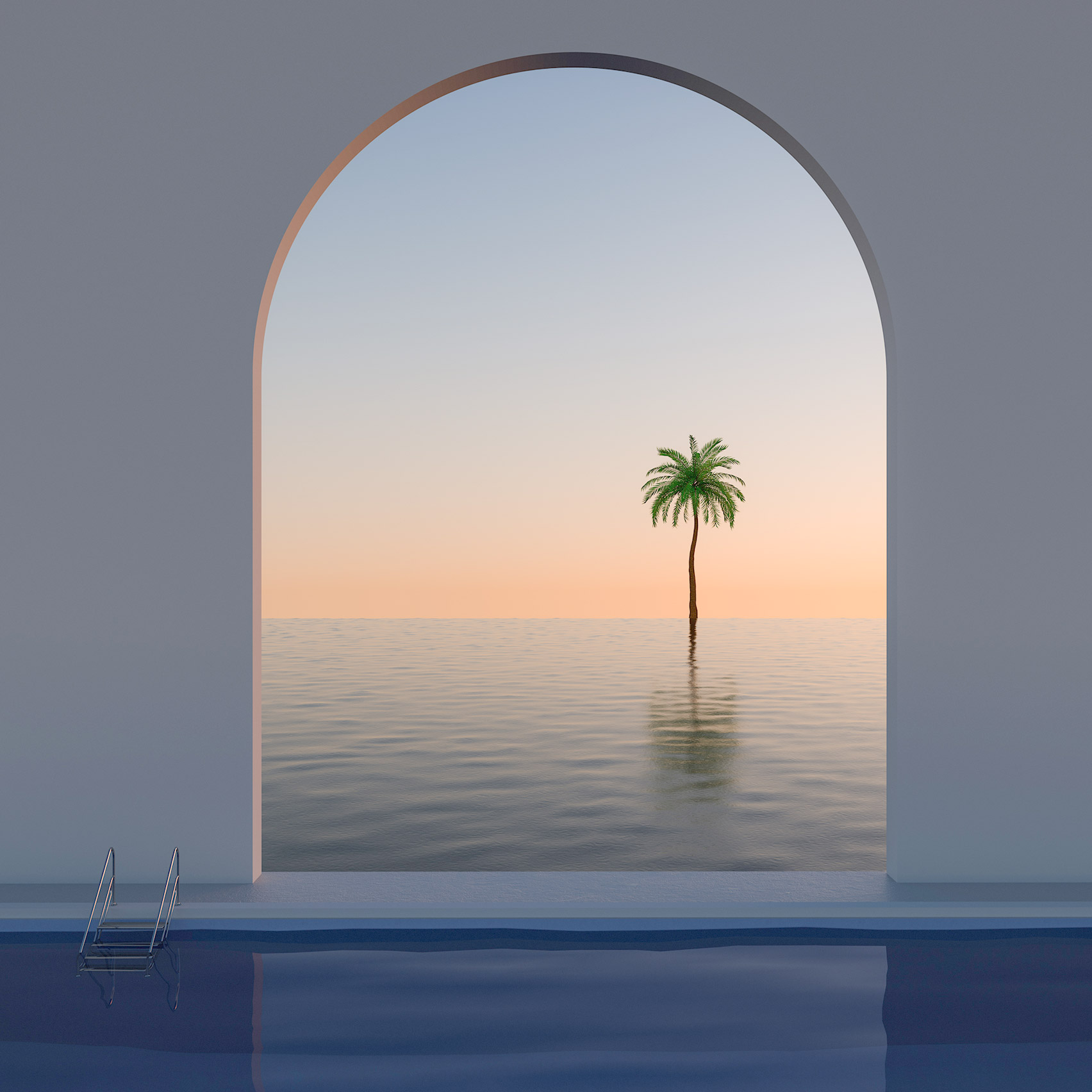 Artists Minjin Kang and Mijoo Kim head up New York-based Mue Studio. This rendering comes as part of the studio’s Somewhere in the World series, which encourages people to imagine idyllic spots that may – or may not – exist across the globe.

In the image, a huge arched opening beside a swimming pool looks out across the ocean towards a singular palm tree.

“The idea of peace, calm, and comfort is what we want to express through our work, and our claim stays the same in regard to the current issues,” the pair told Dezeen.

“Everyone seems to be connected through the digital world packed with strong images – thus we hope to create a rest stop for people, by combining escapism with everyday feelings.” 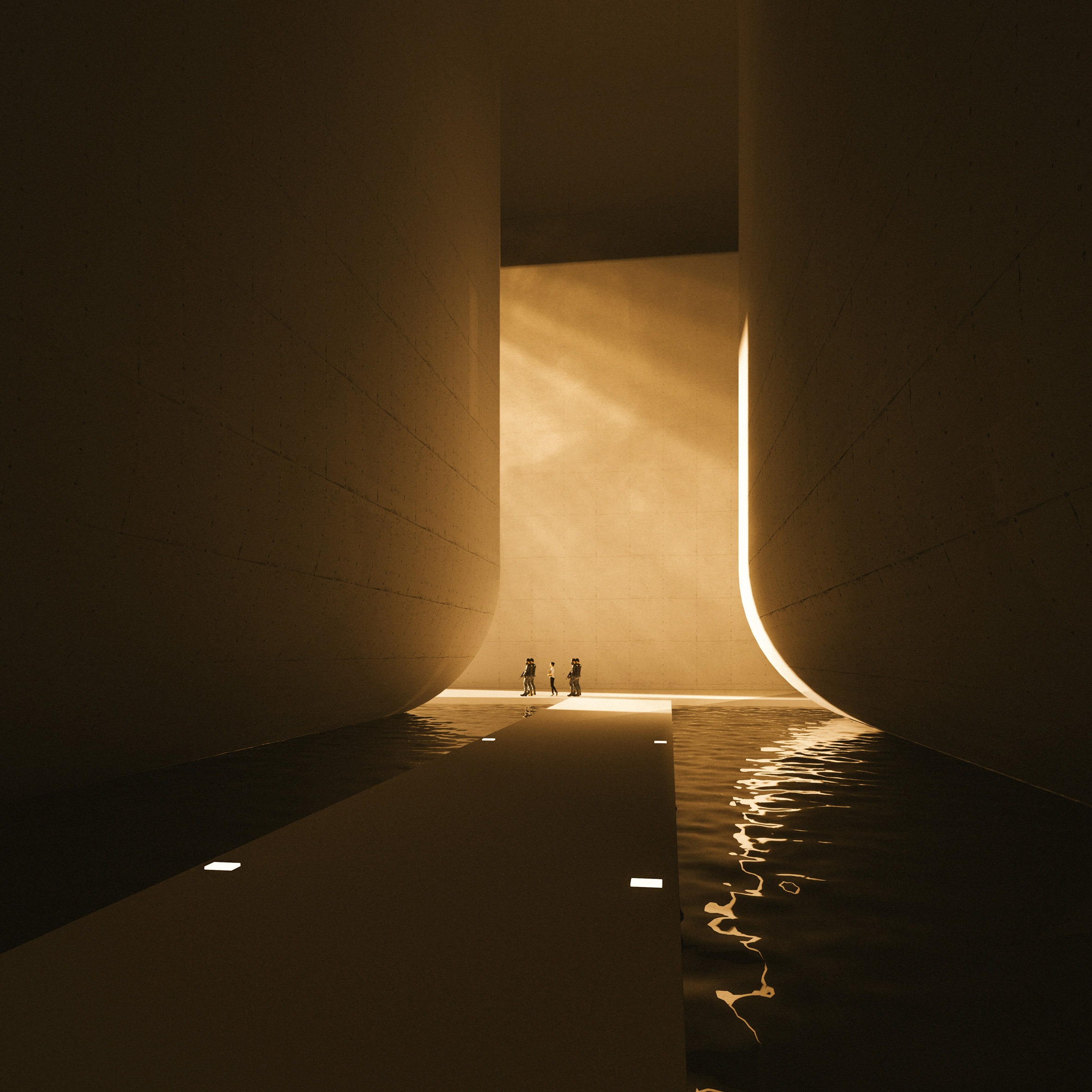 While this particular piece of work takes cues from cinema, Weng told Dezeen that he often “plagiarises scenes I see in my dreams”.

“I believe that reality is your perception,” he said. “To me, what matters is the audience’s own perception. I don’t want to give too much input to ruin their imagination.”

“Putting a sticker next to artwork and deeply explaining about the thought and concept is something I am generally against.” 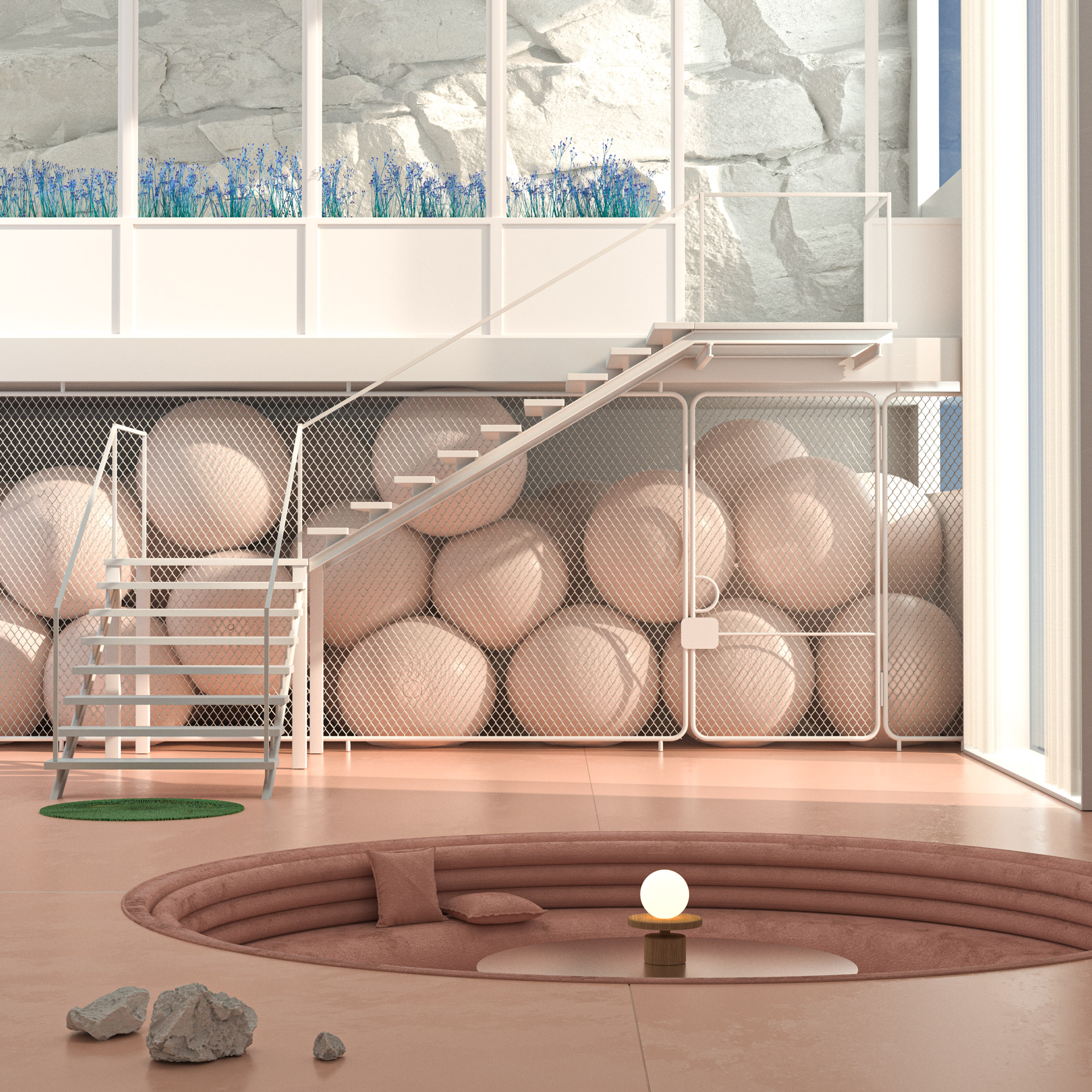 A cage filled with squishy, oversized balls and sunken-blush pink sofa feature in Paul Milinski‘s whimsical rendering titled Work Party, which is meant to capture the “infectious high-spirits” that surface at the end of the year.

Melbourne-based Milinski, who is creative director of design agency Vaulter, says he sets out to create worlds that are “surreal but not entirely unattainable”.

“They are designed to transport you along pathways that illustrate inspiration for a potential future and offer a chance to wonder and escape.” 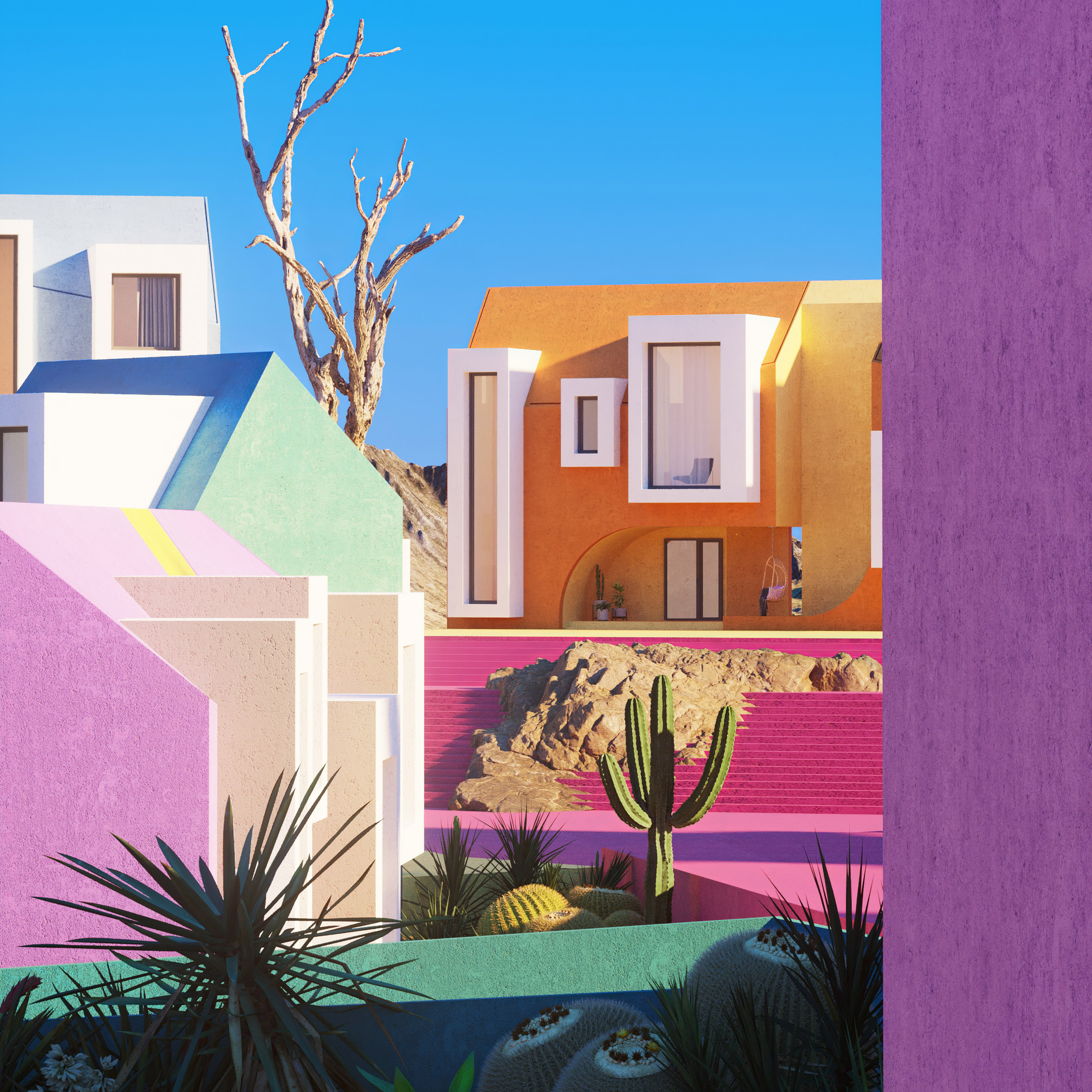 Blue skies, spiky cacti and brightly-hued geometric buildings that nod to the architecture of Riccardo Bofill and Luis Barragan feature in this rendering by Russia-based creative duo Mary and Davit Jilavyan.

It’s part of the pair’s Sonora Art Village project, a series of vivid images depicting an imaginary community of homes in Mexico that are “far from grey reality”.

“We were very tired of this situation with the pandemic, we wanted to create something bright, simple and fresh,” they told Dezeen.

“It’s quite hard to describe [our aesthetic] in a couple of words, but mostly all we create is a reflection of our sentiments and feelings.”

The post "The desire for escapism is at an all-time high" say visualisers creating fantasy renderings appeared first on Dezeen.