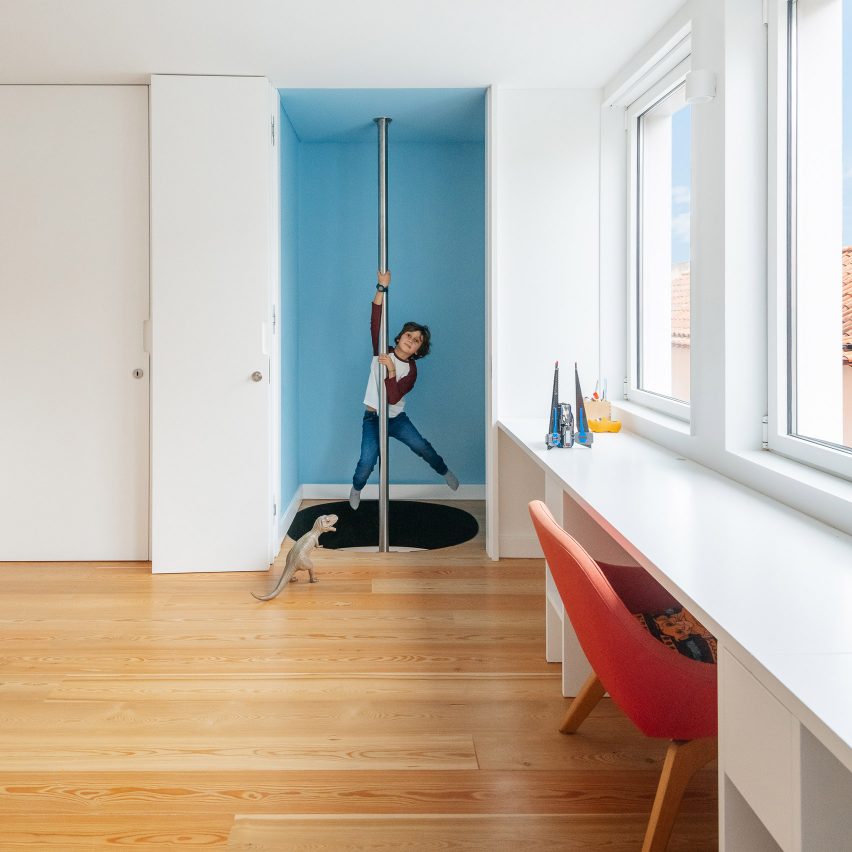 A fireman’s pole lets children slide down between floors in this house that Aurora Arquitectos has created in Lisbon, Portugal.

The building that the house occupies is nestled along Bartolomeu Dias street, west of central Lisbon. 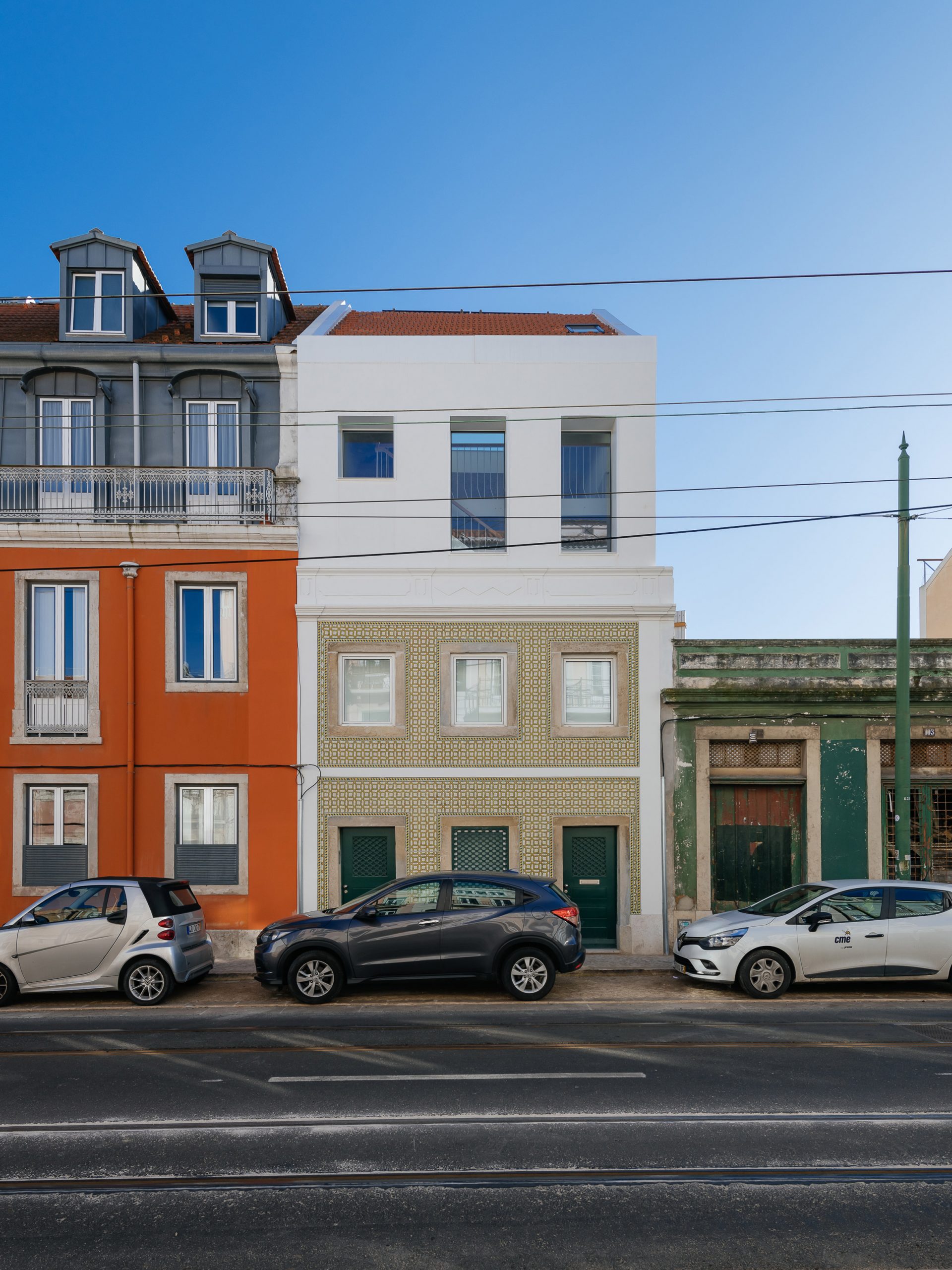 Although the structure had fallen into a state of almost complete ruin, it was purchased by a couple who wanted to establish a home where they could live for the foreseeable future and raise their three young children.

Aurora Arquitectos was tasked with carrying out the residential conversion. 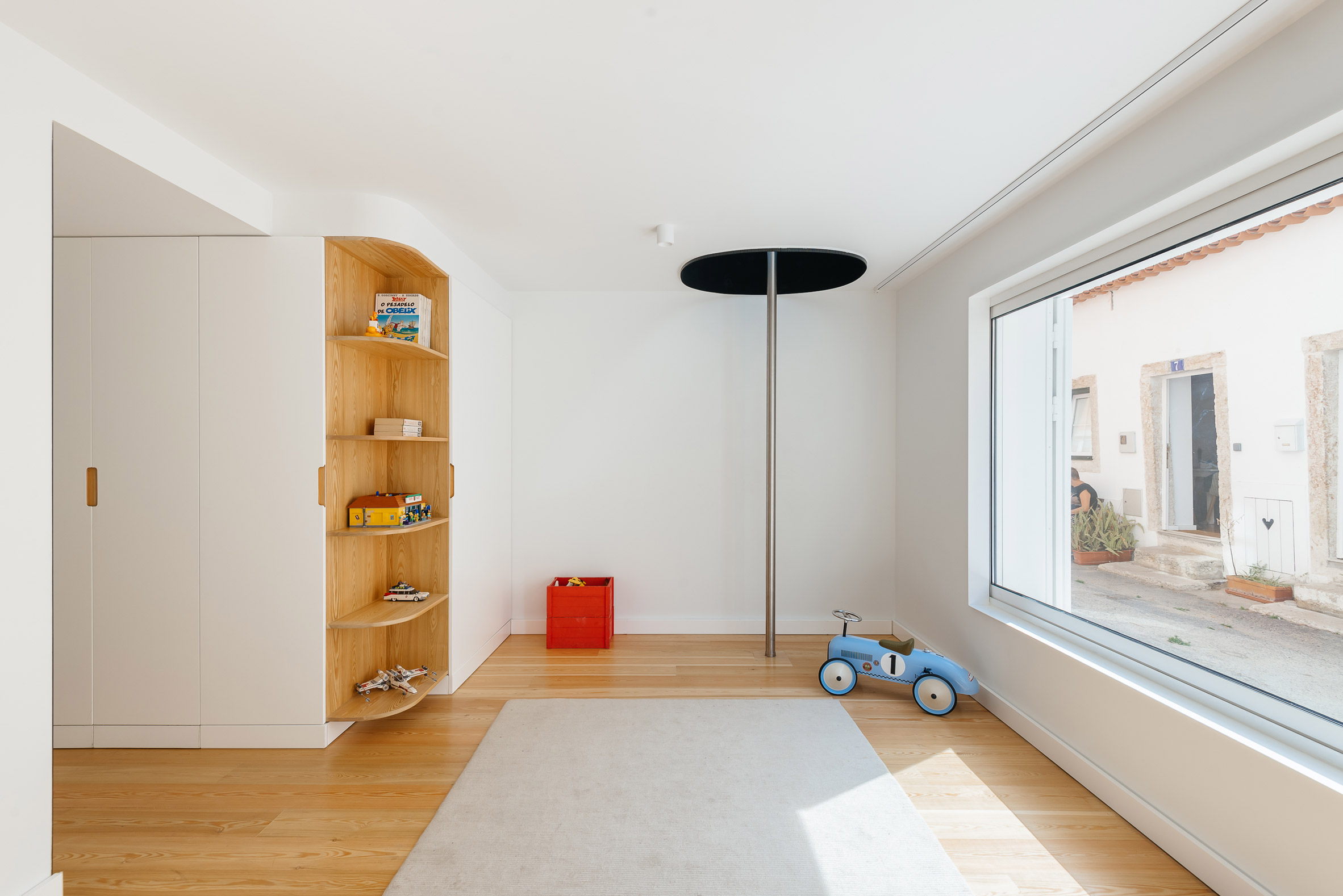 “This is an upstream project in a time when the city has been gradually emptied from its inhabitants under the pressure of tourism and real estate speculation,” said the practice.

“This is a project of resistance since it grows from the desire of a family wanting to remain in its own neighbourhood.” 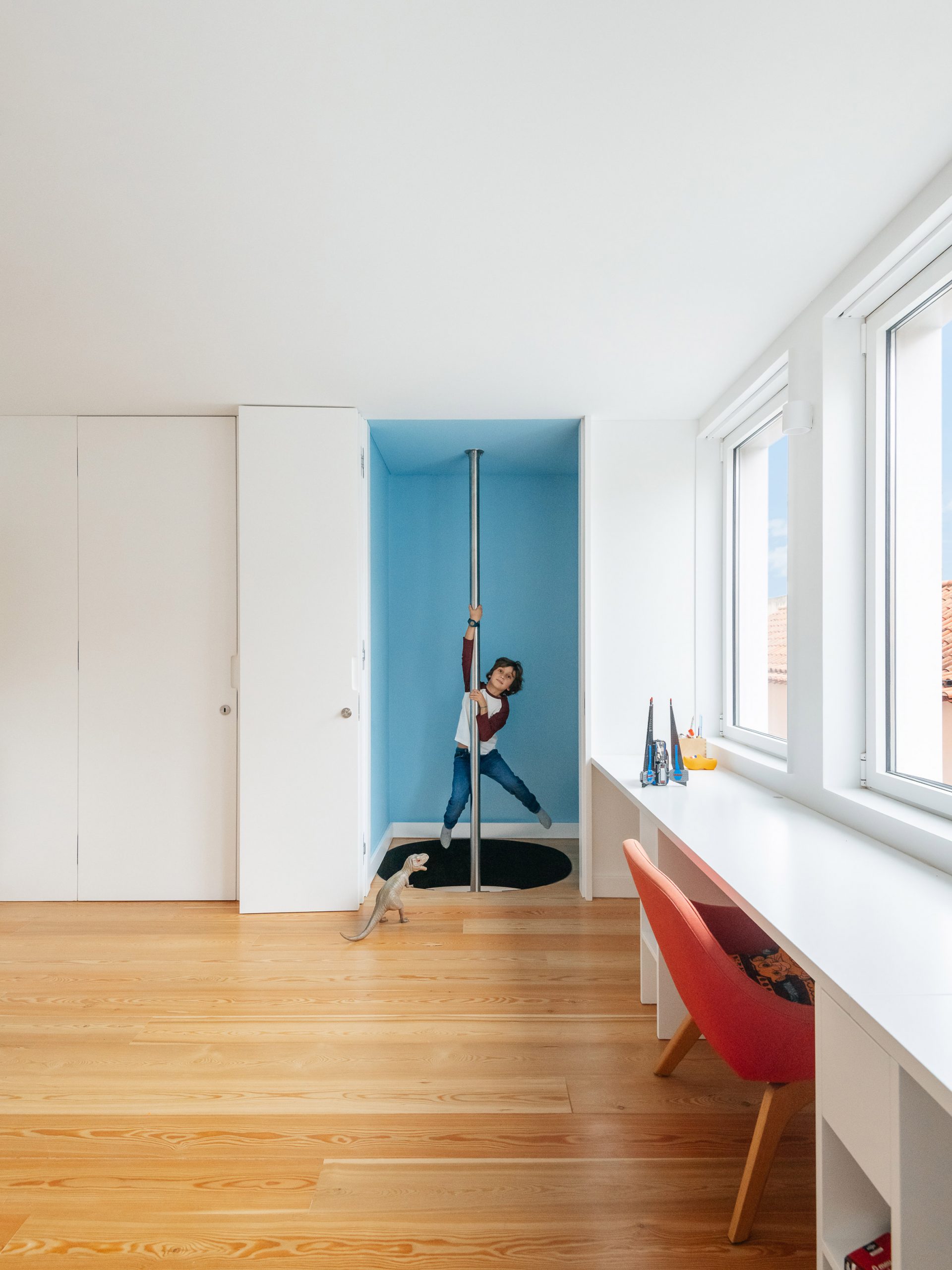 As Aurora Arquitectos had to reconstruct nearly the entire building, it decided to extend the structure to create three more storeys and an extra 169 square metres of space.

The new portion of the building has been painted bright white. 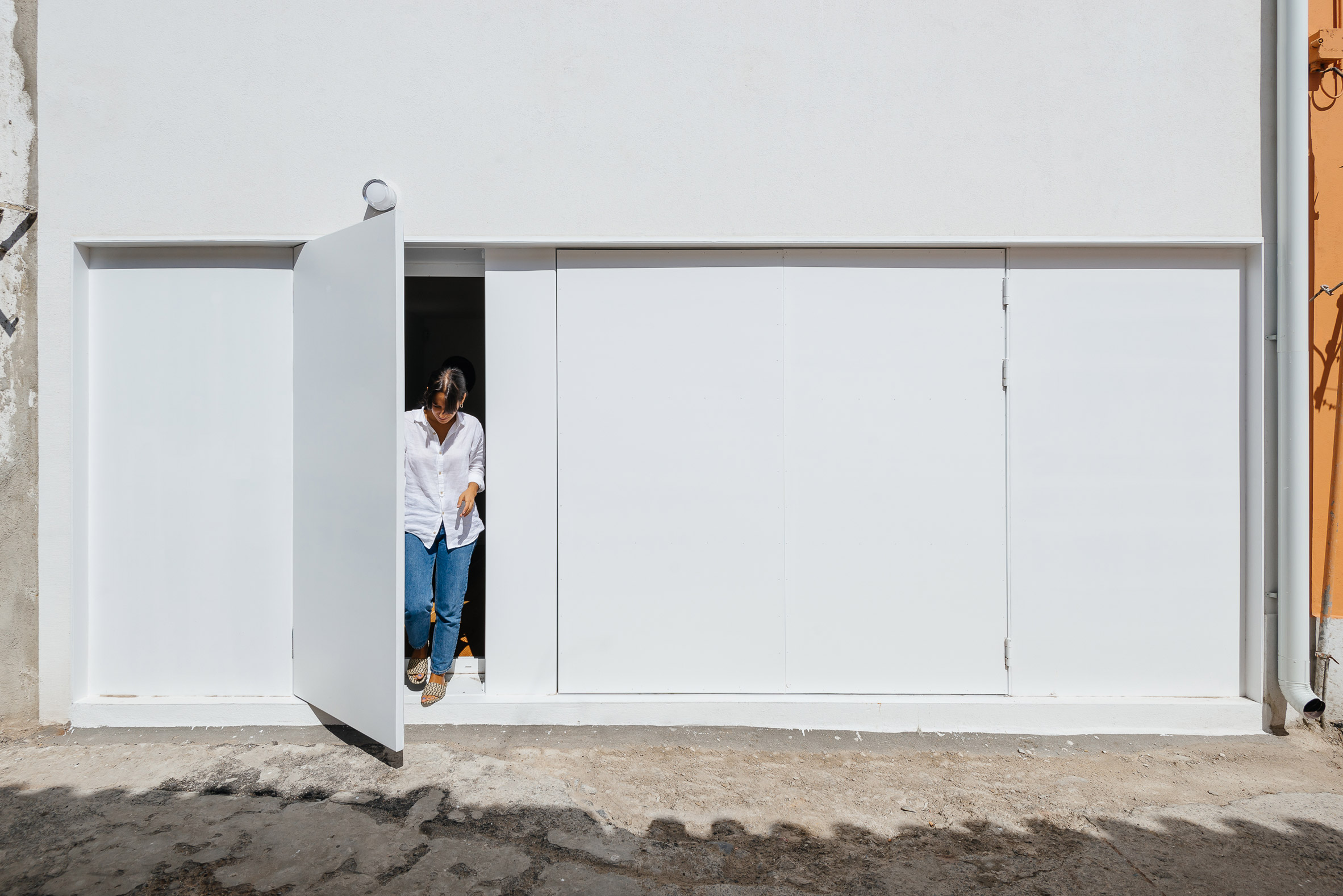 “The family lived for some years in the Netherlands in a typical townhouse, known as a typology that has a vertical distribution of the program, so we can also say that influenced the design process,” the practice explained to Dezeen.

Inside, the traditional arrangement of rooms has been reversed. The sleeping quarters are on the bottom two floors, while the communal living spaces have been spread across the upper three floors to benefit from views of the nearby Tejo river. 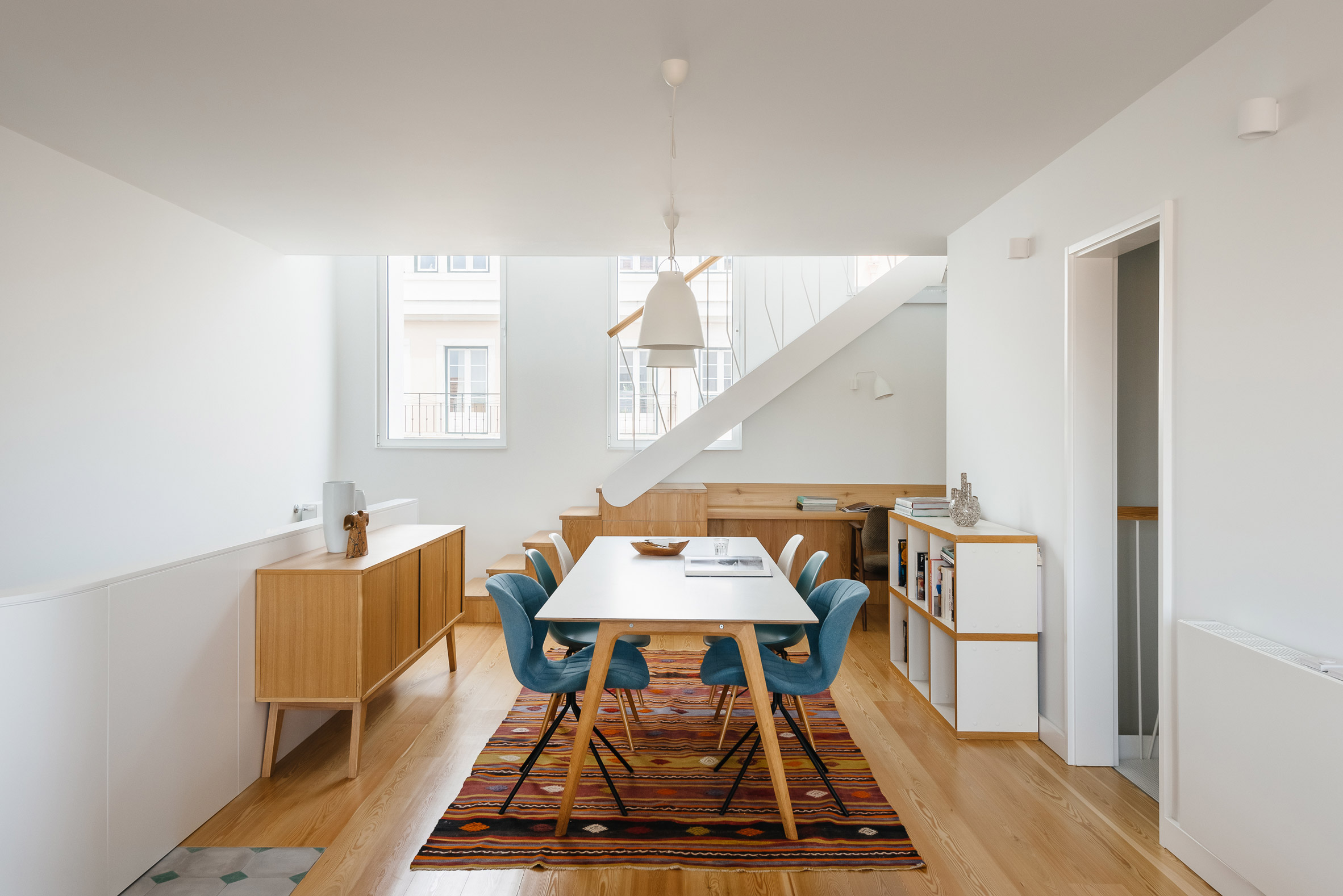 This excludes the playroom that has been situated at the rear of the ground floor, complete with curving in-built shelves where the kids can display their toys.

The room can be reached via a fireman’s pole that extends from the kid’s bedroom directly above. 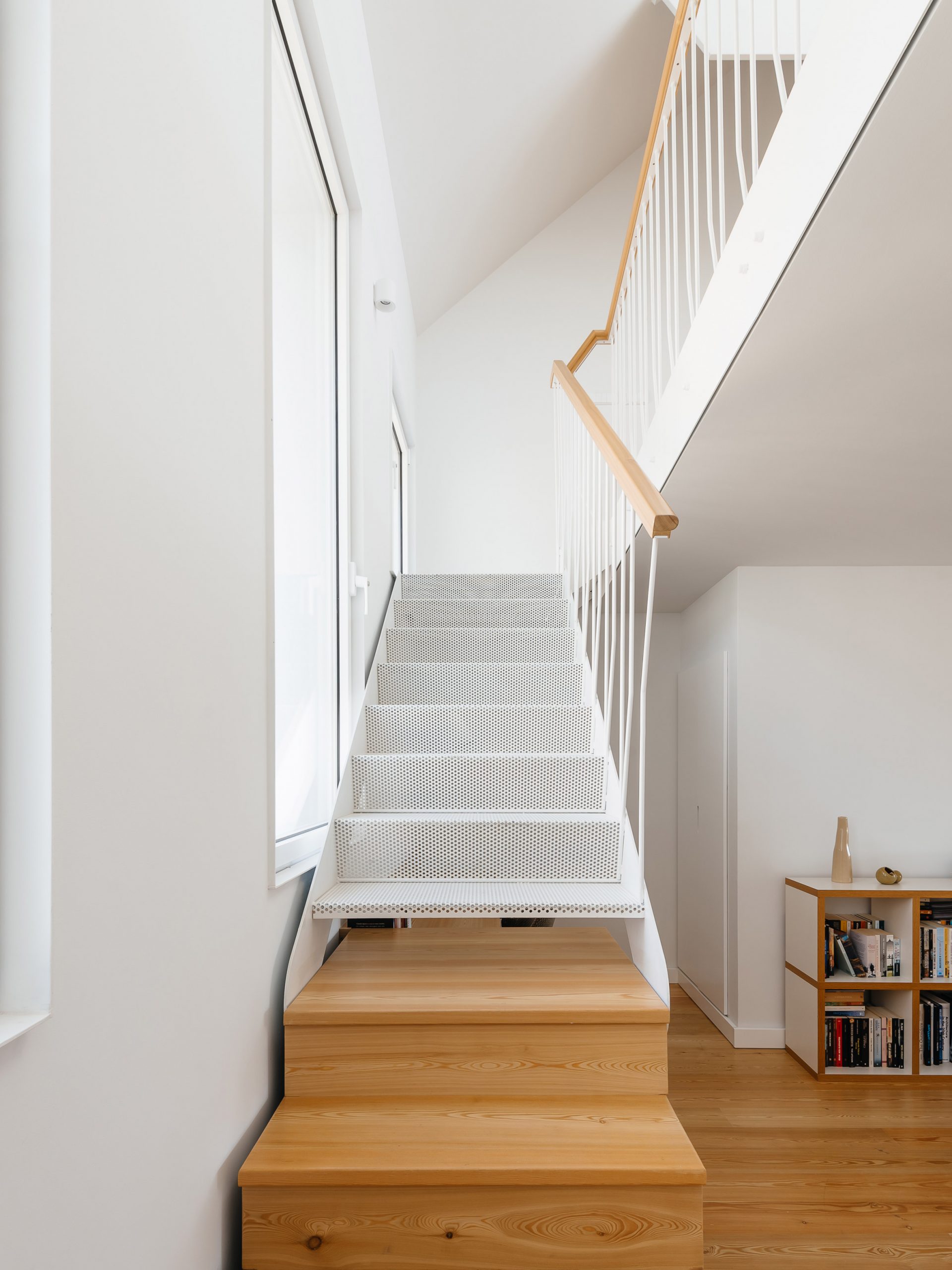 “The family has three children and they like to spend all their time together, so the option was to concentrate their sleeping area,” added practice.

“But once they grow up and need separate bedrooms one can transform the playroom into a bedroom, and the pole area into a bathroom.” 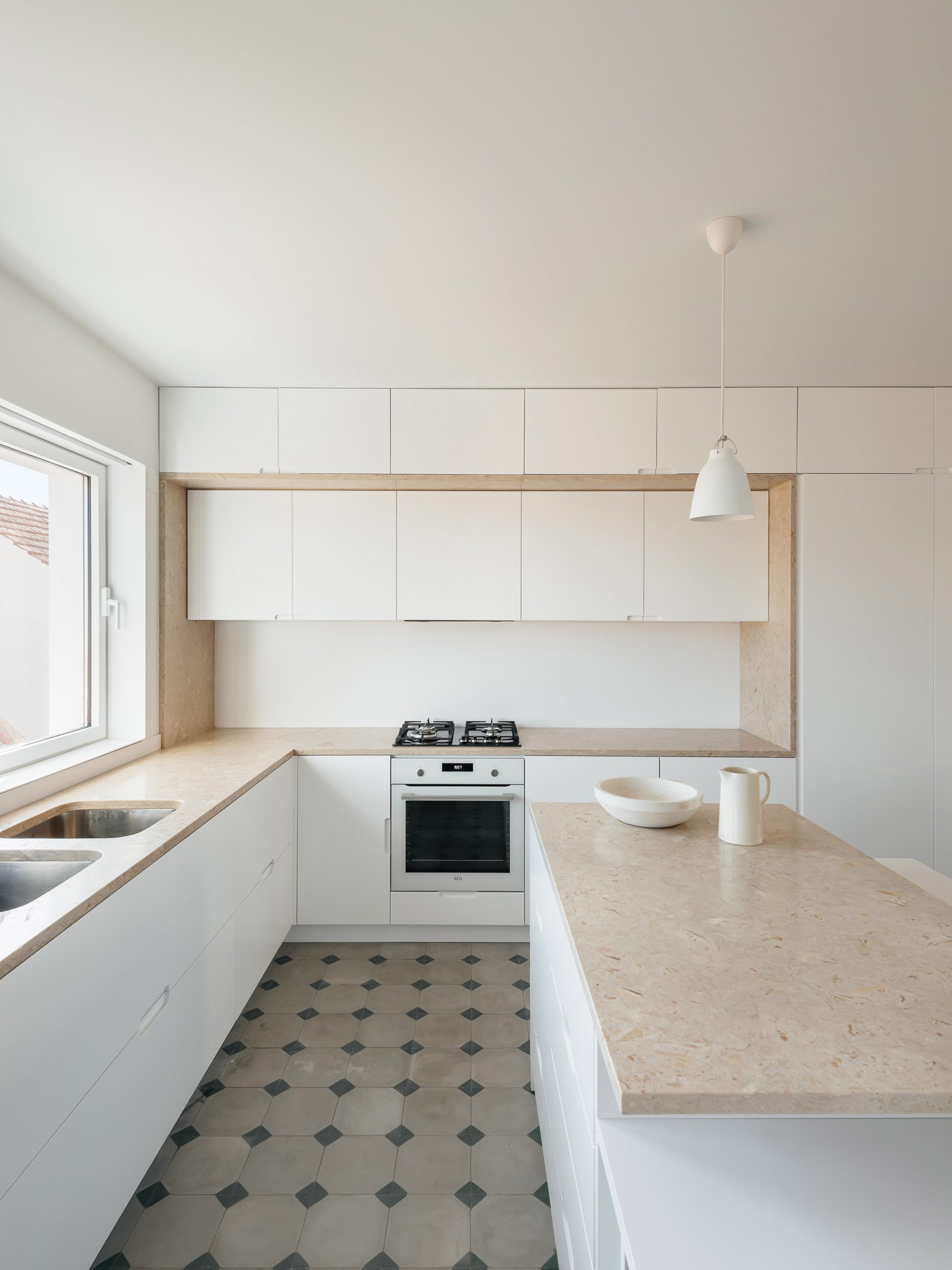 As the playroom faces onto a narrow lane often frequented by pedestrians, the rear elevation of the home has been fitted with oversized privacy shutters that can be slid across the windows.

On the home’s front elevation, the practice has simply restored the existing patterned tiles and freshened up the “Lisbon-green” paint that features on the doors. 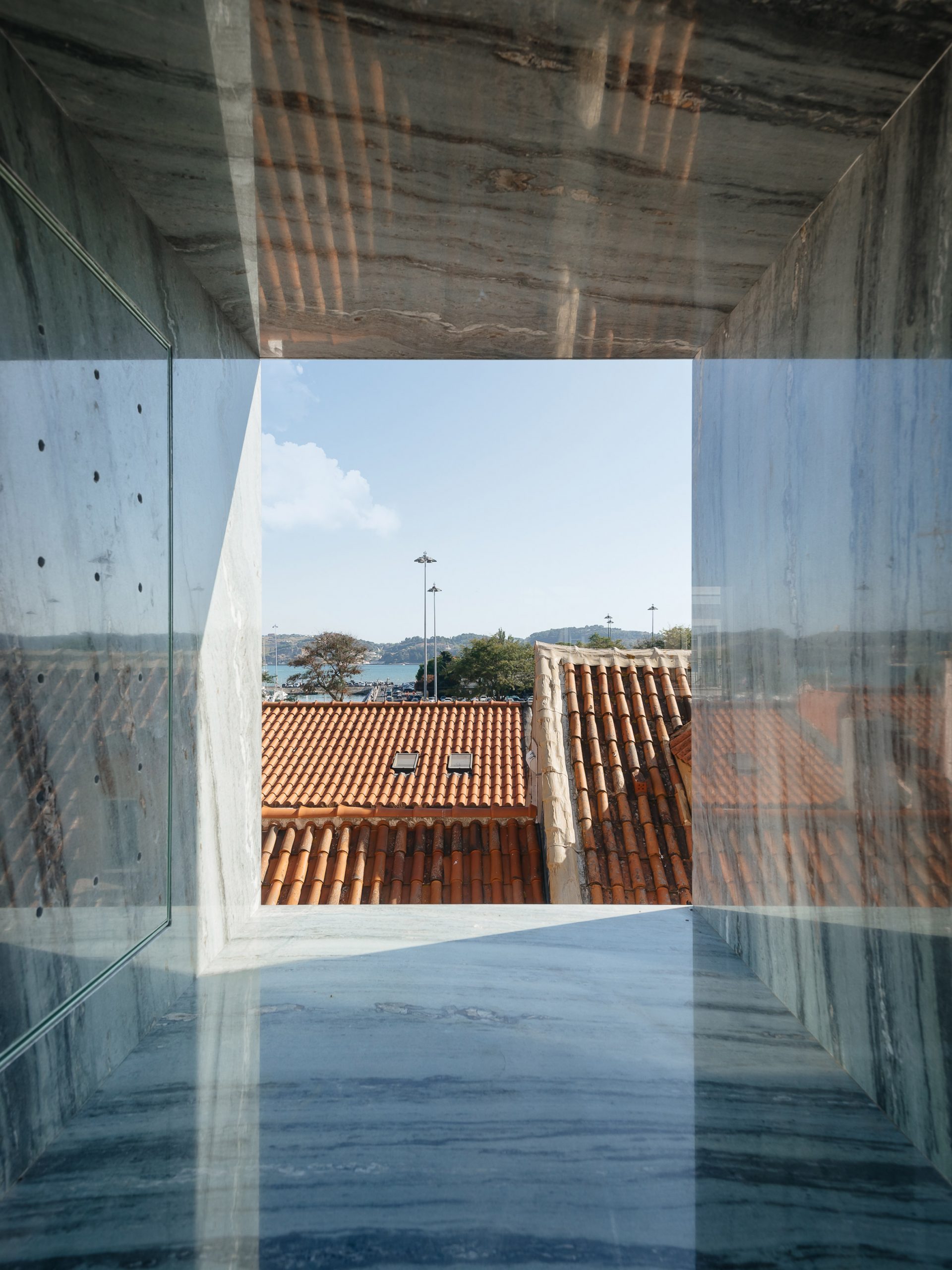 Rooms across all levels of the home have timber flooring and white walls, cabinetry and light fixtures. Perforated white metal forms the treads of some of the staircases.

A splash of colour is provided by a recessed window in the kitchen that the practice refers to as “the green eye” as it is lined with jade-coloured Verde Viana marble. 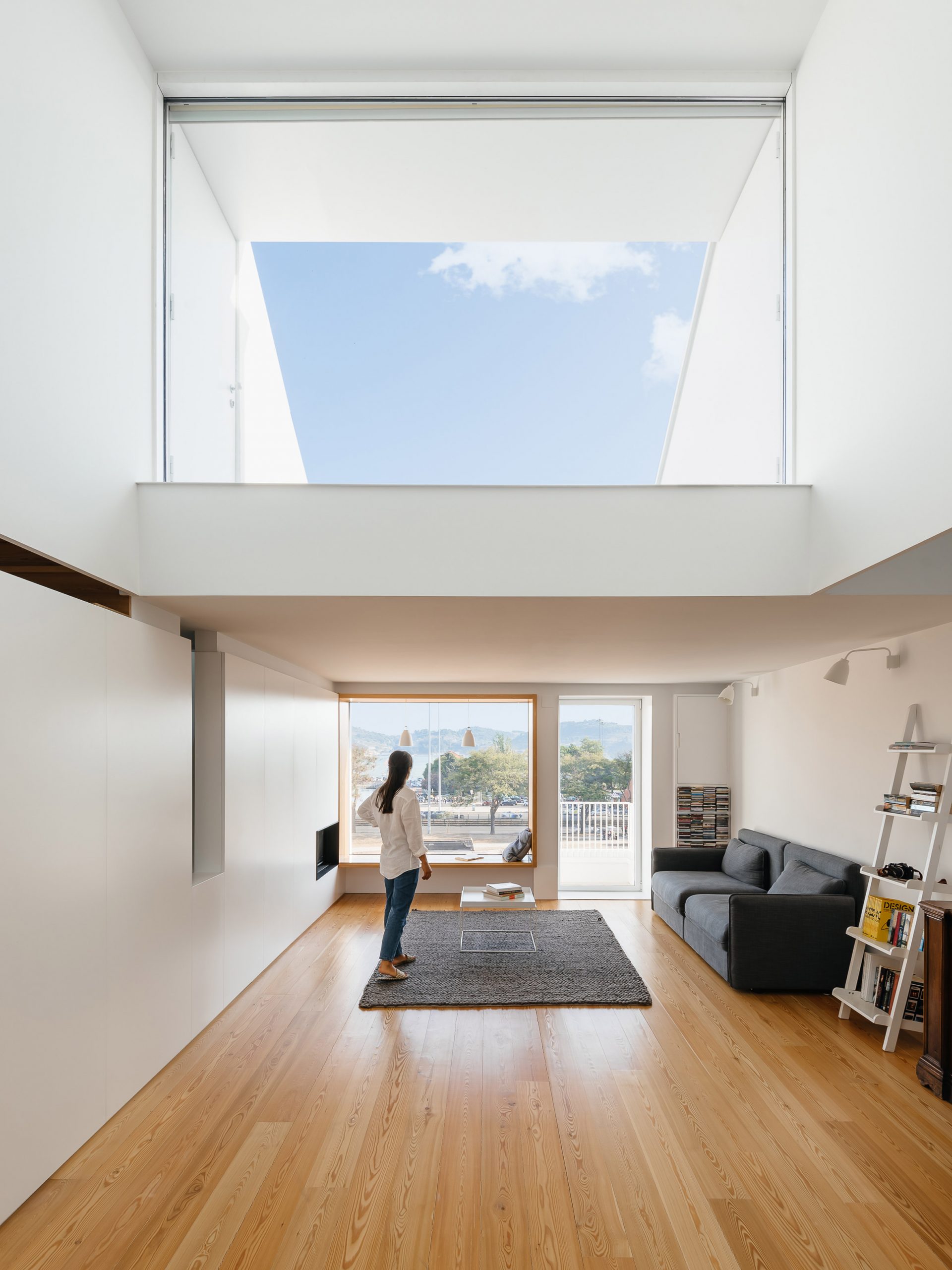 On the fifth floor is an outdoor terrace inset in the house’s pitched roof.

The terrace is backed by a glass wall that looks down to the home’s living room on the fourth floor. Here there is a large window seat where the inhabitants can sit and relax with a book. 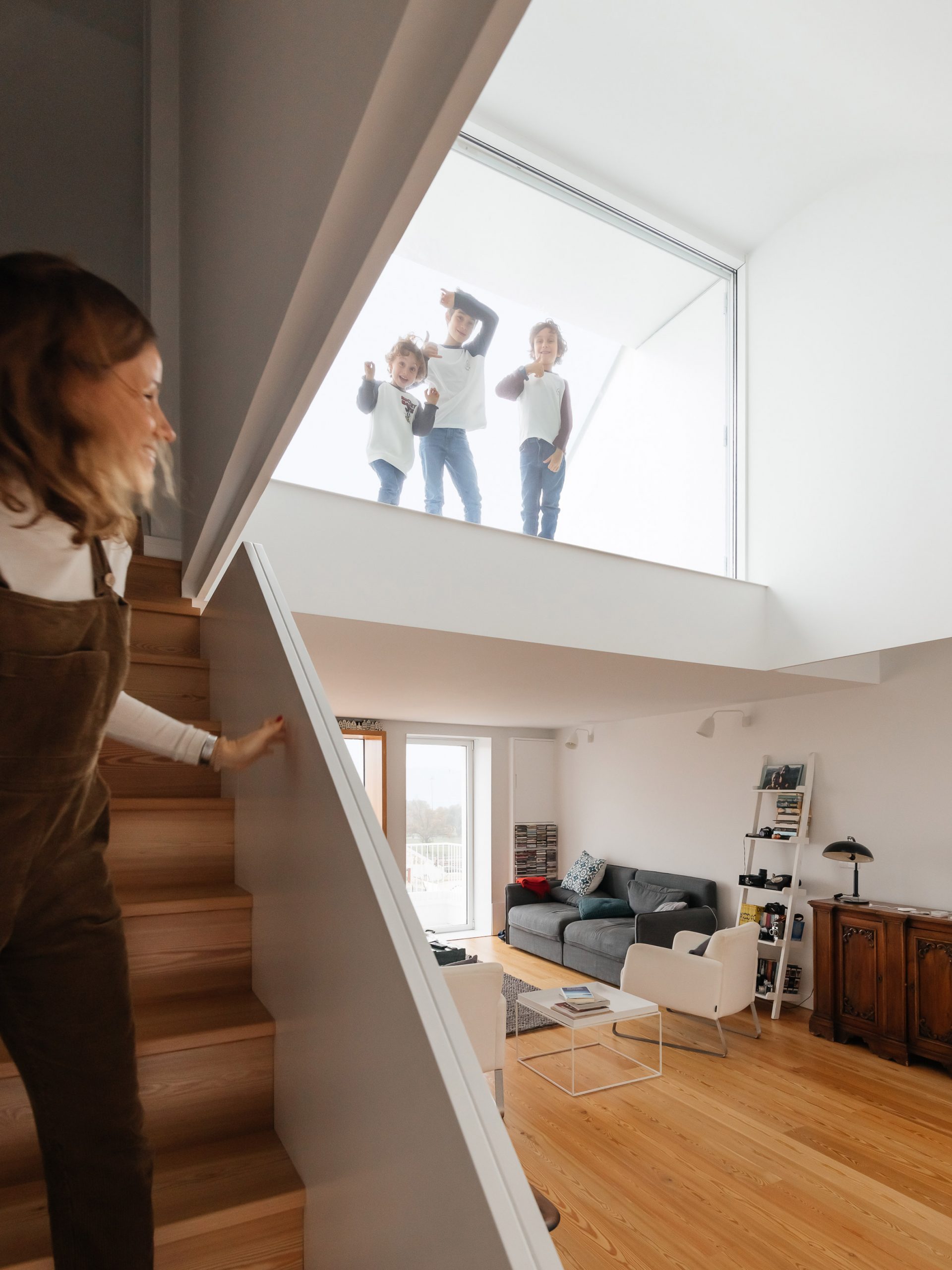 Aurora Arquitectos was established in 2010 by Sofia Couto and Sérgio Antunes.

The practice has completed a number of other projects around the Portuguese city of Lisbon – others include a brightly-hued hostel that occupies an old family home, and a renovated 1970s apartment that features angular skylights and folding walls.

Photography is by Do Mal O Menos.