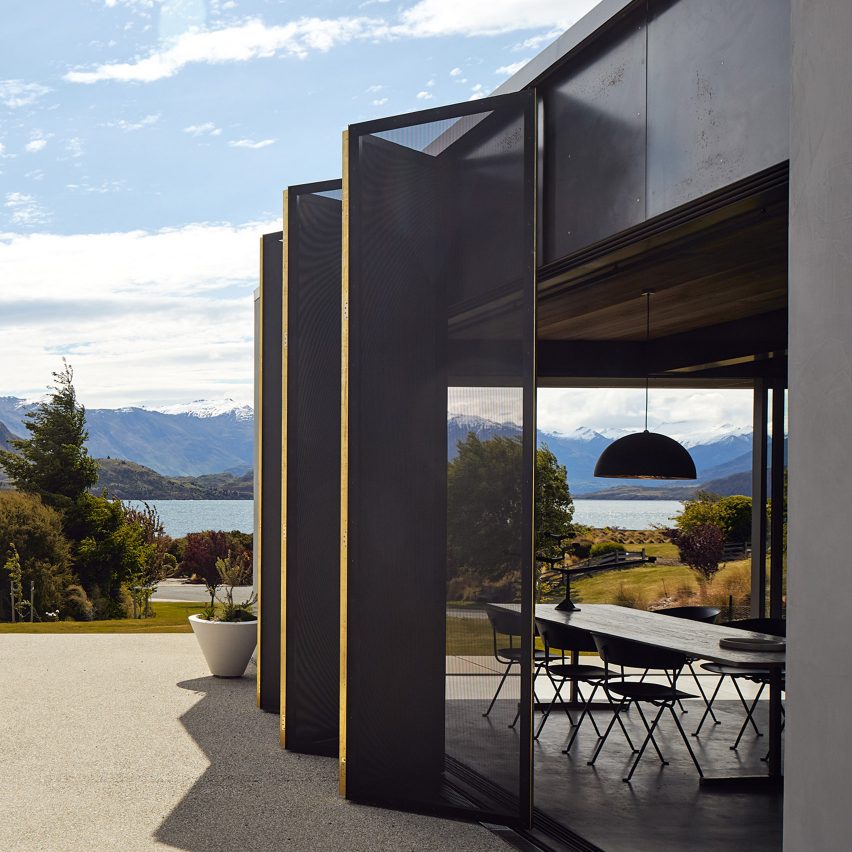 This holiday home in New Zealand by Fearon Hay Architects hides from neighbouring properties while having uninterrupted views of the mountainous landscape.

Te Pakeke house is situated north of the popular resort town Wanaka, surrounded by mountains and looking out across the waters of a vast lake.

Its owners had tasked Fearon Hay Architects with creating a winter holiday retreat that had the feel of a secluded cabin. 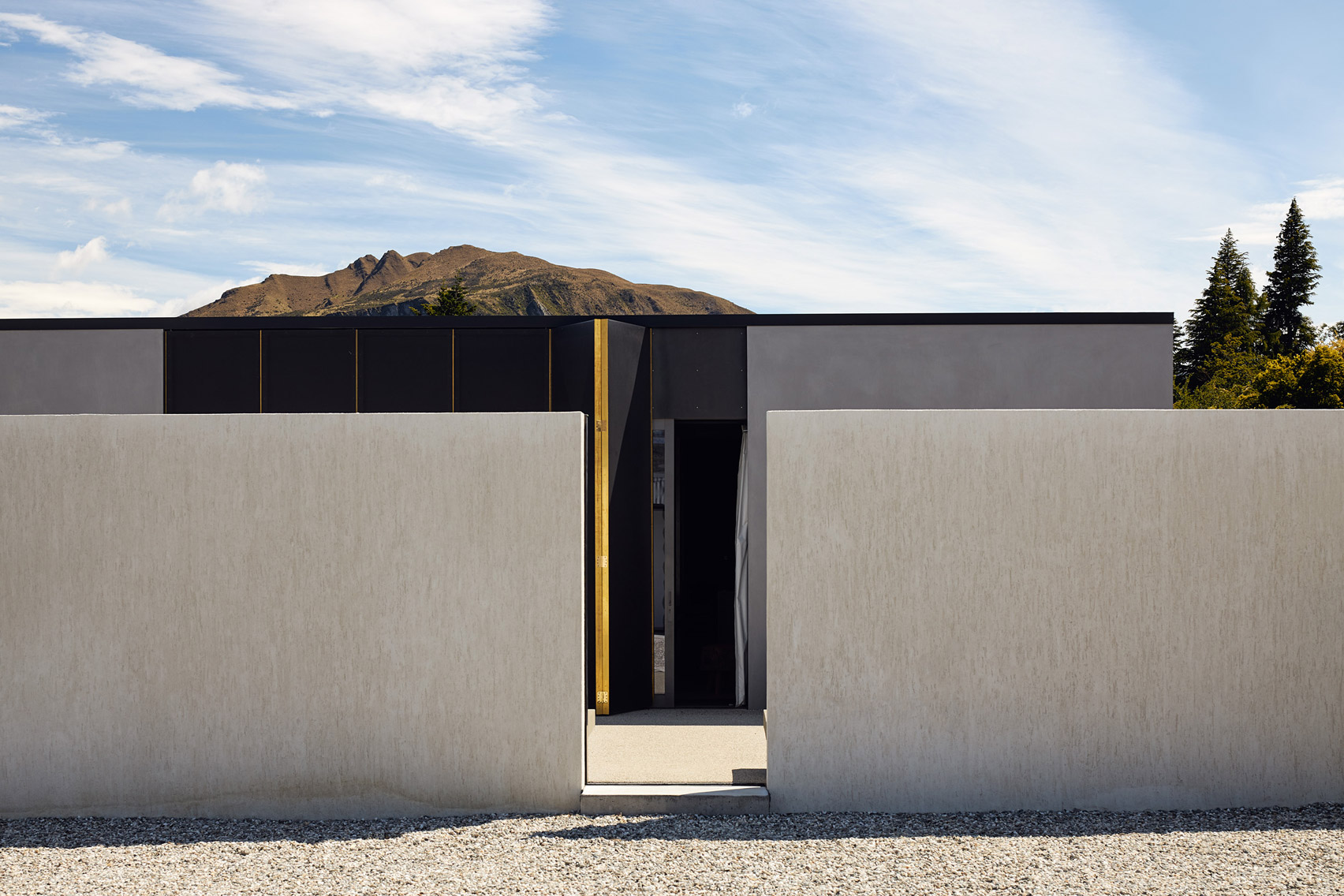 However, as the site was positioned on the corner of an arterial road, it meant the house would be visible to neighbouring properties and passersby.

With this in mind, the practice worked to create a series of layers around Te Pakeke that can provide the owners with a sense of privacy. 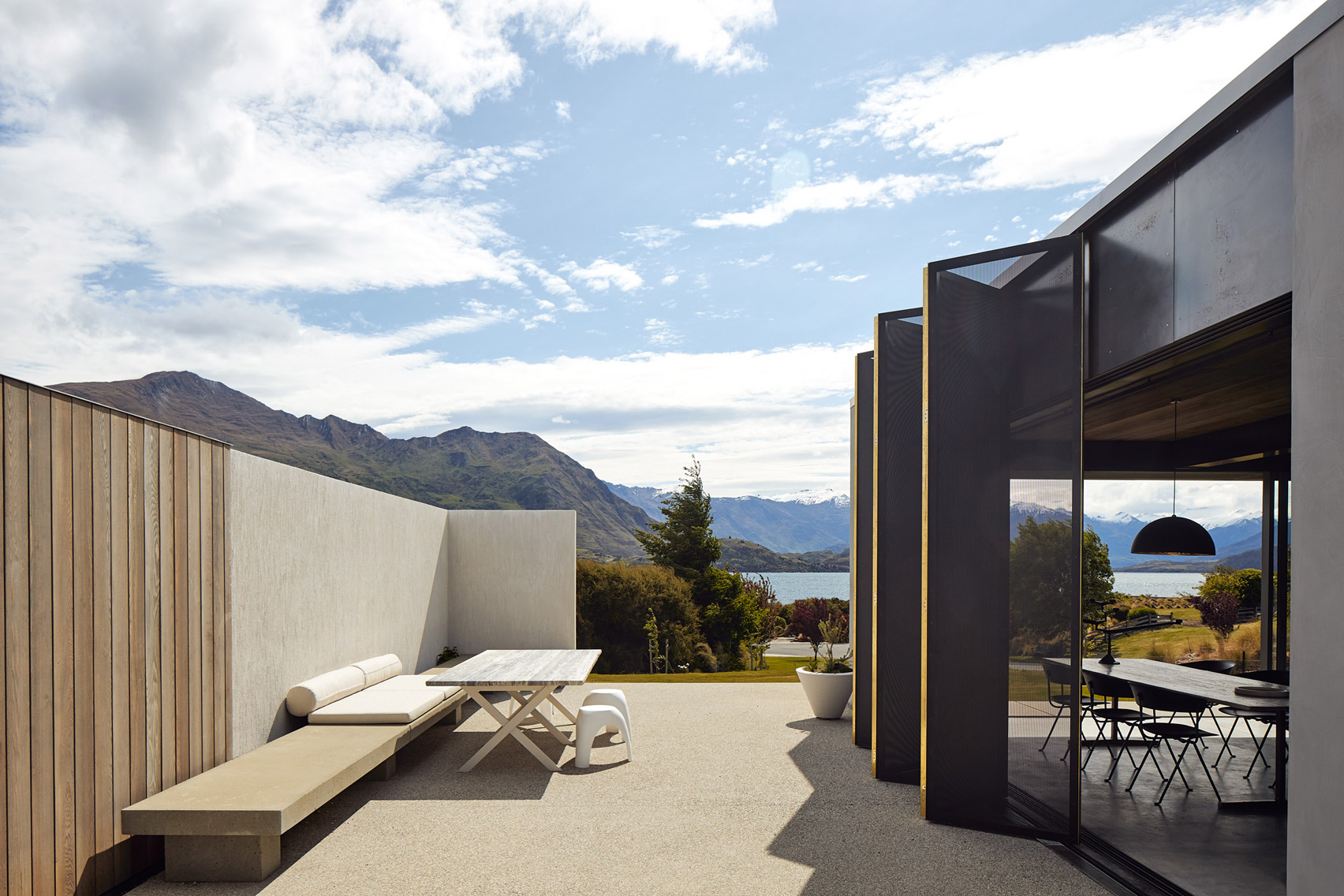 An L-shaped concrete wall wraps around the front of the house, obscuring it from view. It also offers protection from chilly prevailing winds.

Beyond the wall is a gravelled courtyard where inhabitants can sit and relax throughout the day. 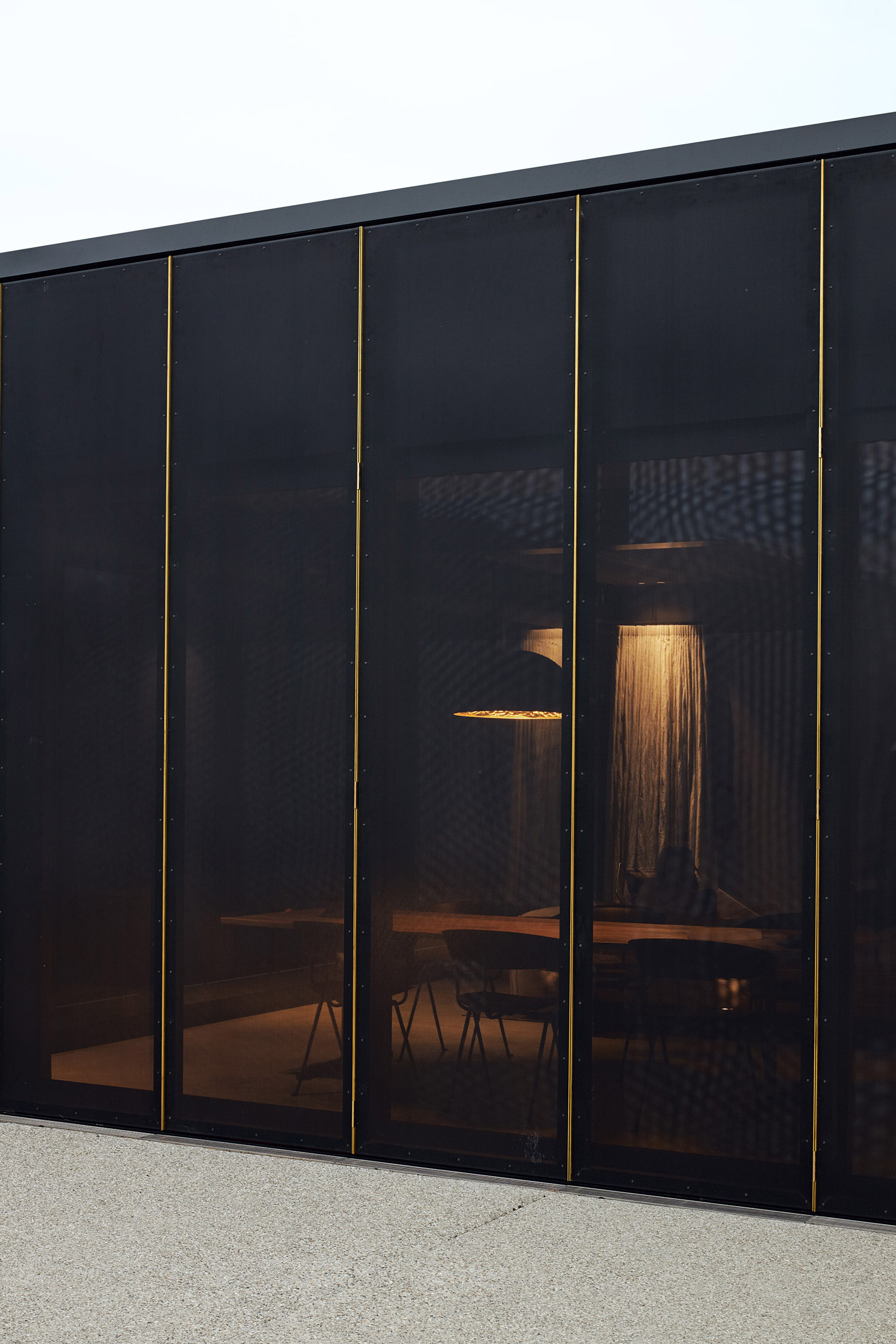 A series of perforated black screens that are each edged with brass have then been made to wrap around the Te Pakeke’s facade.

These can be pushed back concertina-style to open up the interiors to the surrounding landscape – when closed, they almost completely black-out the interior and give a shadowy look to living spaces. 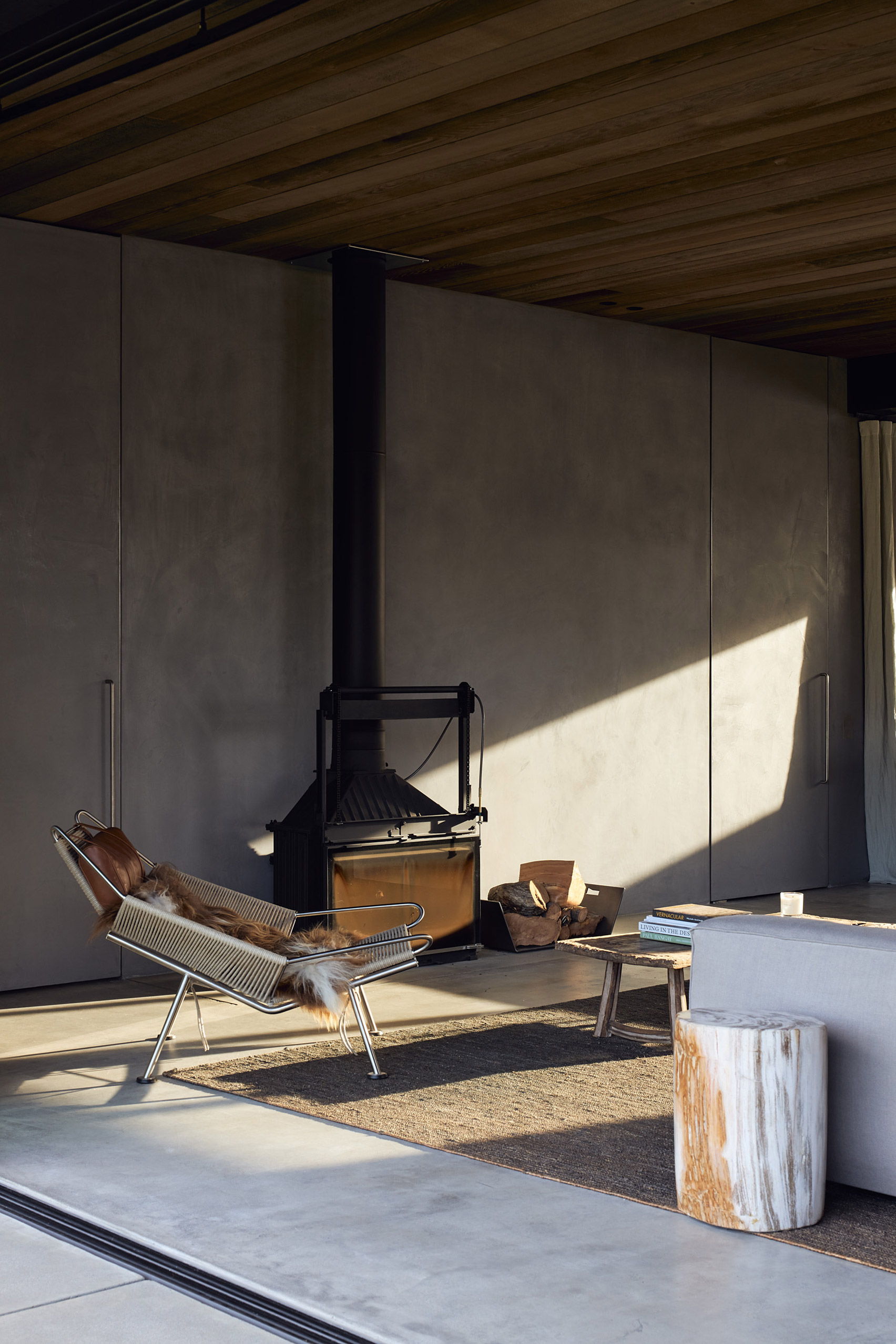 Inside, the house has been finished with moody concrete walls. Concrete has also been used for elements such as the breakfast island and countertops in the kitchen.

Textural interest is added by a boxy mirrored volume that conceals laundry facilities. The practice specifically selected a reflective material so that this part of the home would appear to “dissolve” within the interior. 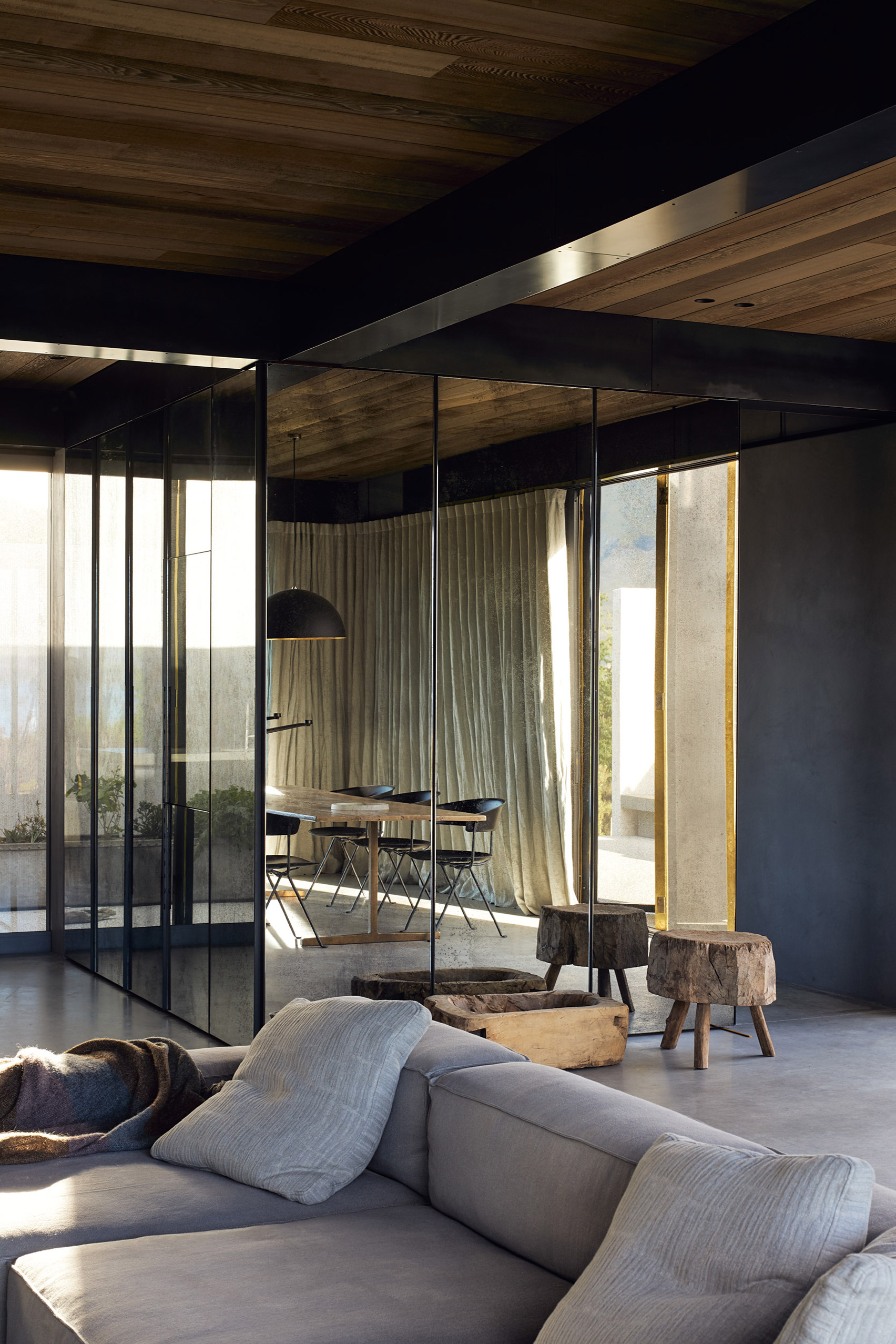 In a nod to the materiality of traditional cabins, beams of timber have been used to line the house’s ceiling.

Tree stump-like side tables also appear in the living room, which has a plump grey sofa and metal-frame armchair arranged around a wood burner. 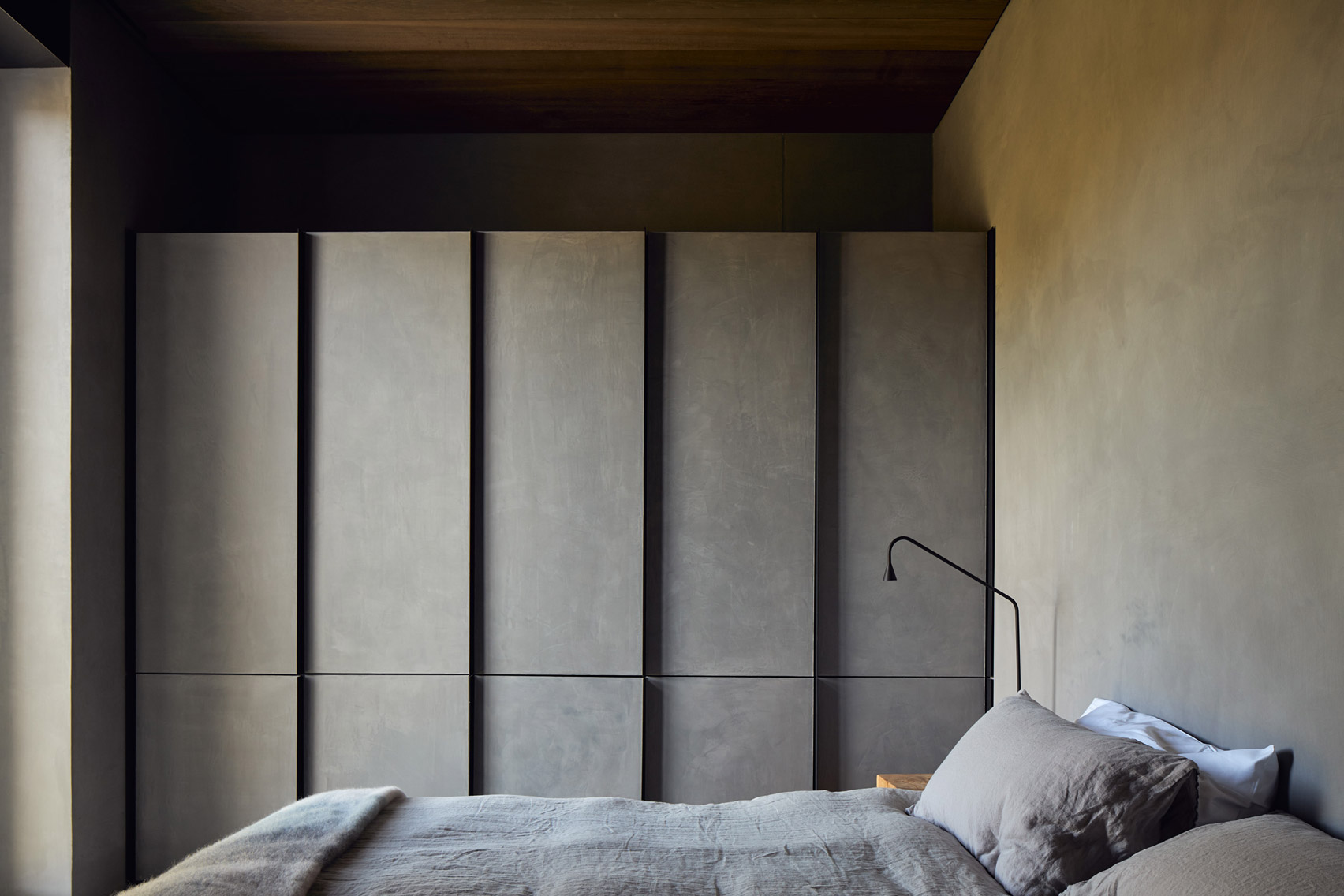 Fearon Hay Architects was founded in 1998 by Tim Hay and Jeff Fearon. The practice was exclusively based in Auckland, New Zealand until 2018 when they opened a studio in Los Angeles.

Other residential projects that, like Te Pakeke, benefit from views of New Zealand’s impressive landscape include Kawakawa House by Herbst Architects, which perches on a concrete plinth overlooking a dense canopy of pōhutukawa trees, and Avalanche House by Intuitive Architects, which frames dramatic vistas of a mountain range.