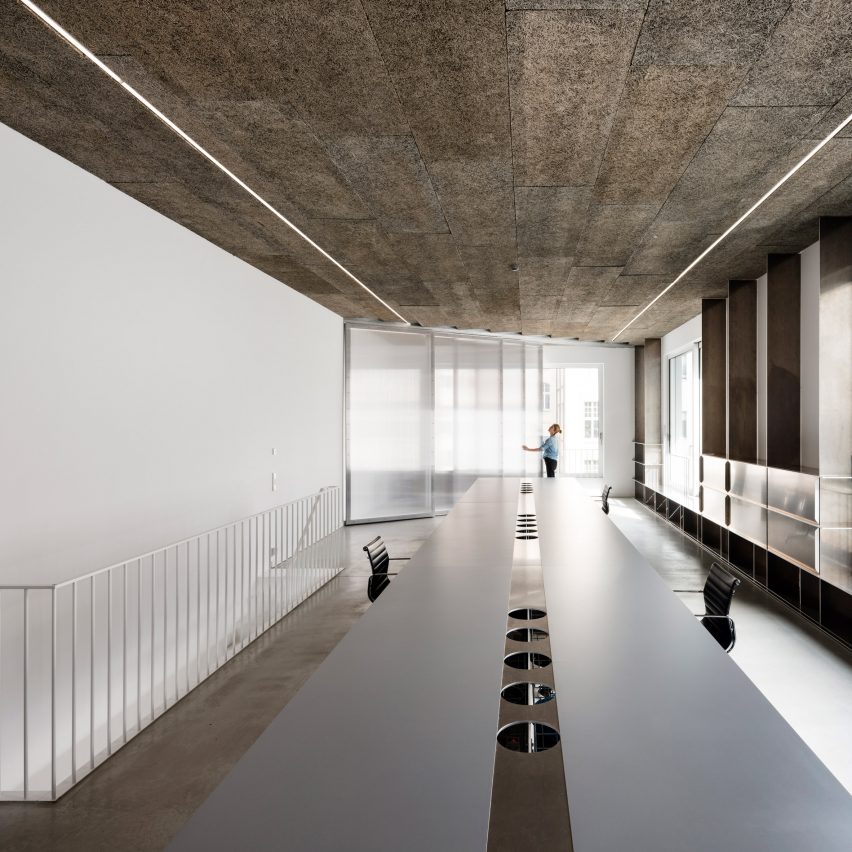 Architecture studio Gonzalez Haase AAS used aluminium and translucent sheets of polycarbonate to create the few fixtures and furnishings that appear inside this sparse Berlin office.

The office belongs to trendy communications agency BAM and has been designed by Gonzalez Haase AAS as a celebration of “raw materiality and geometric simplicity”.

“The raw, minimalistic aesthetic serves as a blank canvas for the agency’s creative projects,” the studio explained. 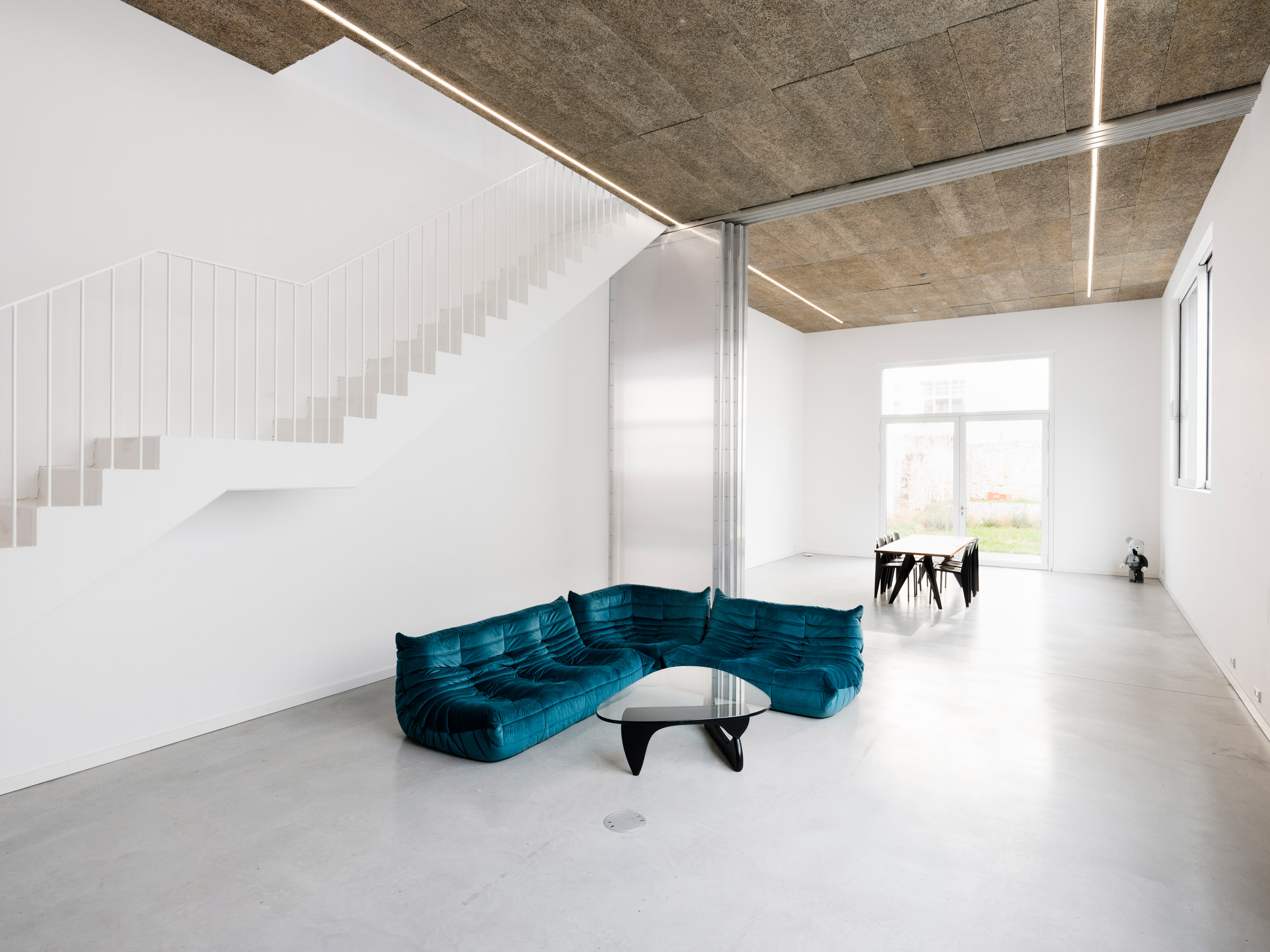 Measuring 270 square metres, the office takes over the ground and first floor of a building at the heart of the German capital.

The spacious lower level has been left open so that the agency can use it for large-scale meetings, or transform into a showroom or gallery-style space for events. 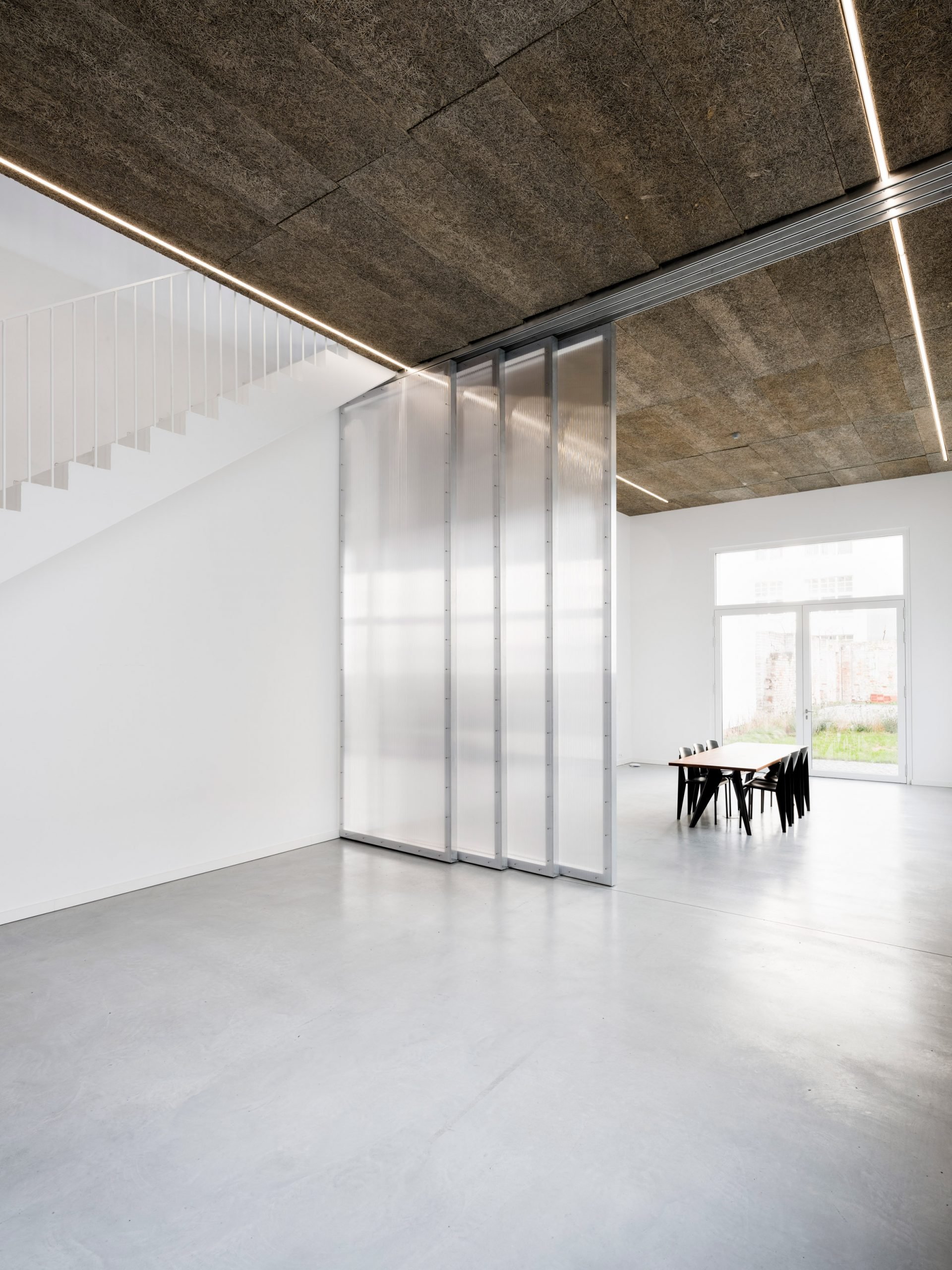 It’s only interrupted by a floor-to-ceiling sliding partition that can be pulled across to divide the space into two separate rooms when necessary.

The partition is crafted from four sheets of polycarbonate and has intentionally been positioned to sit slightly diagonally to contrast the sharp right angles that appear elsewhere throughout the space. 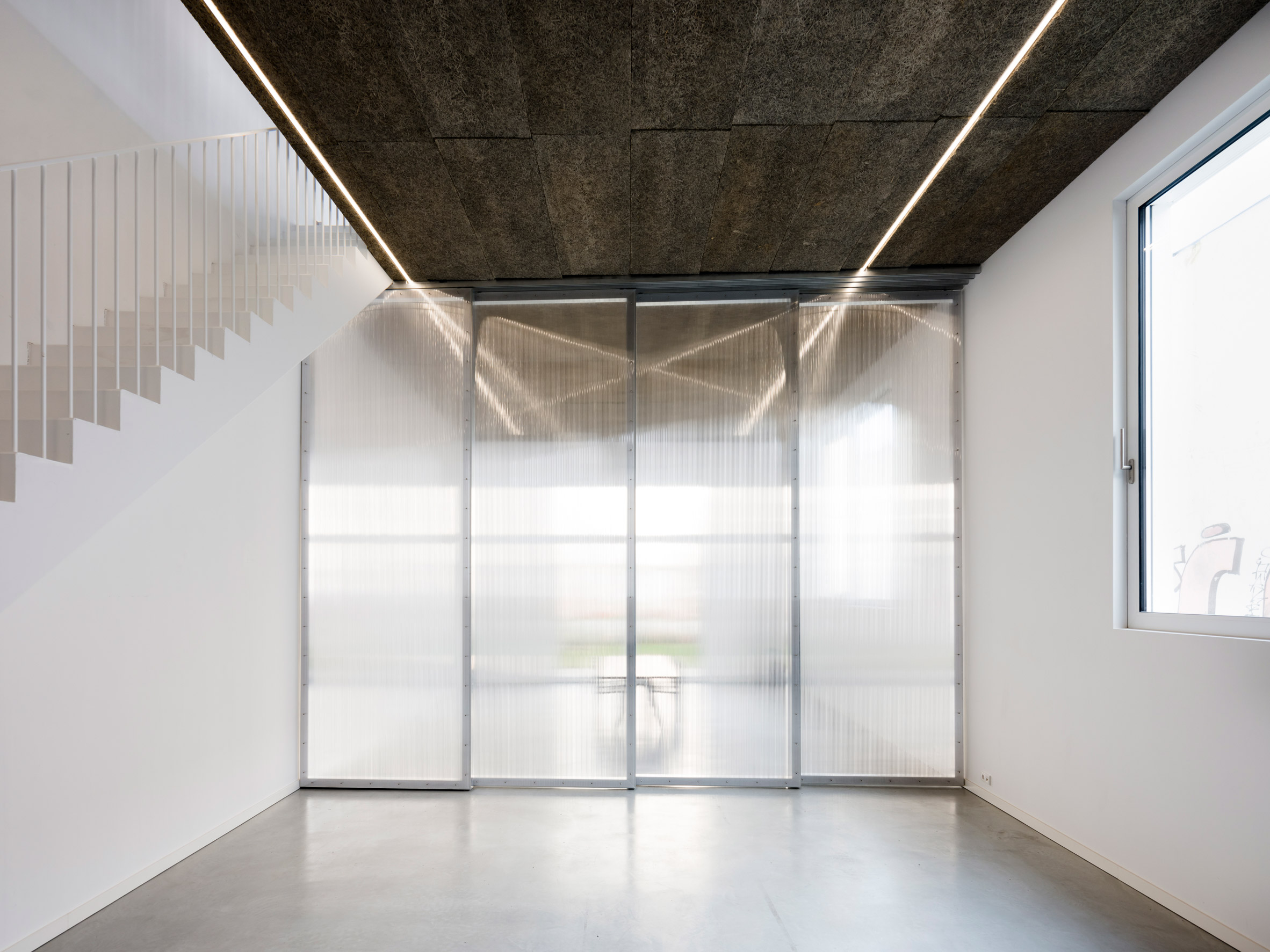 A white flight of stairs with a wire-frame balustrade leads up to the office proper.

Raw aluminium has been used to craft a series of blocky furnishings at this level, most notably a 22.5-metre-long shelf that extends from one side of the room to the other.

The shelf incorporates several open and closed storage cupboards, and a bench seat where staff can sit to eat their lunch. 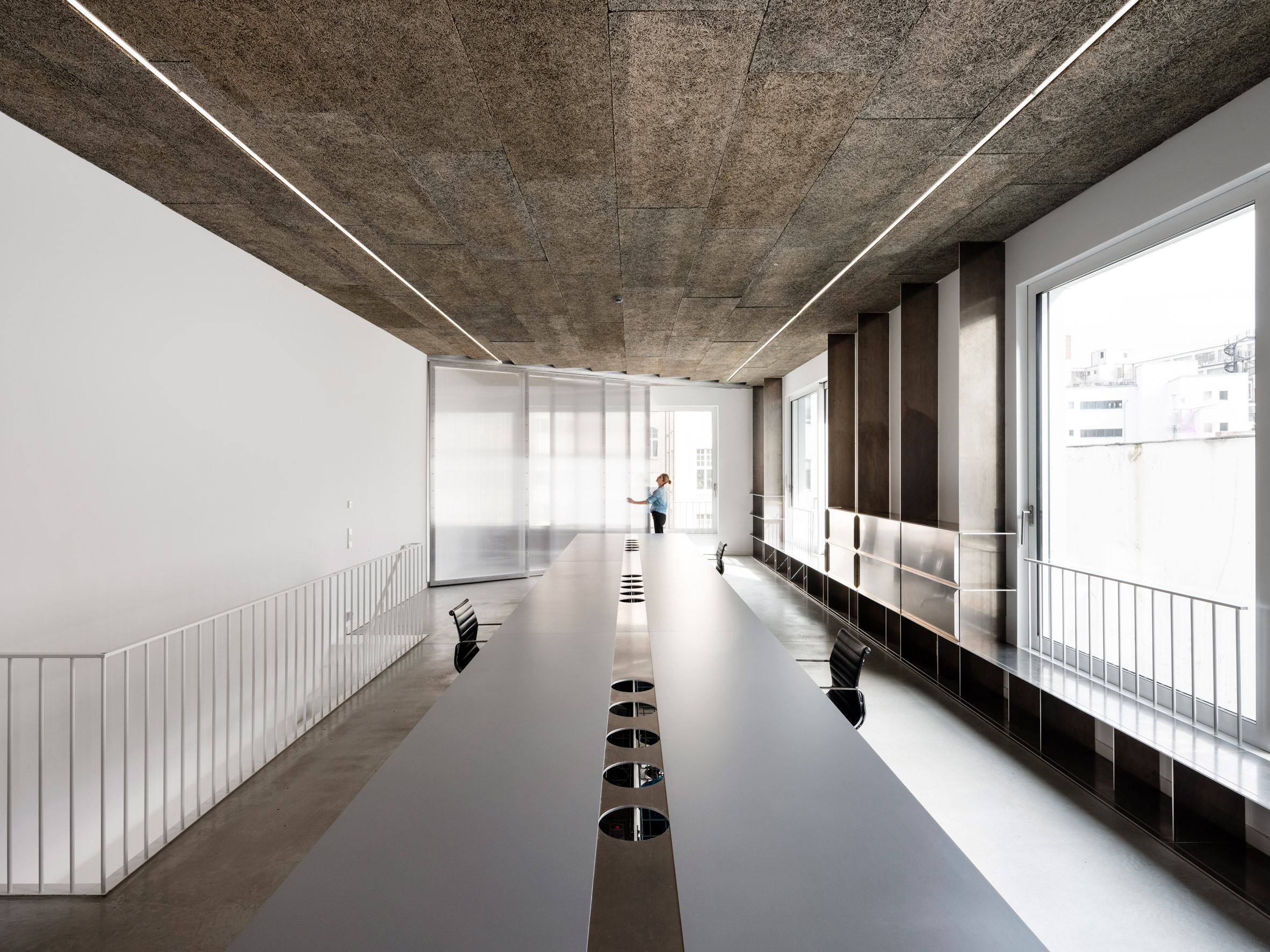 Aluminium has additionally been used to make the long central work desk and the cabinetry in the small kitchenette.

Another angled polycarbonate partition appears at this level, but in this instance separates a boardroom. 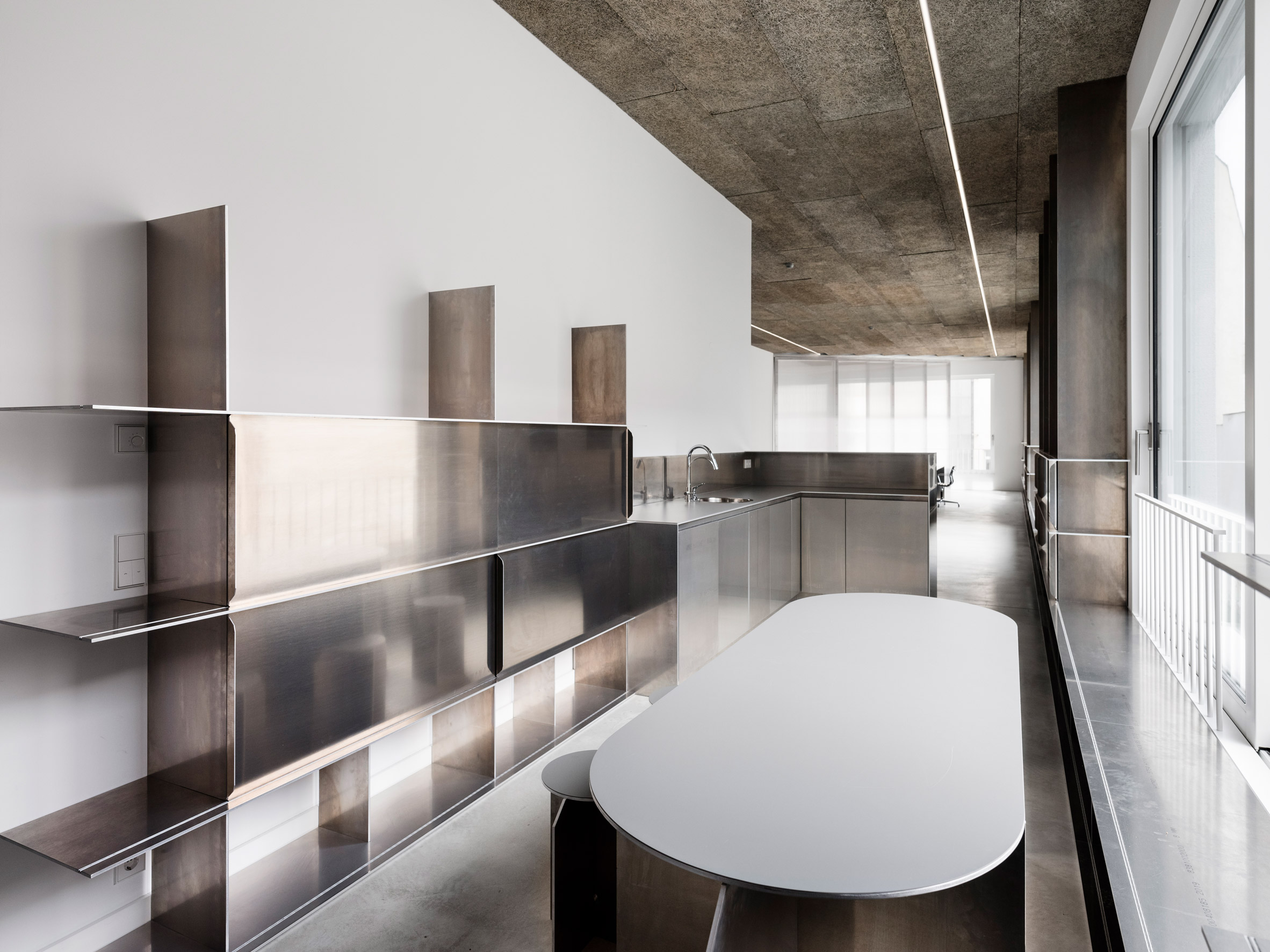 Further textual interest is created by the chipped wood and wool acoustic panels that have been staggered across the ceiling. They’re inset with simple strip lights that illuminate work areas below. 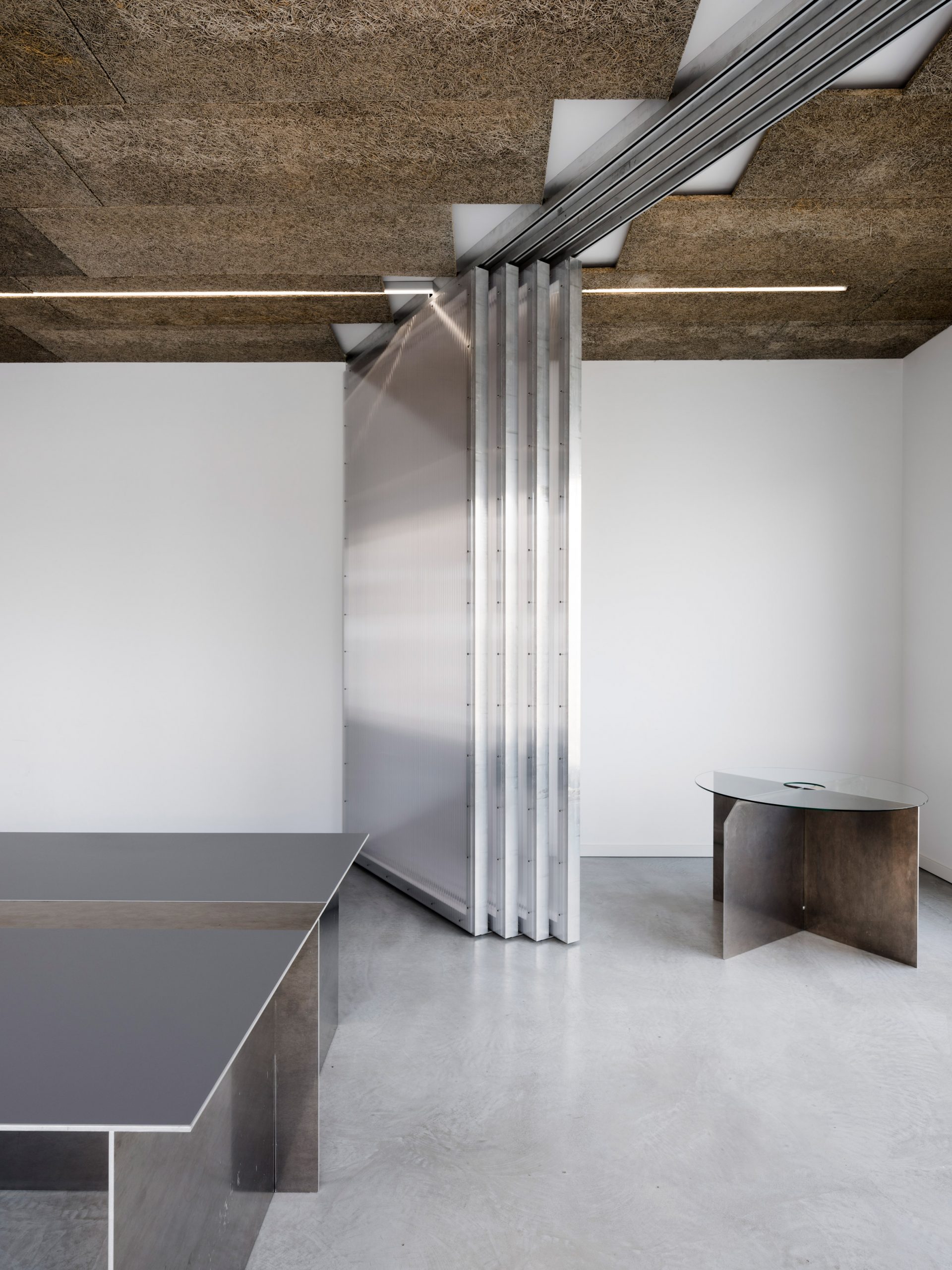 Gonzalez Haase AAS was established in 1999 by Pierre Jorge Gonzalez and Judith Haase.

The studio often applies a pared-back aesthetic to its projects – last year it completed Tem-plate, a fashion concept store in Lisbon that has been simply finished with white walls, concrete floors and display fixtures clad in crinkled silver metal. 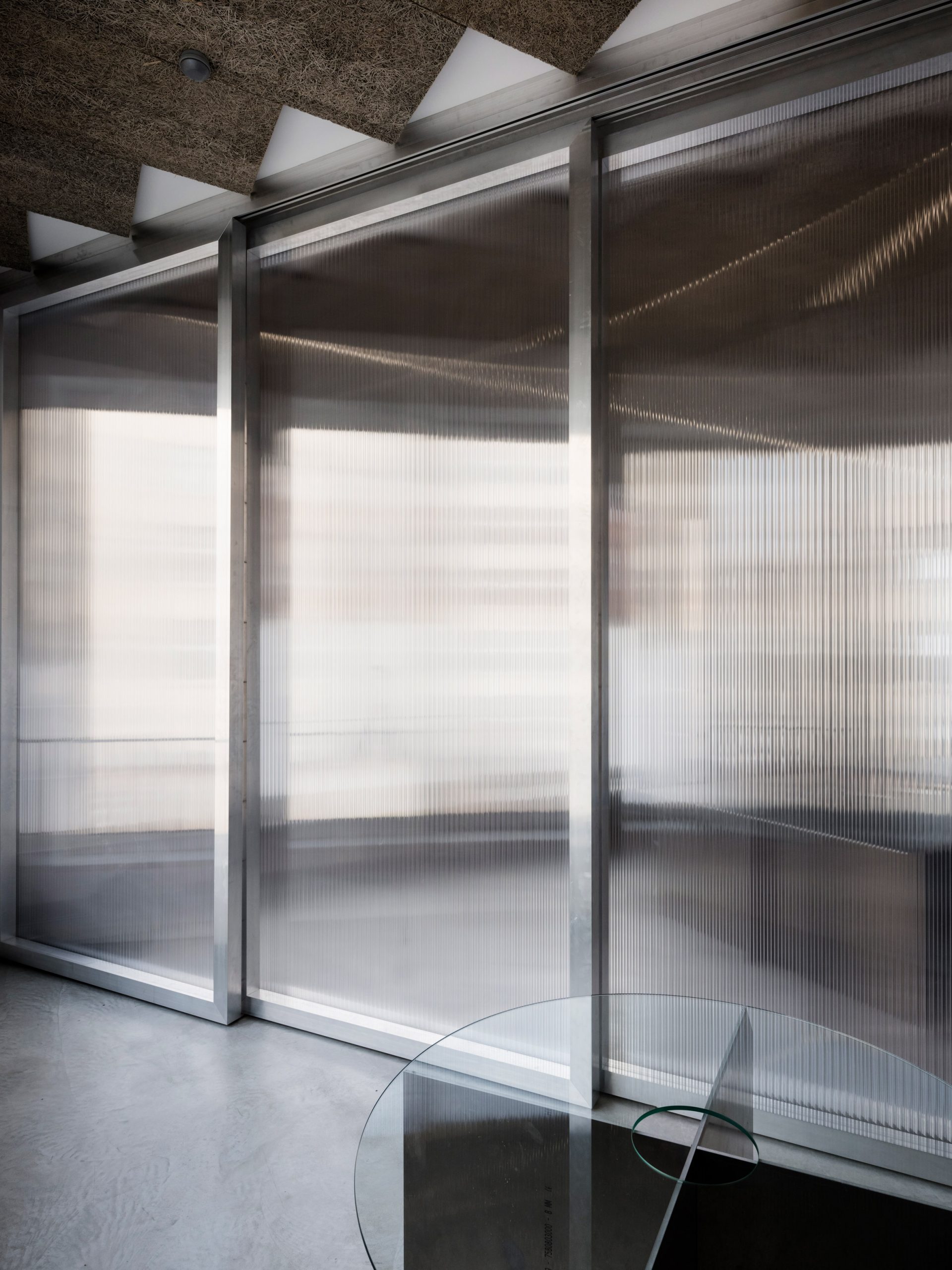 As well as BAM’s office, other minimal workspaces in Berlin include Brutalist Silence, an office designed by Annabell Kutucu that features exclusively concrete surfaces and only a handful of furniture.

Photography is by Thomas Meyer.