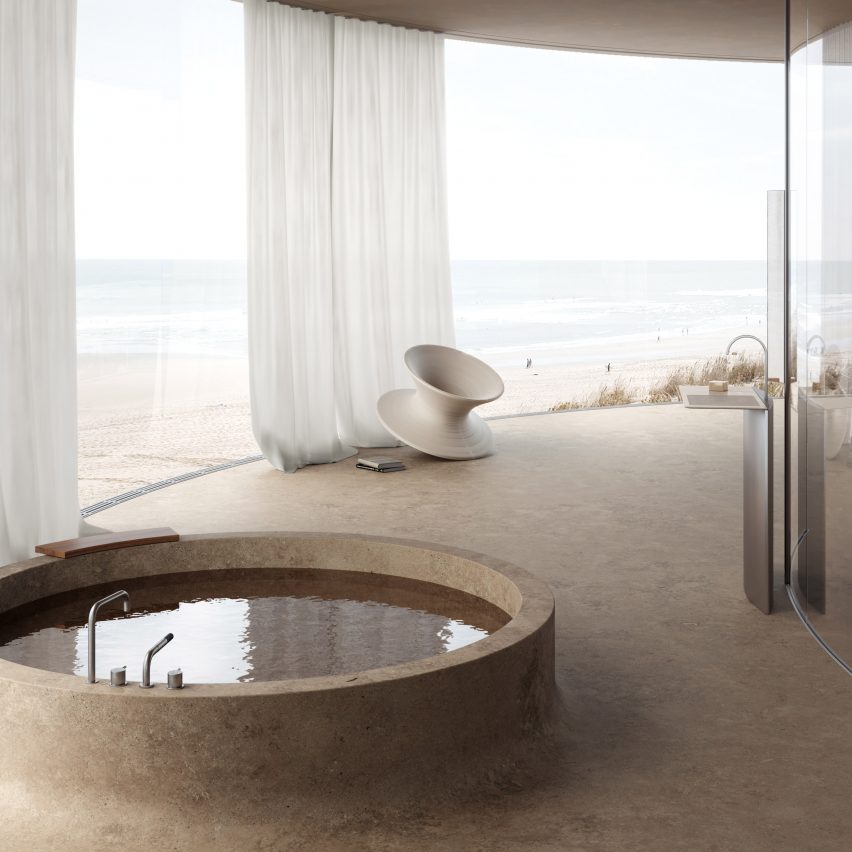 Craggy rock walls and a hot-spring style bathtub would feature in this imaginary Odessa hotel room that interior design studio Sivak & Partners has envisioned in a series of renderings.

The guest suite would come as part of a boutique beach hotel in the Ukrainian port city of Odessa that Sivak & Partners‘ chief designer, Alexey Gulesha, was challenged to create just over a year ago.

He decided to share the studio’s renderings when the global coronavirus crisis began and put a pause on the design process.

“This project started from the idea to make something different from other hotels in Odessa – the client had bought a plot and asked us to design something which we wanted to see there, so this is our proposal,” Gulesha told Dezeen. 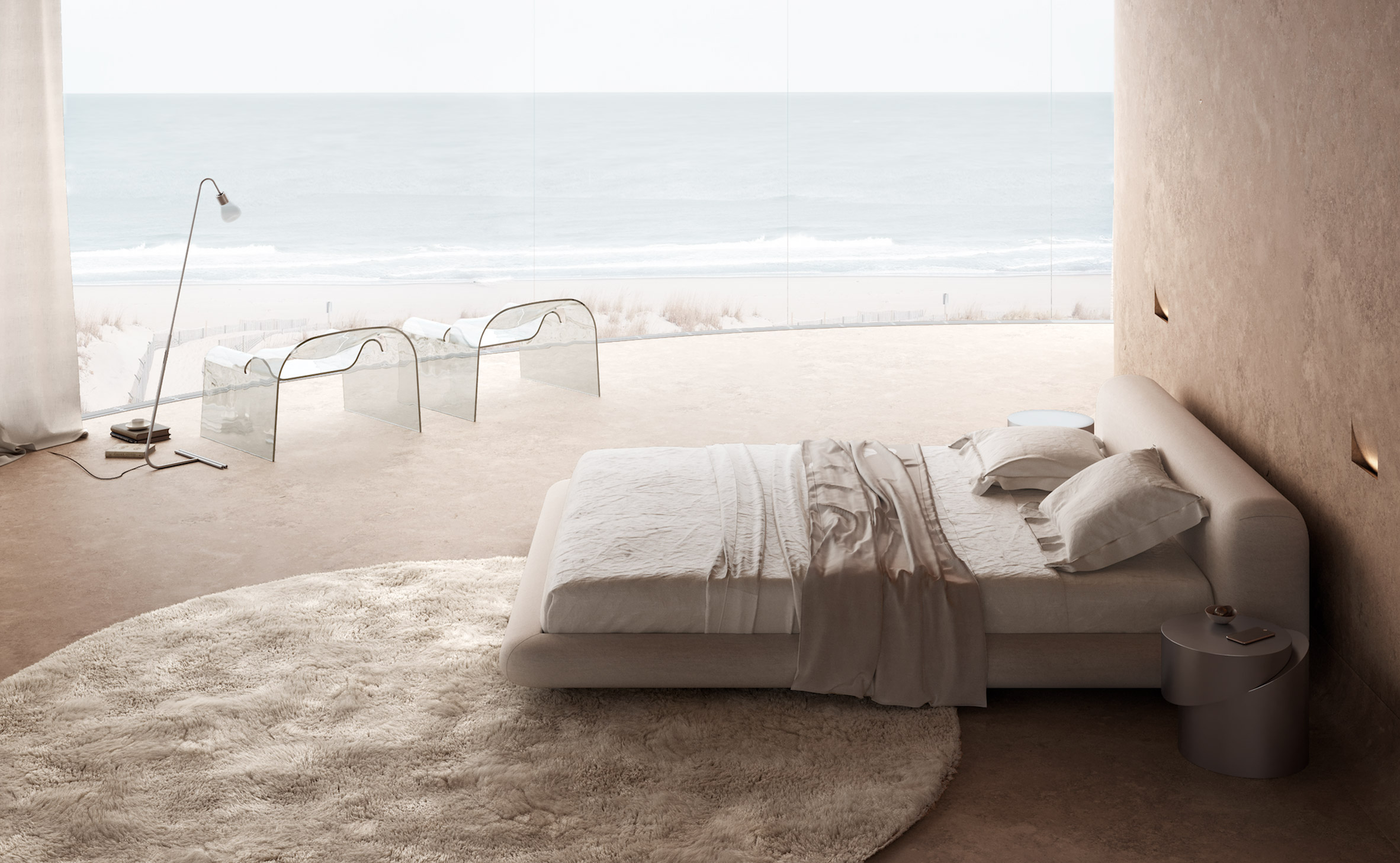 Influenced by the dazzling settings seen in James Bond films from the 1980s, Gulesha has envisioned the guest suite as being fronted by a curved, full-height window that offers sweeping vistas of the sandy shoreline and rolling ocean waves.

In almost every room he has tried to foster a sense of “tactile contrast” – for example, in the bedroom, the hard stone floor is topped with a fluffy cream-coloured rug. A plump bed frame has also been placed beside a couple of Italian architect Cini Boeri’s glass Ghost chairs. 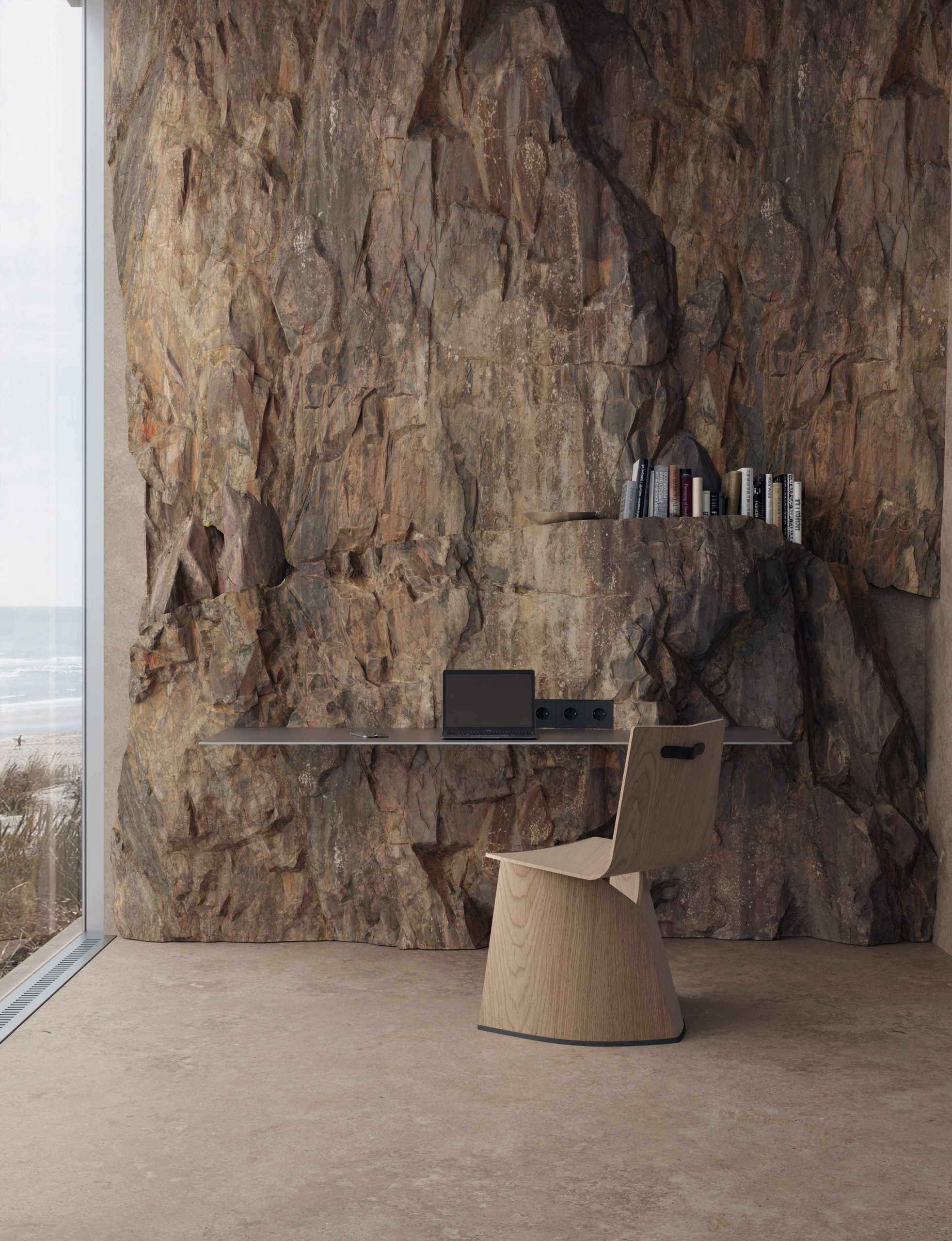 “I like to draw people’s attention to the fact that the materials to the touch may not be what they seem visually,” Gulesha explained.

“The Cini Boeri’s armchairs look like a cold piece of glass, but they are surprisingly convenient and comfortable when you sit in them.” 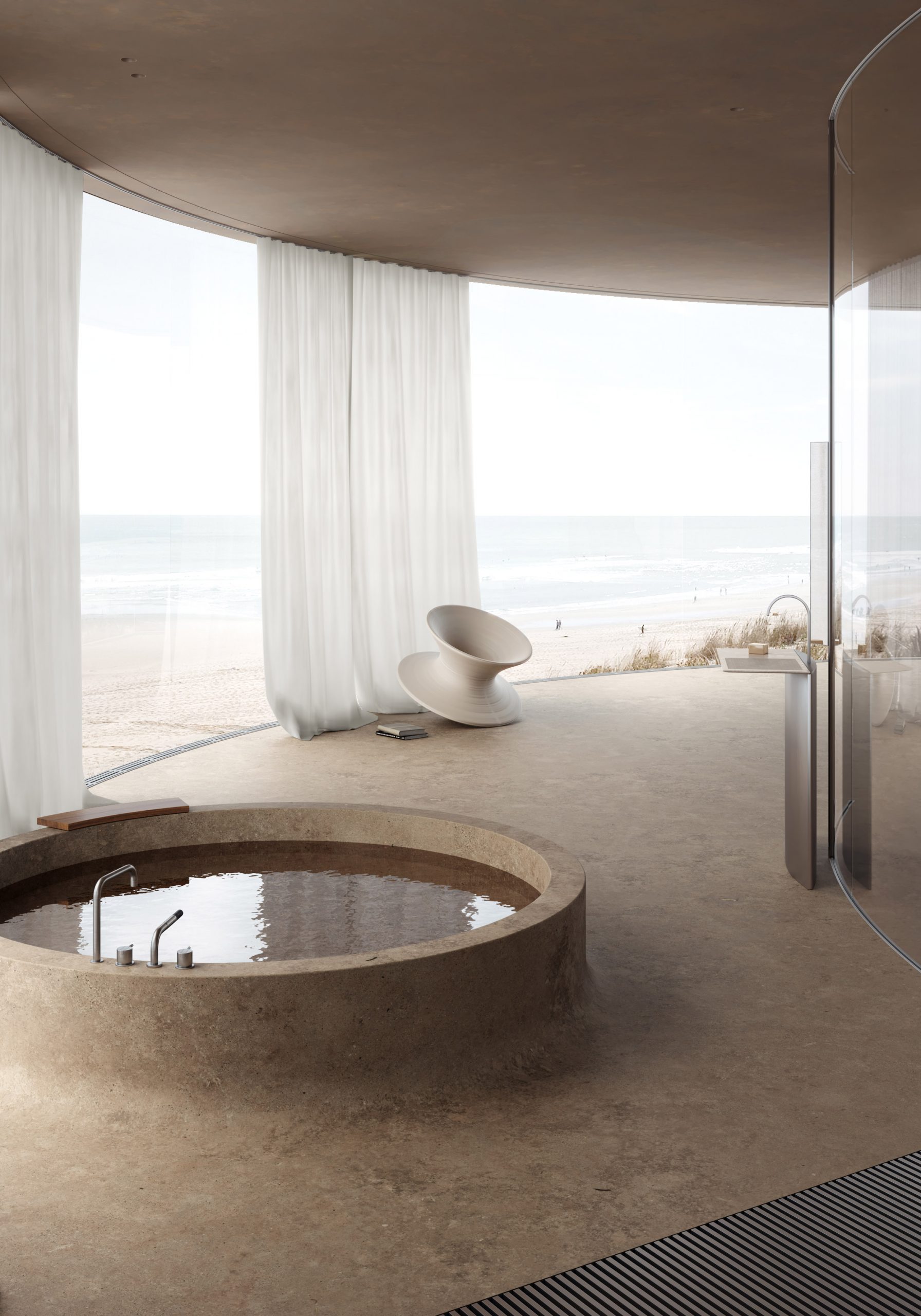 A wall that resembles a craggy cliff face would feature in the study. Other than a simple steel desk and wooden chair, Gulesha has largely omitted standard office paraphernalia so that guests would be more inclined to spend relaxing time down on the beach instead of doing work.

“The idea of the materials is that in this digital era, when work means sitting on the PC and answering email for two to three hours, I want to see and feel something natural,” added Gulesha. 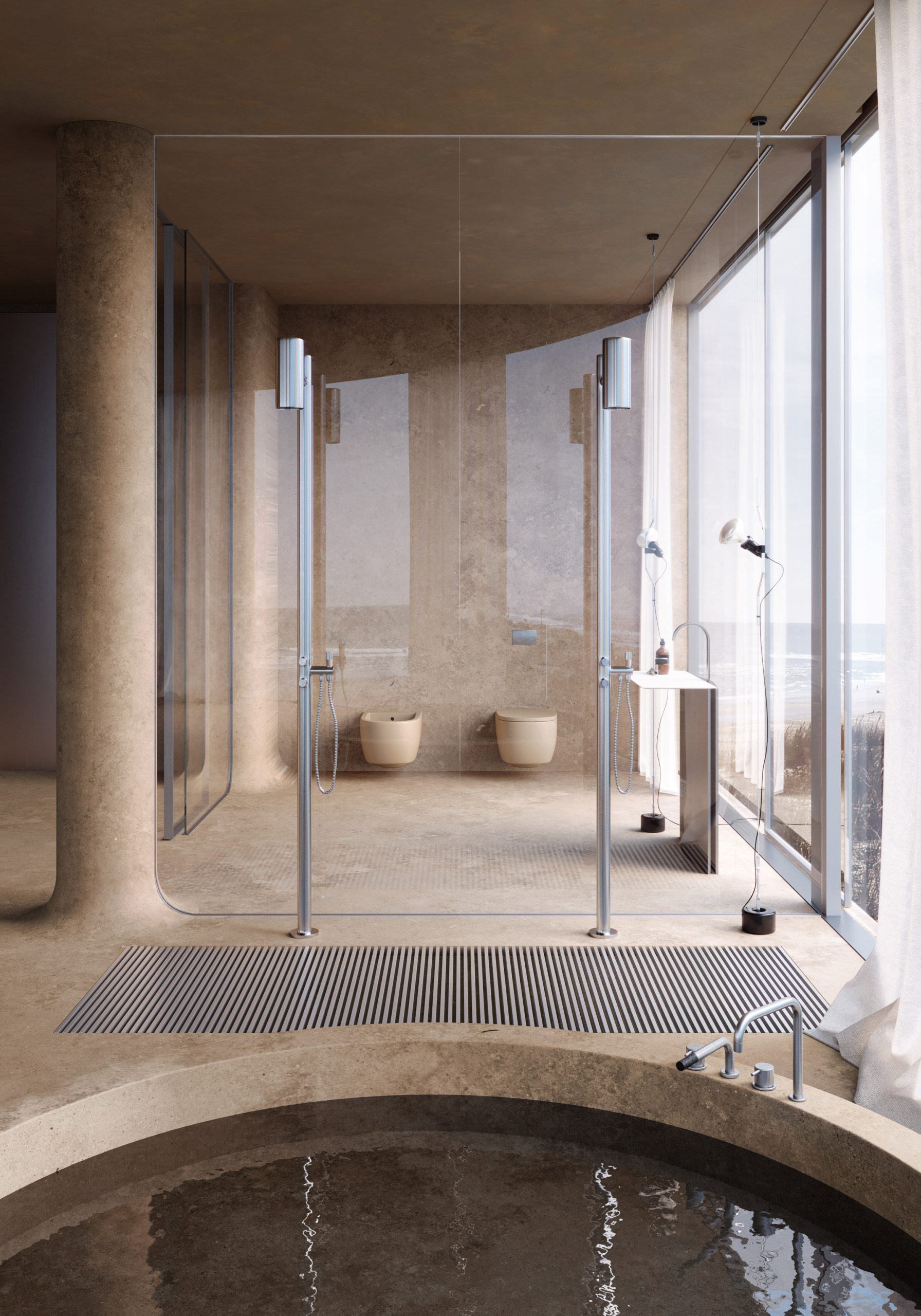 A focal point of the suite is the circular tub in the bathroom, which would slope up from the stone floors to make guests feel like they’re “bathing in a hot spring”.

Bathroom facilities would be housed inside a see-through volume that, using smart-glass technology, would turn opaque whenever in use.

The suite would also include a small kitchenette, should future guests not want to dine at the hotel’s restaurant. At its centre would be a timber prep counter that balances across a pair of chunky stone blocks.

A couple of rounded boucle sofas would then be used to dress the lounge area, along with a blush-pink abstract artwork that is meant to mirror the texture of the surrounding mottled plaster walls. 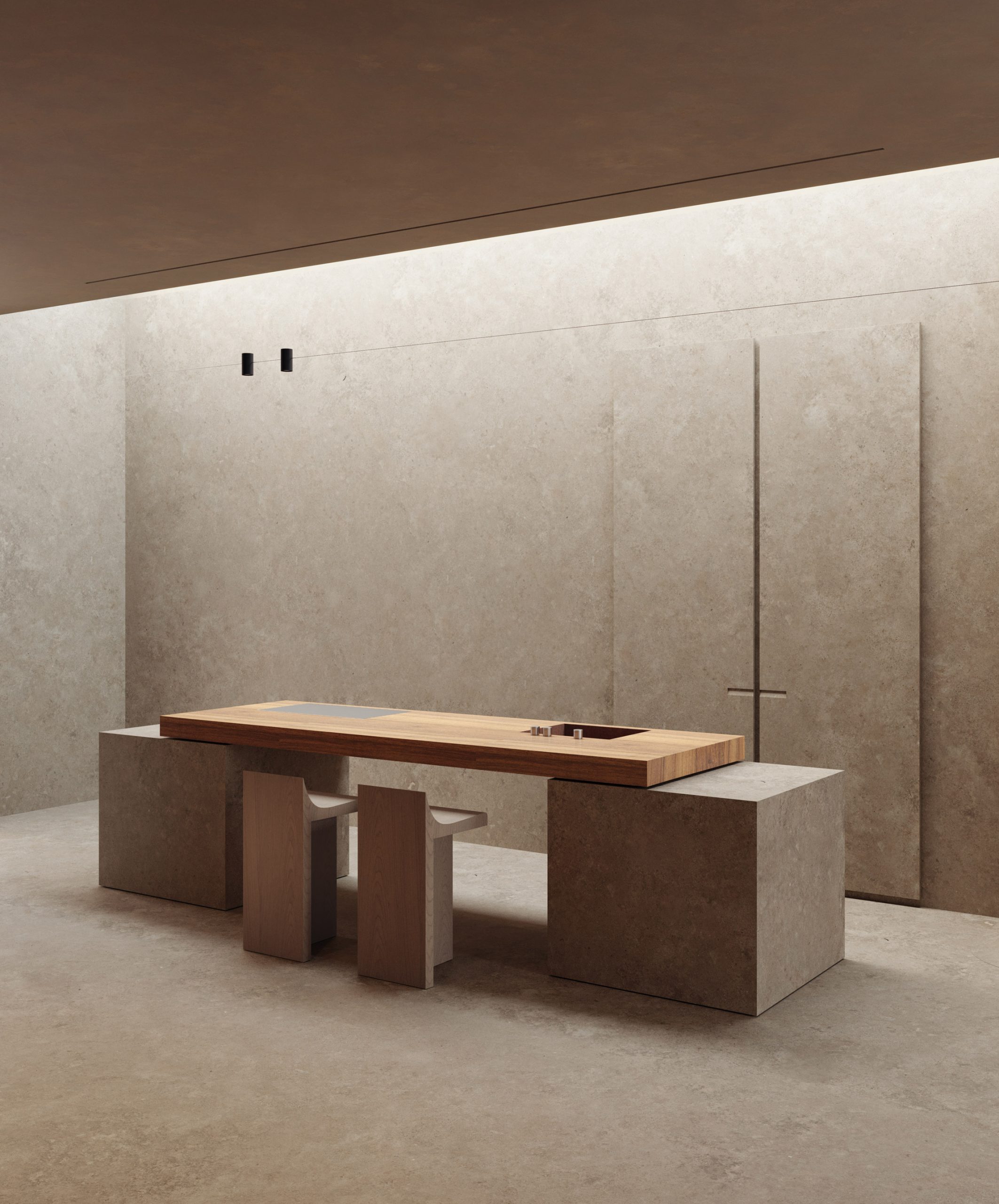 The pandemic has encouraged several architects and designers to turn to the medium of renderings and imagine getaway destinations.

Siblings Mary and David Javit imagined Sonora Art Village, a community of rainbow-coloured houses in Mexico where people could head to escape “grey reality”. Inspired by the vivid architecture of figures like Luis Barragan and Ricardo Boffil, the houses would be surrounded by cacti and swimming pools.

Child Studio also imagined Casa Plenaire, a blissful seaside villa where those in lockdown could picture enjoying the “perfect holiday”.